Stephan and I went for a walk to get the cows from the back of the farm for a stint on the other side of the road again.  We got most of them to the corner of one of the paddocks and suddenly half a dozen of them decided to leave and run off back over the river and away!  I was blearily trying to see through the sight disturbance of the onset of a migraine headache, so didn't feel much like going to a great deal of bother to get them back, so we walked 17 of the 36 in the mob, forward.

We thought we'd possibly pick up some others on the way, but they seemed reluctant to leave their grazing patches, so we left them where they were and moved the others over onto the hill paddock. 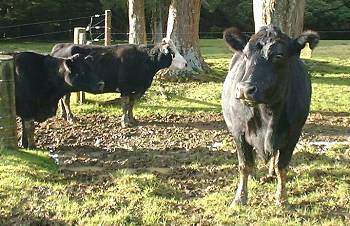 This is Taurikura Ranu 589, wondering exactly where I want her to go next.  She's one of the better-conditioned cows at present, since she had no calf last year and was in good condition coming out of last season. 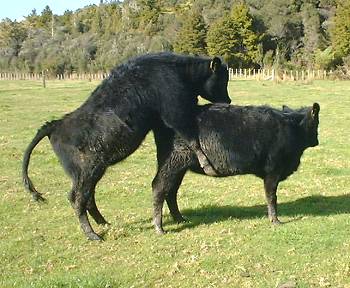 These are two of the R1 (Rising one year) heifers, having a great old time together.  Both are on heat and spent the day mounting each other.  I have seen most of the mob of eleven heifers in season over the last few months and presume the others will either start soon, or have been a little less obvious about it.  One of them has been cycling since she was about four months old!

No wonder I can rarely find all my cows at the moment!  These three were sitting on the wrong side of our boundary fence, as if they hadn't a care in the world! 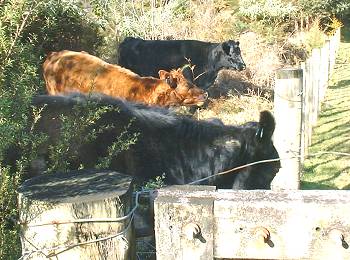 The red one is #94 who has been out in this area three times, and this time she's taken one of the older cows and Virago Isis 06 AB!  I'm not sure that I want my valuable stud cattle being led astray by their wicked commercial herd-mates! 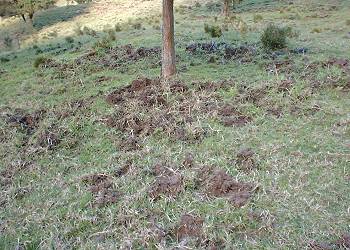 Evidence that it's high time we invited some keen pig-hunters to come and visit!  There are huge areas like this in this paddock, obviously quite fresh, from the last night or two.  I'm not sure how many pigs it would take to do this much rooting in a night and I wonder what the cows think of them while they're here!

This is a quiet time of year in terms of news!  We've been doing things around the house and garden and I've tended to go out to check animals later in the afternoon, by which stage the light is not awfully good for photographs.

In April this year, I bought some wool on an internet auction!  I had a very nice pattern for a baby's shawl which I was eager to knit - NO, we are not a breeding pair!  This evening, I finished it. 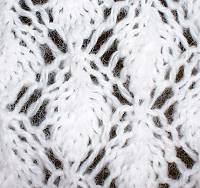 I'm pretty pleased with the finished product and will probably knit another, since it was a nice pattern to work.  At some time I'll find the right baby around which to wrap it.

Some of the ewes are looking extremely rotund!  Yvette, in particular, is developing her udder earlier than I expected, although I am aware that it may just be more noticeable this year, since they were shorn so late in their pregnancies.
She really is fat! - She has a very rounded rump and shoulders, which is not usual, nor particularly wise at this time of year.  Overly fat animals can have problems during birth and the presence of so much fat indicates that they've been getting more feed than I meant them to have and if they suddenly go short during this cold snap, we could have problems with metabolic disorders.  Then again, all may be well and they'll have more multiple births than usual and milk extraordinarily well and we'll have huge lambs by the end of the year! 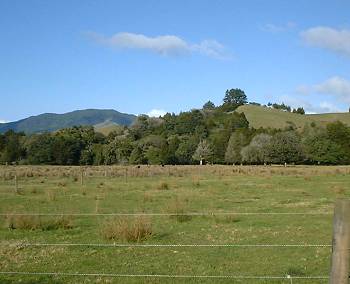 The weather continues to be mostly showery and cool, but last evening was our coldest yet.  That's not bad going for wintertime, since July is usually the coldest month.  But when the sun is out, it's quite glorious ... until the next shower. 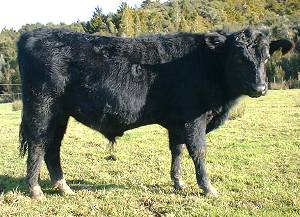 Virago Arran 20 AB, Isla's son, currently living with the "skinny heifer" mob, hopefully learning some manners from his paddock-mates before he has a small breeding mob of his own at the end of the year.

He continues to change shape, looking a bit leaner now than earlier in the year, as he grows bigger and also contends with less feed of lower quality during the winter.

Here they are, the "skinny heifers", having their bale of hay for the evening.  They're not that skinny, really, but I wanted to look after them a bit more closely than the other pregnant animals. 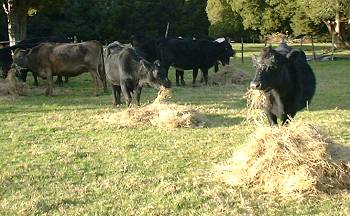 Three of this mob are first-time-calvers, three are the heifers which were young first-calvers last year and the seventh is 348 who calved as a 2-year-old and again last year and was looking really good until just after weaning her second calf, when she suddenly dropped in condition.  I drafted her out of the cow mob so I could keep a close eye on her and provide a slightly better feed level than the other cows are getting. 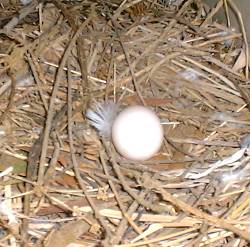 Our two little pigeons have matured.  I've been quite convinced of one's being male since quite early on and because Neil, from whom we obtained them as chicks, had insisted that the other was actually the male and that we had a pair, I just continued to assume they were both male.  But it would seem not and they are as I initially thought.

We have acknowledged their application, at left, to start a family, pending final approval.  I'm not sure how long we have at our disposal to think about this - we shall see if they produce any more.

It's nearly time to begin the Isla Calving Date Competition again and I'm looking for inspiration in regard to the prize we will offer this year.  If you have any ideas, please email them to me!