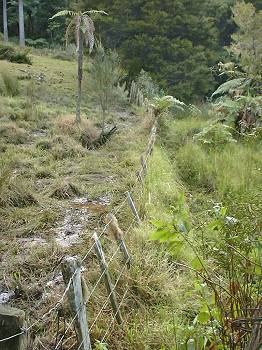 A troublesome issue with which we've been dealing for a number of years, is the intrusion of our neighbours' cattle via the boundary fence.  Boundary fencing is a source of all sorts of disagreements on farms, since the law is inadequate and unclear.  Common sense would suggest that one be obliged to fence one's own stock in, rather than other stock out (imagine if the neighbours wanted to keep elephants!) and that one would not put troublesome animals, like bulls, on boundaries which are neither secure nor within sight for most of the time!

A few years ago, after yet another visit from a bull, one part of the fence was renovated by Stephan and the other party, but for some reason, this piece wasn't done - it was presumably in much better condition at that time.  Since then on our side, things have appeared a bit shoddy, but still stock-proof.  However on the other side the swamp had gradually built up against the fence, so the fence was only about knee high relative to the ground level, providing little challenge to any animal determined to cross it.

In the way that one can become stuck in a pointless mindset, we had done nothing about the fence, since our cattle couldn't get over it and we kept thinking "they should fix it!"  But the other day, two stray heifers appeared when I was in the middle of mustering the young cattle to come in to the yards for the vet's visit.  Because I'm trying to maintain a closed grazing system, that situation is completely unsatisfactory.

It's all a bit silly really, since it took less than half a day's work to chip away the tangle of Kikuyu grass on our side, lift the fence up and re-strain the wires. 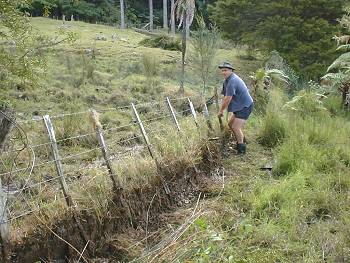 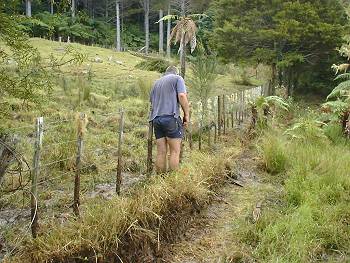 The fence is now ordinarily stock-proof in both directions, however I will be extremely unhappy if a bull starts living on the other side of it again!  I doubt it would hold up to the determined attempts by such an animal to access a hot heifer on this side.

Within my own system, I never put bulls and non-pregnant heifers next to each other, no matter how good the fencing: it's just tempting fate.  I'd also never put my bulls away on a boundary fence where there might be stock I don't know about on the other side!  Why do other people not consider that the only reasonable behaviour?

Our first cold day!  A little worrying, since we've still not had significant rain and our usual autumn grass growth has not occurred.

Three heifers, which have been grazing neighbour William's place, are booked on a truck to the works tomorrow, so we needed to get them back to our yards.  We met William and set up some electric tapes to act as a lane from the paddock to the road fence and herded our seven cattle and his four little jersey-cross calves out and along to the yards.  I weighed and drenched the eight animals which would go back up the road, then we all walked them back there. 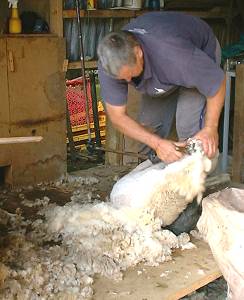 We've sold six of our ewes, after advertising in a local paper.  Three people expressed strong interest, then simply ceased contact, which made it rather trying.  Have people always been so rude?  Eventually I made firm arrangements with a woman who lives within 20 minutes' drive and she came and chose which of the sheep she would have, including Matilda and Lulu, so she has some quiet and maize-addicted sheep to lead the other four wherever she wants them to go.  Stephan shore them for her and today we drenched all the sheep, except for four which will probably have to become a food-source in the very near future.
We'll deliver the sold sheep in a day or two.

I watched with a sense of stunned horror this evening, television reports of the receipt by Prime Minister Helen Clark, of a letter alleging the release of Foot and Mouth Disease (FMD) on Waiheke Island, near Auckland.  What sort of idiot would do that?

The Government appears to have acted promptly and prudently in notifying all those countries with which we trade, so that they didn't instantly panic and refuse to accept our agricultural exports, before making the news public in this country.

Ministry of Agriculture and Forestry (MAF) vets will be on Waiheke, checking livestock for early signs of the disease, although they believe the letter is probably a hoax.  What a huge hassle for farmers trying to deal with feed shortages as the result of the long dry period and the suddenly cooler weather!  Having to muster all the animals here for TB testing twice in a week is troublesome, let alone having to bring every single one in for monitoring on a 48 hour basis, as will be required on Waiheke for the next two weeks until the vets can be sure there has been no infection.

FMD is a disease we don't have to think about too much, fortunately, being an island nation, but it is something all farmers fear: it would be utterly destructive of our lives as we are accustomed to leading them.  I well remember the awfulness of the reports from Britain four years ago and included on this site a link to the diary of one farmer who had watched his entire breeding herd slaughtered.

The weather still being fine, I decided I'd better get the little bulls drenched.  Young Arran 20, Isla's rising-two-year son, has been with Quadrille (and, more recently, steer 356) since the end of mating, but since Quadrille is now just taking it easy until he leaves the farm and won't have any more animal treatments, it seemed sensible to get Arran into a more actively managed mob.  I tricked him into leaving the paddock (he wasn't going anywhere unless he thought his mates were going too!) and walked him down the lane and in to the paddock with the young bulls and Ivy, then took the whole lot of them in to the yards.  I'm now referring to them as "the boys 'n Ivy" - you'll probably have to say it aloud.

Ivy is pregnant, about which I'm very pleased, as this is the first time since she's produced twins that I've managed to get her in calf during the next mating period to calve again in the following year.  She's in reasonable condition at the moment, having gained a bit of weight since weaning.  I decided that she'd better live with the young bulls this winter, since their feeding needs will be similar. 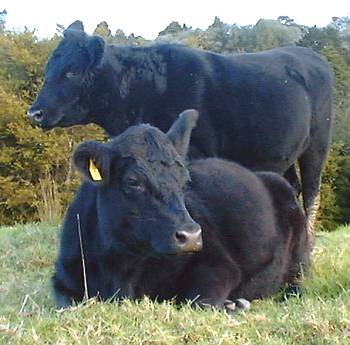 After pregnancy testing the other day, I thought I'd probably end up drafting Ingrid 17 out of the young mob, since she will be the only heifer of her age-group not in calf, and consequently won't need quite the same feed-levels as her contemporaries and would do well enough with the pregnant cow mob.  But every time I see her, she's somewhere quite near Ida 18, her twin.  Social arrangements are important in cattle herds and I'm not sure that I wish to disrupt this pair, since they've spent their entire existences in each other's company, from conception onwards. 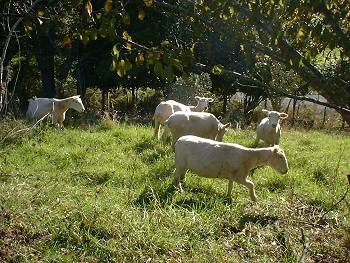 We loaded the six sold sheep into the cage on the back of the ute this afternoon and took them along the road to their new home.

I hoped that this particular Black Friday wouldn't prove unlucky for the farmers of Waiheke and the whole country, being the first day MAF had expected to find any clinical sign of FMD, if it were present.  So far, so good.