Once or twice a year, we have enough wool shorn from the sheep to bale up and sell.  A wool buyer comes to a farm about 27km from here, and we take our wool there to meet him. 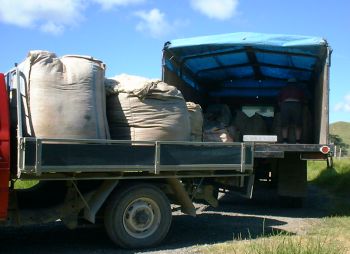 We get different prices for different types of wool: lambs wool, ewe fleece and "bellies and pieces" - the rest.

I suddenly realised, prompted by seeing an advertising sign for the A&P show when driving through Kaitaia yesterday, that I have some organising to do to get to the show this year.  Any cattle going to the show have to have been tested for TB no longer than 12 months before, which meant that I had to organise a test for Abigail.  In the event, I failed to take any pictures, being rather too busy trying to get Abigail to behave properly and have her injection.  TB testing is usually done in the yards so the cattle are restrained while they have the injection under the tail on the first occasion and then have the area checked for reaction three days later.  With only one tame animal to test, going to the yards is rather pointless, so I just put the halter on Abigail and tried to convince her to stand still.

We went out to the back of the farm to move the 94 animals from the biggest paddock, which they had grazed down very well. 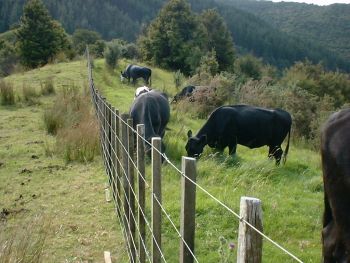 Everybody looked quite happy to be in longer grass again.  Getting them all up the hill proved a little difficult, since the wind kept blowing my calls back into my face!  A dozen of them had wandered down to the bottom gate - the way we'd come into the paddock - and were just sitting waiting there when I went all the way around and down the hill looking for them.  Farming keeps one pretty fit!

On the way up the hill, I walked over the top of a monster and took the picture below, especially for Gisela.  (I've just read something about Arachnophobia and how seriously nasty it is for some people, so in case you can't stand it, the picture is down a bit and if you want to miss it, click here to go further down the page.) 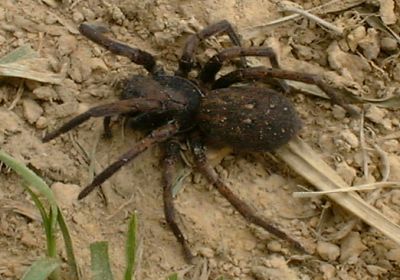 Here's a bit of size comparison: 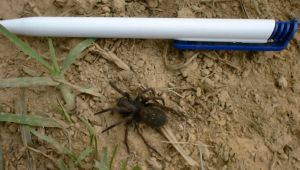 During her stay here, Gisela progressed from screams of blind panic when seeing a spider, to very restrainedly brushing them away if they happened onto her person.

This spider was pretty ill, actually, so wasn't terribly scary.  It wasn't dead, but seemed very stiff and slow.  I wondered if it had been stung by a Mason Bee who hadn't managed to carry it off.

DON'T SCROLL UP IF YOU DON'T WANT TO SEE THE SPIDER!

Stephan and Erika finally got around to having their "Cheesecake Bake-off" today, so six of us gathered together to eat too much cheesecake, with liqueur on the side. 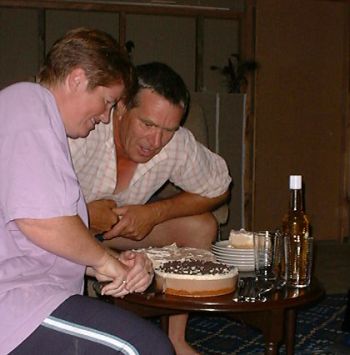 We haven't had much rain for a few weeks, apart from the odd few drops on a couple of days.  Today we had a whole 11mm!  Enough to make a few puddles on the ground, and to give the grass a decent wetting. 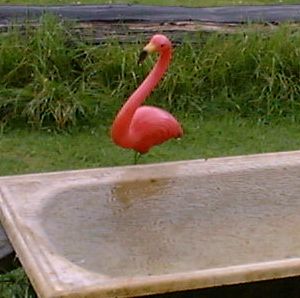 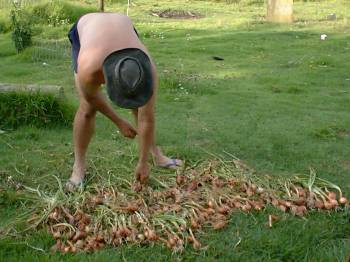 Oh well, I guess a bunch of Shallots is probably better than a bunch of flowers.  Especially if the grower, harvester and bringer is also the chef, who will deliver them unto me for weeks or months to come, in various tasty dishes!

Abigail had her TB test area checked today and of course is clear.  Now I just have to send in the TB forms with the entry form for the show, organise her truck ride to town for next Saturday and do lots and lots of leading practise!  I've been hosing her down while she's tide up to a post and she's not too keen on it.  She seems to be responding in the same way as last year to being led, i.e. sometimes she's fantastic and then she suddenly gets fed up with the idea and lets me know it.  The thing of which I'm acutely aware, is that she's now significantly heavier than she was at this time last year, so I have to be pretty careful about the relative position of our feet!

Whilst demonstrating to someone how one can use any picture from the internet for one's screen backgrounds today, it occured to me (having used the Haruru Falls shot from last week as the example) that the pictures aren't so great when they're enlarged to fill the screen.  If you'd like a better copy of any of the photographs, for private use, please ask.  If you want them for any other use, feel free to ask that too.