Bringing hot cows in has become slightly less difficult since I moved Crispin out of the house paddock after I took the three yearling heifers away from him.  He's worked out that he can jump over an electric tape and I definitely didn't want him to start experimenting with the fences!  There is, in this paddock, a shorter distance along which he has through-the-fence access to cows moving along the lanes.

With these two animals, is one of the little stud bulls, who wouldn't be deterred from accompanying them to the yards.  He's somewhere in the picture, rather obscured by one of the larger animals. 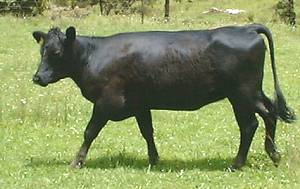 This is 430, the internally-injured heifer.  She appears quite well, and is behaving very cooperatively when I need to get her into the yards for her treatments.

I am regularly contacted by people who are searching the internet for information on raising young Putangitangi (Paradise Ducks).  At the end of September, Tanya emailed from Auckland, having found a duckling near Ngaiotonga on the east coast of Northland.  We exchanged a few messages and she and her family successfully raised their new feathered friend.

Earlier this month, Tanya wrote again to say that they'd tried to release their duck, named Ngaio, at Ngaiotonga, but that she had refused to be left!  Tanya felt that Auckland wouldn't be quite the place for a young duck to begin her adult life and was looking for a more appropriate home for her.  Naturally I suggested that I might know of just such a place ...

Today, while we were preparing to have some lunch, we heard a voice calling out from the front of the house and discovered Tanya, in the company of her parents and son, Jack, with Ngaio in the back of the vehicle, ready to commence her new, independent life here.  We hadn't quite expected her, but were delighted! 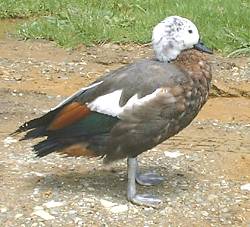 Ngaio seemed quite happy to stay quietly where we all were and so Tanya caught her for a last cuddle with her and Jack before they went on their way. 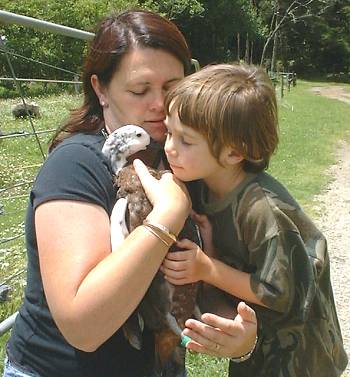 I let young Ngaio out of her cage this morning, and then herded her up toward the house, rather than letting her get used to living on the driveway!  After a while she flew off into our first flats paddock and was soon joined by a young male duck!  They seemed to get on quite well together and he flew back with her to stand around closer to the house. 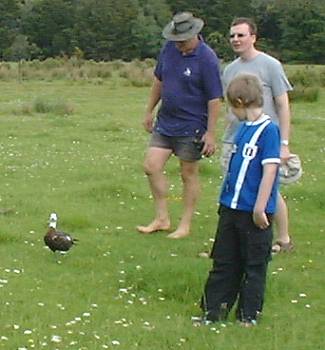 We had visitors this afternoon: Mike, Chantelle, Eric, Stuart and Patrick, who have just moved to Aotearoa from England.  Mike and I have been corresponding by email for some months, after he discovered the website.  It was lovely to finally meet them all in person.

We all went for a walk, joined quite readily by Ngaio, who left her new boyfriend to entertain himself for a while.  This was quite special for Stephan and I, thinking of our other friend, rather like Ngaio, who used to come walking with us. 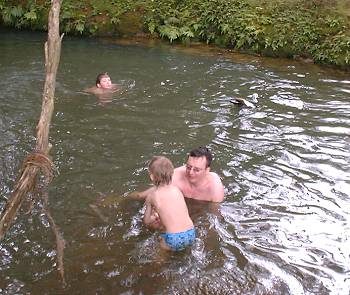 The children wanted to swim, so we took them over to the water-hole and they and Mike swam, joined again by Ngaio, who looked rather alarmed by the fairly fast current in some parts of the river.

All the sheep have gone to visit the neighbours!  The grass is very long which isn't really what sheep most efficiently feed upon, but they'll get it down and make the place look like a lawn. 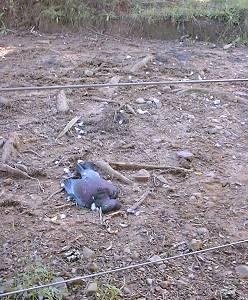 We were astonished to find another dead Kukupa (wood pigeon) on the track today, quite near to where the last one was found, for exactly the same reason: death by flying into fence wire.
I have no idea why this is suddenly happening; after all, the fence has been there for a couple of years and we've not seen dead birds until recently.  I can only guess that perhaps they were young birds, inexperienced and unlucky in their choice of flight-path. 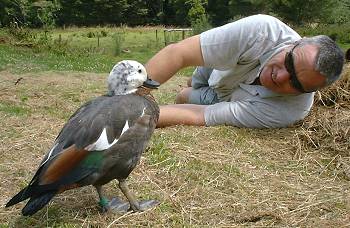 Stephan seems to have a strange affinity with Putangitangi - Paradise Ducks.  Ngaio flew down onto the grass in front of our house, so we went out to have a bit of a chat to her and get to know her a little better.

Later in the day, our expected young guests, Christine and Matthew, arrived.  They are my cousins, and have been promised a farm holiday from the city for a very long time. 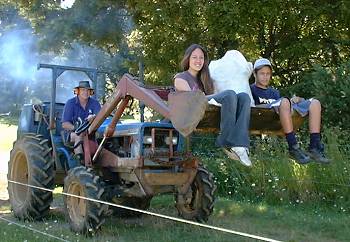 We put the youngsters to work!  Because Stephan and I were so sick during the early part of the summer, he didn't get out to spray the ragwort at the start of the necessary time, so it's starting to get too far ahead of us again.  Matthew, Christine and I therefore took cutting tools and bags and went out to cut yellow flowers and, more particularly, those which had progressed to seeding.  Cutting the flowers off buys us a bit more time to spray them with herbicide, before they get to the point of setting seed again.
Let me just politely say that some people lasted longer at the task than others. 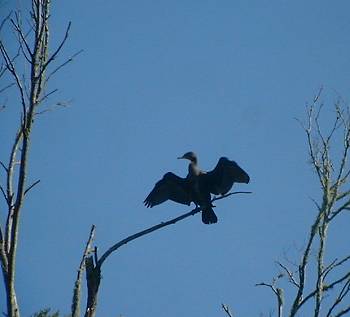 As the young people were getting comfortable on the front of the tractor, we noticed this large bird drying her wings in a nearby dead tree.  She is a Shag, or Cormorant.

My sisters, Rachel and Jude, and Jude's children, Stella and Jasper, arrived yesterday afternoon.  Stella came on the "cow walk" this morning, to see if any of them were on heat and in need of insemination.  Isla was sitting quietly, chewing her cud, so Stella and I went and stroked her.  A little later, on our way back from checking the cattle in the next paddock, Stella fed Isla some Puriri leaves I'd picked for her - quite a brave thing for a very small girl to do, bearing in mind the relative size of the great black creature making a bee-line for that yummy treat! 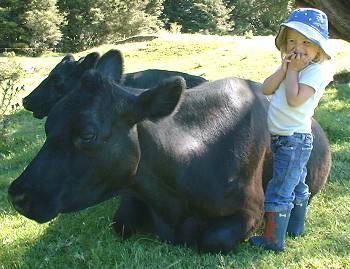 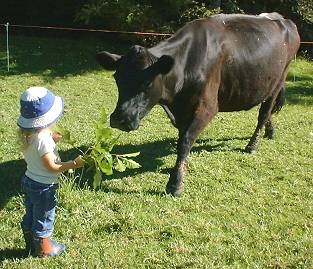 Lots of people spent a lot of time cleaning and organising things ready for tomorrow's party: there are suddenly a lot of homeless spiders around here! 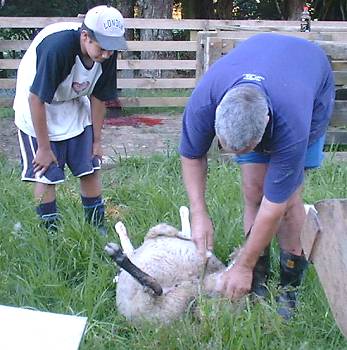 Stephan, Christine, Matthew and I went next door to bring the sheep in so we could select which two would go on tomorrow's spit.  Then, while Christine and I put the rest of them back in the paddock they'd come from, Matthew watched with great fascination while Stephan slaughtered the chosen two and then skinned and prepared them to hang overnight. 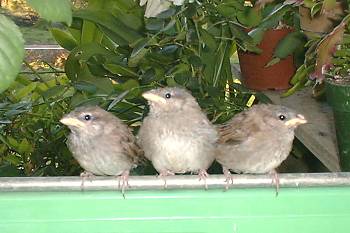 The three little sparrows I rescued last week spent several days in a cardboard box, until they all flew out - fortunately while the cat was out!  I decided they'd better move to my greenhouse, where they'd be a bit safer and have room to fly around.  Here they all are, lined up for their next feed ...