In September last year, I was brought a Puriri seedling of about three feet in height, which I planted in a lovely pot Jill and Bruce gave me for my Birthday.  It took six weeks to recover from the trauma of the move, and then grew, taking up more and more space in my green-house.  For many weeks, we have intended to take it out and plant it in the specially fenced area at the top of one of the flat paddocks and today, we actually did it!  (The Puriri and a Cabbage Tree are on the back of the ute in the picture below.)

On the way there, we cut the Kikuyu which had grown very long around Cattin's Puriri tree, which is, since the winds in February, much shorter than when it was first planted.  I'll have to go back and actually poison some of the grass, to prevent it strangling the tree. 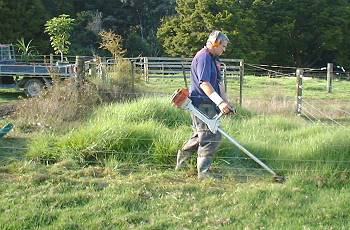 Together we planted the Puriri and then the beautifully grown Cabbage Tree, also from my green-house, and erected some wind-break material around both, to protect them from the prevailing South Westerly winds. 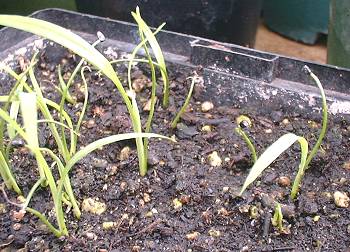 In my green-house, where I grow all my trees, there are some Tī Kōuka - Cabbage Tree seedlings in various stages of germination, from seeds collected a few weeks ago.

The seeds, which can still be seen still attached to the first emergent green shoot of some of the seedlings, are about 3mm at most (about 1/8 inch) and quite easy to grow.  In a couple of weeks, I'll prick these seedlings out into individual pots and before very long, they'll be as big as the one we planted out yesterday and one day as large as the one I featured two weeks ago.

A bit of book-work this morning, in preparation for the vet's visit tomorrow to do the pregnancy testing of the cows.  This visit is rather like an assessment of my management of the cows over the past few months.  There are 51 cows and heifers to check and I'll be particularly interested to find out about two or three of them in particular - one has been on heat three times since mating, which suggests she's not in calf.  I say suggests, because in some cases cows will appear to continue to cycle even when pregnant - Onix, for instance, does so, so she too will be especially marked on my list tomorrow.  Another of interest is one of the stud cows, who had several chances at pregnancy during the mating season, but is of great interest to the bull calves which are still with those cows, every three weeks.  I am mentally preparing myself for the decisions which must be made about cows which are unreliably fertile.

We brought the required cattle in to the yards this morning, in a constant rainy drizzle.  By the time Lloyd, the vet, was due to arrive, the weather had cleared a little and was just a bit damp.  I carefully stashed the camera, in a plastic bag to keep it dry and clean, under the cat-walk and completely forgot to take photographs until all the interesting bits were finished.  So, here's Lloyd, cleaning up after taking off his plastic glove and apron... 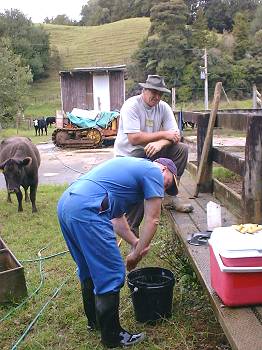 The chilli-bin in the foreground, contains the Leptospirosis vaccine, which we injected into the necks of the heifer and bull calves, as well as one steer which had missed out on his booster shot last year, so needed to begin the vaccination process again this year.  In another month, Lloyd will return to administer the Lepto vaccine to all of the cattle on the farm.  The second injection for the young animals will be their booster shot, after the sensitiser dose today.

I presented 51 cows and heifers for pregnancy testing, where Lloyd inserted his hand and arm into the rectum of each cow, to palpate the uterus and determine the presence (or absence) of pregnancy.  There were five "empty", including #363 who has obviously quite recently lost her calf.  Two were cows, and two were heifers.  The two animals I had already wondered about were empty, as well as a couple of surprises.  That's an eight percent empty rate (since 363 had been pregnant), which isn't too bad.

On some farms the empty cows and heifers would be culled (sent off to the works) but I'm still a bit softer than that.  I tend to allow one more chance, since there are many things which might cause a cow to have missed getting in calf, some of which may have been contributed to by my management, rather than the animal's fertility.  If any of these animals fails to get in calf ever again in her life, she'll be off.

I went for the first time, to watch Stephan and the other cast members of the upcoming play (Wednesday to Come by Renée) and to take some photographs for the production's publicity. 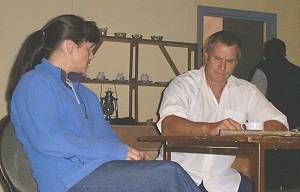 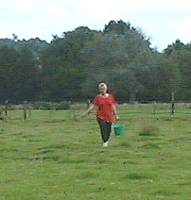 I've been sowing short rotation rye grass over the Kikuyu grass, then letting the cows in to both graze off the Kikuyu and press the seed into the ground.

The seed germinates within a few days and will provide necessary feed in this paddock in the early spring, for the lambing ewes.  That at least is my hope!