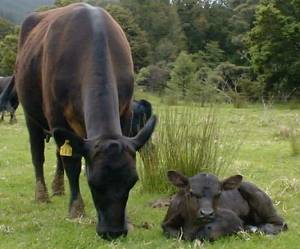 #348 and her calf, beginning to look a bit better.  The calf is very stiff in her hips, which I suppose is to be expected after being pulled into the world with such force.  She's probably quite sore.

Here is an example of the usual way in which walks around the farm are conduckted... 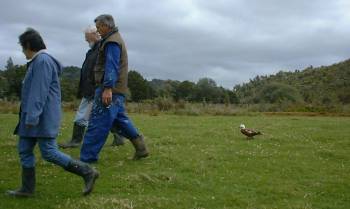 Generally speaking, if two or more people go walking around the farm, the duck will fly out to join them and will then usually return home on foot.  Often she won't fly at all, so will just trot along behind, for the whole trip.  She's quite hilarious to watch.

I was asked, a number of weeks ago, by a site-visitor from North America, how we house our animals.  For those who are not familiar with the system here, the answer is, generally, we do not.  The climate is so mild, especially here in the north of the country, that housing isn't particularly necessary, although I'm sure if we were to provide some, the animals would definitely use it during heavy rain and in the winter winds.  We can get away with not having any, so we do.
On this farm we do at least have trees as good shelter in most of the paddocks, under which the animals will be found when it rains hard, or is very hot.

I went away to the big city (Auckland), so can't tell you anything about the farm, except that Stephan said everything was fine and that the weather was finally a bit warmer, so perhaps the grass would start to grow.  He also told me that he spent three hours hunting for cow number 8 who was listed in my notebook, but which he couldn't find when he went to move the mob.  I had to admit to having forgotten to note which animals didn't have, or had lost, their ear-tags.  I know that #8 is Abigail, Isla's daughter and that she's never had a tag.  I just forgot to write it in the book.  Woops.  (Sorry, mate, I hope you enjoyed the walk!)