Today was that most special day in the year of a small community: Show day! The North Hokianga isn't exactly our community, but it's one we have many links with and is not that far away, being just over the hill (and around a lot of corners). Neither of us had been to this show before, so we decided to go and have a look and to join in a little as well.

So we got up sort of early-ish and got ourselves ready. Stephan had already made lots of blackberry jelly and tomato chutney, so all he had left to do was throw together some scones. This picture has been "touched up" to protect the sensibilities of viewers. The naked chef has nothing on Stephan! Stephan has nothing on!

I took two knitted jerseys on their second outings to a show. I've submitted both to the Kaitaia show on separate occasions and thought it would be interesting to put them in front of a judge, together, to see which might be thought the better of the two.

We drove over the Mangamuka Gorge and across to Broadwood (the location of the show) and paid the 20c fee for each of our "indoor" entries and then went for a look around.
The show seemed much smaller than the Kaitaia one, but much better organised and somehow busier than Kaitaia.

There was horse jumping... 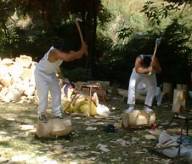 and the obligatory ferris wheel...

But the most interesting part of the day for us was watching the beef cattle judging. We've only one week before the Mangonui County A&P Show (the Kaitaia one) and most of the people who show their cattle go to the Broadwood show and then on to the Kaitaia one the following week, so this was our chance to get a preview of the competition. We could have taken our cows to Broadwood as well, but didn't think about the possibility early enough to get it organised - maybe next year.

The "Cow with calf at foot" class above and below, the "best heifer calf" class.

These are the two events in which we've entered Isla and her calf, in the Kaitaia show.

After lunch time we went back to the hall to check out how our entries in the "indoor" section had done. 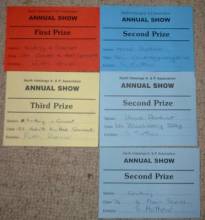 Stephan won 2nd prize in every entry; the scones, jelly and chutney.

My jerseys, which were the only two entries in their class, 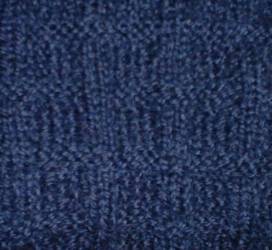 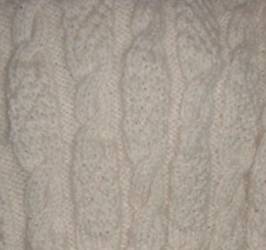 The seemingly odd placings in the knitting occur when the judge considers the item has too many faults to be awarded the prize it might logically get. I had entered the white jersey despite having worn it a couple of times, for which it lost points. The judge, with whom I spoke later, said that there were also a couple of technical faults in the garment. That does not detract from the delight I felt in it receiving first placing at the Kaitaia show a couple of years ago, but I guess I'll just have to give it away now.
Between us we made a huge profit of $1.50 in prize money.

Back in April last year, we realised that our culvert bridge, the main entrance to the farm, was under threat of being washed out by any of the next few floods. That would strand two households and occasionally a large number of cattle, on the other side of a river we'd need to cross.
We initially thought we'd get some good packing-down metal (crushed rock) and compress it so that it would form a "deck" on the bridge and would stay put during the floods. But, as we progressed, we realised that just wasn't something which was going to work, so we then quickly organised the delivery of some sturdy concrete, bought some reinforcing steel to go in the concrete and three of us put it all together the next day. 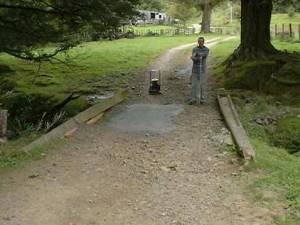 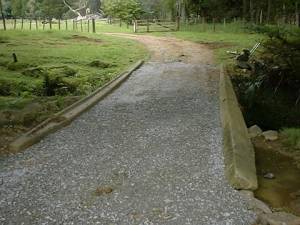 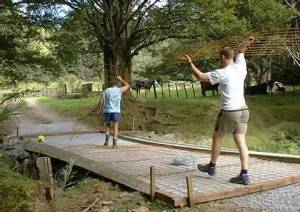 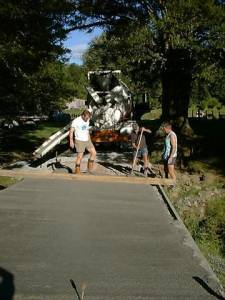 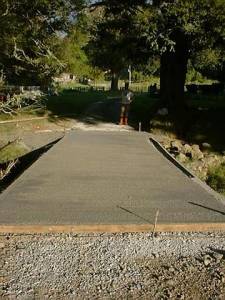 Then it really rained, as it had been forecast to do and the water flowed over our new concrete pad for hours and left it all exactly where we'd put it!
However.......beneath it all, during the many floods over the next few months, some serious undermining happened. There was a hole, under the water, which led to a space up in the bank, which with every flood, was getting bigger and bigger, so that a tall person could actually crawl into it yesterday to start inserting rocks. So, three tall people (Stephan and fabulous nephews Mathew and Simon) spent the day mixing concrete and creating the beginnings of a couple of river-bank walls, which will firstly stop the water from gettting in where it oughtn't and then permanently, we hope, hold the bank together. 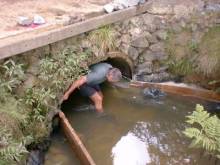 The river bank was cleared of bits of wood and anything unrocklike and the boxing was put in place. The concrete had to be mixed so that it would set in the water, since there was no way we could have created a dry working space. 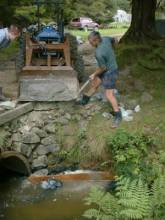 It seemed a lot of concrete was going in and for a long time there was no difference to see above the water, but, eventually the "wall" started to appear. 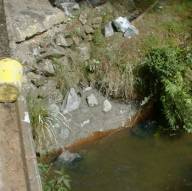 This is now the base of what will be a lead-in wall for the water going into the culvert pipe. 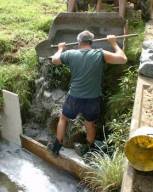 Doing the same thing on the other side.

No doubt there'll be more to do as we see what the water does around our concrete additions. Hopefully we have time to get it all finished before the next flood, but as floods can happen absolutely any time, we'll just have to wait (and work) and see.

While the bridge fixing was happening, Raewyn spent some time on the bank upstream, hoping to catch the monster of the deep which I've seen from time to time, gliding back and forth under the bridge and heard, flopping back into the river at night after catching the latest chicken, lamb or calf for its dinner (must have eaten something huge to be so big!). 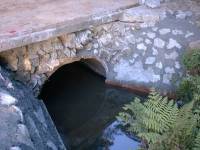 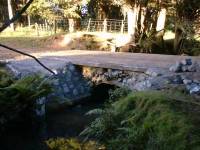 By the end of Wednesday, this was the situation, all looking good and ready to cope with whatever the rainfall might be. But of course, that was only the beginning of the repair.
Next came the big cut, into that lovely four-inch-thick concrete pad we'd so carefully laid. 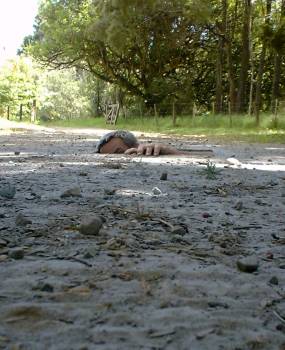 Meanwhile, many of our friends are being made ready for the A&P show in Kaitaia on Saturday. I think we've found young Abigail, Isla and the others a ride in on a truck. We are now taking five cattle: Abigail & Isla, one of the commercial cows and her calf and a yearling heifer. The entries in the beef competition are apparently down on other years, so we thought we'd take a few more animals along.

The huge blue jersey is coming out for another go at winning the top prize (an item cannot reenter competition if it has previously won a first prize at the Kaitaia show, but having only made second last year, this new improved version of the same jersey is going back in for a "resit").

The scone recipe has been back out on the bench again (I couldn't face any more naked chef cover-ups so on this occasion I've only allowed a view of the hands and the beer can to identify the artist). 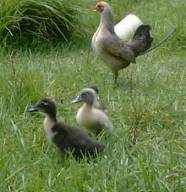 This bantam and her ducklings will have to be caught and caged to spend Saturday at the show in the "Small Animal Pavillion" along with the another bantam and her chicken chicks and a third, under which I've just (on Thursday afternoon) installed three Guinea Fowl chicks from up the road (Guinea fowl are terrible mums and these babes had been deserted by theirs).

This is a little bit of the setup from last year's show...

Stephan shore a sheep every hour or so, for the entertainment of anyone who wanted to watch. 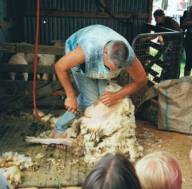 The shed in which we do this small animal show, was completely packed with people at times during the day, looking at the various chicken breeds, little chicks, ducklings, kunekune piglets, lambs etc. Despite living in a rural area, some people who live around here have very little contact with the animals which are farmed near them.