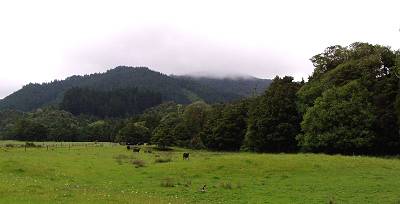 The hills have been shrouded in cloud for most of the past week, although we've not had any real rain since Tuesday.  This is quite extraordinary, since we're not very far above sea level here. 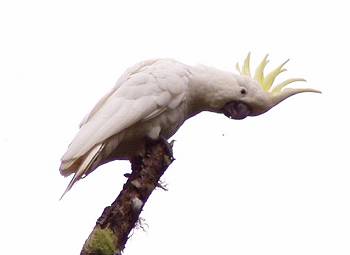 I was sitting in my office this morning when I heard an extraordinary noise and looking out of the window saw four huge white birds fly around the end of the house paddock.  I dashed outside to see what they were.  They'd landed in the trees down by the bridge, so I grabbed the camera.

They were four Sulphur-crested Cockatoos, which perched up in the trees for about half an hour, pulling bits of dead wood off branches and preening themselves.  I've seen them before, but not for about three or four years.  William from next door asked if I'd seen them a few months ago when he did, so they must be around here, even when we don't see them. 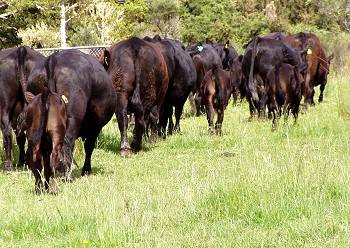 The cows' rear ends are a very satisfactory sight this year: they're in better condition this spring than they have been for the last three years!  A combination of early weaning last autumn, a warm, reasonably dry winter, and a comfortable spring - along with the presence of our newly sown grasses - have all meant the cows calved in good condition and most of them have maintained it through early lactation.

I am hopeful that they will consequently all cycle early, so I can begin mating earlier than last year and pull the calving period back by a week next year.

I weighed and drenched (for Liver Fluke and intestinal worms) the yearling heifers this afternoon, along with Demelza 21 and 456, the two two-year-olds with them.
I usually use 320kg as my cut-off point for mating for the yearlings and most of them exceeded that, those under weight being over 290kg, so still above the recommended first mating weights for their breed.  I'll risk it, although I'll keep the smaller heifers in the insemination mob so they don't have to cope with the physical presence of the bull!  The four going to the bull will be mated by Arran 20, since I know he produces nicely shaped calves for easy calving.

The weather forecast for today predicted a cloudy day, so I brought the remaining untagged calves to the yards and began weighing them.  I have a recycled roll-on deodorant bottle filled with paint, with which I made a mark on each calf as I weighed it, so it could be matched up with its mother once released.  After weighing, and back out in the larger yard, I determined which calf belonged to which cow and thus which tag number it would receive and then Stephan joined me to assist by doing the vaccinating, tagging and castrations (by rubber ring application).

The day turned out to be blisteringly hot and sunny, all day!  Fortunately we have large trees around the yards, so even though the cattle are yarded in the sun during some of the process, they're soon able to seek comfort in the shade.

The other two jobs I did while the cows were in, was to apply the pour-on drench which most of them have once or twice a year, which targets their intestinal worms and also Liver Fluke, with which we have a problem here; and to apply the heat indicators to the backs of those going to the bulls or into the insemination mob.

Then we drafted the cows and their calves into three mobs: one for each bull and one of the insemination and cull cows.  The bulls had been hanging around in the lane all day, after busting a fence in probable boredom, so we put them out with the cows straight away.  Arran 20 went straight to work, nose stuck under the tail of a cow as she walked up the lane, but #26 went into his paddock of cows and coyly stood, not quite sure what to do next!  The cows eventually wandered up the paddock and checked him out and then it was all on.  Well, nothing terribly exciting happened, since none of them were on heat, but he acquainted himself with most of them quite quickly.

Having put the cattle where they needed to be for the night, we went out for a family barbecue, during which I nearly fell asleep, after such a long day's work!

We collected the semen storage bank this morning, so it's now in its little fridge for the summer, which will slow down the evaporation of the liquid nitrogen it contains.  I'm hoping the semen I've bought this year will be delivered on Monday or Tuesday and that it will get here before any of the cows need it! 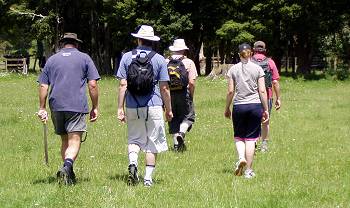 Stephan organised a walk for some of the people who've expressed an interest in going up to see where our water comes from.  Alan, Mike, Miriam and Jonathan came out this morning and at around 11.40am they set off for the hills.

We didn't find out what was in the back-packs, but I have a suspicion one of them had sensible things like a raincoat and lunch, but that another was more alcoholic in content!

About six hours later Miriam and Alan reappeared, soon followed by the others, all of them collapsing in the garden and needing to be refreshed with all sorts of beverages. 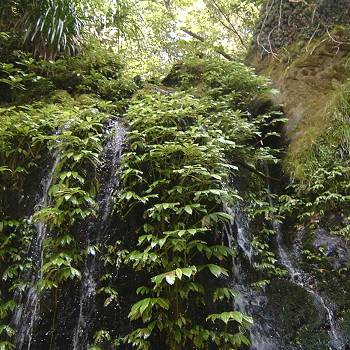 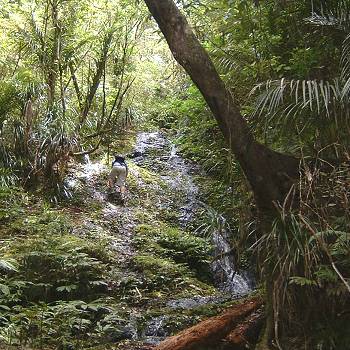 Mike took his camera and provided the photos above.  The source of the river was a couple of still pools where a spring emerges.  There must be springs all the way down the hill, because the water didn't appear to be flowing at the start, but the volume steadily increases down stream.

While they were all off in the bush, I spent another day in the yards, weighing calves and cows, drenching and sticking things on the backs of the cows, then drafting them into the three mobs we'd created yesterday.

A bloke named Scott arrived early this morning with the semen I had ordered - good timing, since there is a heifer on heat! 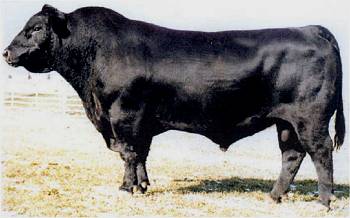 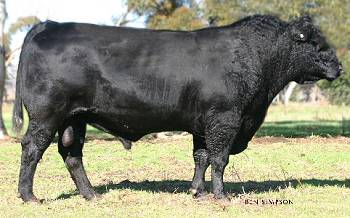 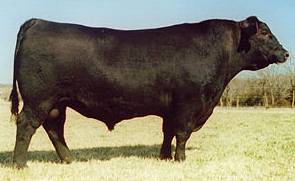 (The pictures have been borrowed from Samen NZ, from whom I bought the straws.)  The three bulls are, above left, C A Future Direction 5321 and above right, his son Ardrossan Connection X15.  The third bull is L T 598 Bando 9074, a bull about which I've no more information than that provided in the catalogue and via the Australasian Angus databases, but he has reasonable calving ease figures, along with a low birthweight, so I shall try him over some of the heifers.

Early this year, when Russell Priest was here for the Women in Ag day, he and I looked through the Angus Internet Solutions and in the process he mentioned that he'd seen a couple of the bulls I'd used last year, so I picked his brain again this season.  Russell says he's seen C A Future Direction and that he's structurally excellent and that the stand-out bull he'd seen this year is X15.  Future Direction is apparently now dead, or out of production after injury, so there's limited semen available.  I had three straws left from last year and bought half of the 24 left for sale this year - only $75/straw, which I'll try not to think about when I'm taking them out of the bank!

We've two calves from Future Direction this year, (one heifer and one bull) so I'll be interested to see how they do over the coming months!

There is a new member of my family: welcome to Louie William, son of Jude and Roger, brother of Stella and Jasper!  Jude just popped him out in the middle of the night, with as little fuss as any of my cows; very impressive!  I am now even more frantically knitting the promised shawl!

Here it is, nearly Christmas!  Stephan suddenly realised that if he was going to make his wonderful chocolate fudge, he needed Brazil nuts and there weren't any in the cupboard!  We've been very careful to ensure that we had no need to go into town to the supermarket over these few days, but feeling quite relaxed, decided we'd have a bit of fun and go in this evening (no, we don't have a life and there's not much entertainment around to be had).  But there was hardly anyone there at all!  Astonishing!  They'll all be jostling each other in the aisles tomorrow, crashing trolleys - if they can find one - queuing for hours and blocking the aisles for those who weren't early enough ...