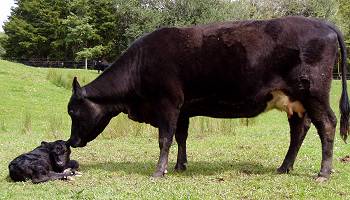 349 produced the first of the insemination-sired calves this morning, this one the son of Boyd Mainstream (who sired Isla's calf last year).  A heifer would have been preferred in this case, since the bull calf will simply be steered and sold because he is not a pedigree calf.

When I took this photo a couple of hours after he was born, I wondered if he'd actually been up on his feet, so went over and got him moving.  From the way he got up I'd say he hadn't actually stood yet.  The other calves have been up within a few minutes of birth. 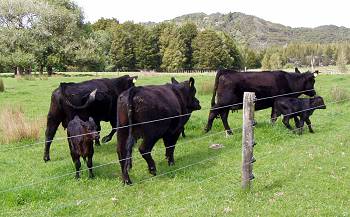 Every year or two we receive notification from some motor "sports" body that our road will be closed and used for a car rally.  We don't have any choice about it, simply being left to live with whatever mess they leave behind them, including metres of plastic ribbon tied around every gate along the road.  (You may be able to tell I view this particular activity with complete disdain!)

Chantelle and Mike brought their boys out to watch from the hill over the road and I went out and talked to the cows, which were quite disturbed by the ridiculous level of noise emanating from some of the vehicles: one in particular sounded like some mad person with a gun travelling down the valley! 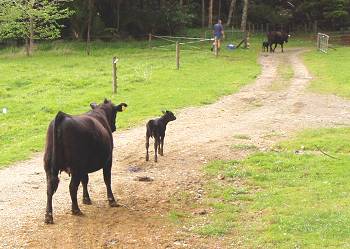 Later in the afternoon I took 428 and 426 and their calves in to the yards to weigh them.  The calves weighed 27 and 27.5kg respectively, so would have been around 25kg when born.

After weighing, I took them out to join 418 and her calf in the Windmill paddock, where 418 has been alone with her calf for several days after being a bit confused by 410's earlier calf confusion.  They all seem to have settled down and now recognise and can find their own calves.  Sometimes that bonding just seems to take a little extra time and management-wise it's a real pain!

423 had her calf this afternoon.  She is still just within the expected calving period for her first mating with Crispin, but I suspect her calf was actually sired by Te Mania Prince, via insemination on a following heat.  Te Mania Prince has a short gestation EBV, so one might expect his calves to be born early and 423 herself was born at 274 days.  This calf's gestation would be 268 days, which while short, is the same as Isla's first pregnancy.  I'll have to see who she looks like as she grows. 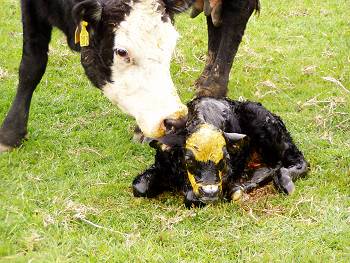 The first white-faced calf of the season, born to 302.  302's mother was 46, probably Hereford X Friesian and her father was Albert, our first Angus bull.  46's udder was of the often-found shape in her type of cow: pendulous with enormous teats and it was because of that that she was eventually culled.  Unfortunately it appears that Albert's genetic contribution to the udders of his daughters has not helped to rectify that conformation, so 302 will go this year too, before her udder causes any serious problems. 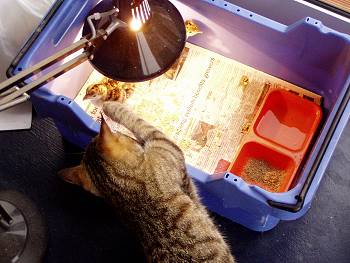 The other day on the discussion forum at www.lifestyleblock.co.nz someone offered some turkey chicks to anyone who could collect them.  After a few emails back and forth, we arranged that he would take them to Jill and Bruce in Whangarei, who would bring them north as far as Mangamuka Bridge, from where we would collect them.  Stephan drove over the gorge road and came back with our three new babies, which Spice found immensely fascinating! 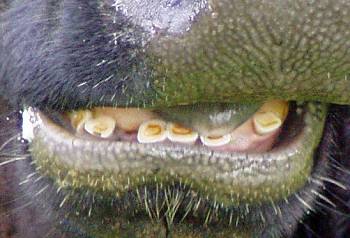 Sybil 808 has lost another tooth!  She's only just ten and lost her first one last year.  This places her firmly on the "must go" cull list for this autumn, when she weans the calf she's currently carrying.  She's grazing with the calved cows at the moment, because she can't cope with short grass, since half of every mouthful slips between her teeth. 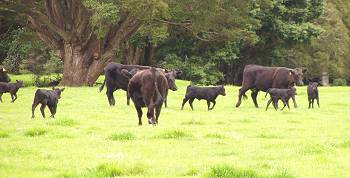 I combined the earliest calved heifers with the three in the Windmill paddock this morning, causing great commotion!  The heifers all fought with each other - fortunately the calves are now old enough to skitter out of the way as their mothers push each other around.  Then they all ran around for a while, trying to catch up with their excited calves and sort out who was whose. 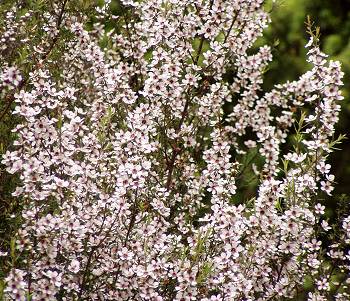 I headed for the back of the farm to check on the cows grazing there - there are a couple whose due dates are approaching, so I wanted to see what their udders were looking like.  On the way out I stopped for half an hour and watched 390 have a heifer calf.

The Manuka and Kanuka are in flower everywhere, looking a smudgy grey in the distance, but up close they're very pretty.  Most are white, but there are several trees with a distinctly pink tinge to their flowers.

For much of the afternoon, three-year-old 416 was pacing her paddock, obviously either in early labour, or getting ready to go.  I kept checking her as the evening progressed, until at 9pm she was producing amniotic fluid but not adopting the usual physical postures associated with labour: when she lay down, she kept her tail tucked around her as a relaxed cow will.  Stephan and I headed her off in to the yards so I could find out what was happening.  Inside were two feet which felt as front feet would, except that the next joint back was a hock (back leg joint), not a front knee!  I don't have any calf-pulling gear since we don't have any need for it except when dealing with breech calves and I'm quite happy to call in the vet to assist with those calvings, since they can be a little trickier than when a calf is the right way around and don't occur very frequently.  Whether or not the vet was happy to be hauled out of bed at 10.30pm or not is another question, but he very quickly arrived on the scene and promptly pulled a very lively heifer calf, which we then left with her mother near the yards for the night, after watching her, like all of her siblings this year, get very quickly to her feet. 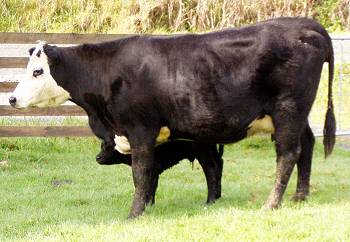 All appears well this morning.  Because there was quite a bit of messing around with 416's insides while chains were applied to the calf's feet and she was manipulated out of her mother, the vet prescribed a course of penicillin for 416, so we put her up in the head-bail, injected it into her neck and put her and the calf into the little paddock next to the yards - she'll have to come in for two more days' treatment, so it's easiest if she's close. 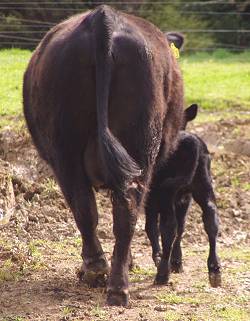 I then went out and fetched 423, who had been in the same paddock as 416 last night, and brought her and her calf in to keep 416 company.

Early this morning 307 produced a bull calf.  She's one of the white-faced cows, but this year's calf is all black.  Her first two bull calves were white-faced and last year's heifer was black. 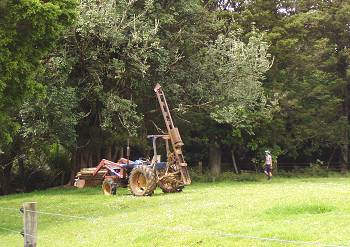 Chantelle came out for a few hours today to help Stephan do some fencing.  There's a triangle in the bottom of our Flat 1 paddock which causes a few problems, being boundaried by a deep drain, the river and an electric fence, with only a very narrow track leading into the area.  It's fine for any other animals than newborn calves and naturally the cows pick that area for calving.  It also contains a Puriri tree which is, like the others, being damaged by stock trampling the roots and chewing on the bark.  There's now a fence running down the rest-of-the-paddock side of the drain, so we'll plant the area out with trees, which will help stabilise the river bank and also protect the Puriri.

The area pictured is adjacent to that triangle, at the bottom of Flat 2, where another Puriri grows within the paddock and needed protection.  The fencing of these two areas means we've fenced all the Puriri on the area we call the flats!  Sponsorship programmes are available for anyone who'd like to "adopt a Puriri"!  It's an expensive business when one looks at the number of trees we need to fence off, but probably only costs in the region of $120 for each tree for materials, which is a bargain for 300-odd years of growth!

While I wasn't looking this afternoon, 371 had a heifer calf, sired by Victoree Scotch Cap.  By 6pm the calf was skipping about the paddock!  371 is full sister of 416 (mother of this year's backwards calf). 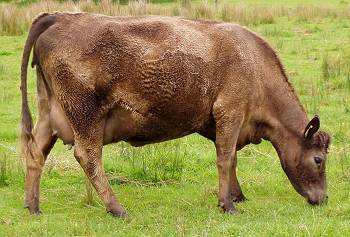 Since 416 and 423 have calved, 443 has been alone.  She could have joined the six remaining uncalved heifers in the paddock next to her, but I thought the probable social uproar wasn't worth risking, since I'm expecting her to calve at any minute - have been for several days! 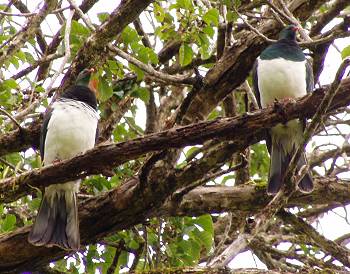 These two beauties were sitting high up in a Puriri tree preening themselves, when I was checking some of the calves this evening.  I like living where one can see endangered birds on a regular basis, just going about their ordinary lives.  They are Kukupa, also known as Kereru, or the Native Wood Pigeon. 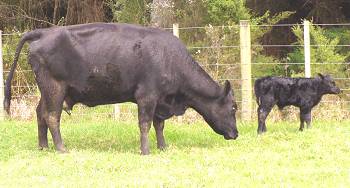 The first stud calf for the year was born early this afternoon.  Taurikura Ranu 589 had another heifer, this one sired by CA Future Direction.  She weighed 31.5kg.  While we were there with the scales we grabbed 112's just-born calf and weighed her too: 40kg!  112 is half Friesian (daughter of old 32, who features in one of the calving pages.

These three ducklings have run miles around the flats at night, as I walk or ride through on my way to check cows and calves.  If their parents just stayed quiet and still, I'd usually not even see them!  It is unusual that there are as few as three in this family; last year they began with eight.