Isla's Calving Date Competition has closed.  You may see the entries (and results when the time comes) HERE!

Taurikura Irene 698 produced a little heifer at 2am - actually I thought I saw all the right bits for it to be a bull and went back to bed with the news that he could be called Virago Meatpacker 35 AB (after his sire, Feltons Meatpacker).  It wasn't until Stephan picked her up to weigh her later in the day, that I noticed he was actually she, weighing a reasonably light 35kg.  Irene is a big cow (weighing around 650kg) so I'm impressed with the relatively small size of her calves! 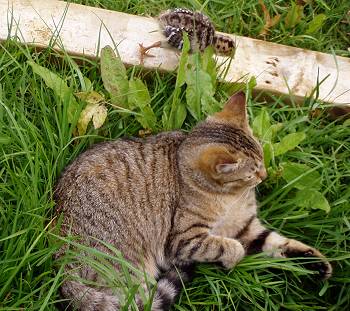 The turkey chicks, after a few days under a heat lamp, needed to spend some time exploring the wider world, so I put them out in the garden.  Spice concentrated on stalking them, but after a few stern words (and a few well-aimed projectiles) she learned to watch without touching and I realised that as long as she was near them, they stopped their infernal peeping.  Then they started following her around if she moved!  They spent hours out there just pecking around wherever Spice lay down.

Later in the day Stephan modified a cage for them and that's where they'll spend their time when I don't want to have to watch them, but they're only quiet if I'm there, or if Spice is on or in the cage.  Unfortunately Spice isn't very happy inside the cage, so that wasn't the best solution.

443, pictured last Thursday, started her labour this afternoon, with her first waters breaking at 6pm, the calf's feet appearing at 7pm and finally giving birth at 8pm, just on dark.  Hers was the longest birth so far in the two-year-old heifers, but she's of quite different breeding from the others, her sire having been Merchiston Playboy.  I thought back to her paternal half-sister Onix's first calving while I watched, reminding myself that she too, took an exceptionally long time with her first birth.

Returning later with the torch to check that all was well, I discovered that the calf looked almost silver in colour! 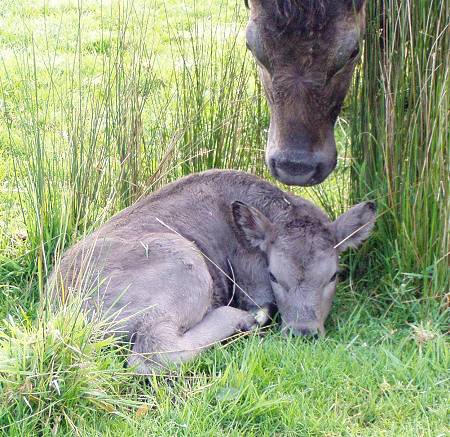 What a delightful looking creature!  She is ¾ Angus with only one of her sixteen great-great-grandparents likely to have been Murray Grey, but that colour just keeps on coming through. 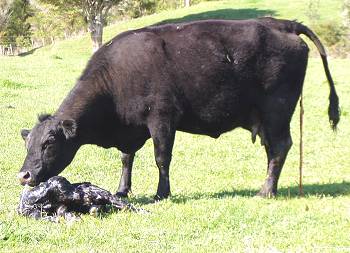 Today turned out to be our biggest calving day this season, with four calves born.  323 had produced a heifer sometime just before dawn, then at 9am 99 (pictured) produced a bull.

Just as I was about to have some lunch, I spotted Abigail across the flats with a fluid-filled bag protruding, so went out immediately to watch her.  The calf's feet were tiny and she appeared to have enough room to open and close her mouth on the way out! 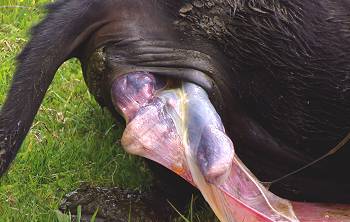 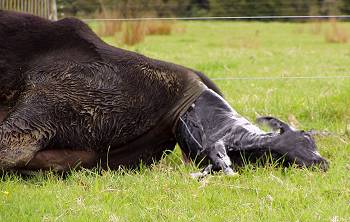 Within an hour of being born, the calf was skipping and running around Abigail.  It's an amazing thing, when you stop to think about it: that that tiny animal was breathing fluid, completely dependent upon her mother's body for everything only an hour before, and suddenly she's on the ground, running around!

I don't actually think about that bit very often while it's happening, since I'm waiting to see that all is well and that the transition is successfully made.  Nearly all of the calvings would happen successfully without my interference or observation, but the 2% loss each year is still one very dead calf and if my being there changes the one thing which determines the life or death of that one calf, it'll make me happier.  Extremely tired, but happier.  I've seen too many little calves lying flat out on the ground where they may well have suffocated in the membranes their mothers didn't clean off their noses in time, and read of cases where calves have dropped from standing mothers, folding their heads under them at an angle which has restricted their breathing for too long.  I've stood back for a while to see what happens in some cases of the latter here, and usually the calf will shake itself into a better position, or the cow will nudge and lick it enough to free it, but sometimes neither happens, so these days I just step in and do what's necessary.

Later on we went out with the scales again and weighed Abigail's calf: 30kg.

All afternoon 120 was looking uncomfortable and by 9.30pm she had developed a keen interest in 371's calf, so I was very pleased to hear and see that she'd finally produced her own calf, a bull, by 10.15pm.

That brings the total to 26, and there are 19 cows left to calve.  There are 10 bulls and 16 heifer calves, so the proportions so far are looking quite similar to last year's where we also had far more heifers than bulls born.

I suspect today may be Ivy's day.  Her udder had swelled noticeably by last night and she's standing around looking uncomfortable this morning.  We shall see ...

Ivy was obviously in the early stages of labour at 1.15am, so I remained outstanding in my field, watching her.  Two and a half hours later she'd not made much obvious progress, so when Stephan got up to go to work, we walked her into the yards and at 4.30am I did an internal check to find out what was happening.  There's one properly presented, alive, reasonably large calf there just waiting to make its entrance into the world, so I've come away to leave her to it for a while.  Whether or not there's another one behind it is yet to be seen! 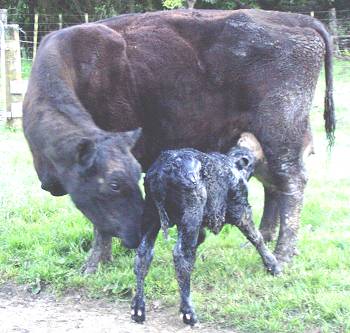 And here he is!  Born just after 6am, probably plopped onto his head on the gravel, since Ivy gives birth to her calves standing up - I didn't actually see the event, since nothing continued to happen while I was there watching.

He looks large enough to have been in there on his own, but I'll keep an eye on Ivy over the next couple of hours.  This is Ivy's first bull calf to be born here, although she has had bulls in the past.

Thank goodness this one is over - now I can get some sleep! 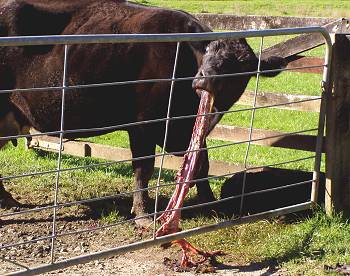 Ivy's afterbirth was soon coming out and then she set about her particular way of eating it.  Most of the cows - if they do eat it, and not all of them will - slurp it up in one huge long, choking piece, often having to cough it back out again and sounding like they might well die in the process!  Ivy deliberately pulls smaller pieces from it and if that doesn't work well, she picks it up and swings it around her head, so that smaller, more manageable bits break off - it doesn't pay to stand too close! 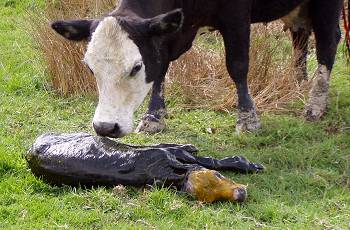 114 delivered another white-faced heifer this afternoon.  (Her first one, #470, appeared on the site's front page for a while earlier in the year.)  She really does have white hair under all that brown gunk!  I was interested to note that 114's birth fluids (having observed her last two calvings) are a revoltingly cloudy greeny-yellow in colour.  Last year I thought her calf must have been dead and rotting, to have produced such a thing.

Now that Ivy had calved, I decided I could run away for a few hours entertainment.  On the 1st of December last year we went to an evening arranged by the Farmers Mutual Group (insurance company) and won dinner for two at the Carrington Club over on the Karikari Peninsula.  The voucher was due to expire on the first of November, so time was getting tight!  We booked and drove the 50 minutes it takes to get there and had a pleasant evening.  The food was good, though not as spectacular as the prices might lead one to expect - I have often thought that chefs sometimes try to be a bit too clever, combining too many flavours in each dish, so the clarity of the flavour of the main ingredient is lost.  The thing our occasional restaurant dining serves to prove, is that much of the finest fare is to be had right here, from the kitchen of my resident chef!

I don't think I'd go out of my way to go there again, but it was fun to try it out for only the cost of getting there.

When I checked the heifers' paddock on our return home, I discovered that Flora 15 had calved - something I wasn't particularly expecting, since her udder wasn't looking at all ready.  She's had a bull calf, sired by Te Mania Prince, a low birthweight bull, so this calf, all being well, will be a fine prospect for someone next year wanting a bull for yearling heifer mating!