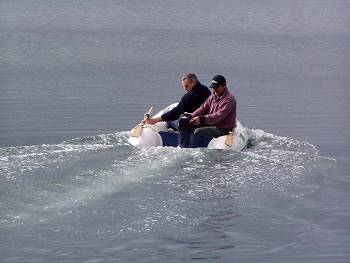 The weather was a bit grey and damp this morning, but we set out to meet up with Roger, with whom we were to catch a lift to Houhora where he keeps his boat.

Stephan volunteered to go with him to fetch the boat from its mooring and bring it back to the jetty to load the fishing gear, Hack (my lovely God-father) and me. 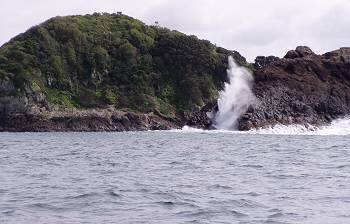 We travelled down to the harbour mouth and then went north towards Rarawa Beach and Henderson Bay.  There were some pretty impressive blow-holes in the rocks and the lovely swell and the height of the tide showed them off very well.  We saw a couple of seals basking on a rock, a few gannets, a penguin, a Moray eel (accidentally caught by Roger) and found no evidence of any fish at all!

We had a lovely day, the scenery was fantastic and it was delightful to be out on the water again, for the first time in years!

On our way home, we bought some fish for dinner.

The fat cow mob, all gathered together for a photograph!  I threw them into this paddock yesterday morning when they finally came down the lane from their last grazing area, and there wasn't time to put them over on Jane's place before we went out for the day.

Yesterday I walked through the Camp paddock (and up the very steep hill) plonking herbicidal granules on ragwort plants, and today I dragged Stephan out with me to chip all the thistles I'd seen, while I wiped some more of the rushes, since those I did three weeks ago are now brown.  Spice came with us and dashed around the paddock, hiding in the clumps of rushes and leaping up the trees.

I was particularly inspired to go out and get on with the job at 1pm, as the National Radio "Wayne's Music" hour began, this week being music from the 80s - he does a different decade each week, from the 20s to the 80s.  I don't think it's called Wayne's Music any more since National Radio seem to have got rid of Wayne Mouat, who's been doing the afternoon weekday radio programme for a very long time.  His knowledge of popular music is encyclopaedic - I remember his voice from my surreptitious radio listening as a teenager when I was supposed to be doing my homework.

Today the trip to Whangarei Hospital.  After the excellent health news we went back to Jill and Bruce's place for something to eat, then headed into town for some relief-induced retail therapy!

Later on our way home, we drove out to collect the back-blade we'd bought by internet auction.  There being nobody around to help, Stephan just applied some of his extraordinary strength and loaded the blade onto the back of the ute. 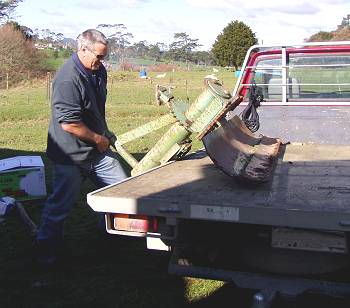 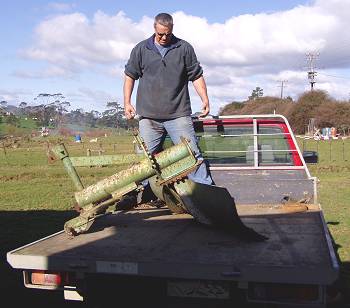 A trip to Kaitaia Hospital today for the follow-up appointment and then we skipped out to the car-park, literally!  It's amazingly uplifting, hearing that your probable life-expectancy is no longer to be measured in countable months.

The weather for days and days has been fine and warm!  This is rather like spring used to be when I was a child.  It's worryingly dry though - how dry I still haven't calculated from the rain records to date.  I'll slot them in here later when I get the records organised.

Today's birthday treat was a bath!  Stephan dragged the old bath out of the garage, where it has been buried under all sorts of things thrown in there over the last couple of years, and set it up down in a sheltered part of the garden near the greenhouse.  He found an old empty molasses drum, rinsed it out and lit a fire underneath it to heat the water.  After a fabulous dinner, the water was nearly boiling, so I gathered candles and book together, and settled in for a two and a half hour soak.  The siphon hose with tap attached to the end enabled me to add as much hot water as I wanted, while eating from the large box of chocolates at my side, enjoying the scent of lavender bath salts all the while.
Actually by the time I was finished, the water in my bath was smelling more of molasses than lavender and was distinctly brown in colour; but it was by no means unpleasant and I very much look forward to repeating the experience.

Stephan and I wandered out the back with thistle chipper and ragwort plonker today, partly going to move the cows, but also with the intention of weed hunting in the Big Back paddock.  There are some patches where there's a lot of Ragwort growing, but much less than we expected to see.  I think the plants will be germinating rather earlier this year than normal, since the weather has been so dry and warm, so I shall keep up the onslaught!

I've been doing quite a bit of trough cleaning over the last few days, partly because I've been able to ride my bike again after staying off it for a few weeks because of a damaged finger, which stopped me operating the clutch for fear of further injury.  The piece of pipe I use to siphon the water from the troughs is rather heavy and awkward to carry around on foot - it also takes so long to get around and I prefer to do several troughs in succession.  Some of them were particularly slimy and had lots of muck at the bottom.  I'm sure the cows will appreciate their cleaner water supplies!

I brought the young heifers and bulls in to the yards during the day to give them all a copper injection and then to redraft the three groups, putting the pregnant heifers all together and the two R2 heifers who aren't pregnant, have joined the R1 heifers; Ivy and the bulls are a little mob of six, on their own again.

I left the pregnant heifers in the small paddock by the yards overnight, since it's flat and reasonably safe, so if they do a bit of fighting and pushing each other around, they shouldn't come to much harm.  There were a few power struggles, but they mostly settled down by dark.  They have of course all spent time together for long periods before now, but they have to sort out who's who again when they've been apart.  This morning I let them chew out the top part of the native tree area near the house, watching frequently to ensure none of them went through the tape and off to find extra nibbles!

There's not a lot of obvious size difference between the two and three year olds in this now-combined mob.  The older heifers suffered some real feed and growth challenges through their first two winters, so I've been making sure I've not similarly challenged them during this winter, while they're pregnant.  I'm fairly confident that the younger heifers have grown to their individual potential and that I've fed them well enough to keep up with their own growth needs, without overfeeding them to fatness and the risk of too-large calves.  The younger heifers have been spending their time on the flats with Ivy and the bulls and I wanted them to spend some time climbing hills before calving, but didn't want to send Ivy too far from where I can easily keep an eye on her, so it seemed sensible to put all the heifers together.