Isla's Calving Date Competition has closed.  You may see the entries (and results when the time comes) HERE!

Quilla 14 (Queenly's second daughter) had a bull calf just after 6.30pm: another for next year's easy-calving bull market!  She has been looking like she was about to calve at any minute for days now.  He's the one pedigree son of Arran 20 this year.  (All his other calves are with the commercial cattle.)

By the time we were ready to weigh yesterday's stud calf, we couldn't catch him!  They're best done quite soon after birth, before they get too fast.  So we had to walk the little mob in to the yards instead, to weigh the calf in the race.

All seemed fine on the way in, but after I'd weighed the other two calves, one of them began to look seriously ill!  Flora 15's bull, born three days ago, had his tongue hanging out and was trembling and wobbling all over the place!  His weight gain has been only 600g/day, which is about half what I'd expect, so I wondered if his mother simply hasn't had sufficient milk for him - her udder was much less engorged than I expected when she calved.  I walked them very slowly back to the house paddock so I could keep an eye on him.

He continued to look dreadful for the next hour, then lay down and spent quite a lot of the next couple of days sleeping.  I think it is quite possible that he is presently undernourished, rather than that there's anything seriously wrong with him, and that a longish walk on a hot afternoon was just a bit beyond his comfortable capacity at this stage.

Tuesday the 1st of November 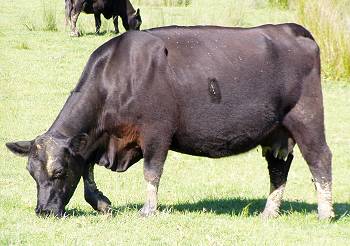 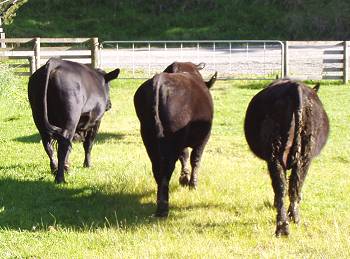 The bulls were standing near the gate across the road from the yards this afternoon, so we brought them over and weighed them. 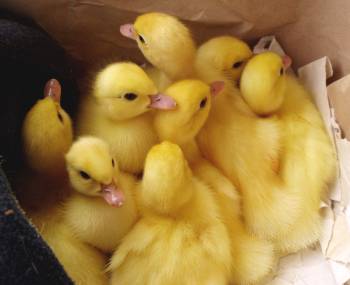 When setting up an electric tape for some cows this afternoon, I was startled by a Muscovy duck, which suddenly appeared from under an old Puriri log in the grass.  Then I heard the little peeping noises of a nest full of ducklings!

Another of the ducks had a family of 10 ducklings last week and Stephan says they've gradually disappeared, and he's found the rest dying around the place over the last couple of days, so I decided to kidnap this lot and ensure they didn't suffer the same drawn-out fate.

It turns out that Chantelle is keen to have these eight, so she'll pick them up in the next couple of days.

By the time Chantelle and the boys turned up to collect the ducklings this afternoon, I'd found another five - some of the rest of the family, I think.  So, Chantelle took eight and I still have five.  It's obviously time to dispose of the Muscovy drakes!