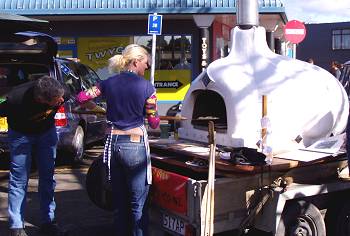 Stephan has been away for a couple of weeks helping my sister Jude and Roger with some work in Auckland and today I went across to Kerikeri, near the Bay of Islands, to collect him from the airport.  Flying him to there was significantly cheaper than any available flight to Kaitaia!

The Kerikeri Farmers' Market happens on a Sunday, so we popped into town for a look.  Stephan wants to build a Pizza oven something like this one, so was really interested to see one in operation.  We bought some very nice organic garlic from Julia and Chris, as well as a bottle of their fabulous garlic sauce.

On the way home I drove us in to Totara North, which is on the Northern side of the Whangaroa Harbour, a place I spent many happy times when I was a child and teenager, with my Father, when we frequently sailed a 28 foot twin keeled yacht from Mangonui to Whangaroa.  Totara North was where we usually came in to fill up with diesel (if we needed it) and to buy food supplies from the small shop.  The picture (at left) is looking across the upper harbour to Whangaroa settlement, and out of view to the left is the harbour mouth and the Western Arm of the harbour, which was where we spent most of our time.  The Western Arm of the harbour is completely unpopulated by people, the only artificial structure there being a tramping hut to which one must walk or travel by boat.  When we stayed there we could hear Kiwi in the bush at night and the fresh water was so clean that we could fill containers from the streams where they came down to the beaches. 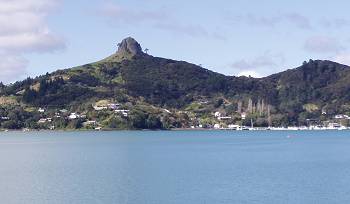 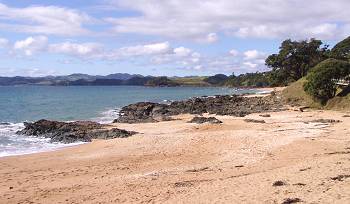 The right-hand picture above is taken from the Northern end of Cable Bay, looking back toward Mangonui.  This is about half an hour north of Totara North.  We stopped at the famous Mangonui Fish Shop to have some lunch, but there were so many people waiting to be fed that we decided we could probably get home in not much more time than we'd spend waiting there, so continued on our way.

Wednesday the 3rd of August 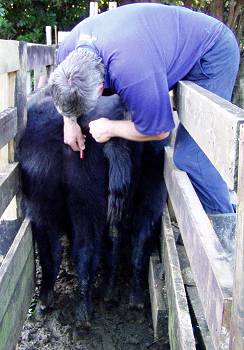 Last time Liz, the vet, was here, I discussed Isla's son, Aidan 27 with her.  He developed diarrhoea when I first moved the little bulls onto some new grass a few months ago and although that has dried up a little in recent weeks, I was still concerned to ensure that there was nothing really serious going on, particularly in regard to BVD (Bovine Viral Diarrhoea) which Liz suggested was a possibility.  I don't think we have it in our cattle, having not had too many abortions nor any deformed or weak calves born on the property, but the herd could be infected during the occasional incursion of other people's cattle onto our property, through the occasional nose-to-nose contact the cattle might have over the boundary fences and apparently via the semen I buy in for mating.  Bearing in mind that these bulls may well be sold for breeding to other farmers, I needed to be sure that they are all clear of both BVD and EBL (Enzootic Bovine Leucosis - a bit like leukaemia in humans), so we needed to do some blood tests.

Most people would get the vet to come and take blood, but Stephan used to be a Brucellosis Testing Technician, so he does it very skillfully! 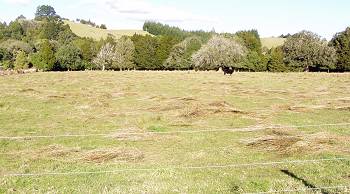 Stephan spent some of yesterday and today felling rushes!  I've been out wiping lots around the flats and we're really starting to see the effects of that determined effort!  But the rushes in the worst paddock were very tall, making wiping them by hand quite a job.  Now I will wipe them as the new growth comes up, which will take a great deal less work and herbicide.

For the first time in years we can see both side fences at once! 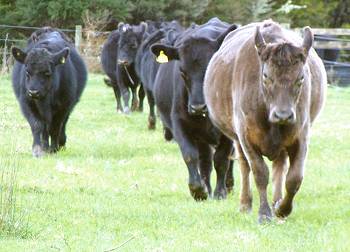 Moving the R2 heifers, the young bulls and Ivy this evening along one of the lanes.  It occurred to me while I was preparing this photograph that my cattle possibly look quite round or even bloated, to people whose cattle are on different pastures.  Kikuyu, being quite fibrous, tends to round them out rather more than rye and clover, which is digested at a much faster rate.

I thought a lot about my lovely friend Katy today.  We met when we were both 12 and at school in Marton in the Manawatu.  We gravitated toward each other primarily perhaps because we were both a year ahead of our contemporaries and suddenly, with my arrival, she was no longer the youngest in the class!  My family only stayed in Marton for that one year before returning to the Far North and Katy and I began a correspondence which we continued into adulthood.

We met up again in our late twenties when Katy lived in Auckland with her partner and I was present at the birth of both of her sons.  Soon after her second child was born, Katy died of a brain cancer.  Katy would have been 40 today, which I find startling - partly because it means I too will soon reach that particular milestone.  Because we had only occasional contact with each other through our transition from children to adults, I think both of us held a picture of ourselves as those two 12-year-olds, on some level, so to be contemplating either of us at this age seems extraordinary.

Spice has started coming out on the farm for walks!  She's not very keen on the cattle because they are curious and chase her, so I pick her up whenever we're near them.  Despite her apparent fascination with water (she'll only drink from her water dish with one foot in it and she gets in the shower regularly) she won't cross the rivers, so I carry her across.  I think it's actually the noise that disturbs her - anything she thinks is hissing at her. 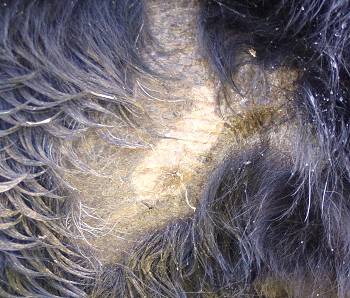 This is the side of the big steer, #356!  At long, long last, the hole in his side has closed over.  It is still just a little weepy, but it looks like he has finally done it!

He's due for a jolly good brushing! 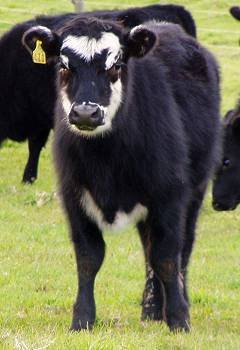 #470, daughter of 114, stands out in her little mob of yearlings, being the only white-faced heifer.

Internet auction listings and those in newspapers often describe cattle as "white-faced" as if it is a self-explanatory breed.  It is not!  A black-bodied, white-faced animal can be a cross between Hereford and Angus, Hereford and Friesian, or any number of other mixes that might originally have involved those breeds.
This heifer's great great grandparents were probably a dairy cow and a Murray Grey or Charolais bull (producing a fine-boned almost white cow), then one generation of Hereford (producing a red bodied, white-faced cow) and two of Angus have produced this lovely creature.

Liz the vet phoned and advised that last week's blood tests on the yearling bulls had all returned negative results, so they are EBL and BVD free!  Excellent!

We headed off to Whangarei for the day for me to attend a Hospital appointment.  I'd spotted a tractor back-blade on an internet auction and made contact to arrange to inspect the blade, which was near Whangarei, so Stephan had a good look on his way home, leaving me in Whangarei for the night on my way down to Auckland for the weekend.

Jill and Bruce (with whom I spent last night) and I set off for Auckland to attend my sister's birthday dinner.  I'd made a few clever arrangements by email earlier in the week, to enable me to attend a ForageMaster workshop in Wellsford on my way down, since I'd missed one in Taipa yesterday.  We arrived in Wellsford just a little before 1pm and I couldn't see much activity where I believed the workshop was to be held, but spotted a Quinphos Fertilizer rep wandering about looking a bit lost, so I jumped out of Jill and Bruce's car and went off with him to find the workshop.

The workshop was very good and I then travelled with the presenter to Auckland, and joined the rest of my family for dinner.