Isla's Calving Date Competition has closed.  You may see the entries HERE!

Isla has calved!
A bull. 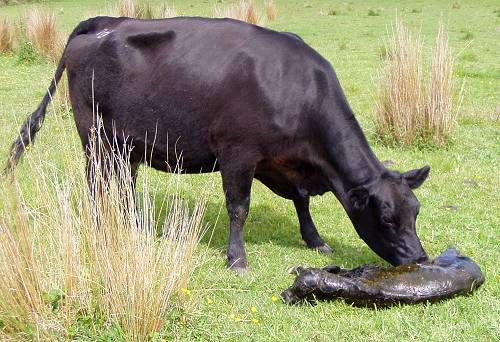 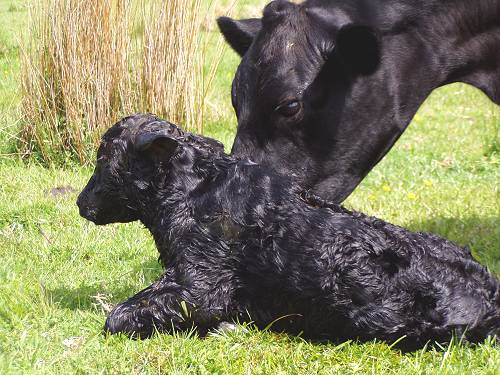 Congratulations Mike from Kaitaia - the only person to guess today's date for the calving.  Mike's wife, Chantelle, was here this morning and came out with me to check on Isla, because I'd noticed her standing in that peculiarly pensive way cows do when in very early labour.  Neither of us realised at the time that today was the day Mike had guessed. 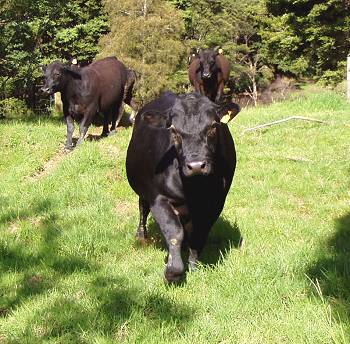 The bulls have been over the road on the hill for a couple of weeks, but the neighbour having rung and told me he wanted to graze his side of the fence, I needed to bring them back.  They came thundering down the hill toward the gate!

Since the weighing scales were set up and the bulls were coming through the yard area, I weighed them again (only a week since the last time) - I'm keeping a close eye on Aidan 27's weight-gain because his rear-end output is still so loose.  He's now up to 389kg, so I think he's probably just fine!  Having been the heaviest of last year's bulls for all their lives, he was overtaken in weight at the end of September by #26, who now weighs 400kg.  #26 is the bull I decided to keep for use in my own herd, since he's unrelated to most of the cows.  His mother is Taurikura Irene 698, one of the last stud cows I bought. 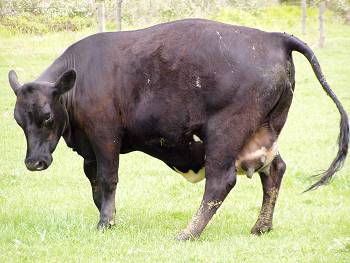 The seventh of the pregnant two-year-old heifers began her labour this morning just after 10.30am.  I've been watching her closely for the last few days (including a couple of checks during last night) and have been interested in the level of swelling under her belly: the main udder vein runs along there and there's often swelling in the days before calving and in the first few days of lactation.  452's sister, 418, was similarly swollen, although most of hers appeared after calving.

452's heifer must have shot out of her mother on the last push (I was fiddling with my suddenly-faulty camera and missed the crucial moment) because when I looked over, the calf was lying with her nose toward the back of her mother, so her back legs must have been flipped over, or slid past, the rest of her body, since she was definitely coming out the right way!

This is the first calf born to any of the two-year-old heifers which was sired by Arran 20.  Early in the mating period last season I was a bit nervous about using him over the yearling heifers, but as time passed, my options were reduced and so those heifers ended up in his mob.  Having seen the size and shape of his calves this year, I'd ceased to worry too much about these heifers, although I'll be pleased when the remaining one has calved. 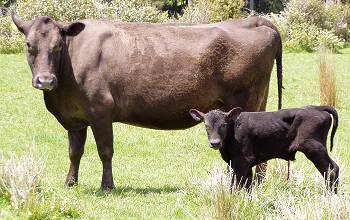 Fuzzy 357 was also in labour and calved just a couple of minutes before 452.  This is her third calf and both bull calves have had the same short, tightly curled hair as their mother. 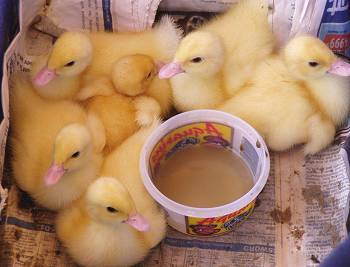 The five large ducklings here are the same age as their smaller sibling.  The only difference is that the small one remained with its mother and the lack of food, the excessive walking around the paddocks and the cold have taken an obvious toll!

I would have thought that at this time of year there'd be enough insects around to feed baby birds, but apparently not - or their mothers really are as hopeless as they appear! 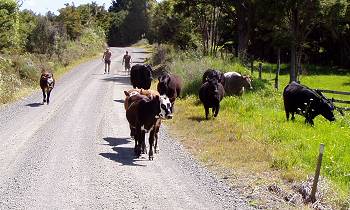 Six of our cattle have been over the road on the property of William and Lisa since early this year.  It has come time to send them off to the works, so we brought ours and their four dairy-cross calves down to the yards to weigh them and to drench the young ones.  The two heifers remained in the yards to wait for a truck to pick them up in the morning and the others all went back to their paddock.  We're just waiting to hear when the steers will go.  The largest of them is the enormous son of #32 (the old Friesian cow which appears in one of the calving pages), now weighing over 840kg!  His younger brother (the calf being born in the above-mentioned page) is also in the mob and weighs over 600kg, for all that he's still very thin-looking.

The heifers are Amelia 16, Isla's second daughter, who I removed from the herd because she just wasn't up to my expectations - the rest of Isla's calves have been splendid animals, but Amelia isn't; the other is #430, who was badly injured by Crispin during mating, late last year.  I decided it would be best not to breed from her, since it is likely she has significant scarring of her cervix which might have prevented pregnancy, or made calving dangerous, difficult or impossible!

I got up early and after a quick breakfast went over to the yards to prepare the heifers to go off on the truck, which was due in half an hour ... The heifers were gone!

We consequently had to sort out the requisite paper-work via telephone.  Strictly speaking the truck driver ought not to have taken the animals without the forms which are required to travel with them, but I'm glad he did.

This is the third lot!  Would anyone like some ducklings? 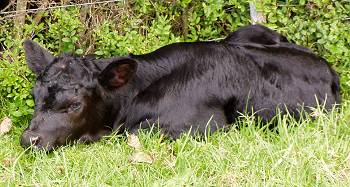 Isla's calf keeps catching me out - he sleeps tucked up in the hollow beside the fence along the bottom of the Flat 1 paddock and can't be seen from a few paces back.  I've turned the fences off along here at the moment, since it became obvious that he was heading in this direction and still a bit wobbly on his feet - the river is just through the fence in some places.