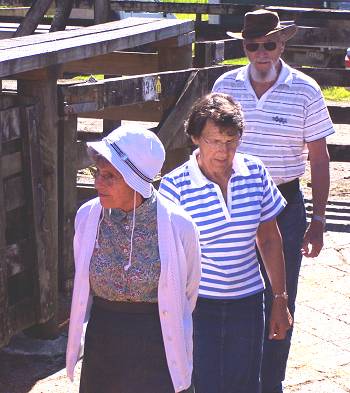 Today was the day of the Broadwood A&P Show.  We wanted to go and Bloo was quite interested in experiencing a local A&P show, so we had arranged to also meet Joy, Jill and Bruce there.  After submitting our various entries to the Indoor Section, we went to watch the cattle judging.  Everything took so long for me on crutches, to which I have had to return over the last few days, having overused my leg the other day.  Stephan eventually fetched the ute and just drove me wherever I wanted to go!

The afternoon's entertainment was unfortunately cut short by a power cut, just as I sat down to watch the shearing, so by the time the others joined me, there was nothing going on at all.

There being nothing much left to do, we headed back to the hall to collect our entries. 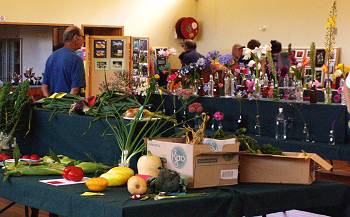 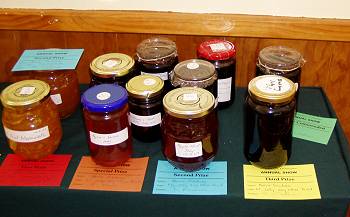 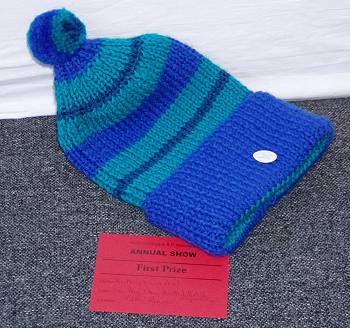 Stephan won a 3rd prize for his delicious Blackberry Jelly - downgraded because he hadn't ensured it stayed upright on the way there and it had air bubbles all through it!  The competition rules say the judges may open jars, but they usually don't, so how they judge some of these things I really don't know!

I entered this hat which I had just finished knitting for my goddaughter, Annie, who lives in Bristol in England.  As it was the single entry in the whole knitted section, it was awarded a first prize certificate.  Reading the Northland Age during the following week, we saw that not only had I achieved this First, but there was a trophy tray of some description also awarded to me as the recipient of the most points in the knitting section!  I have not received any correspondence on this matter.  It's not much of a win when one is the only entrant, but if there's a prize, I want it! 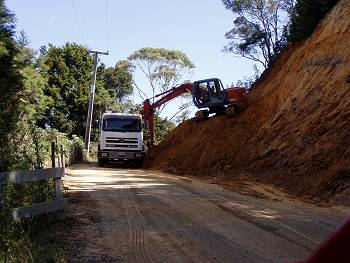 We came home via Waiotehue which cut 20km off our journey, but took just as long.  Waiotehue Road comes through from the Broadwood-Herekino road, to Takahue, which is not very far from us.  The road in places is alarming!  There is a short section where the road appears to perch on the edge of a steep cliff with crumbling rock above and a huge slip below, with no apparent reason why the whole road doesn't just fall away as well!

Coming up Diggers Valley Road, we had to stop and wait for this ...

This is the corner where an unknown idiot slammed sideways into our ute a few months ago.  We suspect the road realignment will simply allow such idiots to go faster and will not contribute much to safety. 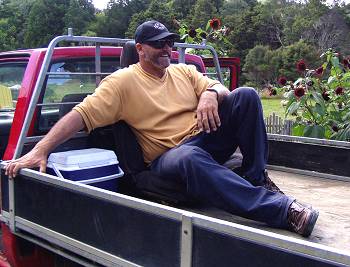 Bloo took the sight-seeing seat on the way home, which he said he had really enjoyed!  Stephan had tied an old car seat to the frame on the back of the ute, so the seat was a firm and comfortable place to sit.  It was getting a bit crowded inside, with two huge blokes and me squashed in between them! 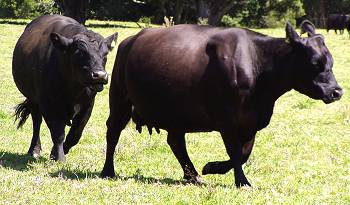 I was combining a couple of cow and calf mobs this morning when I noticed some fertile-looking mucous on the tail of Imagen 33.  She is a 2-yr-old heifer and had a large calf reasonably late in the calving season and I don't want her empty.  After the cows and calves had gone into the neighbouring paddock with the cows and calves which had been with the bull until a couple of days ago, I went and fetched said bull again and put him back in with the mob.
This is the bull following his mother around, just checking if she's of any interest.  Cattle don't care about human incest taboos. 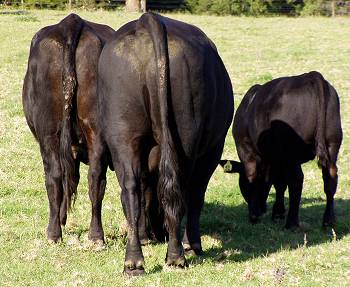 Later on in the day the bull had obviously worked out where the most action was likely to be and stayed with Imagen.  These two are half-siblings by the same sire, so I'm doing a bit of line-breeding in this case.  I hadn't particularly intended to, but #26 was the closest bull and the easiest to draft out of his paddock at the time, with me on my own on one leg and crutches!

The little bull with them is Alex 51, of course, Isla's son. 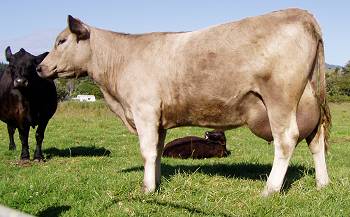 516 is on heat at last.  As you can see, her udder complaint has not resolved itself, but is still not causing her any noticeable discomfort and being on heat is a fair sign of her good health in other respects.  She runs and kicks her heels up at times, so I just continue to watch her carefully.

516 spent the whole day looking towards and calling the bull over in the Windmill paddock with Imagen.  Her incessant mooing became rather trying after a couple of hours! 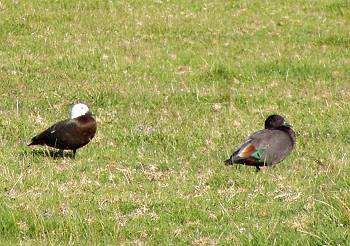 The Paradise Ducks have been gradually returning over the last couple of weeks, after having gone away to moult over the summer.  It's nice to see them back.

The bull having done his job, I sneakily tricked him down a one-way-path to somewhere else this afternoon, while moving the cows he was with.  I put him in with the other couple of bulls today, since, on crutches, the prospect of trying to draft him back in with the ones he was with yesterday was impractical.

I did a bit of cattle recombination this morning, putting the 67-head mob of cows and calves together with the rest to form a 98-head mob!  I don't very often have them in such large groups.  The two mobs had spent the night on either side of a fence, sharing a trough, and when I combined them, it was in a paddock full of lush grass, so the social-order rearrangement fights were kept to a minimum.  I had Bloo's video camera with me while out there, so one day, when I have a computer with a DVD drive on it, I'll be able to do something about providing some moving pictures for those interested.

I also recombined the bulls which resulted in a bit of pushing around between a couple of them, but was, on the whole, a quiet affair.  In the picture are the five bulls, cow #363 who remains with them and in the distance, the large mob of cows and calves in Flat 5. 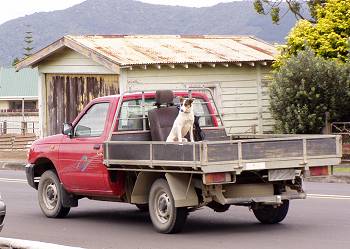 Stephan took Bloo up to the airport this morning and he flew away, and we went in to Kaitaia this afternoon to collect Joy from the bus, upon which she'd travelled from Whangarei.  We put Jenny on the back of the ute for a drive, since we were really just going in and home again and she very comically decided that the seat on the back must have been put there entirely for her benefit.  I watched her going past a couple of times as I sat on a park-bench and waited for Joy's bus, while Stephan did a couple of things around town.

Joy and I went to town and had lunch together.  Later in the evening we went back in again to play with the Orchestra.  Joy has played viola for many years, and plays violin far better than I, so it was fun to take her with me to join in. 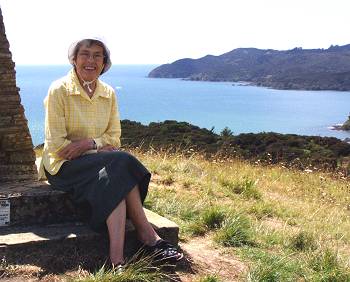 Today Joy and I went on a tiki-tour around my family's old haunts, because Joy said she knew the names of the places in which Jill had lived throughout her life in this area, but had never been to any of them to put them in some sort of context.  We travelled across to the east coast via the Fairburn Road, with a detour up Kohumaru Road to the property upon which my mother farmed dairy goats for a couple of years.  We continued on down to Taipa, along through Cable Bay, into Heretaunga Crescent, in which we lived in two houses over a number of years, in one of which Joy and Jill's parents came to stay in 1973.  Then we looked at what used to be the Pamir Motel and Restaurant and went for a short "walk" (a bit difficult on crutches in the sand) on Coopers Beach and then on up to Rangikapiti Pa, one of the best lookout points over the whole of Doubtless Bay and the surrounding district. 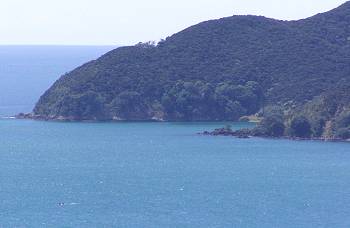 This is Shag Point (over Joy's left shoulder, above) and Goldminers' Bay.  Goldminers' was one of our favourite haunts when I was a child and my Father and I (and sometimes the whole family) would go sailing around Doubtless Bay on his 28-foot twin-keeled yacht.  We often stayed overnight in Goldminers' Bay, or lunched on the beach if we were just out for the day.

Now there's a big house up on the hill and the view is, to my eyes of years past, ruined.  I do not agree with the sort of progress which buys one person a great new view but spoils the old view for everybody else.

Joy took us out to dinner at the Beachcomber Restaurant this evening, which we all very much enjoyed.  She was delightedly surprised to find an establishment of such quality in such a small town.