This heron 'floated' gracefully down from the tall trees by the river, to puddle about in the very wet little patch in the House Paddock this afternoon.  It was a little too far away to get a very clear photo.

What looks like grass is ankle-deep in water when one walks across it.

I slept in a little this morning, fortunately being woken at 8am by a very loud knock on the door.  Jim, from down the road, was going pig hunting and wanted to let me know he might be on our place at some stage.

The fortunate part of being woken was that I then had a look out the window, saw Dotty standing up the end of the paddock and through the binoculars, saw she had some membrane hanging from her vulva.  For some reason I hadn't got the lambing kit all prepared, despite knowing lambing was on the verge of starting, so had to dash out and collect the lube and iodine from the front shed, before heading up the paddock to deal with Dotty. 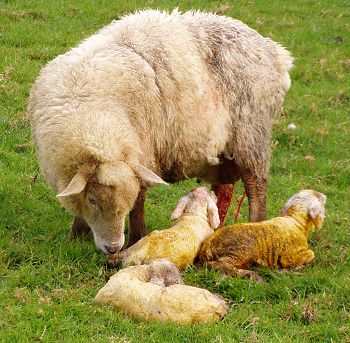 Her first lamb was in full breech position, with its tail and hocks (back knees) presenting when I put my hand in.  I gently felt for the ends of those back legs and drew them, one at a time, out into Dotty's vagina, then, making sure the tail was still between the legs, pulled the lamb out into the light.  It was pretty floppy and still for a few seconds, while I hung it upside-down, then it gasped and stiffened and I laid it at Dotty's head.

The second lamb was presenting correctly, but I figured I'd pull it out while I was there and had Dotty on the ground.  I got it out and put it with the other and went back in to feel for the possible third lamb, which was somewhere down the back, waiting!  It did what they sometimes do: pulled its feet back in every time I grabbed them and tried to pull it out!  Persistence paid off and I got it out and laid it with the others.  I checked again, to make sure that was all there were.  Three wasn't too surprising, in the circumstances, but four would have been.

I am delighted!  I've seen three previous sets of triplets: one lot was premature and dead, the second were all born alive, but only one survived more than a few weeks, and the third was Bendy's family and he was bent.  These three seem a good size and are all pretty lively.  On many farms these days, because of the influence of the Finn breed in particular, multiple lambings have become quite common, but in Romney-based flocks, twins are the normal maximum.  Dotty is of course half Suffolk, half-sibling to Bendy, so perhaps triplets run in that family, or in the breed.

These three, in order of birth, were a ewe, a ram and another ewe.

Dotty is being a fantastic mother, attending to all of her babies equally, always aware of where they are.  I'm very pleased, bearing in mind Dotty's own mother's behaviour in abandoning both Dotty and her elder sister, Lamb, in her first two lambings.  Here's a picture of Dotty when she was small. 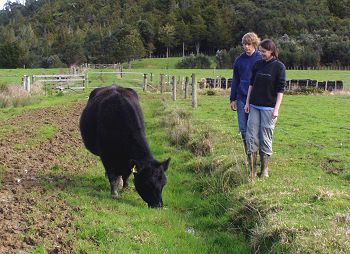 Anna and her friend John, who's here on a visit from Scotland, came to stay for a couple of nights, arriving yesterday afternoon.  We went out for a walk around the farm this morning and brought most of the cows from out the back.  When one of the stragglers appeared in the lane late this afternoon, Anna and John offered to go out and coax her into the paddock with the others.  What I didn't realise, until I saw them taking so very long to do that, was that it was Flora 15, the cow we literally have to push if we want her to go anywhere! 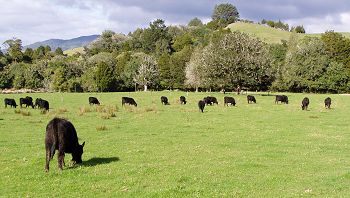 I took Anna and John home this morning.  This afternoon I moved the little heifers, again.  I'm sure the grass has been growing, at last.  It must be the effect of all this glorious sunshine. 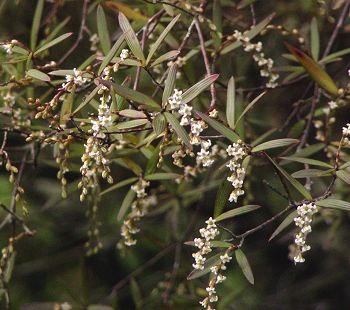 I'm pretty sure this is Mingimingi - Leucopogon fasciculatus - and I noticed it because it is flowering.  I recall seeing this tree and not thinking much about it, except I thought it looked like an odd sort of Kanuka tree; turns out it isn't one at all. 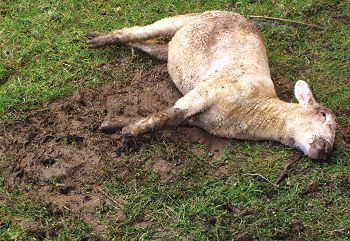 This morning when I let the poultry out I couldn't see any sheep, but because I'd counted all seven in the paddock last evening, didn't worry, thinking they must have been down under the trees at the end of the paddock.  This evening, here was this dead ewe hogget, in sight of the chicken enclosure, so I don't think she was there this morning.  Initially I thought she'd just died after being cast (unable to get up onto her feet) as she's lying down-hill, but she really wasn't there for long enough; something else must have been wrong.  She has obviously pawed the ground quite a bit.  I feel very sad and disappointed; I don't like animals just dying, particularly if there was something I might have done to avoid it. 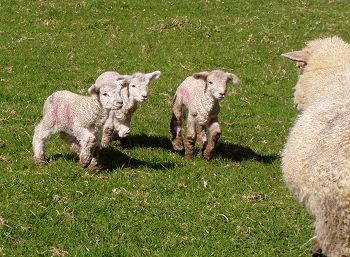 The triplets are doing really well.  I worried about them for the first couple of days and I marked them with raddle so I could tell them apart from a distance and keep an eye on them in case one seemed always on the unfed outer.  They seem to swap around quite happily during feeding, when Dotty moves as she's grazing.  Two will be attached and feeding, but her walking forward by a couple of steps gives the third lamb the opportunity to latch on for its chance of a feed. 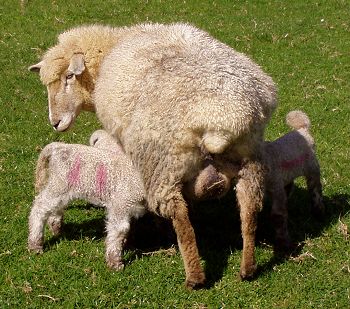 This makes it look like they're all getting fed, but somebody's missing out under there.

Two lambs with a ewe are lovely to watch; three are even more fun. 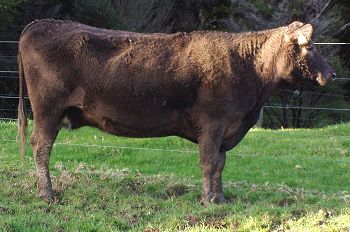 This is 443, who spent most of the winter last year being a companion for Ivy and therefore learning about the sound and taste of feed-nuts.  For the last week or so I've been feeding the ewes some feednuts with a bit of Magnesium Oxide, and 443 has been looking very interested in it all this afternoon!  She's watching the sheep in the House paddock eating their nuts.  The cows have been in the lane and out to the front by the yards, grazing what grass there is there, so they're sort of wandering around at will, almost wherever they like.

In case you don't know, since I've mentioned them several times lately, feed nuts are just pelletized ground grain products, often with a bit of Molasses and minerals thrown in.  These ones are about 1cm in diameter and up to 3cm in length and the cows and sheep really like them!

I started feeding the sheep the nuts and Magnesium because Dotty was getting so slow in her last pregnant days and Babette is now looking a bit doubtful too.  Part of Babette's problem is my own fault: last year she had Mastitis for the second time and we treated her for it and I talked to the vet about giving her a prophylactic dose of the appropriate drug again this year, to see if we could get on top of that problem once and for all.  What I forgot, until after I'd wrestled her to the ground and injected her with a 10ml dose into a muscle, was that I ought to have divided the dose and injected into two places.  I've made her very sore now, for which I am sorry.  While I had her down, the first thing I did was tie a rope around her neck, leaving several feet to drag behind her so I could catch her again today and tomorrow without too much stress for either of us.  I've been checking her regularly to ensure she's not got caught up on anything, nor got it wrapped around her own legs.

After an absence of 16 long days, Stephan finally arrived home this afternoon.  He built a deck, a pergola and two farm fences while he was away.  I'm glad he's home.

Babette had two rather large ram lambs with her by the time I checked this morning, born around 7am.  I'll have to check back, but I suspect this is the first time she's ever lambed without any assistance!

In the early afternoon Stephan and I tipped her over and inspected her udder, finding that the previously infected teat wasn't yielding anything liquid at all and feels hard, all the way down to the teat.  However, the other half of her udder is producing good-looking colostrum, so we made sure both lambs had a feed and left her to it.

She has such a large udder that I hope she'll be able to feed the two of them adequately from one side.  If Dotty can do three lambs on two teats, hopefully Babette can do two on one.

This afternoon the cows all broke into a riverbank area they oughtn't to have been in and when we got them out, I noticed one of the young cows limping very painfully on one of her front feet.  Since they were near the yards, we walked her to them, put her in the head-bail to hold her still and Stephan picked up her foot, finding a four-inch long piece of finger-thick tree branch stuck between her two toes.  Poor thing; it happens from time to time and mostly they manage to shake out whatever gets in there, or dislodge it as they walk around.  I suspect this stick was poking right into the soft skin between her toes, so she wasn't likely to get it out on her own.