The week beginning the 22nd of September 2007.
Saturday the 22nd

Ingrette, as I'm now calling Ingrid's calf, stood for up to 15 minutes at a stretch today.  I just kept going out and standing her up whenever she fell down. 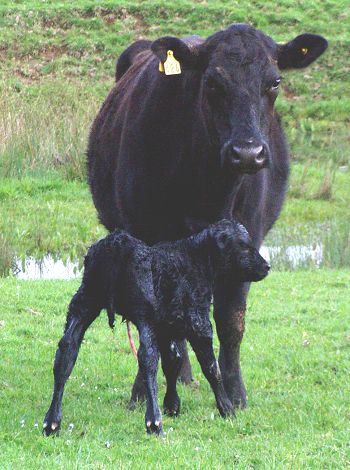 At around 6pm 426 had a heifer calf, the first calf for #43 bull.  She's a surprisingly spindly little thing, considering that her sire was such a monster at birth.  His EBV for birthweight is very moderate, but he was over 46kg at birth.

After working with Ingrette for so long, it was odd to see a calf get up and move around on her own.

Ingrette stood for twice as long at a time this morning and I did quite a bit of exercising of her legs.  She seems to be swinging her tail a lot more than I've previously noticed.  She also managed a few back-leg hops without falling over. 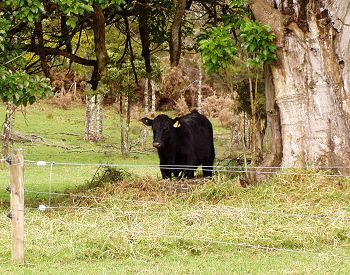 I've had the main electric fence switch turned off for a couple of days while Ingrette has been near the fence around the house - she fell into it the other day and she can't move away from danger, so I thought it would be best to turn the whole lot off.  I forgot that the bulls out in the Mushroom paddock have a habit of then walking into the Puriri reserves and eating all the grass - and then everything else!  That's really not the point of those areas.  #55 was in this one and #47 in another.  Very annoying.

That nice lush green bit was growing rather further down the trunk of the nice new shoot until the bull ate it all. 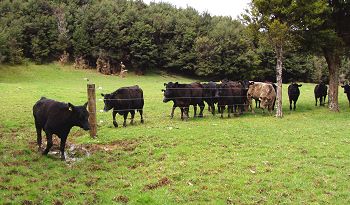 I walked out the back and opened the gate for the little heifers to move to the Back Barn paddock. 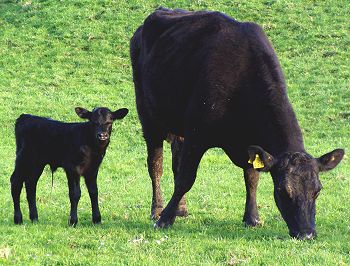 All quiet now, but a few minutes before this picture, I crept up on the sleeping calf to double check her sex and she did as they often do in that situation: bolted in terror!  Why haven't I learnt not to do that?

Stephan went off on a day's pest trapping and I had a frustrating day with the Ingrette.  Maybe she was tired from all the standing yesterday.  She seemed a lot more shaky on her bad leg today.

Looking out at the heifers in the Windmill paddock this morning, I saw a cloud of pollen drift out from the trees.  Every time I see it I think there's a fire!

My copy (or two) of Growing Today arrived in the mail this evening.  I've never been in glossy print before.

Last night there was a horrible rain storm and when I got up and peered out the window, I could see Ingrette flopping around in the mud, trying to stand up and get out of it.  Today in town I bought her a cover.  It's very cold all of a sudden and I think this will help her. 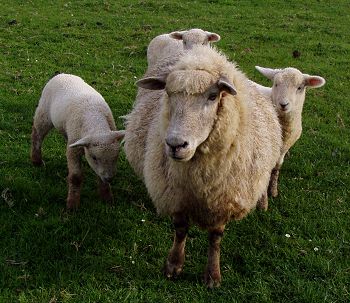 Dotty and her lovely lambs.

I've noticed that Dotty is very thin - not surprising when feeding three lambs so well - so she's now getting some feed-nuts every day to supplement her grazing. 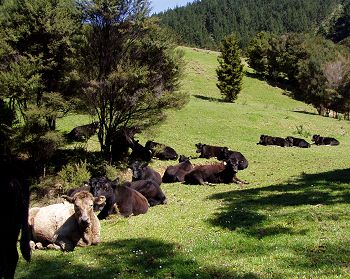 I went for a walk out the back to check the pregnant cows - I'm keeping an eye on them at least every third day, watching for any sudden udder changes which will indicate different calving timing than I'm expecting.  I found them all easily and so headed back through the other side of the farm.  All the yearling heifers were lazing around in the sunshine, looking lovely. 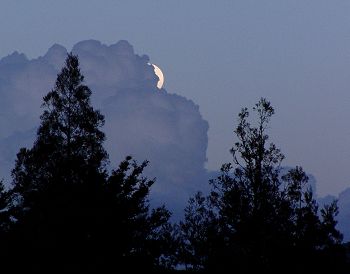 Sometimes you've just got to stop and look at the view!  Stephan and I went for an evening "stroll" up the hill over the road, to check the cattle there and on our way back down the hill, the moon was coming up.

I went to the Annual General Meeting of Kaitaia Veterinary Services Inc. today and came home a properly elected director on the board (having spent the last year as a co-opted/seconded director), as well as the deputy chair.  Afterwards I met up with Anna and she came home with me to spend the night with us before she leaves the country for a month next week.

Some weeks ago I booked heifer 494 and white-faced 470 to go to the works.  So much time has passed since, that I've had to remove 470 from that short list because she's getting much too close to calving to go off on a trip!  I picked up a single shot of 7in1 vaccine from the vet the other day - 470 had not had it with the others because I fully intended to send her off before now - and gave it to her this afternoon.  She was the cow with the pathetically slow-growing white-faced calf last year; I'll just have to hope she does better this time around.

I have no particular qualms about sending pregnant cattle to the works.  (Some research a few years ago was done on unborn calves to ensure that they suffered no pain when their mothers were slaughtered and found that until a calf breathes oxygen, it remains in a sub-conscious state.  I no longer believe every being has a "right to life"; I think it's far more a matter of chance, for any of us.)  However I wouldn't send a heavily pregnant cow off on a truck on a long trip and one is not permitted to do so if there's any chance of her calving in transit. 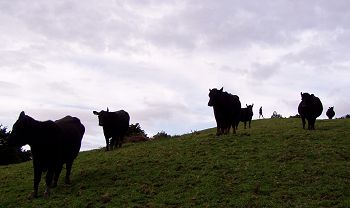 This evening we walked up the hill and then brought the young/thin cattle back around by the road to the yards.  They decided they were going down to that gate and I wasn't willing to force them back up the hill with the prospect of another gallop down the steepness to the other gate, opposite our main entrance.  I try really hard to keep them moving slowly when they're heavily pregnant and going down hills and they seldom take much notice of me. 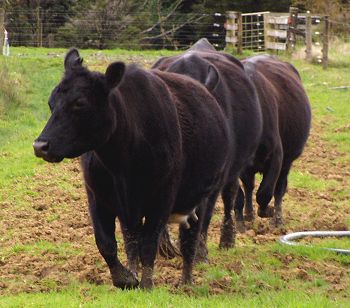 We drafted out four of them and they went to one of the easy-to-watch flat paddocks, while the others went off to the Camp paddock.

Now the waiting begins.  According to my magic spreadsheet, which tells me when the calves might be born, the bulk of them will begin to arrive from the 1st of October, but I'm always watchful, in case somebody's early.