We've been having a very sad few days. Our lovely niece Sarah, and Karl, parents of Kerehoma, have been anticipating the birth of their second child in May, an event we were all looking forward to with great pleasure. On Tuesday we heard that Sarah had discovered her baby had died.

During the week we waited while Sarah went through the process of having labour induced - and it was not the relatively quick, overnight process I had imagined. We spent our time feeling heavily sad for Sarah, Karl and the whole family, and they were rarely far from our thoughts. I cannot begin to contemplate the sadness for Sarah herself.

On Saturday morning Sarah delivered her daughter, whom she named Miria Ropaina. On Saturday afternoon Karl and Sarah, with Elizabeth, William and Miriam, came home from the Whangarei Hospital, and went directly to the Roma Marae in Ahipara, Karl's family Marae. In a specially woven lidded basket, a waha kura, lay tiny Miria.

We arrived there too, with other members of the family and close friends, and were soon called on to the Marae, where Miria was laid on the low stage at the end of the whare nui, where she was then never left alone.

I have long appreciated Tangihanga as very good way to farewell the dead. There is such an outpouring of love and support for the bereaved, both for those most closely involved, and for all of the people connected with them and the sad event.

Stephan and I had left instructions with Jude to feed the poultry and separate Imagen and Zella on Saturday evening, but felt we needed to come home to our house-guests overnight, and for Stephan to milk Imagen in the morning.
Jude, Roger and children went home on Sunday morning and we returned to the Marae for the continuation of the Tangi.

After a formal funeral ceremony in the Whare Nui, Karl and Sarah carried Miria along the road to the Urupa, the cemetery, followed by all who could walk the 800 or so metres, and then by those who could not, in cars. It seemed to me a very important part of the process, that sad walk along the road in the sunshine.

I thank Sarah for her openness in allowing me to write about this. 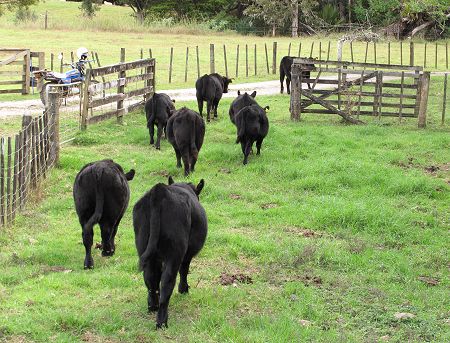 I weaned the last eight calves today. None of them have been as old as I'd have liked at weaning, but they have fortunately done reasonably well this season because of our lower stocking rate and the consequent good condition of their mothers, which allowed them to milk well. The average weight of these eight was 218kg and they were just over five, to just over five and a half months old.

I took their mothers out to the Camp paddock, then went back to get the calves a little while later. I expected them to dash away in pursuit of the cows, but they all moved very calmly.

The ram was following another of the ewes today when I went up to look at the sheep. I can't help myself running away whenever they come running toward me! I'm still suffering Post Terrifying Sheep Disorder (PTSD), a syndrome of which you've no doubt heard before.

Babette wasn't looking particularly well, with one ear hanging oddly low and a very snotty nose. She appeared lively enough though. We will have to carry out our final duty to her before very long.

After milking this morning, Zella and Imagen were unhappily surprised by not being allowed back together. Zella is now weaned and I'll put her together with the others in a couple of days. She's currently living with Isla's son, who was the naughty bull out on the road the other day. I don't think either of them has reached puberty yet, but the bull will definitely not be joining the other heifers with Zella.

I checked the newly-weaned cows' udders today, making sure there was no unusual heat or tightness. The tightness of the udder after the calf is removed is often quite uneven, probably indicating the level of milk production of each quarter of the udder. For instance, Abigail's back right quarter remains quite loose, probably because the mastitis infection she had early in her lactation knocked her milk production. Her calf may have been unwilling to drink much from that quarter too, which would have contributed to its reduced production. Interestingly Demelza was noticeably tight on her left side, but far less so on the right. Some of the others were evenly tight in all quarters.

I woke up at 1am feeling horribly ill. I've either eaten something very bad, or caught something. People say there is a nasty "stomach 'flu" going around. Stephan went trapping and I spent the entire day lying on the couch unable to move except for urgent reasons upon which I will not elaborate. 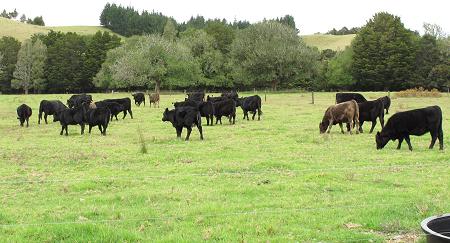 I wandered gingerly out with Stephan to see if we could find all the young stock in the Pines and PW, bringing them down to the Flat 2 paddock, where I mixed them with the last weaned calves. I kept having to lie down on the ground for short periods to recover from unpleasant waves of nausea!

The grass is still growing, very slowly, just enough to make it worth putting these youngsters in here for a day or two.

Mathew came out early this morning and he and Stephan headed off out the back to properly mark the trail from the Kiwani track down through the pines to our place in preparation for the ATC cadets' walk on Saturday. They found a better ridge than the one the whole party walked the other weekend. 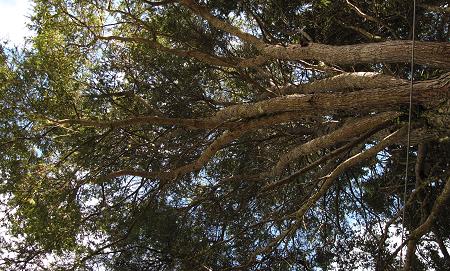 My view from where I had to lie down for a while. Because everything's so dry, it's not unpleasant to lie on the ground - and in my pocket was my woolly hat, making a nice soft pillow.
I was waiting for Stephan because he'd taken my bike back home to get something for a small job he was attempting to do: installing a tap at the new trough, for the ATC camping troop to use. But because of the way he'd installed the saddle to take the trough feed off from the main pipe, it wasn't going to be an easy job. I suggested instead that he take a tee off the feed which goes up to the Middle Back trough. Far simpler. 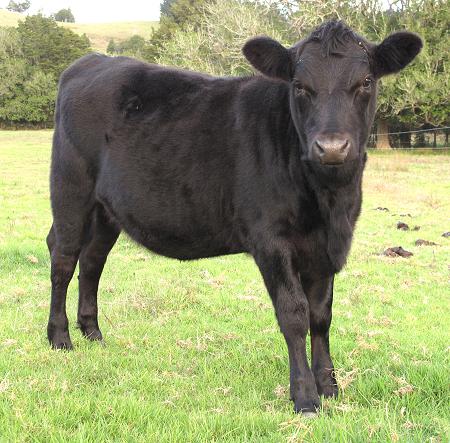 Young Zella is a reasonably attractive little thing. We haven't put any time into training her with a halter and I suspect we'll wish we had. It might still be worth doing so, although if we could train Imagen, ordinary beef cow, to behave as a milking cow when she was five, we will probably be able to get Zella to do as we need her to without being able to lead her around by a halter.