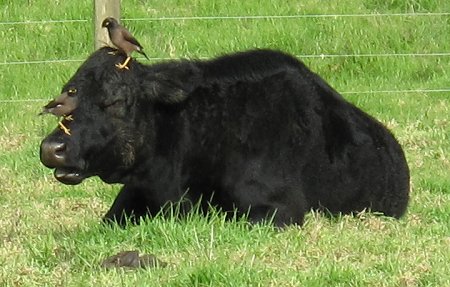 As I approached the cows' paddock this afternoon I noticed 479 had a couple of friends visiting. She was obviously very relaxed - eyes closed, chewing her cud contentedly - while they wandered around her head, presumably pecking at ticks in her hair.

As I watched they both hopped off the cow, and she lowered her head so one bird could reach up to examine the side of her face.

When both birds moved to go away from her, she lowered her head to the ground and stretched out in the birds' direction, as if to invite them back to a more convenient table.

One bird watched the movement and it appeared to be a communication it understood, because it walked back over to the cow to have another look... 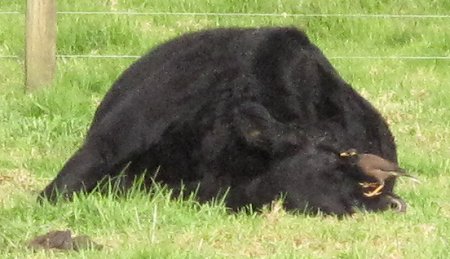 ...and hopped back up onto her face.

I don't really like Mynah birds, but they're fascinating to watch with the cattle, who generally don't mind them at all. The cows will usually shake them off their shoulders, where perhaps the birds' claws tickle their backs, but around their heads, they can often be seen cooperatively moving, or remaining very still for the birds. 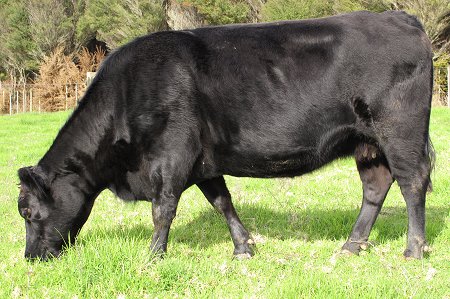 I opened the gate to let the cows into the neighbouring paddock, then spent some time moving around amongst them, checking on their general condition and looking out for anything unusual.

This is 475. She's now five and a half, so fully mature, and serves as a useful monitor animal to indicate the general condition of the herd. If she's nicely smooth under her skin, it is likely that everyone else is in about as good condition as I could expect. 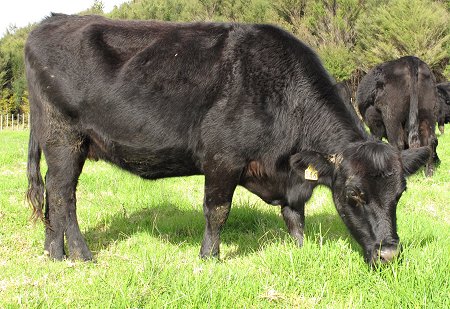 546, at three and a half, does not do quite as well yet at holding body condition. This is her first winter with the main cow mob - last year she spent her second pregnancy with the pregnant yearlings, after she had calved for the first time as a two-year-old.

I hope that by next winter she will look more like 475, and if she does not, she'll slip down the list of favoured cows, until she falls into the cull category. 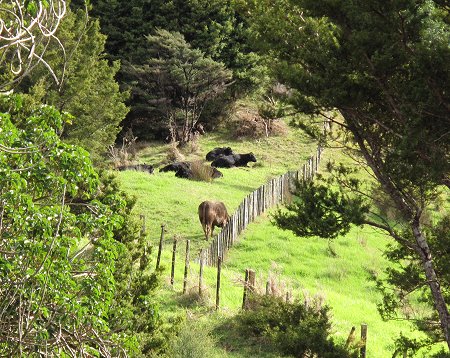 I walked up through the Big Back paddock to check the heifers and found them all peacefully sitting and grazing at the top of the hill, along the Middle Back fenceline. I want them to graze the Middle Back paddock, and it's a hard one to get them to unless they happen to be up here, so I opened the gate and called them through. They took a very long time to respond, so eventually I had to go and move them from behind. 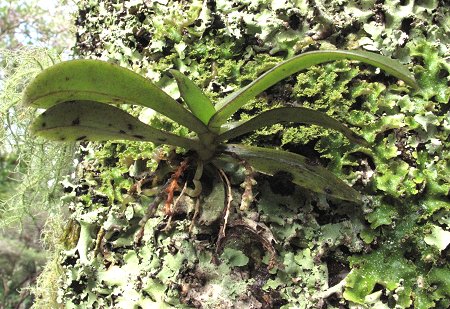 Once the cows were in the paddock with the gate shut behind them, I climbed through the fence into the bush reserve we fenced off last year. I've been keeping an eye out for native orchids over the last few months and on the side of a Nikau palm trunk, there was an orchid at about shoulder height.

I wonder how long it has been growing here? I looked around for others in the reserve, but didn't find any. 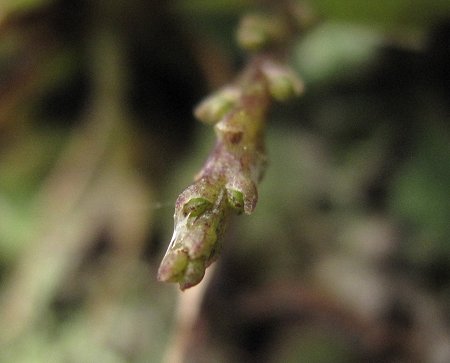 It is Drymoananthus adversus. I recall now that I saw one once back in 2006 when the Women in Ag group visited a farm where some bush had been fenced off for a long while. There was an orchid on the trunk of a tree there, which didn't make much of an impression at the time, except that I remember it being something I hadn't known about before.

This is a close-up of the flower spike which is developing. They are supposed to flower in October/November, so either this one is getting ready very early, or the flowers take a long time to grow. I will continue to watch it. 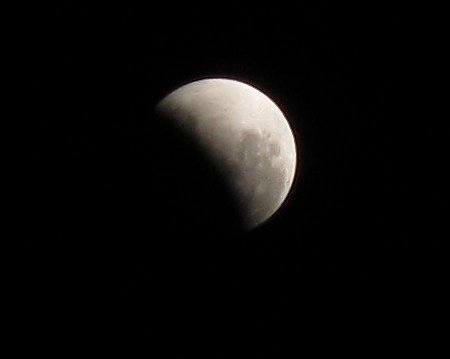 Tonight there was a lunar eclipse. Passing clouds with rain showers got in the way from time to time, but the sky was mostly clear. I took this picture just after midnight, as the shadow began to recede. 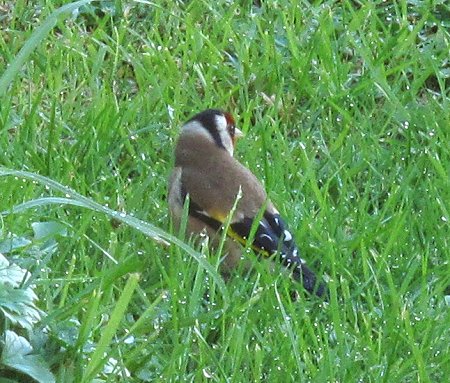 Goldfinches are regular visitors in our garden, and just after I took this picture I found Finan the cat with a newly dead one in his mouth. Damned animal. 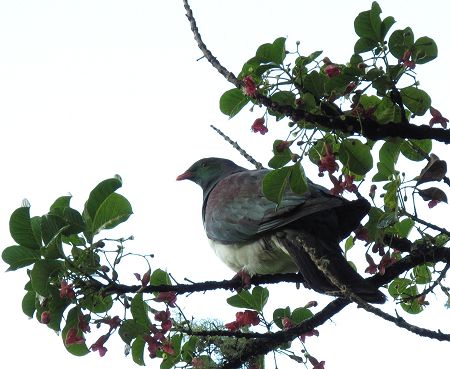 He'd be hard pushed to catch and hang on to one of these monsters: a Kukupa/Kereru/Native Wood Pigeon in the Puriri Tree. Puriri are a major food source for the pigeons, and the birds are sometimes quite unperturbed by people standing under the trees in which they perch. 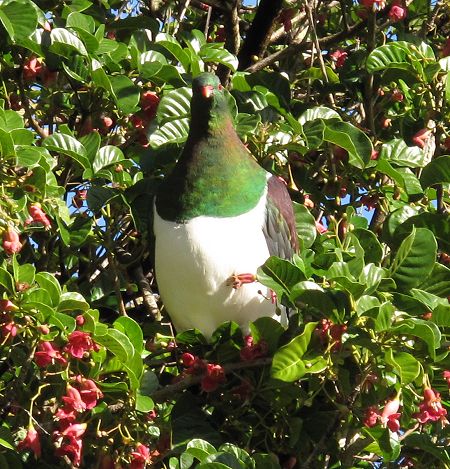 That first bird flew off, but on the other side of the tree, its companion remained in the morning sunshine. 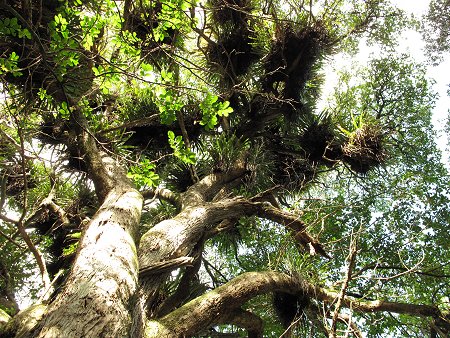 This afternoon Stephan and I went for a walk through the bush reserve near our house - and over the boundary fence into the bit which now belongs to Jane. We go looking for interesting things, pulling out weeds, most of which are the confounded Monkey Apple seedlings which grow from the seeds dropped by pigeons after they've eaten the berries on Jane's trees, along with the odd ragwort and privet plant.

I took this picture looking up into one of the huge Puriri trees. There are enough of those large epiphytes on the ground to make me quite nervous about spending much time standing beneath these trees! 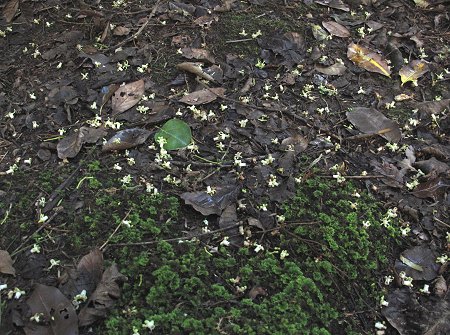 On the ground, lots of tiny waxy white flowers, from the Kohekohe trees which are currently in flower. 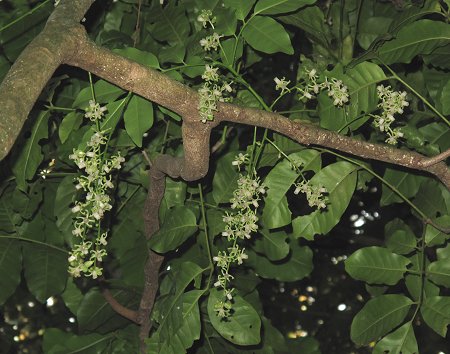 The flower stems grow straight out of the bark, even in the middle of the main trunks of the trees. 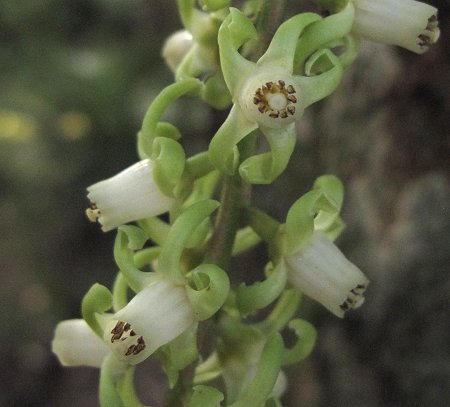 They have a faint, pleasant scent, smelling a little like honey. 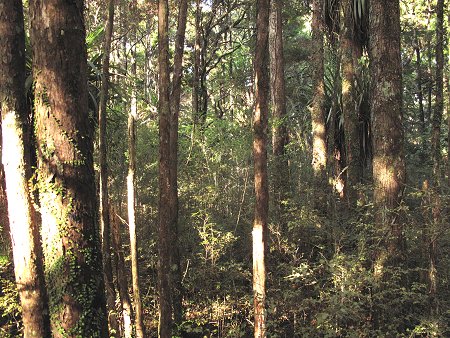 Over on Jane's place, cattle have been excluded for much longer than in our piece, so the undergrowth is becoming quite thick in places. 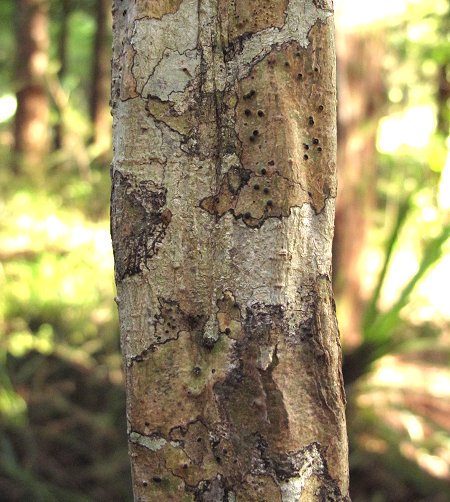 This is a Lancewood, with its striking bark - I presume the colours are caused by lichen, rather than colours of the bark itself. 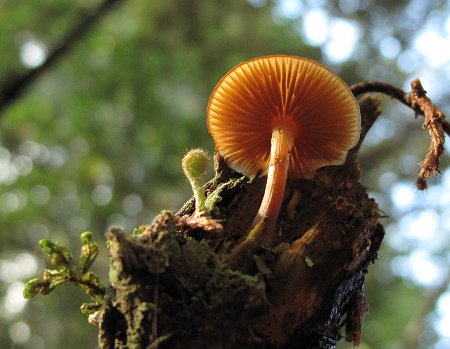 There are so many beautiful things to see - this little fungus was growing out of the end of a branch under which I passed. 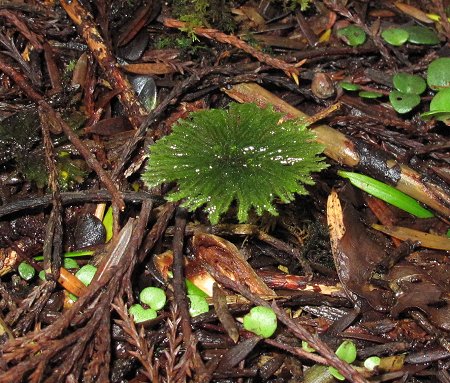 I think this is an umbrella moss. 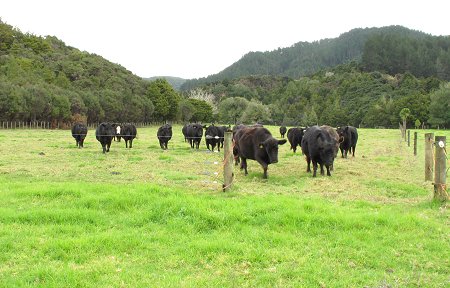 After a couple of days in the 5c paddock, the cows had tidied up most of the straggly thick bits of grass quite well, so I let them into 5b to do the same.

There were a couple of light frosts while I was away, but overall the winter so far has been very mild and pleasant, without too much rain, so the grass has continued to grow quite well. 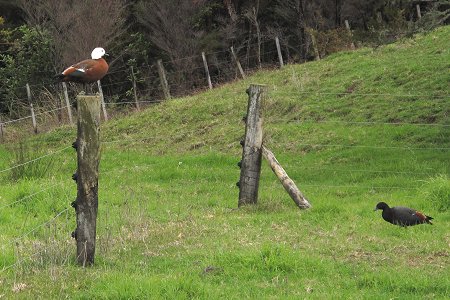 Paradise ducks don't usually sit on fence posts - we've only known one very special duck who routinely did so. 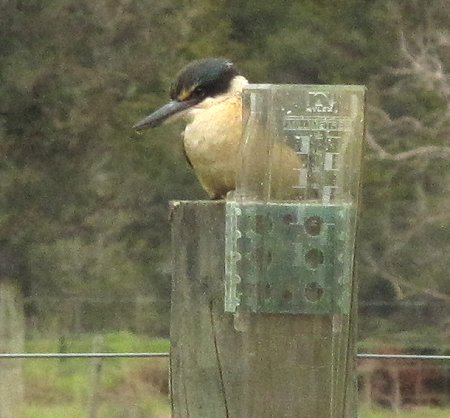 In the afternoon it rained and I watched from my office window as this Kingfisher hunted things in the grass from the top of a number of fenceposts. 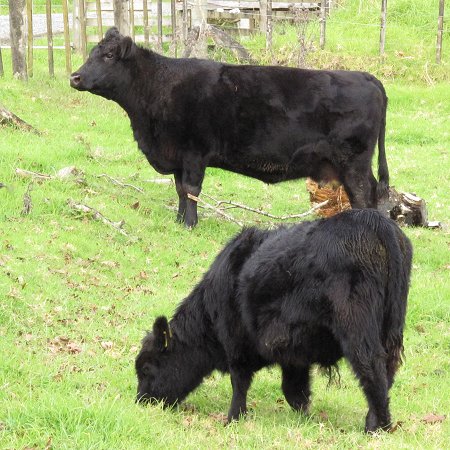 After spending the morning writing a magazine article, I brought the cows in to the yards in the afternoon, to give them a copper injection.

Imagen in the Pig paddock beside the yards, got quite excited about the other cows being nearby. I gave these two a copper shot as well - they're really beginning to hate me, after two injections in quick succession - the 7in1 vaccination was only a few days ago.

We went down to Whangarei so Stephan could attend a meeting for those involved in Kiwi protection work and stayed the night to keep Jill company on her first night home after her Chilean trip.

Thursday the 1st of July

I visited a physiotherapist at 7am this morning. I've fallen off the bike a few times, and once fell off the edge of the yards catwalk last year, and my right arm has been sore for ages. The doctors say rest is best, but in my experience things like limb injuries don't really get better until you work out which sorts of stretches they need to start healing and moving properly again. I hope I can, with some useful instruction, now start to improve my comfort and ability to do things again. 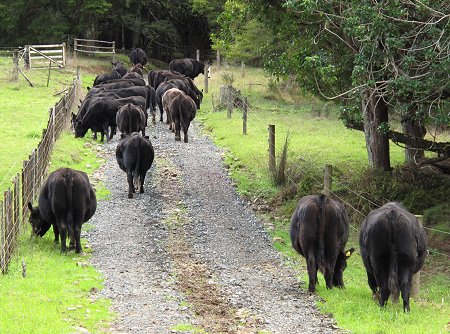 In the trees on the right, I've found two types of orchid, shown below. (I bet you thought this was going to be about cows. They're quietly on their way out to the PW, from the flats.) 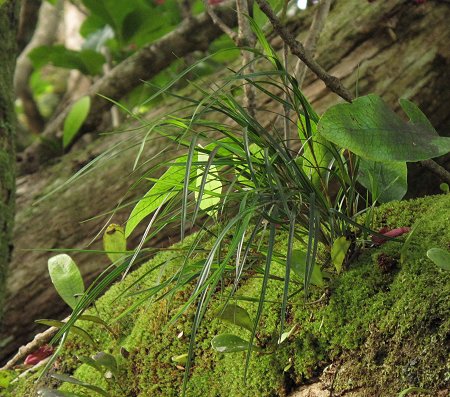 Here is the very common Earina mucronata, which grows in and on many trees around the farm. 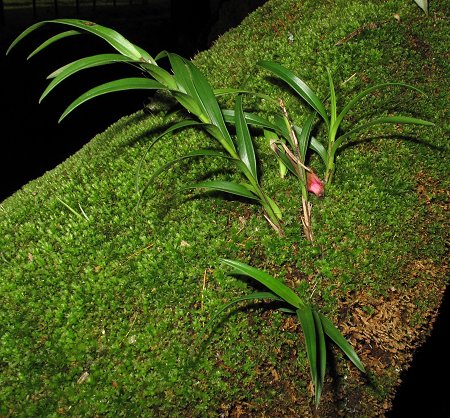 But this is one I hadn't noticed before, Earina autumnalis, which flowers in the autumn. I read that it is "very fragrant" and wonder if it is that scent which we have noticed on the breeze in some parts of the farm and wondered about over the years. I will have to look for and then smell the flowers next season. 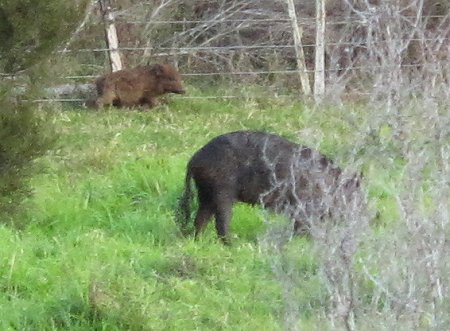 Thinking the pregnant heifers might by now have eaten most of the grass in the Middle Back paddock, I went out to check on them.

As I got off my bike at the bottom of the Big Back paddock I noticed these pigs, taking no notice of me at all, rooting their way through the pasture on the other side of the paddock. The little brown piglet was having such a good scratch, I could hear the fence squeaking! 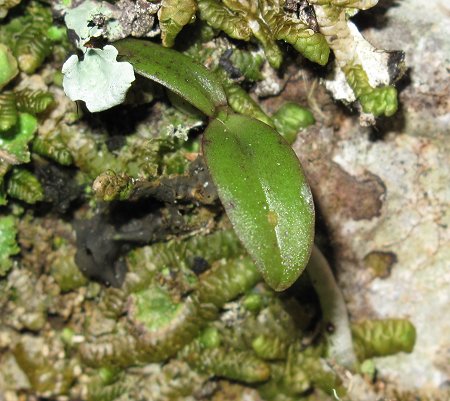 It has happened, as you might have gathered: I've got the orchid bug. This is a tiny plant on the same Nikau trunk as the one I found and pictured above. I went back to have another look at that other plant and discovered this smaller sibling a few inches away. 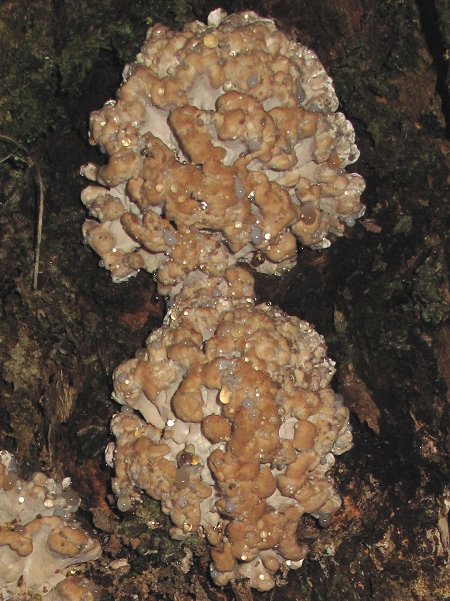 I don't know what these are, but they were growing on the north facing side of a large Puriri trunk. They look like some kind of mould and there were four of them. 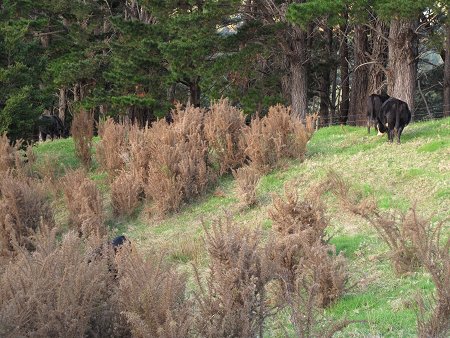 The cows, having gone into the PW (Paddock With Three Holes Two Steers Fell In) at the bottom gate, must have headed straight up the hill and around to the back of the pines. All this dead gorse is proof of Stephan's very busy and productive (or destructive) summer.