This week, a new font. Let me know what you think if it, if it makes any difference to you at all. The change has been prompted by a message from regular reader, John MacGibbon, publisher and writer of Martinborough Musings, who had been reading this site with an Apple iPad and discovered a problem with the text rendition in that device's browser. He tells me that a small application called Atomic Web, solved his problem, but also suggested a font change which might suit more browsers.

My day today was mostly filled with feeding little lambs! Giving them only 100-150ml every two hours or so meant there didn't seem to be much time to do anything else between feeds. Better to start them on little amounts often, and then I will gradually increase both the volume of the feeds and the time between them.

I had also become concerned about the tagged ewe's lambs which were not as active as they ought to be by this stage, spending much of their time lying down and looking grey, rather than increasingly fluffy and white. It didn't look like they were getting quite enough milk. We penned them and I fed them too, for the day.

A couple of feeds for the penned lambs this morning and then I let them out again so their mother could go and find some grass! Ground conditions are so wet at present that I couldn't keep the ewe and her lambs penned up any longer - too much mud. During the afternoon I watched as her two lambs were skipping around, obviously feeling the positive effects of some extra feed. 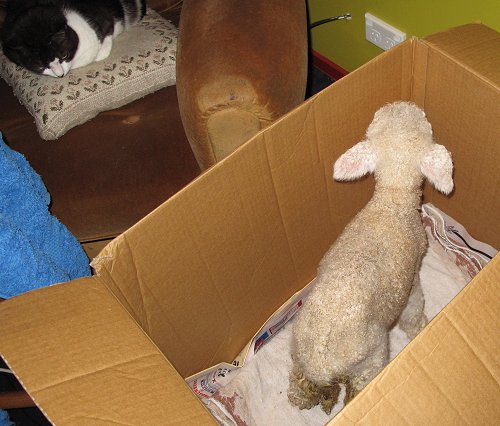 Lamb's smaller lamb, not doing terribly well, so I brought her inside in the cooling evening. She's feeding well enough, but doesn't look very healthy. 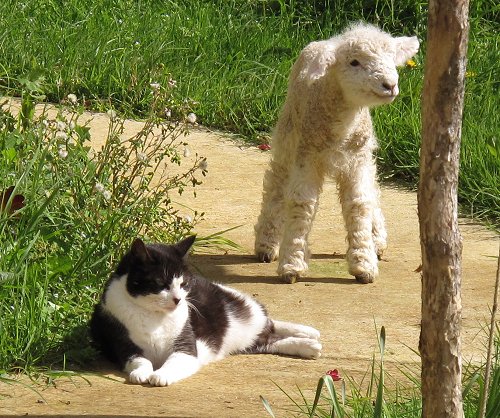 Little lamb looked like she was losing the will to live inside her tall cardboard box, so I brought her out into the sunshine and she perked up considerably. She's quite weak, but happily wandered around, periodically sitting down in the sunshine for a snooze. 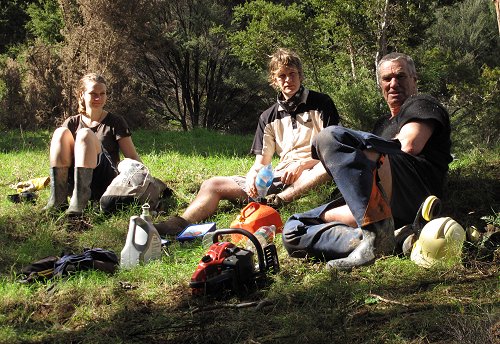 Miriam and Simon came out this morning and set off with Stephan to clear more scrub and prune trees. Stephan cuts with the chainsaw, and his helpers follow behind, stacking and clearing the mess.

Between lamb feeds I wandered out to move cows and have a look at how the landscape was changing in the Big Back paddock where these wonderful people were working. When I found them they were all lounging around on the ground, but it was obvious they'd not been spending much time doing that!

Stephan generally uses a Stihl chainsaw, but it wouldn't start; so he used the Home-lite for the day, a hobbyist's saw, which did an exceptional job. Simon and Stephan are now calling it the Hom-Elite. The Stihl will have to go in for repairs. 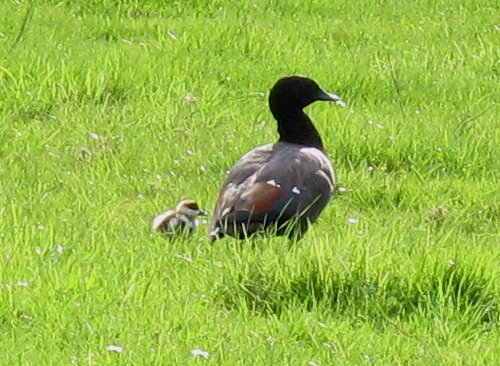 The pair of Paradise ducks on the Windmill paddock have produced two chicks this year - last year they raised five. I came riding along the track, not realising they were ahead of me before they'd run off in alarm, the two ducklings separating. One was following its mother very closely, but I had to wait while the other found its way out of the drain beside the track and up onto the paddock. Dad Duck came back to collect it. The males are very active in parenting the chicks. This afternoon I gave Miriam the bottle to feed the lamb which is still living in the paddock with her mother, Lamb.

The final tally for the rainfall this month is 324mm, compared with the August average of 150mm. However our annual total is still only at 84% of the usual total to this time. I spoke with someone the other day who reported that some of his dams are still unfilled.

Here is the table I created this time last year, with this year's data added:

Wednesday the 1st of September 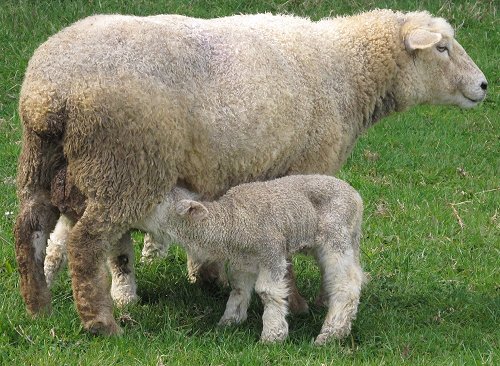 The tagged ewe with her two lambs, which are still looking underfed. At eight days old, they should be beginning to fill out, and spending lots of time playing, jumping and running around. 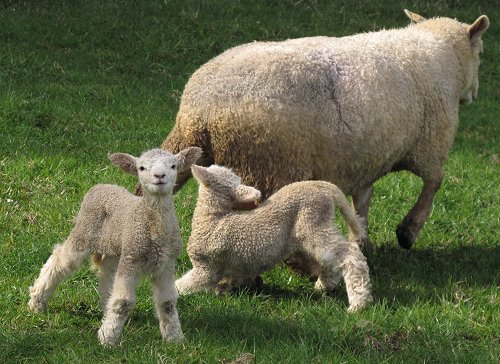 Their mother then moved off, mid-feed. Poor lambs.

After continuing to feed well during the main part of the day, the little inside lamb suddenly stopped feeding late this afternoon, began watching things on the wall which weren't there, then collapsed to her side. I gently helped her on her way, because she was obviously not going to recover. Her body has shown no sign of benefiting from the milk I've been giving her, her hip bones still obviously sharp under her tight wool coat. She presumably has some sort of blockage or other gut malfunction which I could open her up to attempt to find, but as Lamb will not be used for breeding again, the malfunctioning of this lamb can go undiscovered. 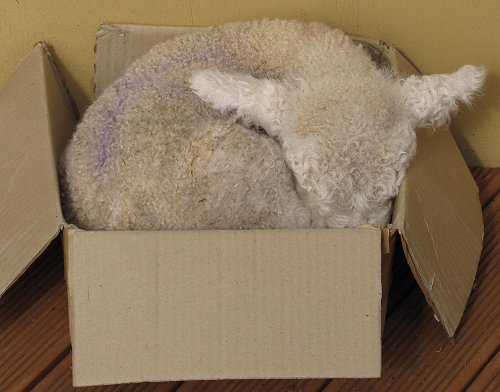 Little lamb ready for burial, looking for all the world as if she's simply sleeping in the sunshine.

My cows keep losing ear-tags. I noticed a few days ago that 478, who is due to go to the works whenever I organise it, lost the front of hers (the legally required bit) and today I see that white-faced 470's is broken and 542's has disappeared altogether. In my herd Allflex tags are pretty crappy. This is the hole where 356 got stuck. The scrub cutting trio have been here this morning filling in the danger spots and were working further up the gully when I arrived. 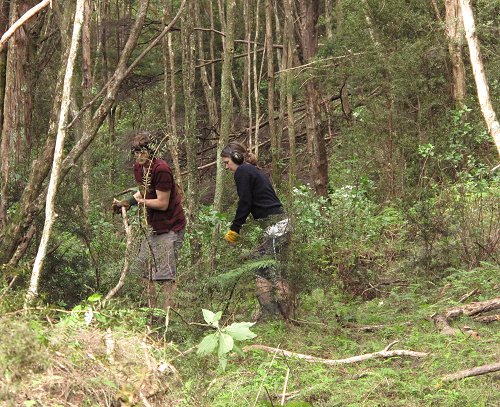 They weren't finding it particularly satisfying work, compared with actually clearing a hillside, but it will make an enormous difference to my levels of worry when the cattle are grazing this paddock. Its history has not been good, with three steers caught here, and Ivy toppling down one of the faces. 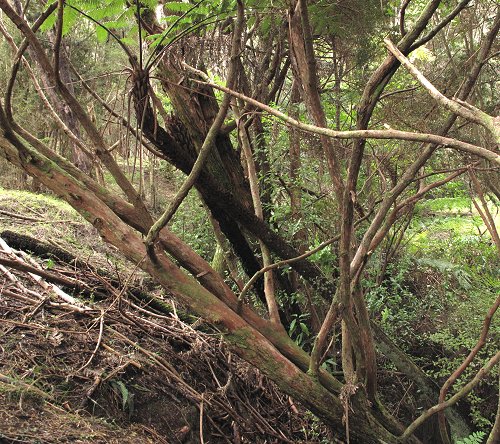 I climbed the hill beyond where the others were working, to identify the main areas requiring their attention. This is a hole which has formed in the second gully which feeds down to the hole 356 was stuck in, where several trees have fallen over as the water running under them has scoured out the soil. The resulting holes are steep-sided and quite deep. It would be difficult to extract any animal which fell into such an area. 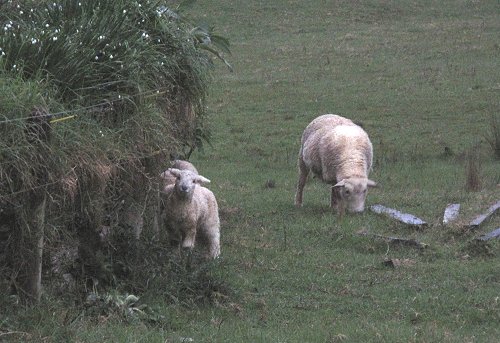 Simon and Miriam went home and it began to rain. The lambs were initially all out shivering in the driving rain. When I went to feed my bottle-lamb, I called her over to the shelter of the garden wall, and when I left her, some of the others very sensibly joined her there. 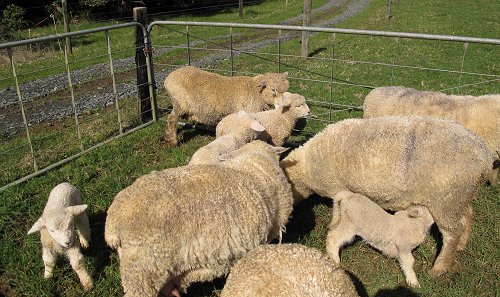 Simon came again, this time to do some wood-work with Stephan in his workshop.

Before they began though, they constructed a sheep pen over by the gate at the house end of the House Paddock, so I could catch the ewe lamb of the tagged ewe, since she and her brother are really not doing very well. 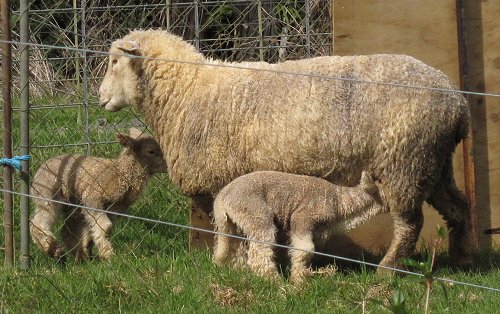 Here's the ewe lamb (at left) caged in the ute-crate, with her mother and brother outside. I'm hoping that by removing one lamb from this ewe, the other will have enough milk. I bought enough milk powder to raise Lamb's twins, but having lost one of them, I have sufficient to feed this lamb instead.