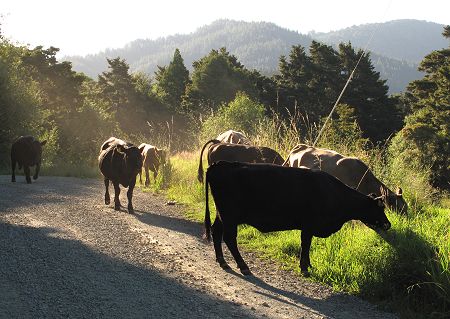 We brought the seven cull cows and their calves back from up the road this evening and weighed them. I then brought the bull's mob into the yards to weigh those calves too. The two mobs spent the night at either end of Flat 1, separated by an electric tape, ready for mixing tomorrow.

I don't need the cull cows to be in calf, but management of them from now until they go is easier if they are pregnant, in that they are not cycling every three weeks and definitely not on the day they go off on the truck. On a truck, cows on heat are open to more possibility of injury as they try to jump other animals or others try to ride them. I'd rather they were all normally quiet when they go.

I let the two mobs of cows mix this morning, and other than the odd scuffle, they settled quite quickly. It's not long since they were all together. The bull found it all very exciting, having seven new cows in his herd, and soon worked out which ones were of most imminent interest for him, which involved chasing some around the paddock until they let him get close enough for a good sniff.

Then it was the turn of the insemination mob's calves to be weighed. All the calves are looking pretty good, with several now pushing 200kg at just over three months. The lightest and youngest heifer weighed 130kg. There was the odd silly calf, but most of them behaved very well in the yards. I think the quietening work we do really pays dividends.

The heifer calves have an average daily growth rate of just under 1.2kg (all over 1kg, which is pleasing); the steers, 1.26kg; and the six bulls 1.38kg. Many of the calves which started off with tremendous growth have naturally slowed a little, but all those whose early growth rates were disappointing, have improved, which doesn't always happen. 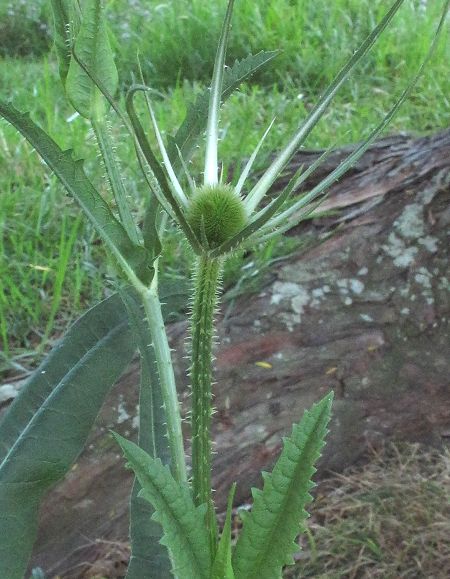 These Teasel thistles pop up occasionally, but only in two places on the farm, although they're beginning to appear at increasing distances from the original single plants I've earlier noted. I'll have to bring a bag and some gloves back to collect this one.

Monday the 1st of February 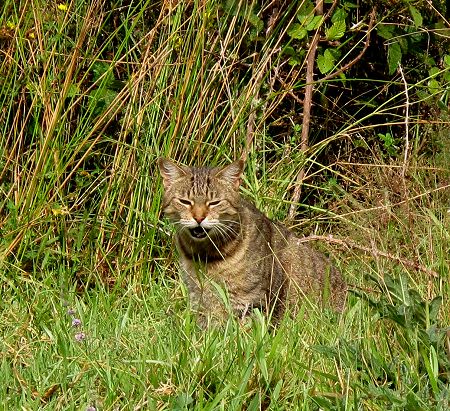 When quietly checking the bull's mob this morning I heard a cat's meow from somewhere nearby and my heart sank, thinking of yet more feral cats to catch and dispatch. But the call was quite insistent and eventually this familiar face appeared from within the blackberry patch: Spice. We were about 300 metres from home and across the river, so I was surprised to see her here; and yet considering her regular disappearances and the number of rabbits I know to live in this paddock, perhaps it is no surprise at all.

I wasn't so pleased when, after watching the cows following her round, Spice came over to me and looked to be picked up! But the cows don't tend to notice a cat scarf, so we were both safe enough.

Later in the day when I was wandering around picking ragwort, I looked up and found the bull coming toward me with a nasty look on his face. I can't be sure he had evil intent, but he gave me enough of a fright, looking at me in much the same way the ram did before he attempted to kill me, to prompt me to duck up through some gorse and find a tree I could scale if I needed to and from there I kept a watch on the bull to see what he'd do. I don't know what had happened in that moment, whether he suddenly saw me and it startled him - except I was quietly moving around picking flowers and I think he'd have seen me as he came toward me - or it's my residual nervousness about male animals which made me overly sensitive, but it seemed a situation in which discretion, or sneaking away, was the best response. There's no point thinking "if only" as you're being barrelled into the ground by an enraged testosterone-frenzied animal. 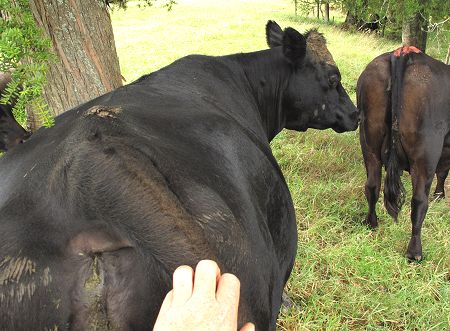 This is four-year-old 479 and she has never let me touch her before. After taming all the easy heifers this year, I've continued to work at sneaking up on those less keen and I'll always have a go if a quietly standing untame cow hasn't moved away from me as I approach. As usually happens, as soon as I started scratching this bit of the tail, 479 found she really enjoyed the sensation and let me carry on. 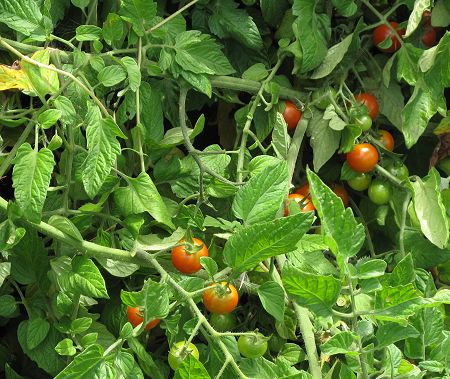 For my birthday last year Stephan made me a rose garden - a little tiny one which some visitors have very rudely laughed at, but a rose garden nonetheless. In it I also planted some chives and then some miniature tomato plants I bought in town and now it's impossible to see any rose plants at all, because while the tomatoes are miniature, the plants they're on are most certainly not! The tomatoes, now they're ripening in number, are a delightful snack in the sunshine, and being just outside the house, they're easy to pick and pop into one's mouth for a burst of deliciousness!

I hope that the roses are surviving in the shade, but won't really be able to find out until the Tomatoes are finished. 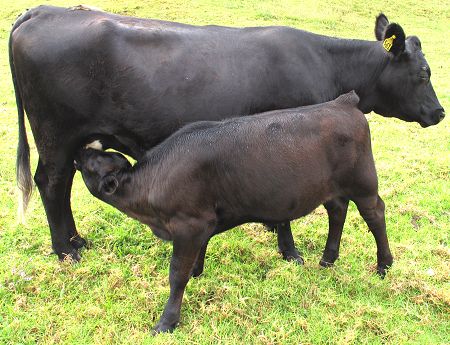 This is 561, one of the three two-year-old heifers. Her daughter looks quite small, but her weight gain to date is a respectable 1.09 kg/day.

My favourite, 572, with her beautiful daughter, 628. I really like these two. This calf is growing at a very impressive 1.27 kg/day - impressive because the heifer calf of a two-year-old mother is often not spectacular. 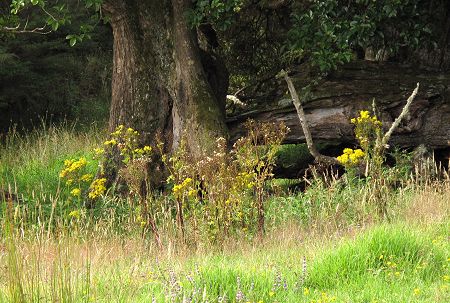 Arrrrgggggh! This looks like some of those places we see at the other end of Diggers Valley when we go for a drive; but it's not there, it's in our own Big Back Paddock! We've been keeping on top of the ragwort elsewhere around the farm, but here we've left it too long in many cases. Lots of plants have already shed their seeds and the rest are ready to go. We spent an hour and a half this evening in different parts of the paddock, cutting seed heads and carefully putting them in bags, then pulling the plants out...

We need to go back and do a lot more picking yet, but it's an end of the day job when the sun is not beating down, and a regular evening hour spent out here will see the job done quickly enough. 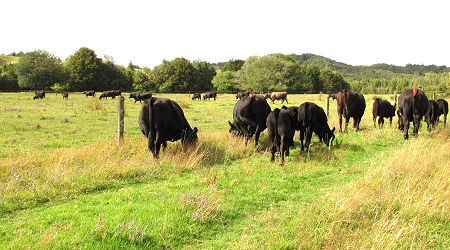 The grass is still holding on around here, with enough rain to keep things green. 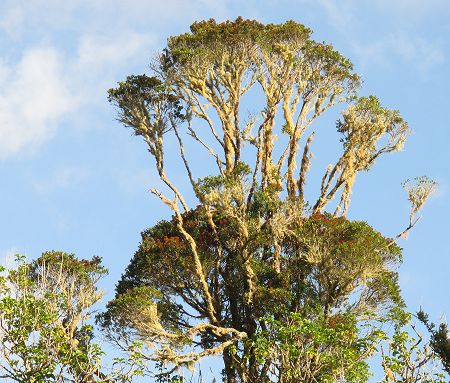 This is the only Rata I've seen flowering this year. I've kept an eye out for any red in the bush on the hills around the farm, but have seen none. Some years they're fantastic, and in other years they don't flower. You have to look carefully to see much red on this one. 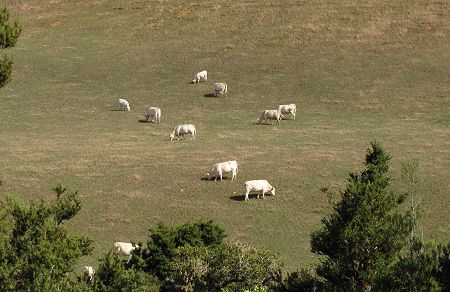 We went over to Broadwood this morning for an advertised farm sundries clearing sale, being held just before the usual stock sale at the A&P yards. We travelled through the Diggers Valley Road to the Herekino end and then along to Broadwood. Most of the hillsides look very dry. 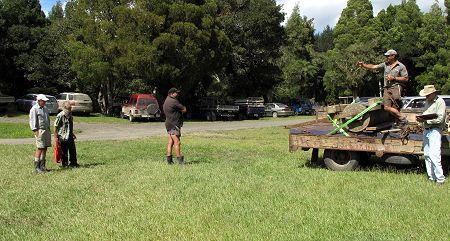 The clearing sale included lots of old junky stuff, some useful bits and pieces, a couple of tractors and some other large farm equipment.

The guy in the white hat on the left, and the one in the black hat in the centre of this picture were in the middle of a serious bidding war, but unless you spotted who was participating, you'd never know who the auctioneer was taking the bids from. One raised an eyebrow to indicate a bid and the other gave a minute nod of his head.

There were quite a few people gathered for the sale - the auctioneer has his foot up on the item he is selling in this picture.

We bought a few bits and pieces for about $25 and then Stephan went off to visit Heather, who makes cheese, to learn how to make Mozzarella, while I watched the stock sale. 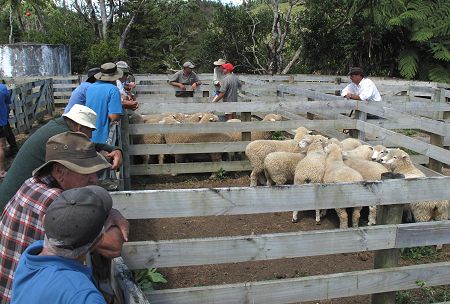 There were a few sheep, including some very nice rams bred by Madge Hows, which reminded me we'll have to think about whether or not we want another one this year. 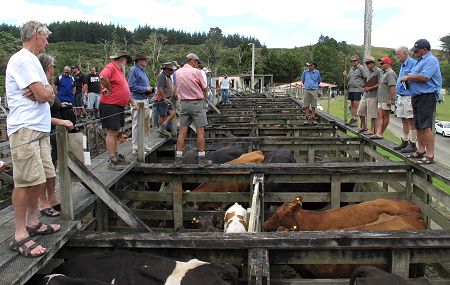 It was a small yarding of cattle, most farmers having already destocked before things got really dry. Prices are holding reasonably well, so those who still need to sell stock are able to do so now without taking too much of a financial hit. There's still the odd bit of rain around too, which is keeping people positive, even if it's not obviously making much difference to the colour of the surrounding hills. 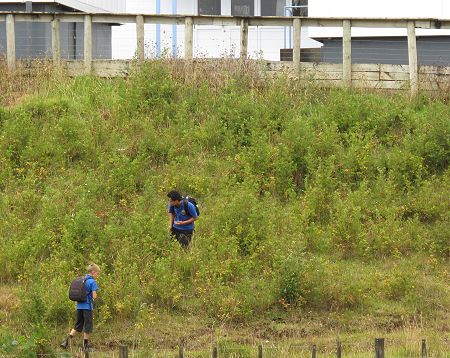 Lunchtime at Broadwood Area School next to the sale yards, and a couple of students took the opportunity to pick blackberries. 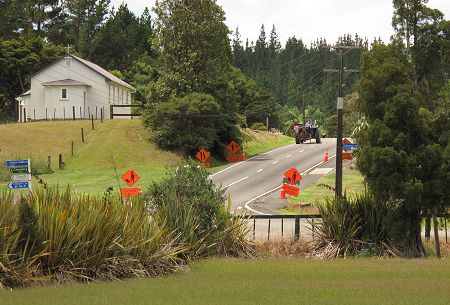 When the sale was over, those who'd bought the tractors drove them away.

I took the picture from the Showgrounds' main field and the stock yards are to the right down the side road. The tractor is being driven off in the direction of Kohukohu and the Broadwood Store is back in the other direction, behind me. 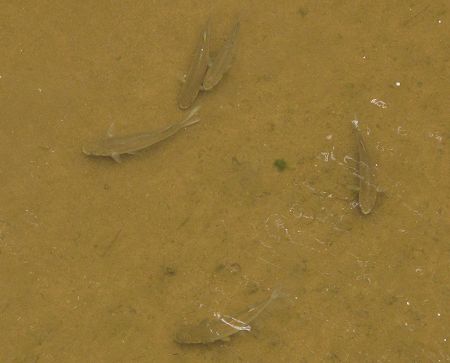 I waited around for a while chatting to various people, then strolled along to the shop to buy an ice-cream. John at the shop told me these fish, whose picture I took as I walked over the bridge, were Mullet, which school up the stream from the harbour from time to time.

Stephan eventually turned up and we went home again, down the valley road.

Lovely 572 came back on heat today, so I inseminated her again just before 7pm. Let's hope it works this time!

I'm not feeling very pleased about my insemination record this year. I was rather spoilt by last year's 82% conception rate, but as is bound to happen, biological systems can swing the other way as well. This year I'm only doing as well as the average technician. I am a little surprised, because with the marvellous season we've had, I thought the cows would all be ready to go and easy to get pregnant, but some have been quite slow to come on heat.

I drafted Irene 35 and her calf out of their mob this evening and put them in with Imagen and Irene 698, because the two bull calves whose mothers, Irene and Irene, have Neospora need to be given a four day treatment by injection and I need them together and near the yards.

#89, son of Irene 35, and #90 (Stephan calls him Joe 90) had an extended battle for supremacy, lasting over half an hour, leaving both of them panting and drooling.