The week beginning the 3rd of December 2011.
Saturday the 3rd 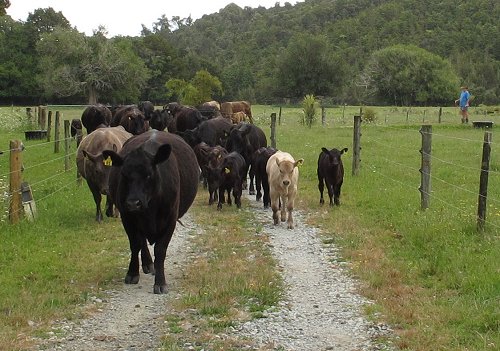 We brought half of the calves in today to weigh them for the second time.  Considering the lack of grass growth in this very dry spring, they are doing exceptionally well.  They currently range from about 95kg to about 110kg, with one or two a little heavier. 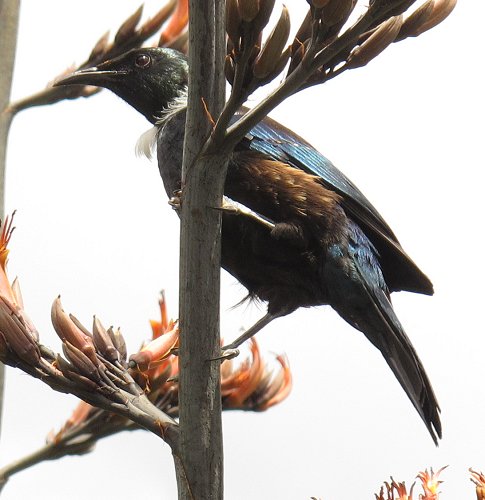 This year our flax plants are bigger and better than ever, flowering more profusely than ever before and the Tui are flocking in to take advantage of them.  We regularly see about a dozen birds flying from one flax plant to another around the pond and the back of the house.  They're beautiful to watch. 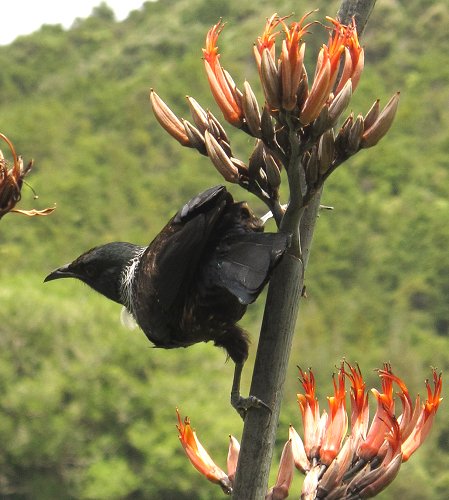 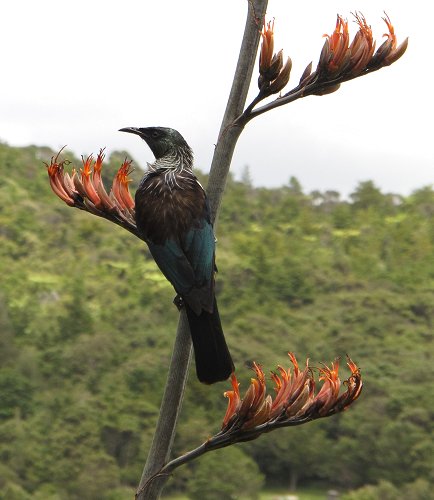 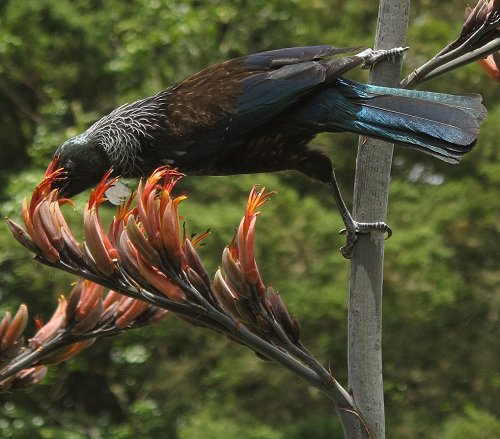 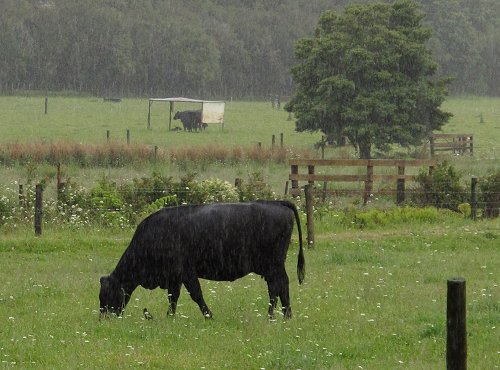 We had 23mm on 1 November and nothing more than a few millimetres on the odd day since.  This rain started and carried on until we'd measured 64.5mm in the gauge, which is a substantially useful amount of precipitation. 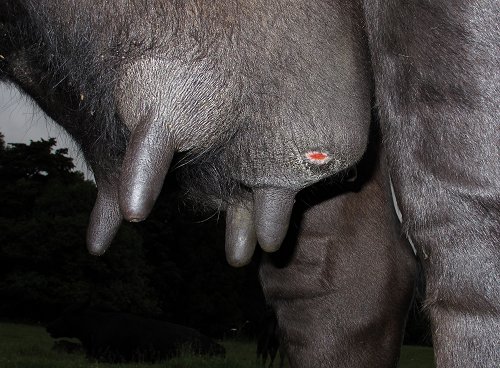 579, who is four, has had an injury to her udder and an abscess has formed in this rear left quarter.  I noticed its funny shape a couple of days ago, but didn't remember to have a look at it then.  Today I squeezed a bit of pus from it as she stood still for me.  I tried soaking it for a while in Epsom Salts and warm water, to try and soften the skin and draw the infection out, but the soaking didn't seem to have much effect.  579 stood quietly while I fiddled around by her left rear leg.

Over the next couple of days I thought about what to do about it and concluded that because of the regular violent bunting of her feeding calf, it would be foolish to have a vet cut the abscess open to try to resolve the issue.  It would never have a chance to heal and presumably she might lose the quarter.  There is still milk in that teat and 579 is quite well.  I'll keep an eye on her and keep squeezing the abscess for as long as the original injury site is open. 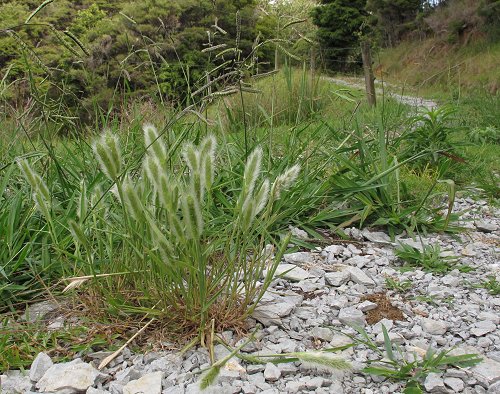 The Annual Beard Grass infestation has continued to appear amongst all the lime-rock we had spread last year.  The bulk of it was where I photographed it the other week, but there is enough appearing along the rest of the tracks to demand that we spray them all. 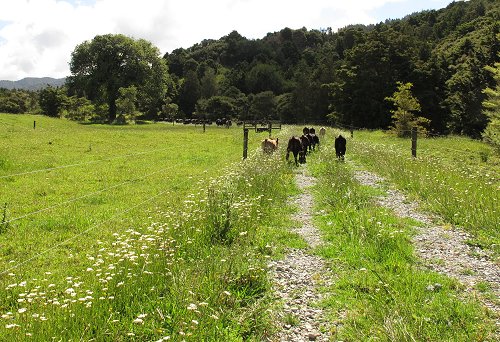 Twenty cow-calf pairs heading out to the Big Back Paddock.  I'm now grazing the back paddocks and growing the flat paddocks at the front of the farm in preparation for mating time towards the end of the month.

This track needs spraying!  I've found two or three Beard Grass plants here, but I bet there are more yet to germinate, and they're really hard to see before they flower, so there could be loads of it here. 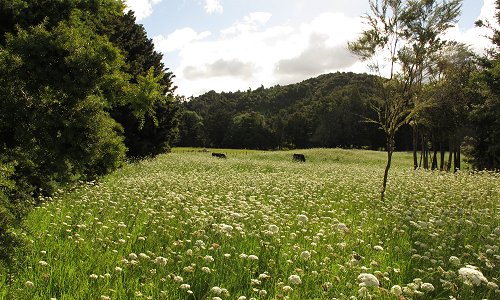 Two cows in a paddock they have no hope of getting under control!

These are Irene 35 and Damara 74 who both slipped their pregnancies during the year.  Both are getting fat, which won't hurt Irene in particular, since the Neospora infection she permanently carries puts a constant load on her immune system, which usually makes her thinner than she would otherwise be.  I'm still keeping her, because her grand-calves are looking really great and I'd like to get another son from her, or a daughter to carry on in her place, even though she would carry the same infection and the same risk of calf-loss.  It is the Irene family around which I have ended up building the herd.  They're fabulous animals and I believe it has been worth the extra bother to breed around the Neospora infection we discovered Irene senior brought with her from her previous home.  Most farmers would have culled Irene senior as soon as she slipped her mummified calf in 2008, but bull #90 is her son from the following year, and without him, I would not be enjoying watching this year's fantastic crop of calves! 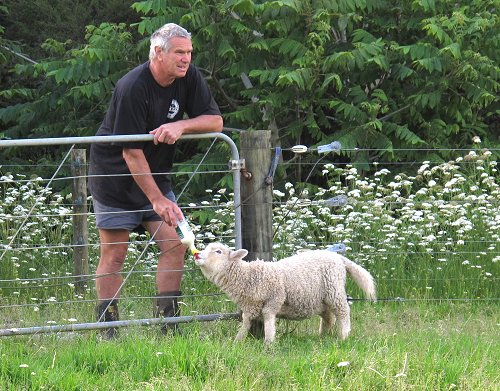 Stephan's morning routine now involves getting the cows in and milking them, then dishing out enough milk to the calf in the shed, who feeds from a teat mounted in the gate of his pen and also for the lamb, who gets her reducing portion by hand - or from the bottle in a bracket Stephan built for the wooden gate up in their other usual paddock.  The pigs get the rest of whatever Imagen has produced and then cows and calves go off to their allotted paddock for the day.
Then it's my turn to deal with the bucketful of Zella's creamy milk.  First I skim the cream from yesterday's milk and pour the skimmed milk into jugs for the house.  The remainder goes into the cheesemaking pot or the pig bucket and sometimes Jane comes with an empty jug from next door.  (The skimmed milk still ends up with a reasonable amount of cream sitting on top when it has sat undisturbed in the fridge for a couple of hours.)  Zella's fresh milk is then strained into the big stainless steel pot and put into the fridge to stand until the following morning.  Then I have to wash the buckets, teats, bottles, calf tube, etc... 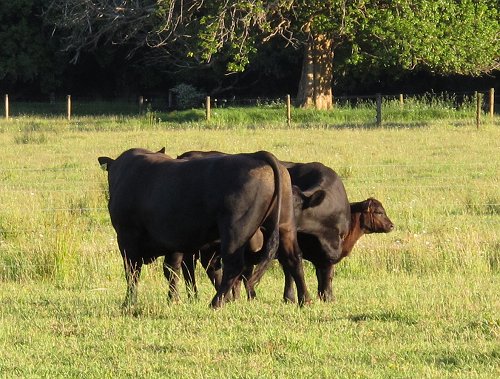 Athena 72 is the crazy cow who causes problems before she calves, to the extent that I will cull her from the herd if I can't manage her easily in some other way.  Today I gave her one of the bulls, earlier than the others will begin mating, hoping she will get in calf before the rest of the herd, so she will have calved first, which will reduce (I hope) the trouble she causes then.  I've only kept her because she's Isla's daughter and looks so much like her mother! 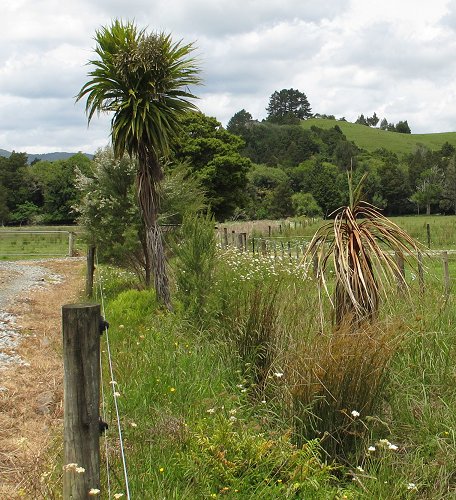 A few years ago Cabbage Trees all around the country died.  The disease was named Sudden Decline and it was some time before the cause was found.  It looks like we have a victim here.

Fortunately only half a dozen of the trees have died around the farm and this is the third young plant I've watched die.  These two are trees grown in the drain from bird-dropped seeds.

We weighed the rest of the calves today.  Overall the bull calves are averaging 1.37kg gain per day and the heifers (excluding the twins, which are doing just under 1kg each), 1.24kg.  I am very pleased, because this lot of calves is the biggest group I've ever bred from cattle entirely of my own breeding and because the bulls are the best I've ever bred, I had high hopes that their calves would be good ones.  They've certainly been looking really nice, and their growth-rates are also excellent.

The twins' mother, 545, is still pretty thin, so I drafted her out of the mob and she can go and graze with Zella and Imagen for a while, and I'll also give her some feednuts and molasses each day, to try and improve her condition and help her to provide her daughters with a bit more milk.