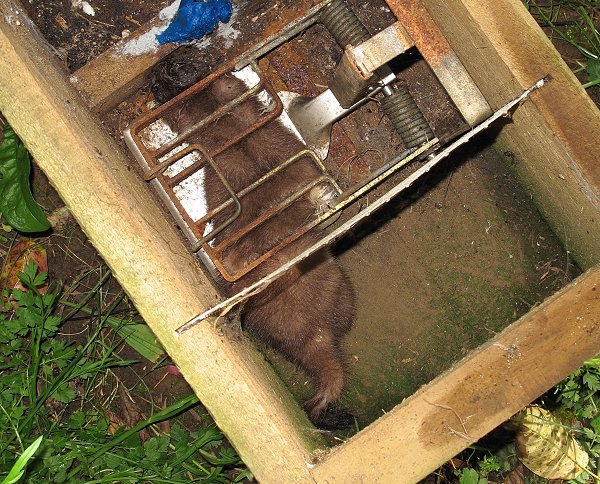 This is presumably the stoat which ate two of the Pukeko chicks of the family of five we were watching from early September.  If it's the same stoat we've seen from time to time in this area, it has been around for several years.  It is very satisfying to have caught it. 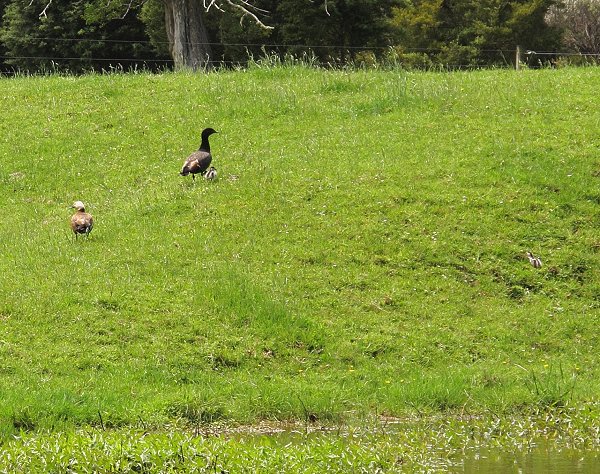 Putangitangi with two newly-hatched chicks in the Mushroom 3 paddock.  The chicks were dabbling in the little pool at the bottom of the photo when I first saw them. 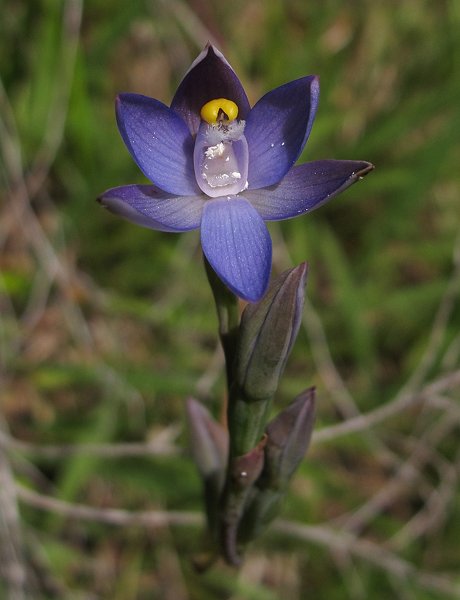 On this warm and sunny Saturday morning I went out to check on the orchids.  I only found a couple open in the corner of Mushroom 3, where I'd erected an electric tape to keep the cows from eating the plants - and later discovered that somebody had been able to reach far enough under the tape from the slope where she was standing, to eat two of the biggest plants I'd been watching!  I hope they'll grow again next year, since I've never seen those particular plants flower.

This is a plant whose flower I saw last year too. 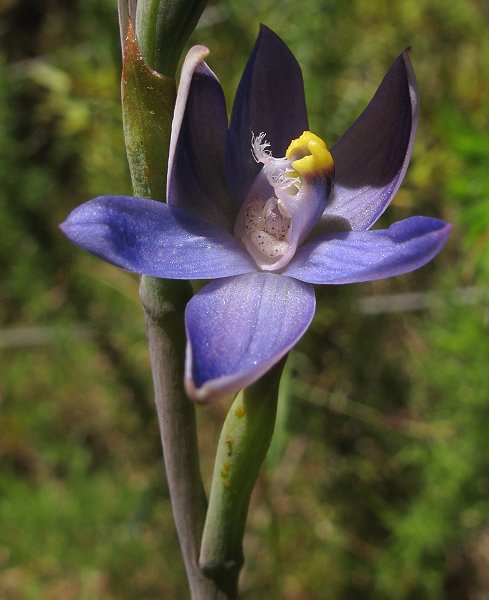 But this is something different: its mid-lobe (which I understand from nativeorchids.co.nz to be the name of the top of the column) is quite different in this flower from the one above.  The spotty nature of the stigma is interesting too. 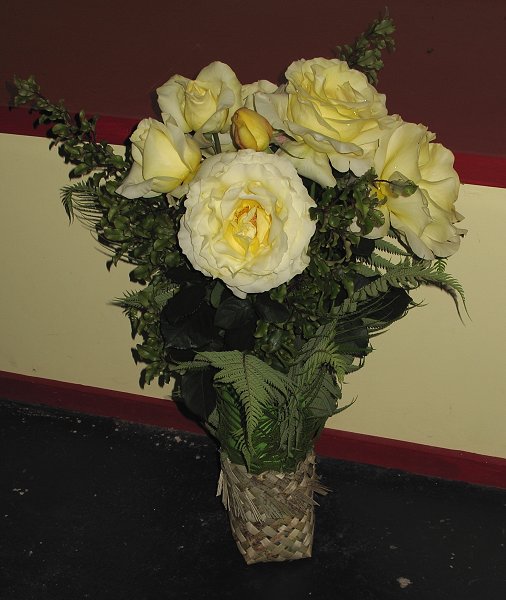 At home in the garden the huge lemon rose I pruned really hard a few months ago, sported this fabulous show of blooms.  I cut them all with long stems and put them together ready to take out with us this evening, to celebrate Christina's (Stephan's cousin) birthday. 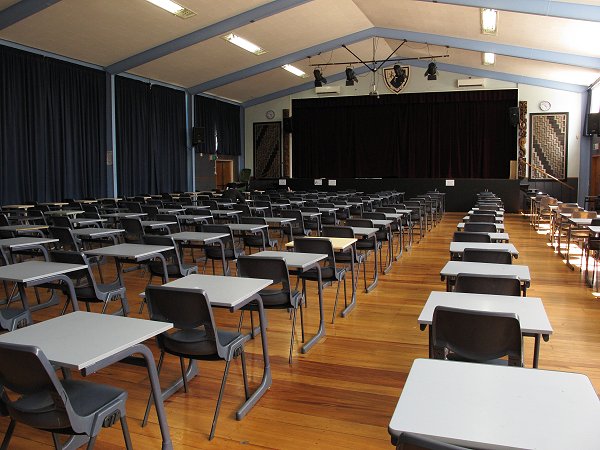 On the way to dinner, we popped in to College and supervised a student sitting a Scholarship exam.

This has been my workplace for the last couple of weeks, often full of students (fortunately these days there's some air conditioning!)  On the television news I've seen pictures of an exam hall a little like this, but obviously in a smaller or more well-resourced school, where the desks were more distantly spaced and the lighting better.  We have to close curtains on either side at different times of the day to keep the sun off desks, or decrease the distraction caused by students (who shouldn't be there) passing by outside. 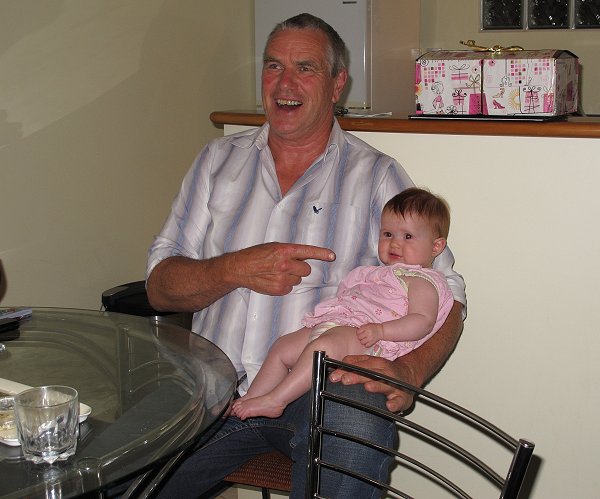 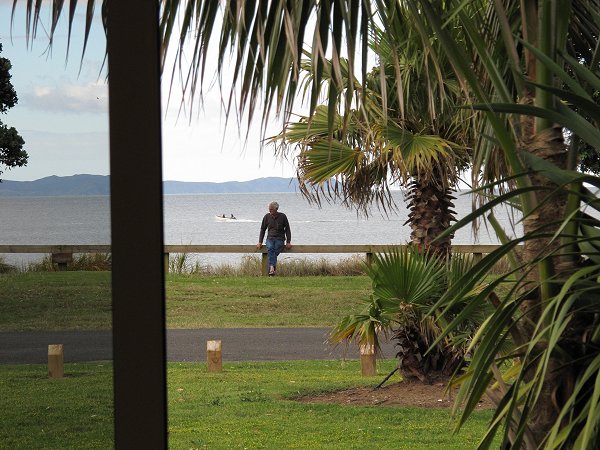 Smoking has gone from completely socially acceptable (I still can't really believe we used to put up with people lighting up at restaurant tables while others were still eating) to the thing you have to do a long way from other people!

We were at the Taipa Bay Resort - rooms and restaurant - where Christina and Dan had a free night for two, so decided to go there for her birthday dinner.  The food was good, but the service and organisation were dreadful.  There were thirteen of us for dinner and the last person was still waiting for his meal after the first had finished eating.  It was entertaining, but in all the wrong ways. 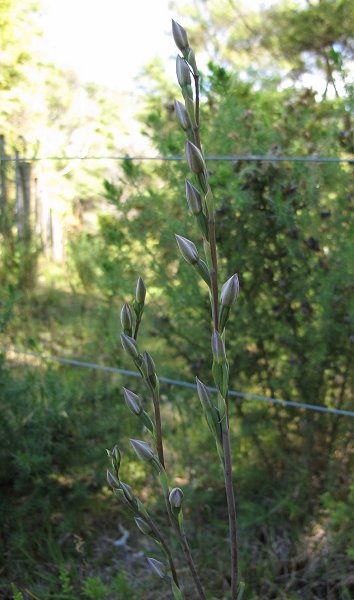 Orchid buds on the point of flowering - unless the weather is inclement, which seems likely.  I won't be here to see them, in any case, having exams to run all through the next week.  The plants don't care what happens, since they'll self-fertilize if they don't open.  I'd love to see such a lovely show of blooms though.

This morning was cloudy and by the time the sun came out this afternoon, it was too late for the orchids to open.  They're quite particular. 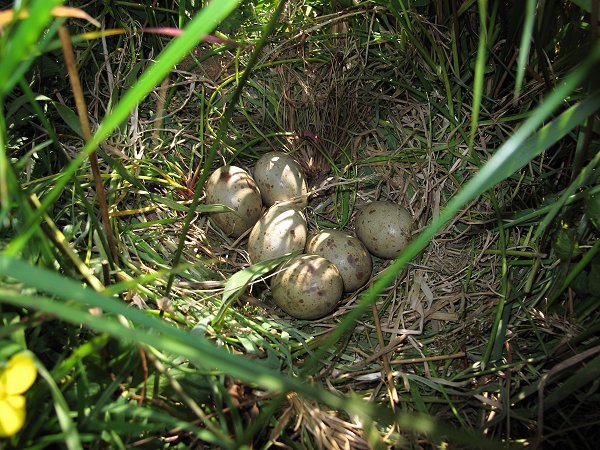 The Pukeko nest in Flat 5a, which I first photographed 17 days ago now has six eggs. 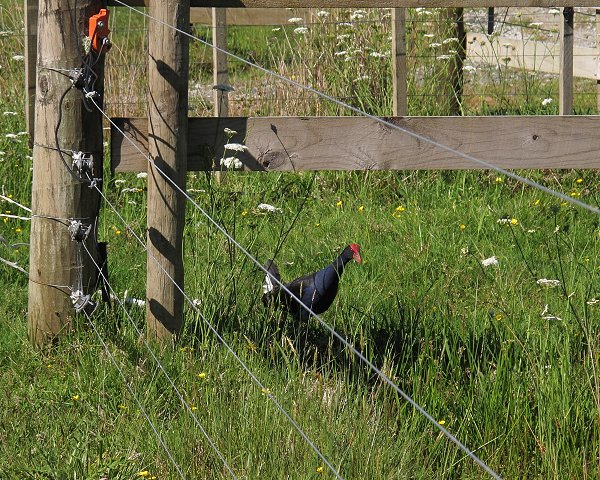 The incubating parent bird stayed for as long as she could bear it as I approached, then ran quickly off and away from the nest. 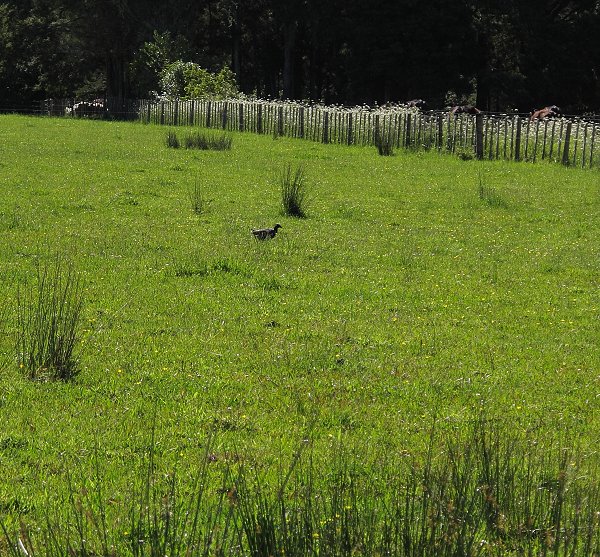 Across the paddock I saw the characteristically sneaky walk of another of the group which had been acting as a sentry.  In the other direction, down in Flat 2, I spotted a third bird doing the same thing.  There are usually at least two birds somewhere around a nesting Pukeko, which presumably let her know when danger approaches.

If you look carefully you will see there are cows moving along the lane on the other side of the Parsley Dropwort flowers, on their way from Flat 4 to the Small Hill paddock. 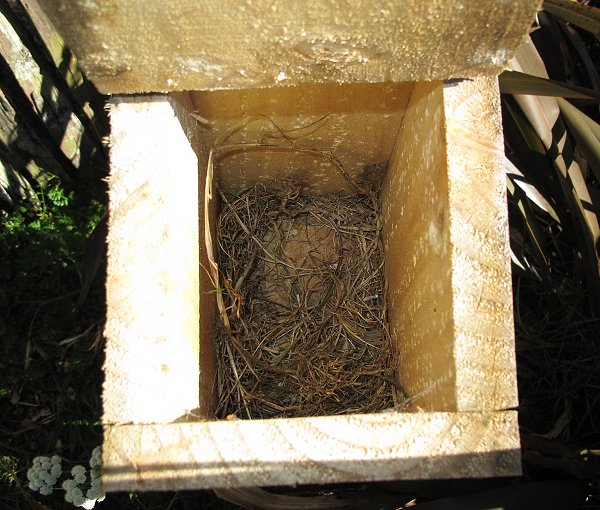 It looks like somebody might be preparing to move into the little nesting box by our gateway at last, a year after it was built. 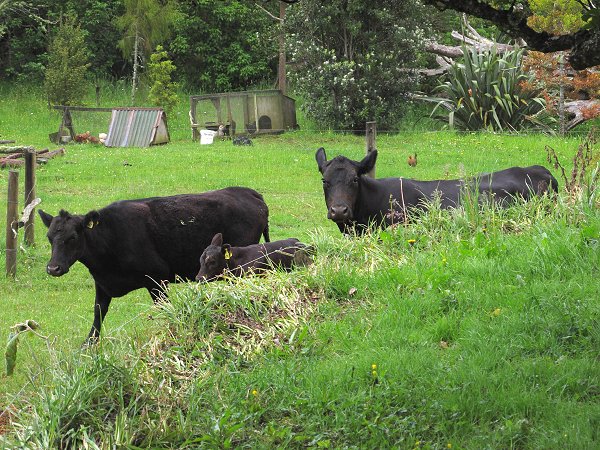 Stephan has deliberately got Dexie 101 hooked on molasses, so that when he calls in the morning, both she and Zella will come out of the paddock so that Zella may be milked.  It is that convenient pliability which makes Dexie a more useful companion for Zella than her former paddock-mate, 657. 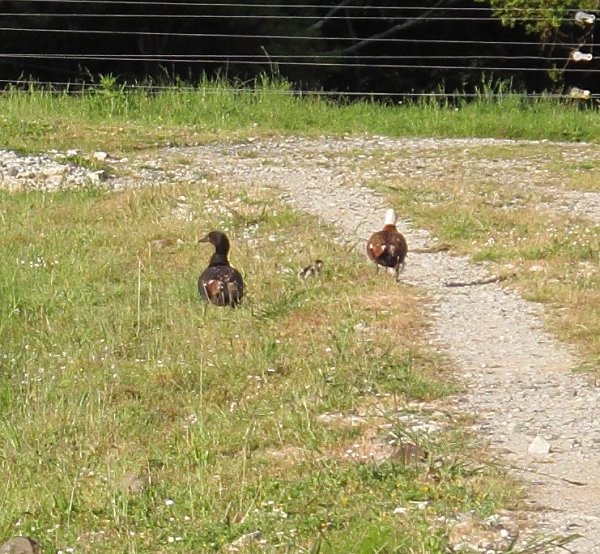 I saw this family yesterday, half-way between where they were on Saturday and here.  They really move around a lot, having travelled at least 500 metres with their two tiny chicks.  It is impossible to tell which pair of ducks they are, whether they're really the ones from this paddock, or the pair which would normally stay in the Mushroom 3 and Bush Flat area where I first saw them.  I think the former is more likely, but there must be some danger which has prompted them to move such a distance from where their chicks hatched. 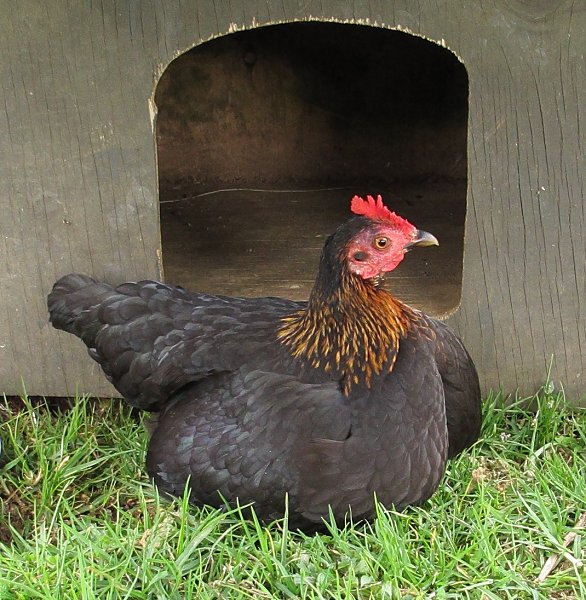 When I arrived home Stephan showed me what he'd found this morning: this is not just a bantam hen... 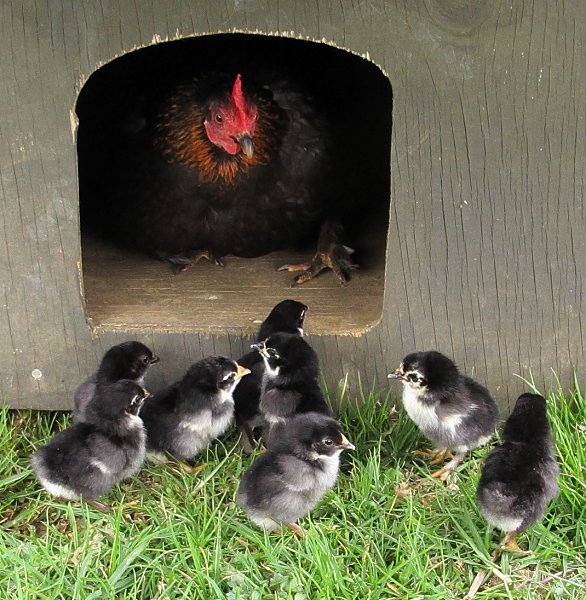 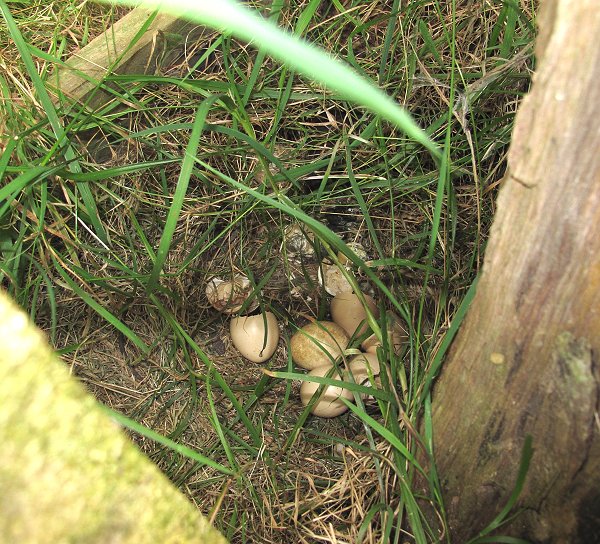 I thought she was sitting somewhere, from her behaviour whenever she appeared around the house, but since she's been a free-ranging bird and the rooster spends most of his time in a cage with the other hens, neither of us had considered the possibility of chicks.  The mechanics of such a mating are confounding, he being such a huge bird, and she such a small one.

Stephan heard a lot of cheeping in response to the clucking of the hen when up at the big shed, then found the nest and grabbed them all while he could.  Left to wander freely, the chicks would gradually disappear, probably as stoat prey, or hawk lunch.  In a cage, they'll be safe and can be fed. 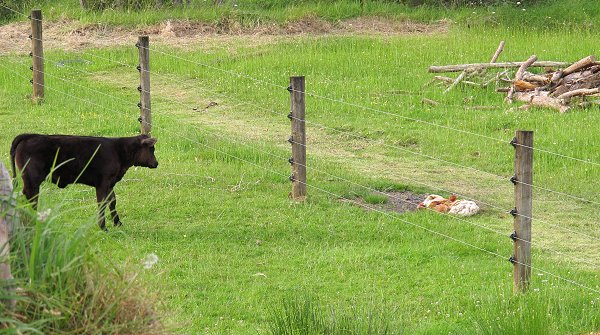 Curious calves are funny to watch when they see something new.  Dexie's daughter spotted the hens enjoying a dust-bath in a patch of bare soil - I think it's the site of the bonfire from Stephan's birthday in May.

The new fence around the extended Native planting area has appeared while I've been working at school.

I had the morning off, but it rained, so no orchid spotting was possible. 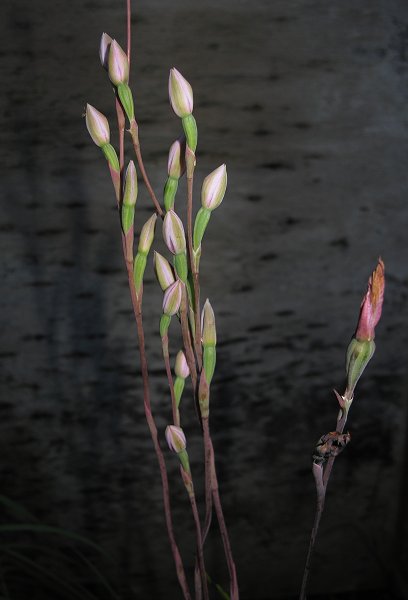 These are the buds of the orchid plants growing beside my greenhouse.  I hope I'll get to see them open!

The faded petals and developing ovary of the plant to the right turned out to be one of the Thelymitra "puriri", the plants originating from the big fallen Puriri log.  I'm not sure whether I brought seed over here, or it got here on its own.  It does suggest that in the right conditions, it only takes two years for plants to mature to flowering, since this piece of log has only been here for that long.