The week beginning the 8th of December 2012.
Saturday the 8th 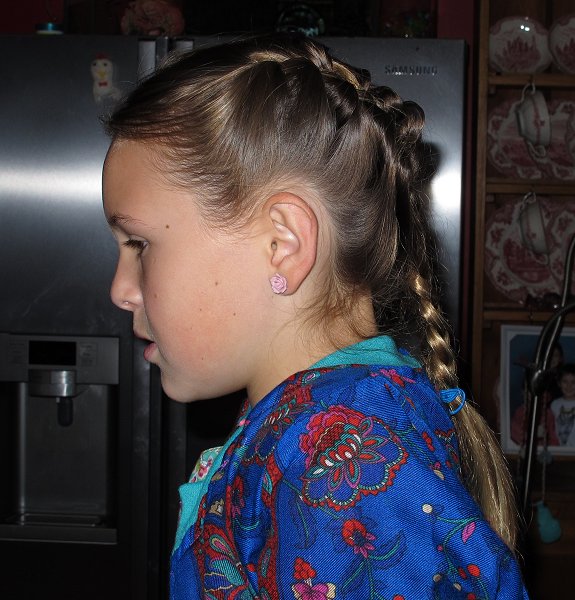 Jill and I were a bit late getting round to Jude and Roger's place this morning, but fortunately Stella seemed quite relaxed about her hair-dresser's delay.  I wasn't quite sure what she wanted, but suggested she lie on the kitchen "island" and let her hair fall back over the end, so I could plait it on either side.  I took some pictures so she could see what it looked like and approve the idea.

By complete coincidence, Stella's best friend, Matariki, had a very similar style.  That was probably a very good thing.

Jude and Jane (Matariki's mother) had finished the Korowai at 4.30 this morning.  Jude said she went to bed and got up again at 5am to write a song. 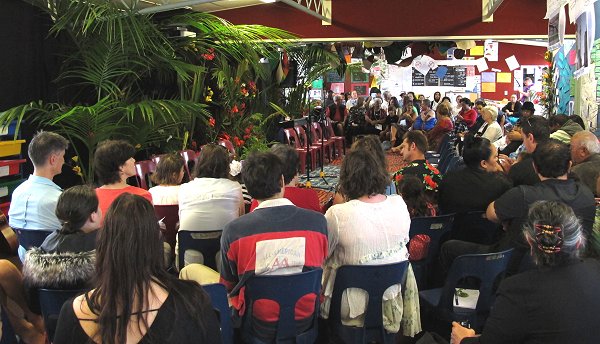 Whānau all gathered and waiting for the event to begin. 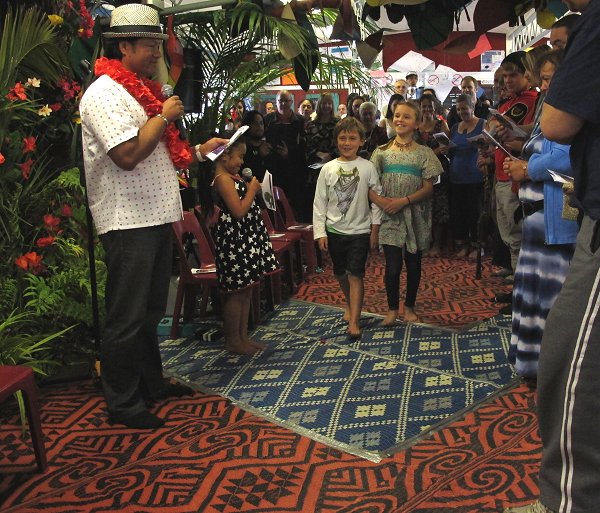 The ten graduating children were introduced individually and escorted in by a sibling, in Stella's case by Jasper. 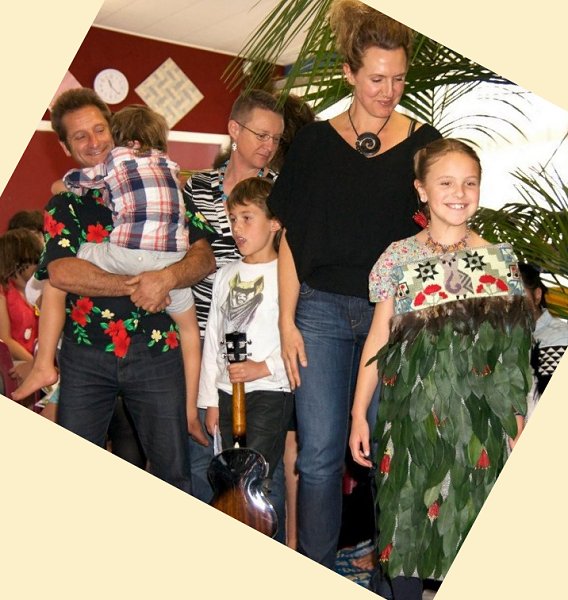 Each family stood up with their child and spoke about her (or him) and the children spoke in te reo, before their supporters sang a waiata, or in our case, before Jude sang the song she'd written but not had time to teach the rest of us.  It was, as are all Jude's songs, lovely.

Pictured: Roger (holding Louie), Ruth, Jasper, Jude and Stella.
(The picture was sent to me by Jude, taken by some unknown photographer, whose name I will try to discover.)

After the ceremony was over, everyone was fed, a hāngi having been laid in the morning and lifted in time for what became lunch.  On the back of the ute, I'd brought down one of our sheep to go in the hāngi and it was delicious!  The sheep was one of Yvette's sons; they make fabulous eating and all of that meat completely disappeared. 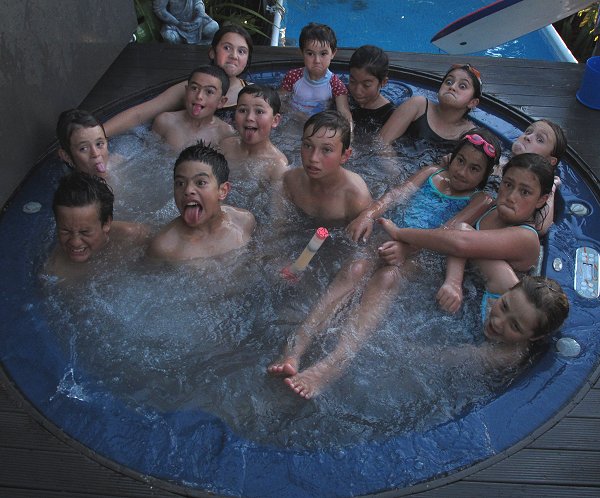 Several of Te Whānau Whāriki's students and their parents came to Stella's house for a party in the evening.  I stood beside Jude as she was taking pictures of this soup of children in the spa pool.  Pūkana!

Half of the group in their graduating t-shirts, with their ten names signed in the screen-print.

Most of them will go together to Kōwhai Intermediate School next year.

When I woke at 5am I lay for a while, then decided to get up and pack to come home.  If I'd gone to eat pancakes with Roger and Jude, I'd have ended up staying in Auckland for much of the day, but I just wanted to get home and get on with my plan to rest.

Jill is to come and spend a couple of weeks with us after Christmas, so there will be nobody home to look after her Cockatiel, Murphy.  Jude suggested that I take him home with me.  He squawked at me most of the way along the motorway, but fortunately settled down when I rearranged his perches so he could hold on more comfortably and be near me. 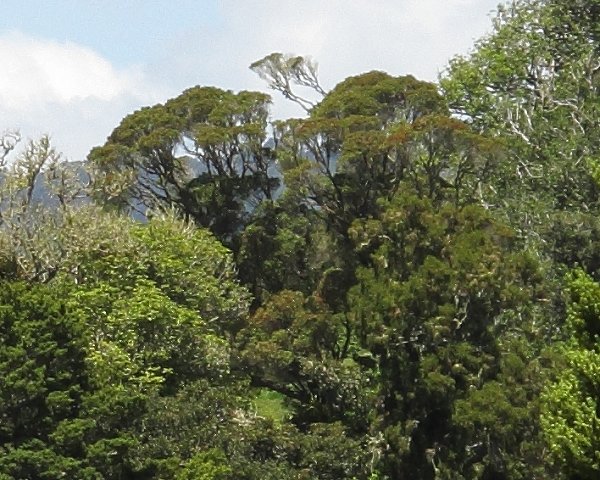 At home I peered at our big Northern Rata, looking for signs of flowering, since there are so many of the trees in bloom in the Gorge.

There's a tinge of red there, I'm sure! 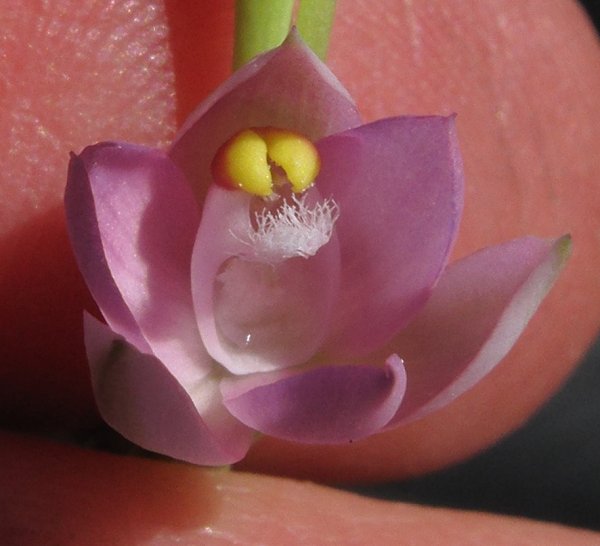 This is the flower of a plant I've been watching for three years in the Middle Back Paddock and rescued this season when it was wilting in its hot, dry location and looking like it probably wouldn't survive.  In other years, it's been eaten before it produced flower buds. 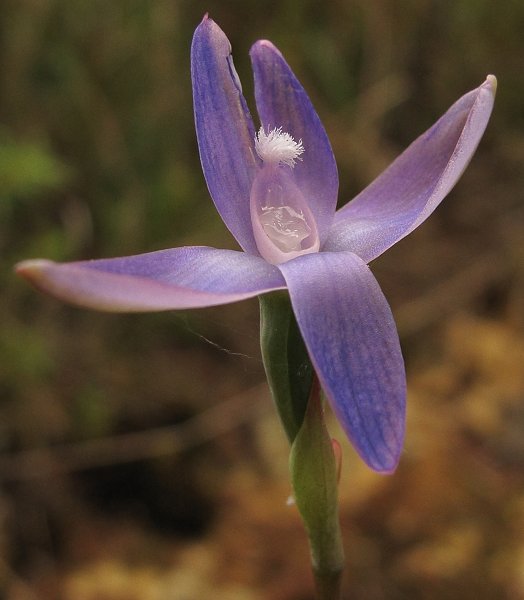 That's a weird one!  This orchid flower is missing a couple of petals or sepals, or one of each.  It also has an unusual column form.  I wonder if it's just a weird flower, or if it's a weird plant and will be the same next year?  I'll note its position and make sure it's protected, in the hope that I'll see it again next time. 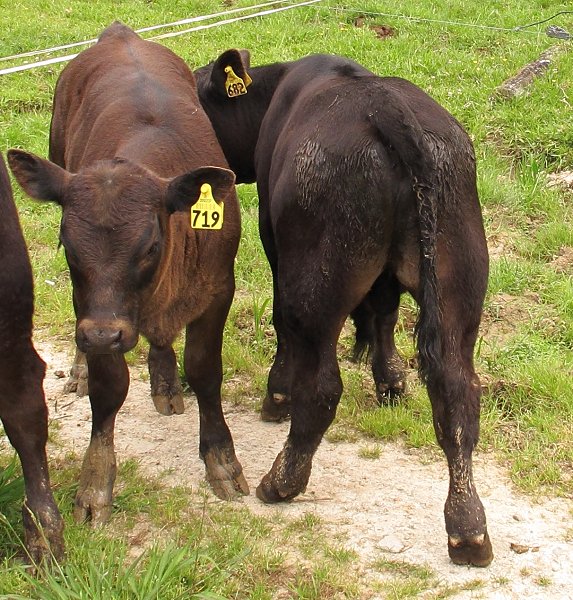 Imagen's calf has Coccidia scours (again?); I thought that had made its way through the herd and was over with.  He's happy enough, although I bet he doesn't feel 100%. 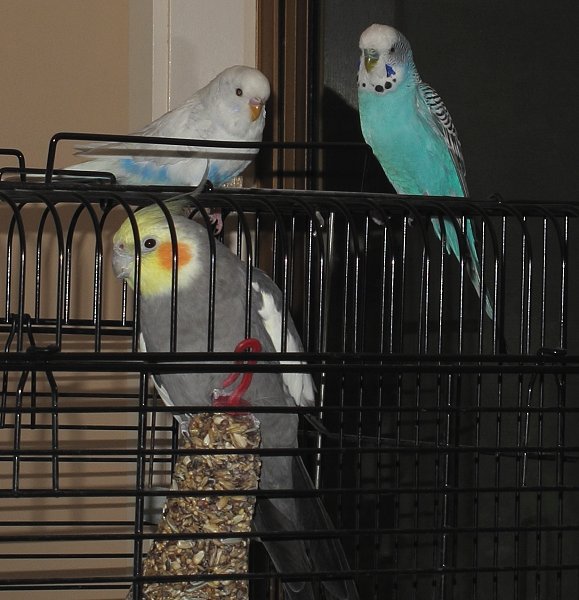 Having been advised by a bird-expert friend that Budgies and Cockatiels get on together alright, I let them all out for a fly around the kitchen.  Murphy will sit on my hand and accept a stroke on his head, but the Budgies have to be tricked or trapped to get them back into their cage.

We attended the funeral of Rex Masters, a life-long resident of (near) Kaitaia.  We've known Rex only a little, but always enjoyed his company each time he's come to select a bull in recent years.  As unhappy as it is to lose a beloved father, I envy his daughters and son their long relationship with him.

Before attending the funeral I had been thinking that it is rather sad that many people speak at funerals to say the things they didn't get around to saying in life, to the departed.  Not wanting to be one of those people, I wrote a short letter to my Godfather, to go with a Christmas card.  Hack was at the funeral, but we said we'd pop up and see him after we'd finished our shopping.

Moving the cows in next to the bulls was a bit of a tease.  Poor bulls. 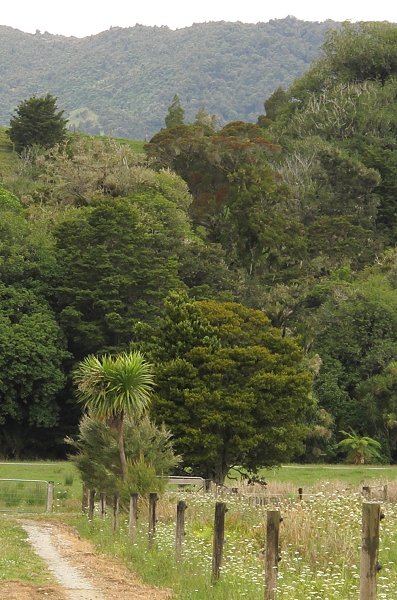 There's something pretty special for me about this tree flowering, although I can't articulate what it is that makes it so.  It has only flowered once before during my time here, in 2007. 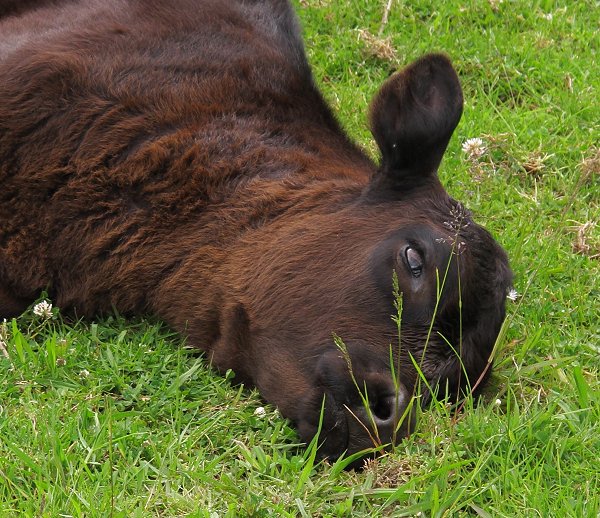 Queenly's daughter, 118, in the middle of a dream - funny how they sleep with their eyes partly open.  She twitched and snuffled and her eyeball jerked around.  Eventually she woke up and looked at me as if I'd dropped out of the sky. 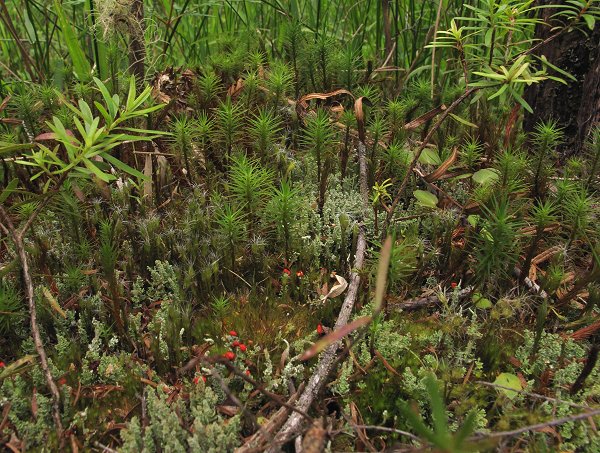 A tiny forest of lichens and mosses. 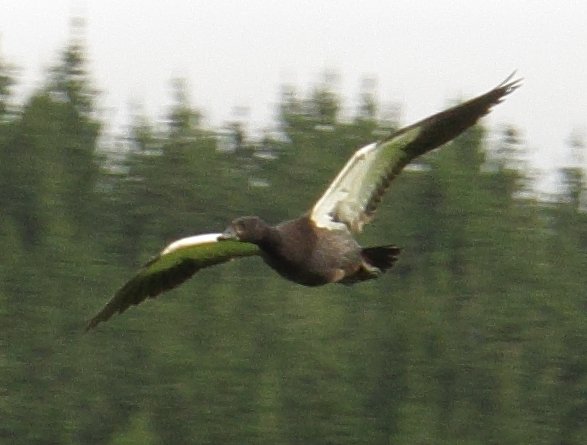 Riding back down the track, I disturbed the Putangitangi pair with their two ducklings.  While the chicks ran for cover, the parents tried to lead me astray with their dramatic injured-duck display.  When I'd gone far enough away from their chicks, both took to the air and this is the male as he flew over me on his way back to rejoin his partner and their offspring. 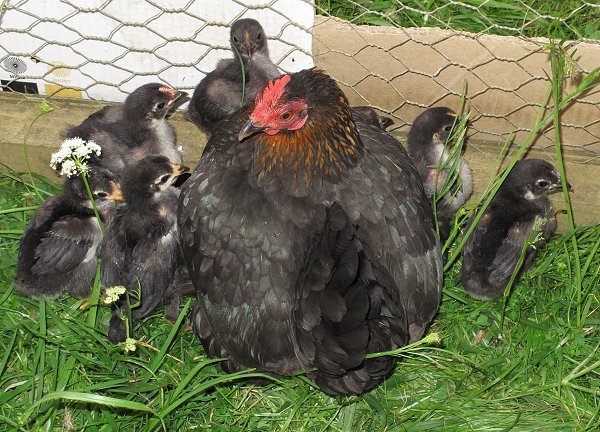 Little hen's chicks are growing well.  The two sexes are distinguishable already, with the males' combs being far more pronounced already than those of their sisters. 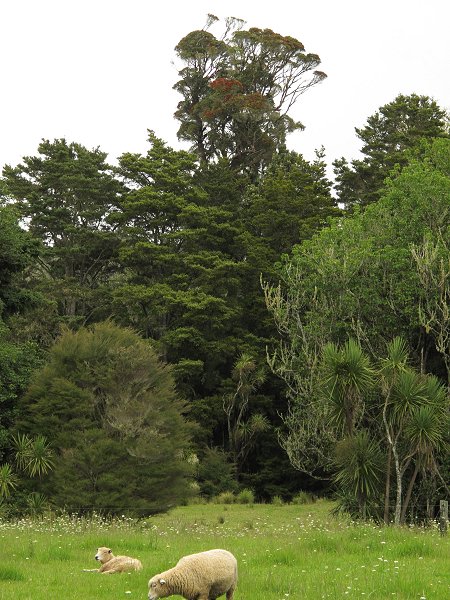 The Rata, still getting redder by the day, across the Pig Paddock.

Ancient Yvette is lying down in the picture.  Her future must be getting quite short now; she's looking very old.

Yvette appears to be on heat, with the cryptorchid ram/wether taking a keen interest in her today.  Now that he's behaving very much like a ram, I think we may need to arrange for some sausage-making.  Even at his relatively young age, his meat will probably have quite a strong flavour because of the circulating testosterone. 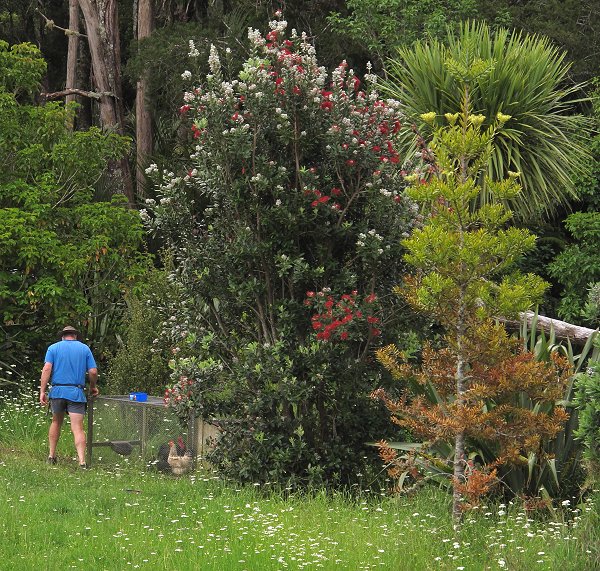 The chickens live in very nice surroundings, in the shade of the trees in the Native area at the bottom of our garden.

Those trees are really growing well.  The Pohutukawa is going to look lovely in the next few days, with its red blooms. 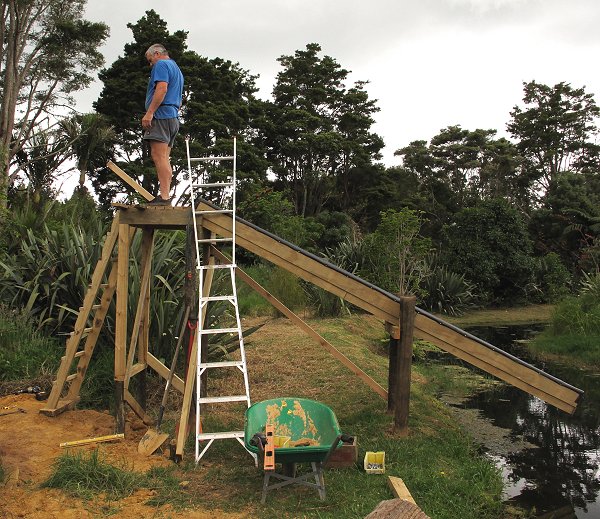 Stephan constructed the slide's platform while I was away and today he got on with making the ladder and railings at the top, to stop people from falling off the wrong way. 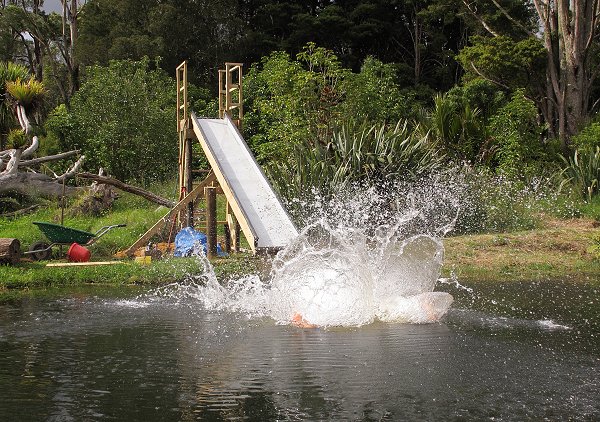 He had to test it again when he was finished. 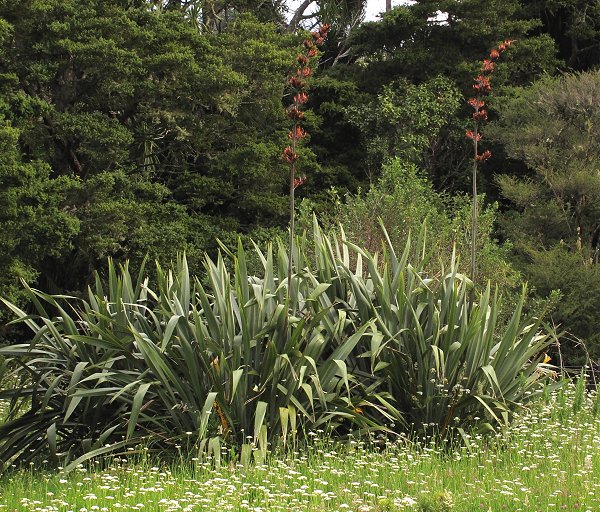 These flax plants at the back of the house had over twenty flower stems last year and this season they've produced only two.  I wonder whether that's the result of the cold spring, or do they have on and off years? 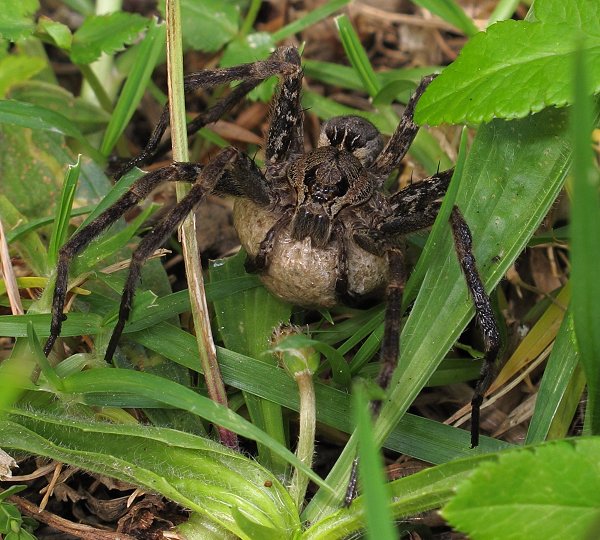 When washing the outside of the house this morning, Stephan discovered this rather large spider.  He wasn't sure exactly where it came from.  It's a Nursery-Web Spider, away from her nursery, but not without her charges. 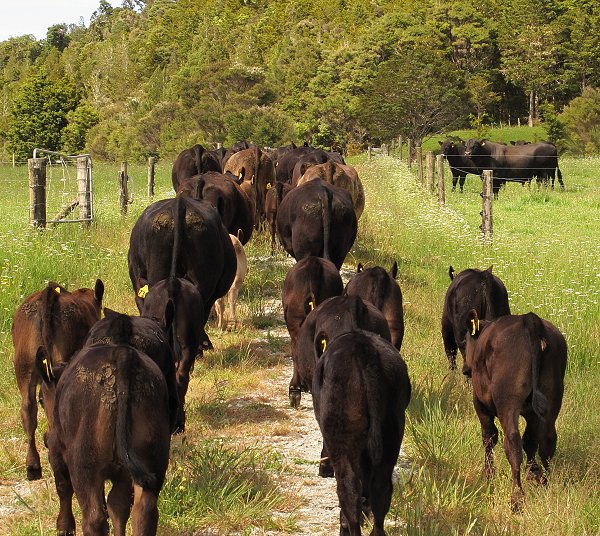 I moved the cows out of the 5a paddock (on the right of the photo) and up the lane.  Two cows were on heat, so the bulls were even more excited about their proximity than yesterday.  I'll put the bulls with some of the cows in a few days. 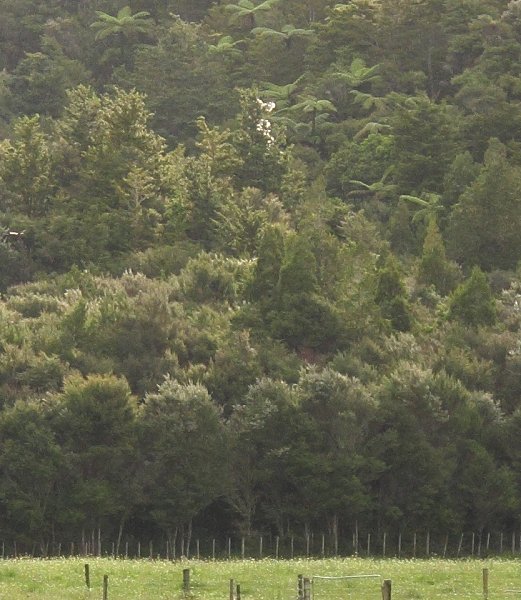 This evening was slightly cloudy, with breaks letting the sunshine come through and I happened to look over at the bush block to see something shining very brightly in the trees.  When a cloud passed before the sun, it disappeared.  We both watched as it gleamed again in the sunshine: Clematis seed-heads in the top of a Totara tree.

I think it's the same tree as the one I pictured in November.  The seeds hang on for a long time.  Close-up they look like this. 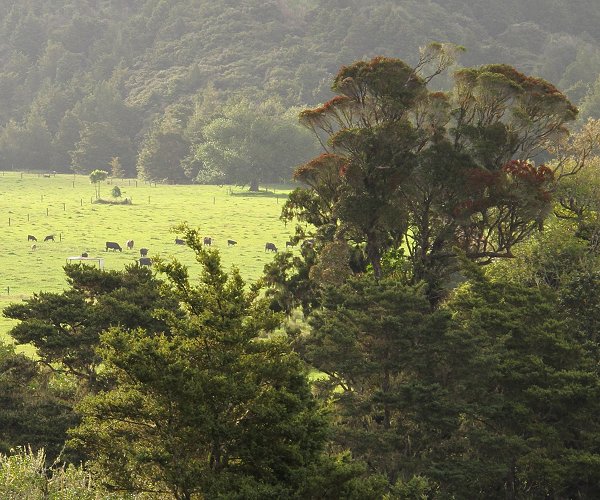 The Northern Rata from the hill over the road. 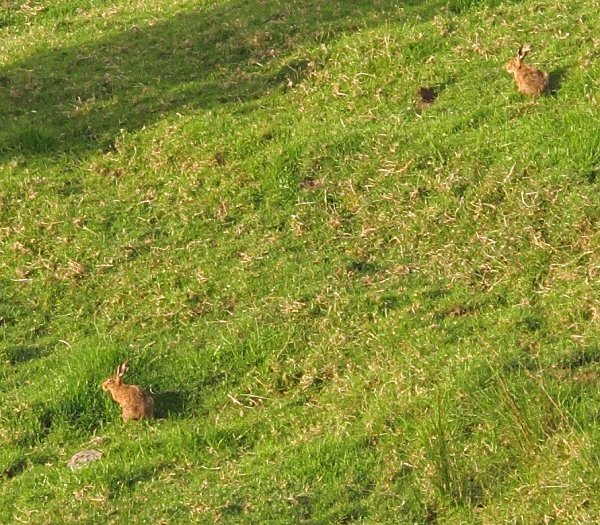 Two hares, within a few metres of each other on the side of the hill.  They seem to be very solitary creatures, generally.