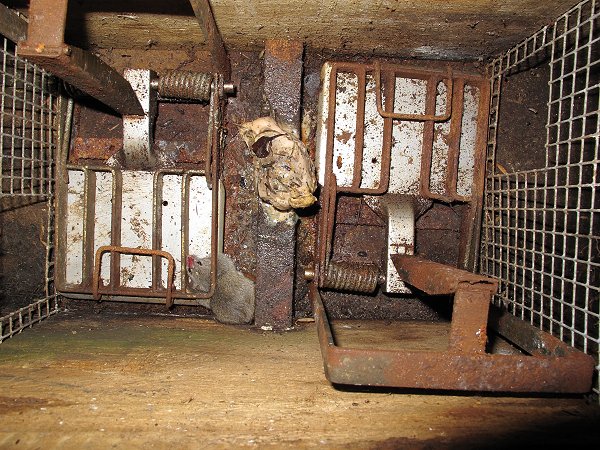 The vibration of the trap shutting on the tiny mouse would have been enough to set off the trap on the right as well.  The mouse was obviously on its way out.  This just goes to show that it pays not to make a fuss and stamp your feet if the food isn't up to your expectations!

Mike and son Stuart had come out for a walk with us around the new swamp reserve and we were checking some traps along the way. 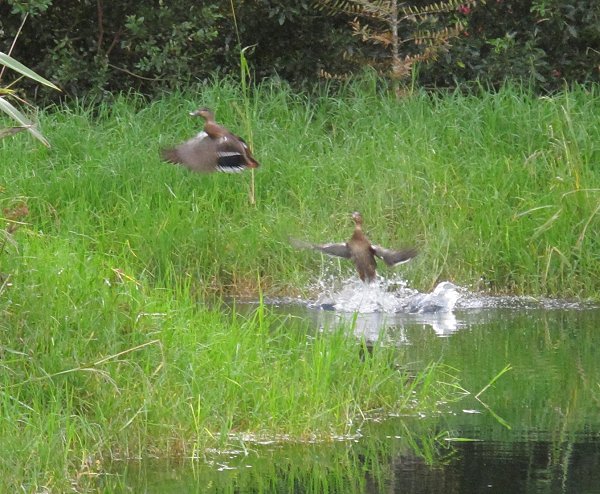 A couple of Mallards landed on our pond, but they weren't keen to stay and have their photo taken.  At this time of year, ducks aren't keen on people pointing anything at them - it's duck shooting season. 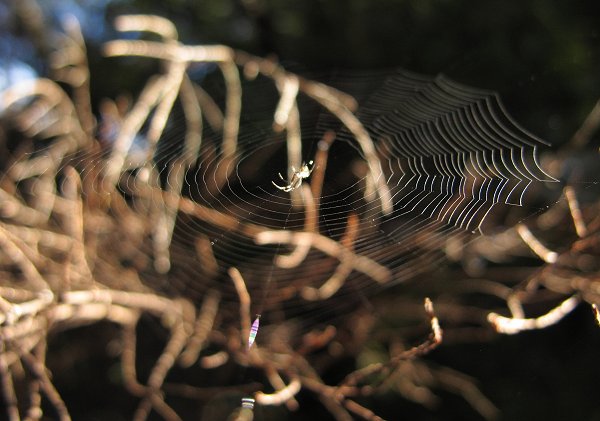 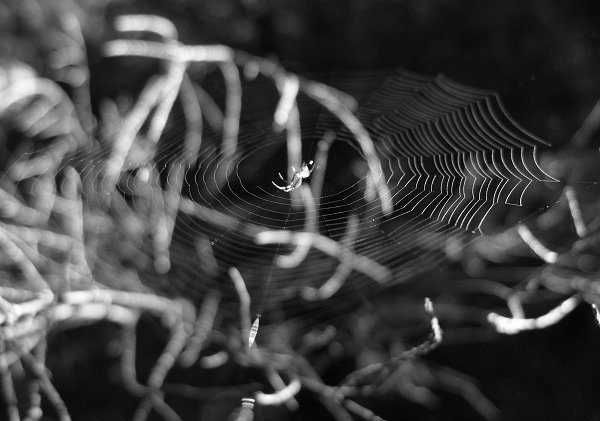 This is not the best photo, but it struck me as sort of arty.  I like the finely detailed lines of the web in contrast with the fuzzy out-of-focus twigs.

I had walked under the branches in which several webs were glistening in the damp morning air and deliberately went back to them afterwards, because I noted I have lately been walking past things I would once have stopped to photograph.  I have not been taking my usual delight in my surroundings.

Later I wondered if the picture would work better in black and white?  It will change every five seconds. 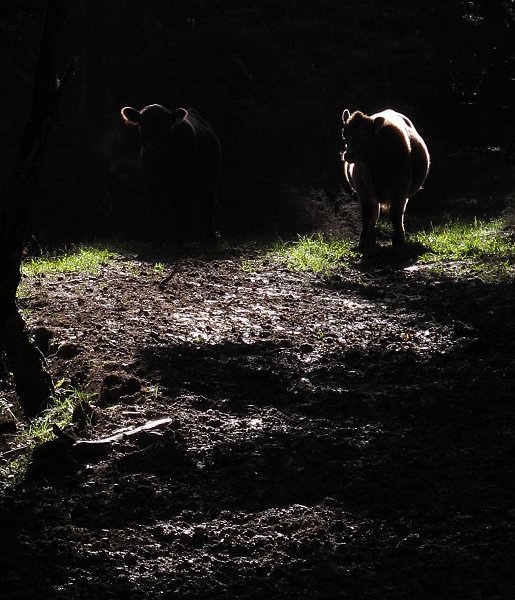 Another picture I knew would not work as a "proper" photograph, but I do like it.

These were two of the four calves I was walking around the Frog Paddock looking for.  I'd heard them coming around the hillside and hoped they'd make their way down without my having to go and fetch them.

The other calves had all come down yesterday and I'd hoped the missing few would realise everyone else had left and follow them. 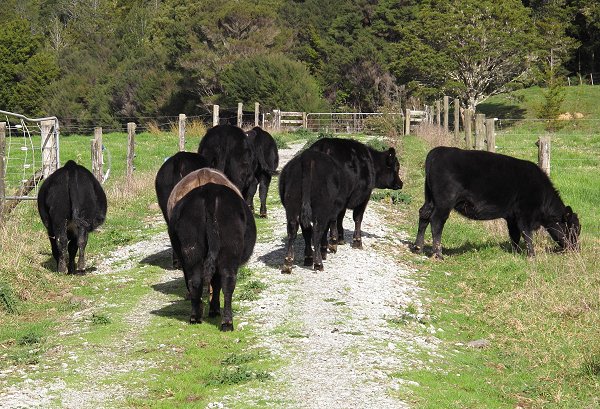 The nine calves I'd been out to get, as they wandered up the lane.  I drafted the heifers to the right and the steers to the left, because the steers will be leaving home in a week or so. 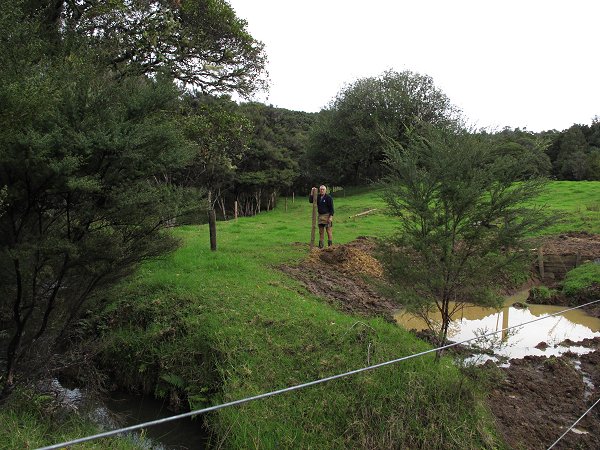 Stephan, well advanced in fencing from the Bush Flat's new culvert entrance, around the silt pond and along the edge of the stream.

I turned the computer off this morning because we were about to go to town, then remembered something I needed to look up before going.  I turned everything back on, but it told me something was corrupted and it was going to shut down again in fifteen seconds, which it promptly did!

My usual local computer fixer has been charged with some revolting crime and presumably disappeared out of the area, so I phoned a friend whose husband has recently advertised computer services.  She was sure he would deal with the problem if I dropped it off to her at work in town.  Marvellous!  I'm glad I didn't discover the problem after arriving back home later on.

I fished out the old machine and connected it up and updated everything and carried on.

I'm not very good at backing up, but I'm also not entirely remiss, and as L-J had built me a computer with a mirror hard-drive, I was reasonably confident that I'd not lose any of my material.  But all the recent photos were only in the computer, so I was a little nervous.

Gaye and Brian came for dinner - we're still thanking each other for our holiday breaks, and enjoy each others' company.  Stephan made Crème Brûlée for desert.  We haven't had that for ages.

There was rain and thunder and the day was dark, grey and cold.  No photos. 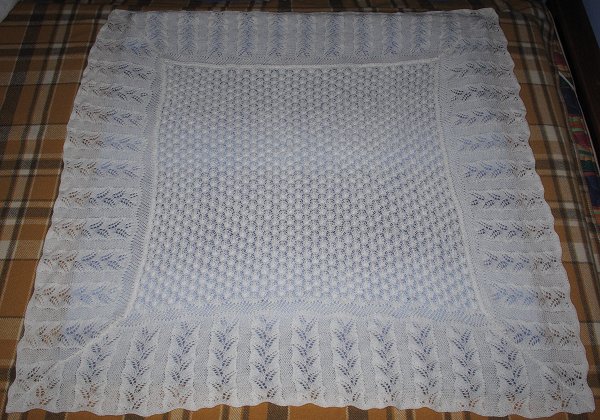 Shawl number four, I think.  This one I offered to Charmian, whose baby shower Stephan and I attended last year.  I really did mean to finish it by the time the baby was born in February, but as it was terribly hot then anyway, I don't suppose it matters that he'll only get it now, as the weather begins to cool. 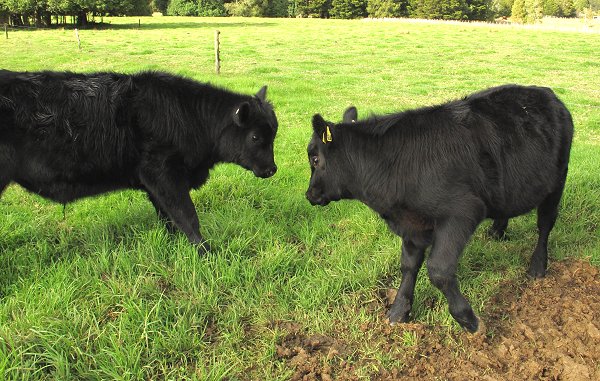 I took the orphan 684 and Zella's son up the lane to put them in with the other steers this morning.  I was a little worried that the two "new boys" would get a hard time from the others, but 684 bullied everyone else into submission.  It's funny watching their personalities, seeing those with really assertive natures who naturally sit at the top of the pecking order, and others who will never assume that position.  The really strong ones, like Imagen in the cow mob, never have to physically prove anything, because they have the ability to convey their superiority without any sort of challenge. 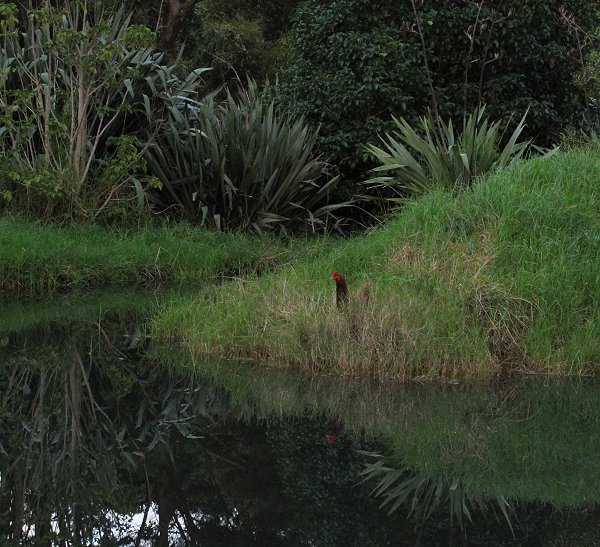 Goodness knows how this hen got onto the island, and she certainly couldn't work out how to get back again.

Stephan went across the "bridge" and rescued her.  She's one of the ex-battery hens from brother Richard's place, so she's reasonably tame and easy to catch.

We went to Whangarei for the day, stopping on the way down to deliver the shawl to Charmian and Paul and baby Sebastian.  In Whangarei Stephan went to a specialist wood supplier to stock up on the timber he uses to make cheese presses.

I went hunting for a few things we can't get up here.  I also visited a couple of second-hand stores looking for knitting needles.  I have a good selection of ordinary needles, but as I'd previously been unable to knit with short double-ended needles, I only had the odd one or two in my collection.  When old knitters die, their needle collections generally end up in a charity store somewhere, for me to go and find.  I also discovered a couple of ring-bind folders of good clear knitting instructions and stitch selections, which should prove handy for children's knitting lessons and learning new things, myself.  I left the folders with the very dated garment patterns on the shelf.

We arrived home just before dark, in time to milk Zella.