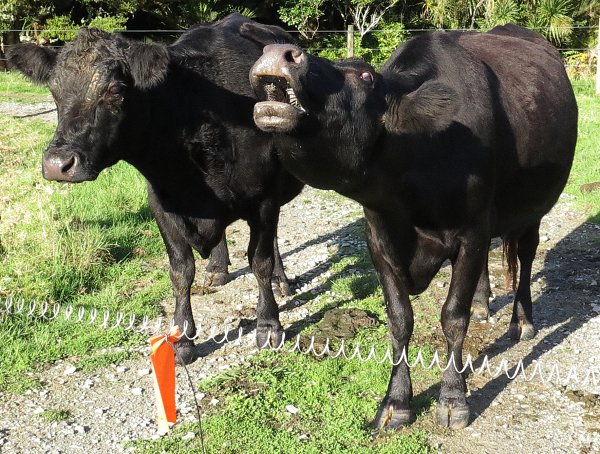 I flew home from Auckland early this afternoon.  As we'd arranged, Stephan had already separated Zella and Imagen from their calves - or rather, simply not reunited them after their usual night apart.  They're not very happy.  We'll milk Zella twice a day for a while now, since Stephan's around all the time.

It's a deafening experience standing this close to a yelling cow to take her picture! 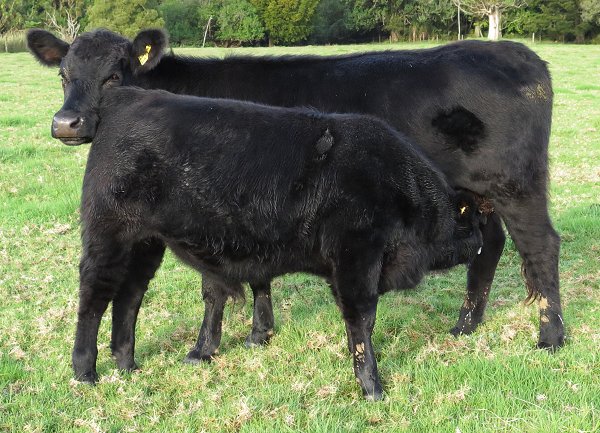 The last of the calves to wean are the bulls, which I went to bring in from Flat 2.

This is Emergency and her calf, 134.  I plan to keep him as a bull I can safely use over the heifers next year.  I didn't weigh him for the first time until he was 11 days old and 48kg, but as he was born without any trouble to his rather small mother, he was likely to have been no more than 35kg and will probably sire similarly easily-born progeny.

Emergency still looks terribly young to me, but she's done a good job with her son and maintained her own condition well enough.  The calf's last weight (at six months) was 247kg, which isn't bad for a first-time mum.

I expect her to calve again at the end of October, which means she'll have her second calf within a year of the first.  That is as good as it needs to be. 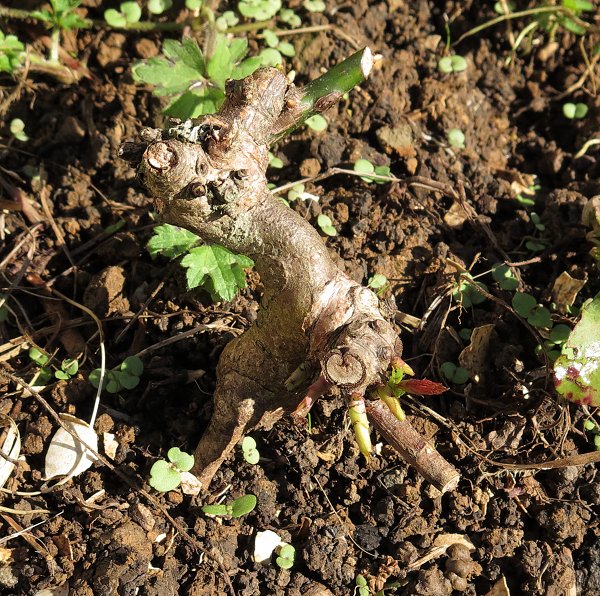 Two weeks ago William carried out a severe (accidental) pruning of one of my rose plants with his lawn-mower, having not noticed it amongst the Kikuyu grass.  Fortunately that treatment appears not to have knocked it back very much and it's now sprouting several new shoots. 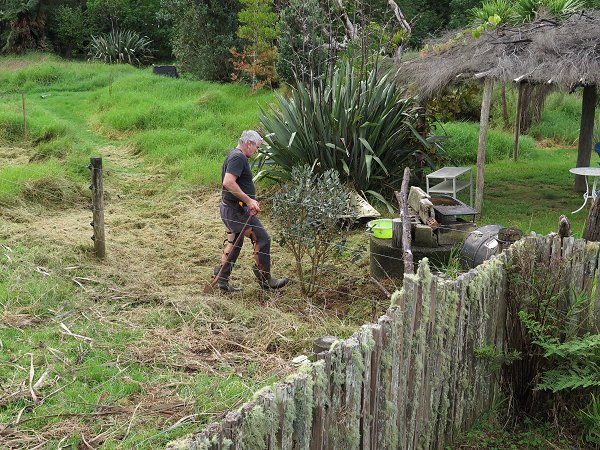 Now that Stephan has been told he can put his boots on and not to worry too much about his toe, he got out and moved the first of two Feijoa trees which we planted without enough thought - or then planted flax too near them without thinking about how big those plants would get.

He spent a couple of hours working and then had to return to his chair and keep his foot elevated for the rest of the day.  Getting back to work won't be a fast process. 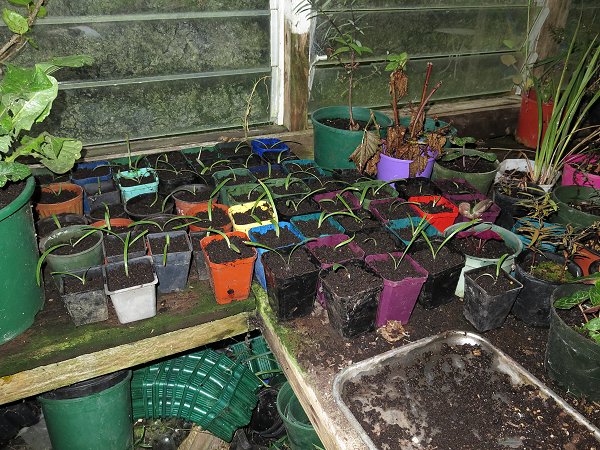 I spent a couple of hours in my greenhouse, potting up the little Amaryllis plants which grew from the seeds which set from this flower.  There are 55 of them!  I don't know anything about their colour inheritance.  If they mature and flower, it'll be interesting to see what happens.  They might all be red. 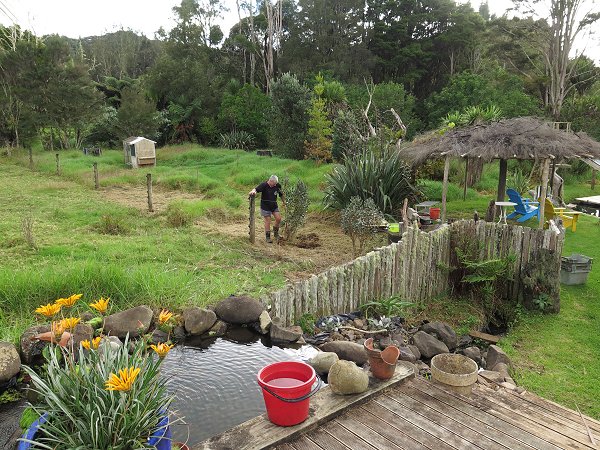 Moving the other Feijoa tree.  Hopefully they'll survive the shift. 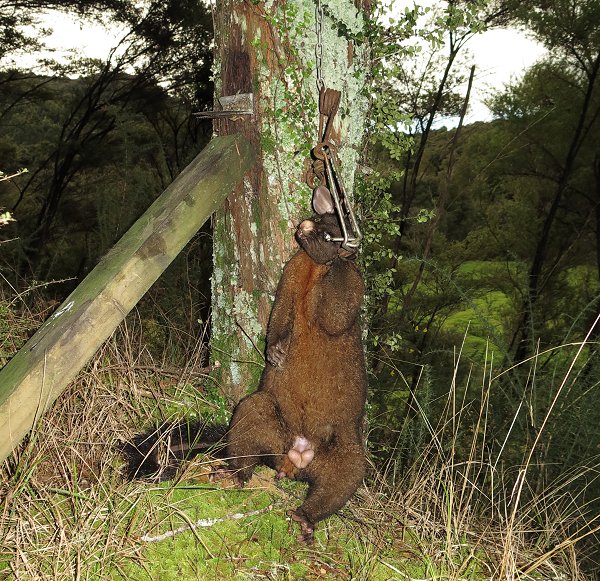 Stephan set this trap for cats the other day, but obviously possums like cat food and peanut butter too.  He (could there be any doubt?) was obviously getting a little smelly, having attracted a number of flies for post-mortem company. 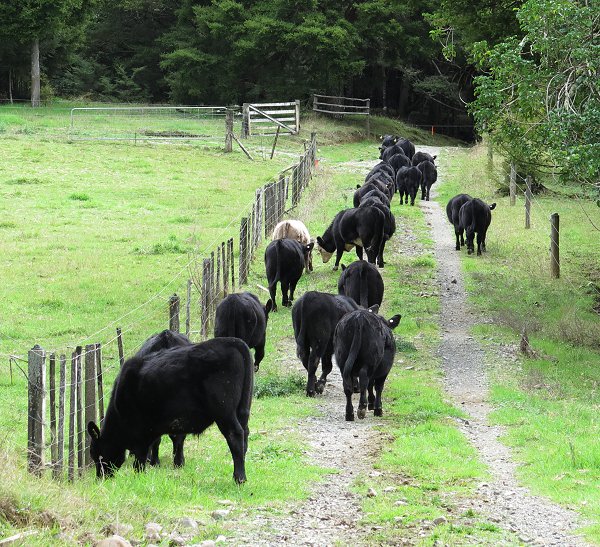 I moved my big mob of 28 weaner calves this afternoon.  I treat these movements as training exercises for them: I want them to grow up to be calm, easy to move, responsive to my requirements and all-round convenient animals.  The more quietly I complete these early movements, the easier it is to achieve those aims. 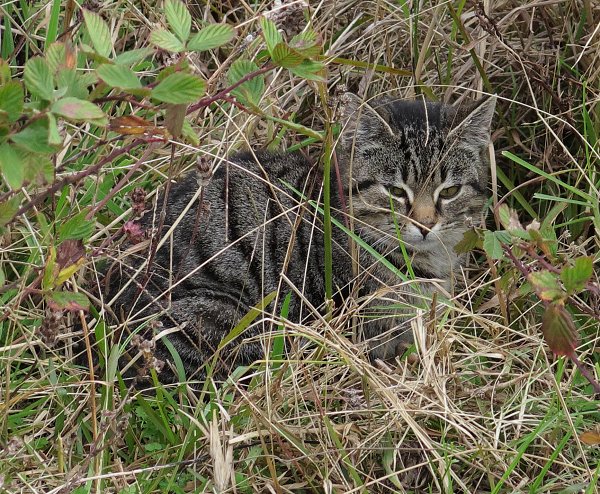 I think I saw this kitten a few weeks ago with its mother.  We've been setting traps to try and catch them without success.  I also wondered if the kitten may have been dumped, so talked to it as I stopped my bike, but as soon as I moved to get off, it shot off into the long grass.  I don't think it's had any contact with people.  It doesn't look like a happy, healthy cat to me. 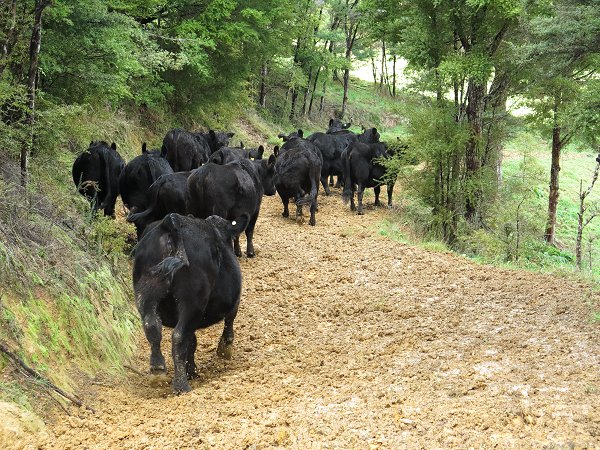 I hadn't seen the heifers out the back for a few days, but they were all happily still grazing the Big Back North paddock, although I walked the whole perimeter before finding half of them in a pocket I'd passed at the beginning of the walk.  I ought to have known they'd be not too far away from the others I found first.

They're in nice condition, most are pregnant - only one of those mated is not now, as far as I can tell.

The track here is pretty greasy after rain.  I look forward to the day we get it metalled and we all have better access up and down this hillside. 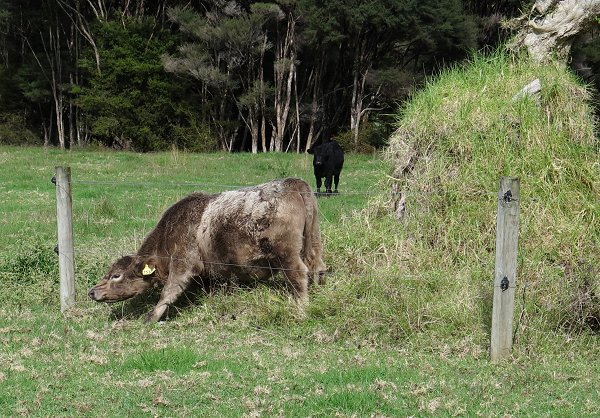 I think we need to check the electricity in that little fence: this is not the first time a weaner calf has decided it would graze the grass within the small tree's reserve area. 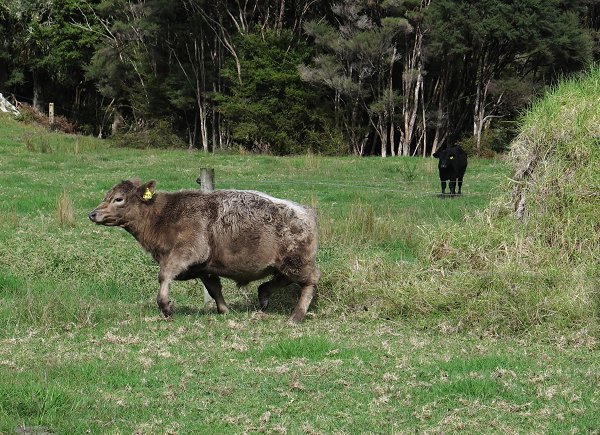 Interesting to see how they get in and out so easily.

Zella is producing a lot of cream now.  This bowl holds about four litres and each evening (after it has sat for 24 hours and I'm preparing for the current evening's milk) I have been skimming about 350 mls of thick cream off the top, which is a very nice amount for butter-making. 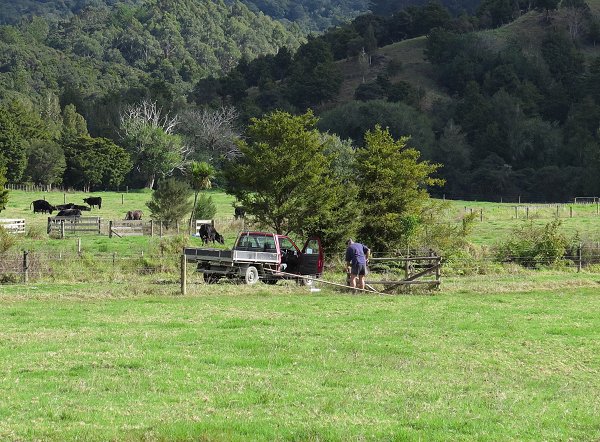 The naughty bull calves broke the railings to eat bits of the Puriri tree planted on Damian's grave.  One of them was half-way into the reserve just before I asked Stephan to go out to make some urgent repairs. 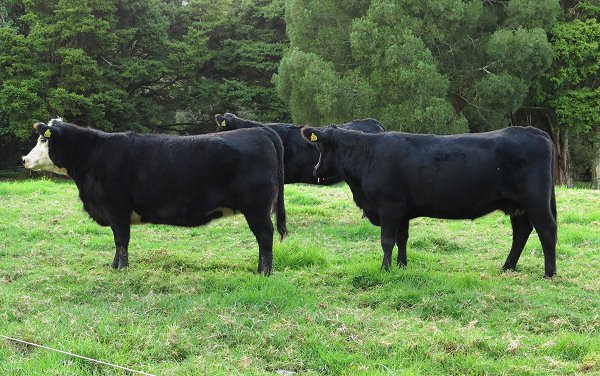 I did some cattle-swapping this evening, putting white-faced 660 (who's been keeping stroppy bull 96 company since the end of mating) in to the big mob of cows.  She appeared to have an assertive enough attitude to avoid being bullied much. 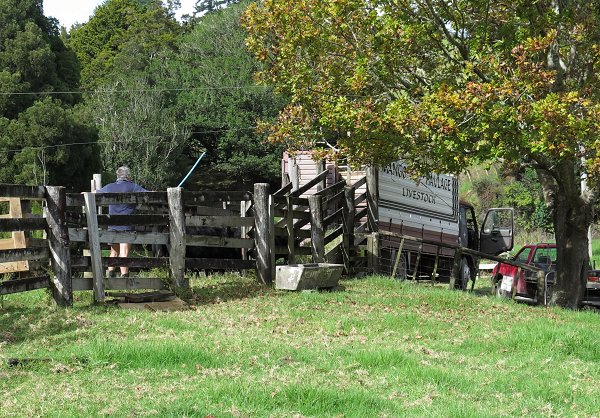 Twelve steers went off to live somewhere else this morning.  The truck arrived two hours before we were expecting it, so the driver had to wait a little while we drafted the steers from the bull calves - they'd been together for a couple of days, to make sure Zellason got to know them all before they travelled. 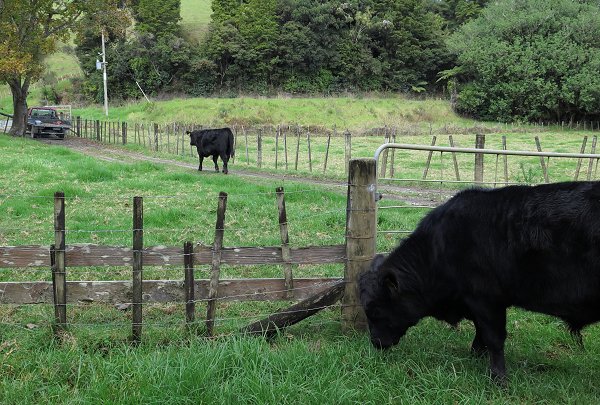 As soon as they were on the truck I heard a number of piercing calls, which turned out to be from bull 133, BroZella, who's spent his whole life with Zellason.  He walked away from the others as though he was looking for him.  He kept calling during the rest of the day.  It's tough splitting up friendships. 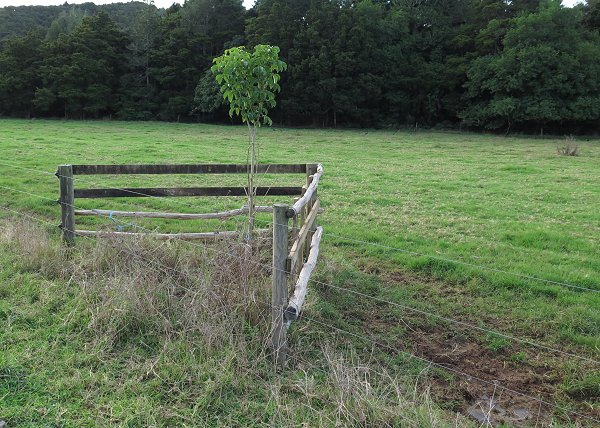 Damian's reserve is now a bit more secure.  It needs extension to cover that bit of trampled, bare earth to the right, where Yvette is buried.  She'll get a nice tree, too.