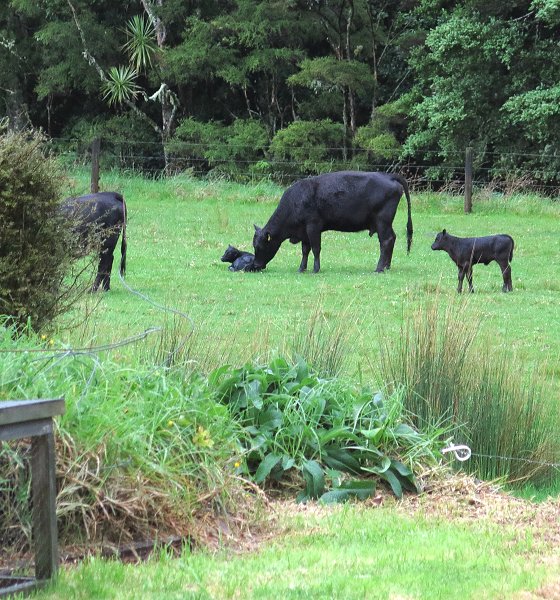 703 did this when I wasn't looking early this morning.  I felt sure I'd looked at that particular spot just as it got light enough to see.  Perhaps she was behind the hedge at that time.  It's another bull.

So far this year we have eleven bulls and four heifers.

It rained a lot in the morning, so by the time Queenly 107 started pacing around, there was water lying everywhere and all the streams were up.

This bull calf worried me a little, appearing a bit stuck at the chest, so I gave him a pull.  He's fine. 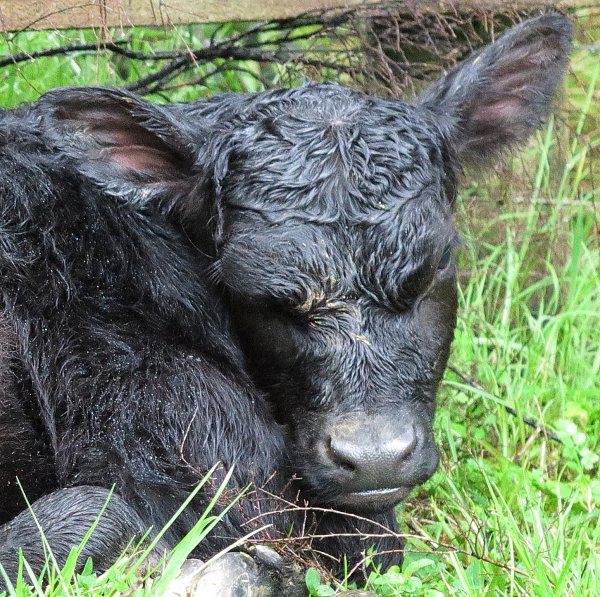 This is yesterday's stuck calf, showing some swelling above his right eye.  That side of his face would have been pressed against his mother's pelvis for several hours when he wasn't being born, his head being slightly turned in that direction. 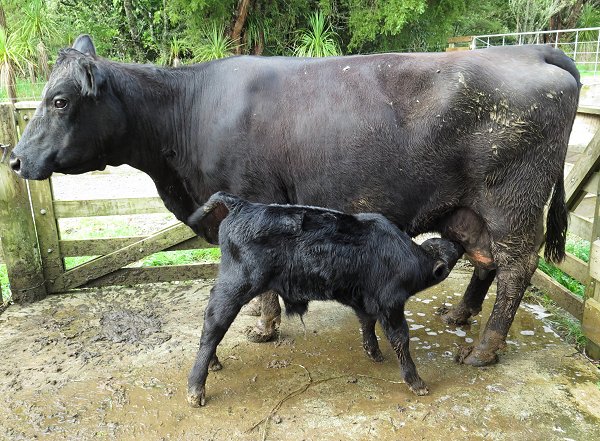 Imagen's calf is gradually getting the hang of feeding from her, although still needs a bit of help to find the teats.  At least he's been continually willing.  Having to convince a calf to try is really hard work.  This calf sucks on one of my fingers and I lead him down to the udder, then flick a teat into his mouth in place of my finger and he's away. 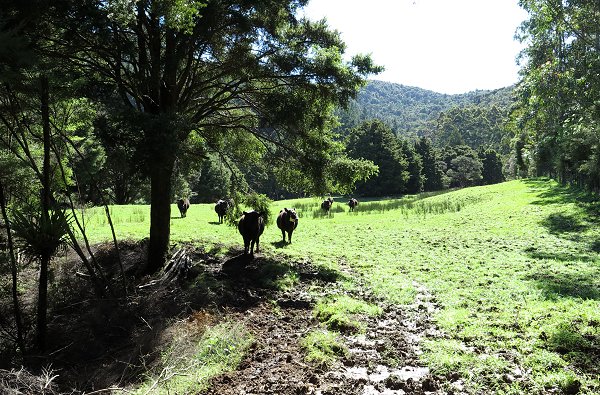 I've been watching 719, supposedly due on the 25th, but at 275 days gestation tomorrow.  Her udder is developing and I'd not like her to be out here when she calves.  Ellie 119 is also due in a few days.

The easiest way to get the two heifers out of the mob was to draft the others out of the gate into the Swamp Paddock, then take the two I wanted home along the lane. 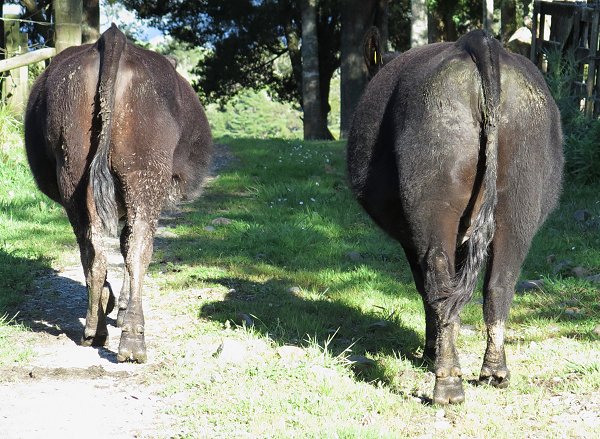 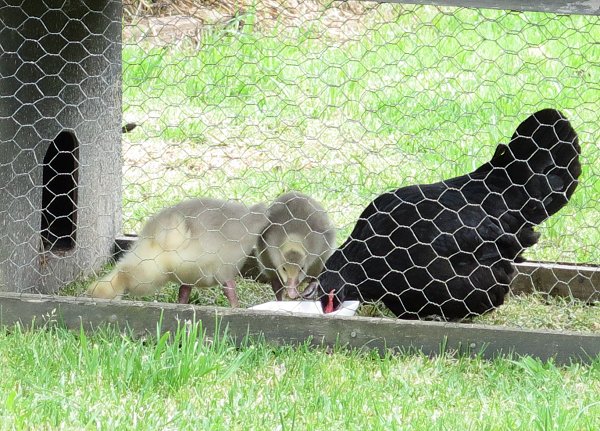 The goslings grow by the day. 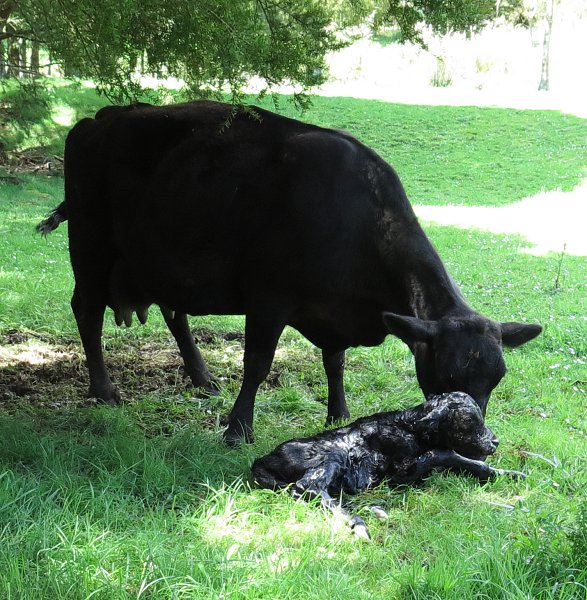 I went out to move the young heifers and spotted 548 with a just-born calf, a daughter.

548 was on my cull list last year, but I relented since the reasons for her going were not serious, more a matter of looking for space for younger cows.  Her last daughter, 728, slipped her calf (or two pregnancies, perhaps) early in gestation, so I'm pleased I may have another chance to retain a daughter of this family, having not yet decided upon 728's fate. 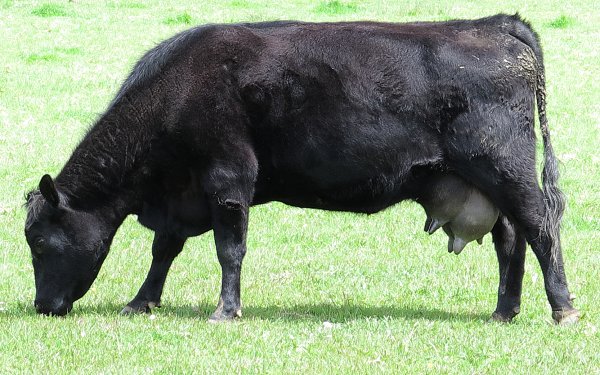 Dinky 94's udder is pretty dreadful, but things are not as bad as I feared they might be this season, after she had an apparent infection in one of her front quarters earlier in the year.  I regularly milked out the clear fluid it produced until the swelling reduced, but there was still some firmness within which concerned me.  But the calf is obviously feeding from both front teats and her udder seems to be working well enough. 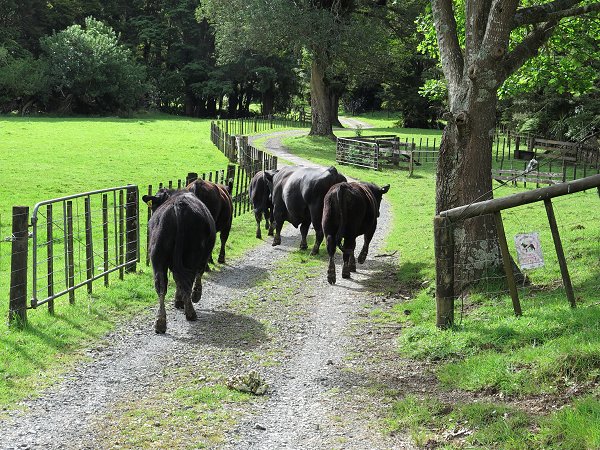 Somebody wishes to buy one of my bulls and I haven't yet had them tested for BVD.  I had also thought seriously about vaccinating them against BVD this year, partly because I'm selling one now and partly as a measure of my own occasional anxiety about the disease.

Stephan picked up five doses of the vaccine in town from the vet and we brought the bulls in and Stephan bled each one in his usual expert fashion and I jabbed each with a syringe after stroking and attempting to calm them while they were being pricked under their tails.

They behaved so well that we got the whole job done in time to take the blood tubes to town, since doing so tomorrow would be complicated. 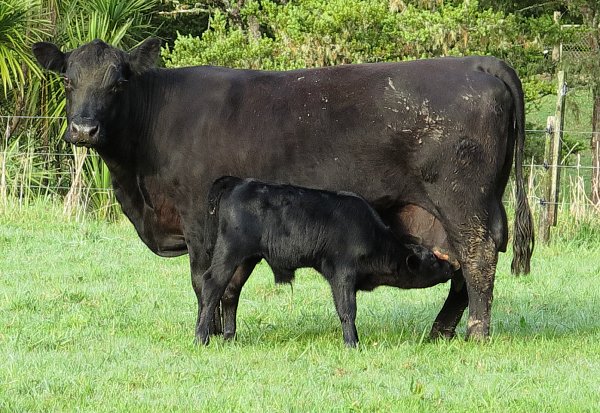 That's more like it; excellent!  Imagen's calf has been paying attention during lessons and is now helping himself.  That's another job off my daily list. 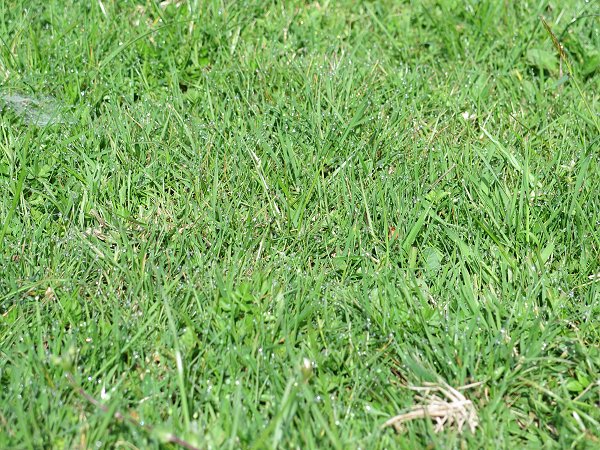 This is a picture to remind me of something, even though it doesn't show it at all.  There was a very bright thing out in the paddock this morning and I went out to see what it was ... and it disappeared.  It must have been the sunshine reflecting off a large water droplet.  As I walked across the paddock, a multitude of beautiful jewel-like colours sparkled from the grass in every hew.  It was a glorious sight and I tried very hard to get the camera to record some of it, but failed.  I like to remember such moments, hence the photo's inclusion here. 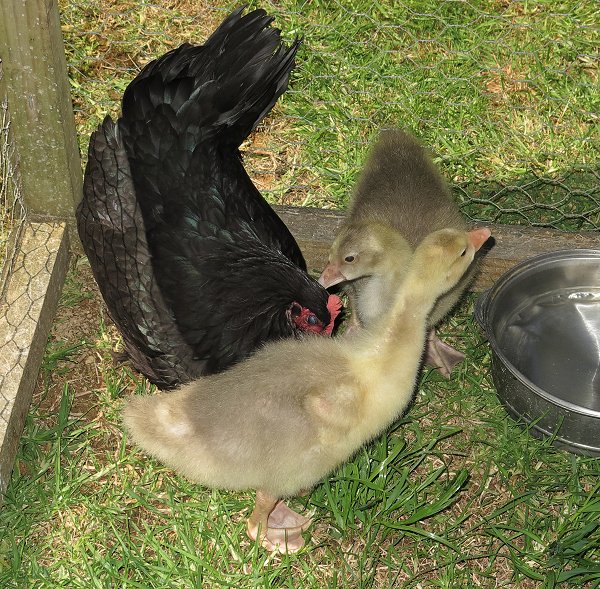 The hen has taught the goslings to fear me.  She is frightened of people because she is not tame and now she has made the goslings just as anxious every time I approach the cage.  I'm hoping it'll be reversible whenever I remove her from them.  If she were tame she could continue to be their mother and protector, but I don't want them growing up with an unfriendly attitude to people, so I'll take over their care when they're big enough to keep each other warm at night. 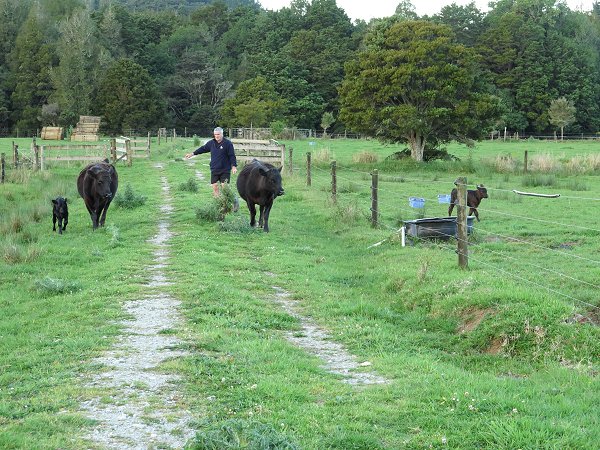 Returning from dishing out Molasses this evening I was counting calves in paddocks as usual and couldn't see the second one in the House Paddock.  Eventually we worked out that there was a distressed calf calling from Flat 2 and that there was one more black calf there than there should have been.

I don't know how she got there, but imagine she took the same route we then walked her mother and former companions, along the lane and into the paddock.  The bottom wires are all turned off during calving and presumably the calf got out into the lane, wandered too far away and then joined the nearest cows she saw.  There was a bit of fighting between the adults, but it's not that long since they met and they settled quickly enough. 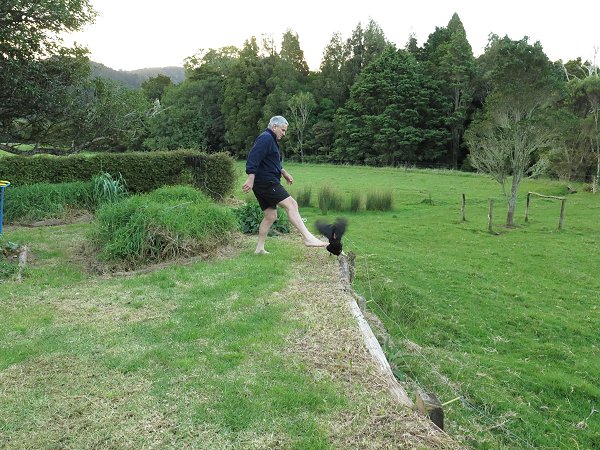 While this may look like violent animal abuse, it was a chance photo as the hen ran past the end of Stephan's foot as he attempted to divert her over the garden wall.  We let the hens out for a while each evening (after the hawks have gone home to bed) and some of them insist on coming up to the garden, which is entirely unacceptable.  We both had to close in on this one to get her to leave. 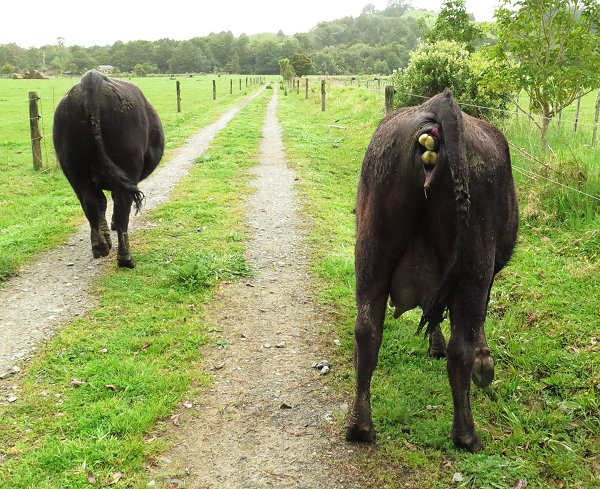 Last night just before eleven 719 had started early labour.  I went back at 1.30 this morning and there were a couple of feet and a nose bulge visible.  I watched and measured tiny progress and then wondered if things were actually not happening at all.  At four I went to bed, thinking that perhaps I was putting the heifer off her stride and figuring I'd come back and find her with a calf.

But no, at dawn I came back and found this, about the same as earlier.  I walked her down the lane, calling Stephan to bring the calving chains out, in case the heifer gave up and collapsed on the way - she was terribly wobbly from nerve compression.  But she didn't want me messing around at her rear and so we went all the way to the yards. 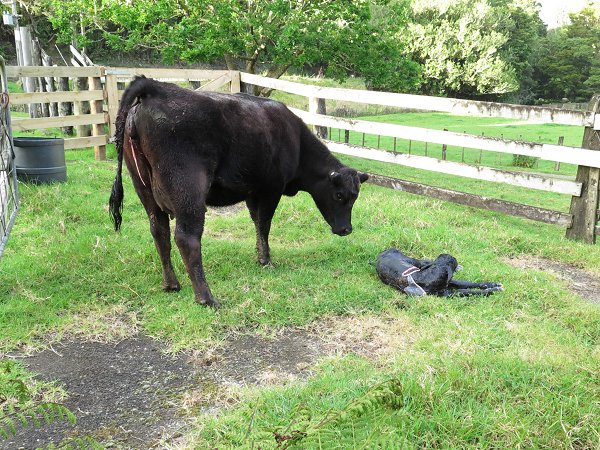 With the calving chains carefully placed around its ankles, out came the calf; another biggish bull.  We carried him back to the loading-yard grass, where there's water for his mother and no mud and put 719 in there too and left them to sort themselves out.

I came back an hour and twenty minutes later and the calf was up and feeding. 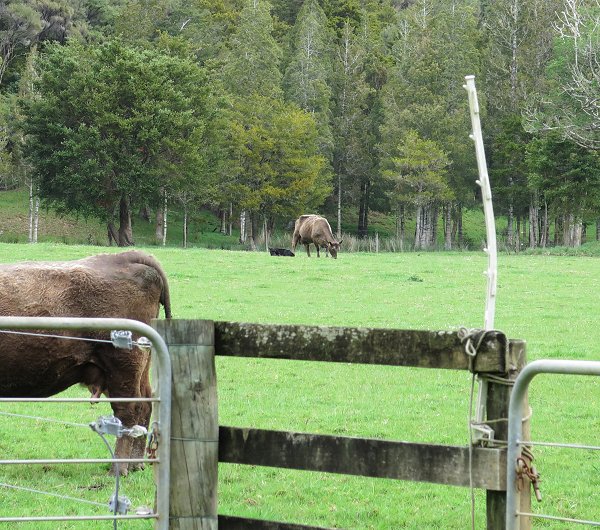 While I wasn't looking, grey 607 had got on with her job without supervision and produced a healthy calf which, upon later inspection, proved to be the heifer I've been waiting for for years.  Her previous four calves have been grey bulls.  A grey heifer would have been the most exciting, but a black one will do me just fine. 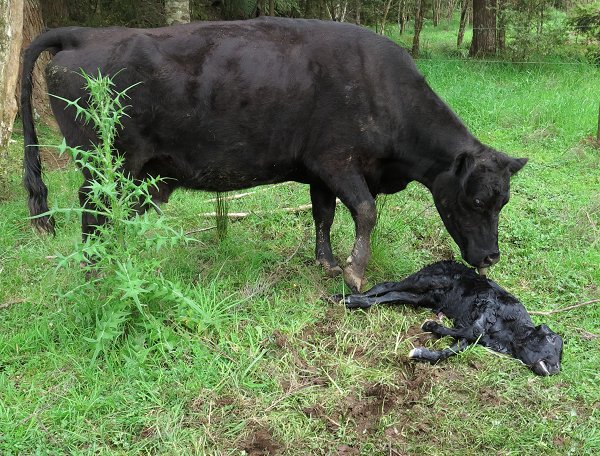 And this is why I do like to have seen cows in labour.  I had an inkling Queenly was going to calve, but got distracted with the other calving and didn't get back out here for about four hours.  When I approached her across the paddock, I could see a very flat-looking black baby, which is always a bad sign.

This calf has a strange appearance; I think it was born dead.  Its gums and tongue are bloodless and it has a strangely skeletal look about its head.  It would have been interesting to see how it was born and to confirm my suspicions.  But it might have come out head first and then I would have felt it necessary to interfere and here she is, all finished and I can leave her where she is.  I wonder about the calf's presentation because of some split stretch wounds in Queenly's vulval skin.  Mature cows don't usually show such wounds, unless they've really had to strain to get a calf out. 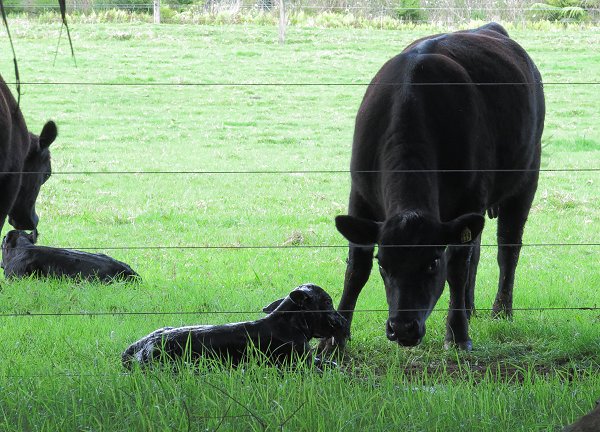 After yesterday's calf pull and dead calf, I was feeling emotionally bruised.  But this morning as Ellie 119 started to calve, I went and watched in relaxed enjoyment, knowing that as the best-grown of all the heifers she would calve with relative ease, which is exactly what she did.  I always find it fascinating to watch as the calf's head comes out, more and more of it gradually appearing despite the whole process looking utterly impossible.  After the forehead pops through, the calf only requires three or four more pushes to deliver its shoulders, chest, abdomen and hips. 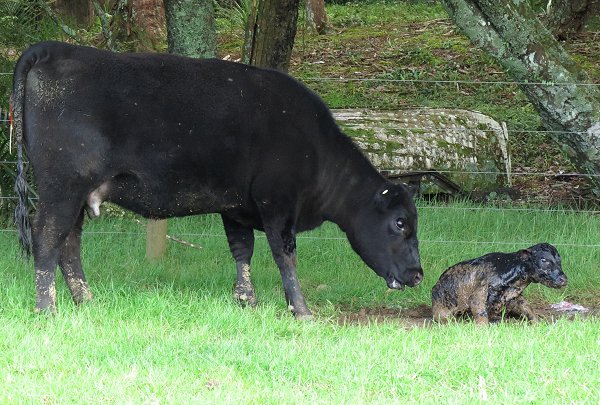 Because she'd calved on a bare bit of earth under the trees, the calf made a real mess of herself as she flopped around in all the fluids, learning about legs. 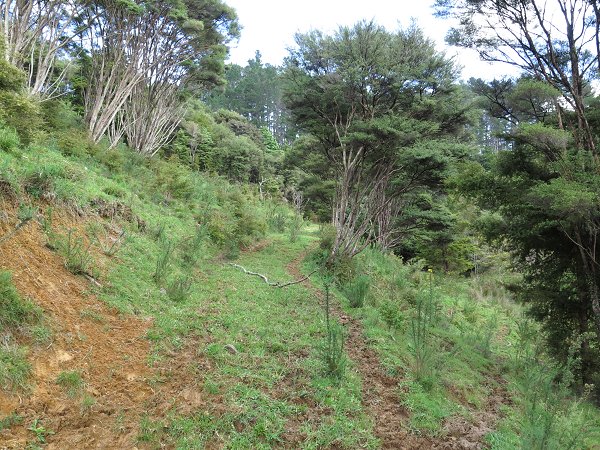 I'd seen four of the five cows in the Pines Paddock and despite going out and checking a couple of times, 657 still hadn't appeared, so I went looking for her.  I imagined the most dire things first (upside-down stuck in a hole) then gradually ramped it down through stuck trying to calve to standing over dead calf stuck in a hole, to standing over live healthy calf and all well.

I found her standing under a tree, probably in early labour, so I walked her down the hill, out of the paddock and put her in with the two grey cows, 607 and Curly, in Mushroom 1.

By 5pm 657 was in active labour and when I went past at 6.05 I could see two feet and a nose emerging from her.  When I came past again fifteen minutes later, the calf was standing up!

The calf is a bull.  I'm quite pleased, because she'll probably do a good job with him and he's a bonus calf in a way, since I'd meant to sell 657 earlier in the year, but didn't when she demonstrated too much nervousness to go off with Surprise to her new home. 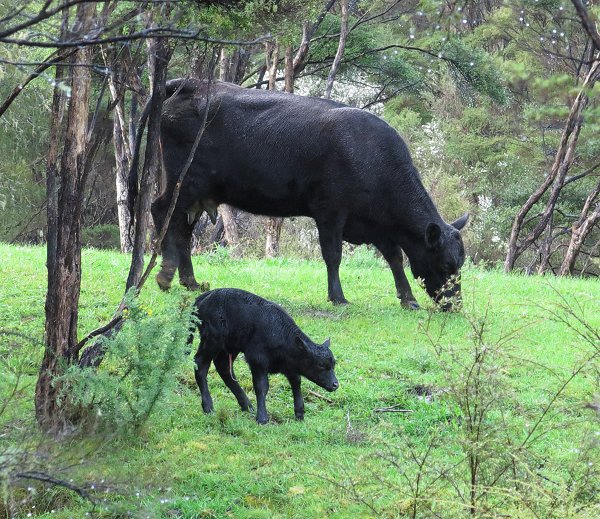 There's always at least one each year: a calf born out the back somewhere because it's earlier than I expected.  This is Emergency, who fortunately did everything perfectly and she and her tiny daughter were happily over the other side of the swirling, rushing high water in the stream.

I hadn't expected her to calve for another six days, based on last year and she hadn't seemed close when I looked at her yesterday.  The calf was born on day 271 of gestation (the normal gestation period is 275 - 290 days).

I don't really like leaving the tiny calves out the back, so I walked Emergency and her daughter in toward the flats, as far as they wanted to comfortably go at a time.

The entries are listed here, where I will also post the news of the birth when it happens.