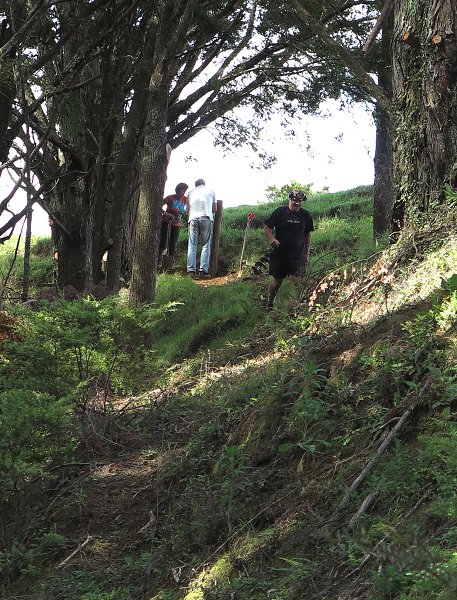 People who read this website and like it and then come to meet us, are invariably lovely.  Today we met a young man who had asked if his parents could come and stay with us for short periods to learn fencing and English - they're very new immigrants from the Czech Republic.

Magda and Ludek spent the afternoon with Stephan, digging holes for the electric fence where Stephan hurt his toe last summer, when pruning the trees in preparation for this job. 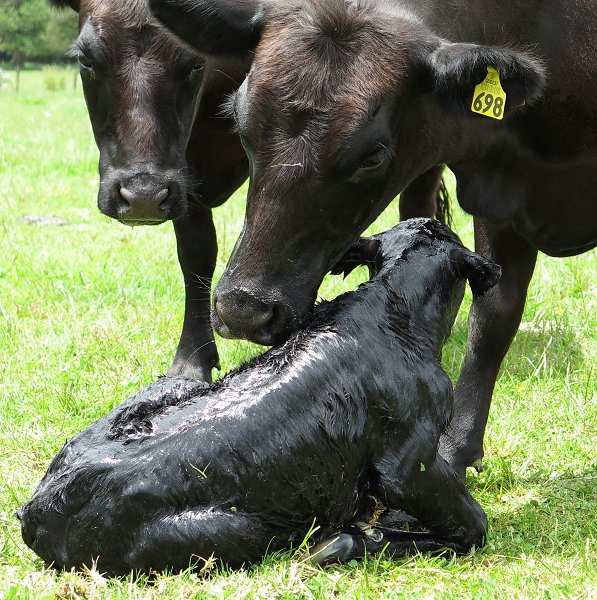 I hung around closer to home, watching for this event which occurred just after noon: Gem 698 had her calf, a fairly large bull.

I'm pleased she is successfully delivered of this baby.  It's important to me that both twins keep in step with each other in production and while this puts Gem six weeks behind her sister, she should, in the lovely condition she's attained on extra feed, catch up again and hopefully they'll get back in calf closer to each other in time, for next year.

Later in the day I removed what seemed a huge afterbirth, since Gem was struggling to eat it.

I recombined all the calved cows and heifers this evening so now there is a mob of 16 cows with 13 calves (the extras are the two cows which had dead calves and the still-pregnant Emma 93) and 15 pairs of heifers and their calves.  There was fighting, as usual, but they didn't take too long to settle. 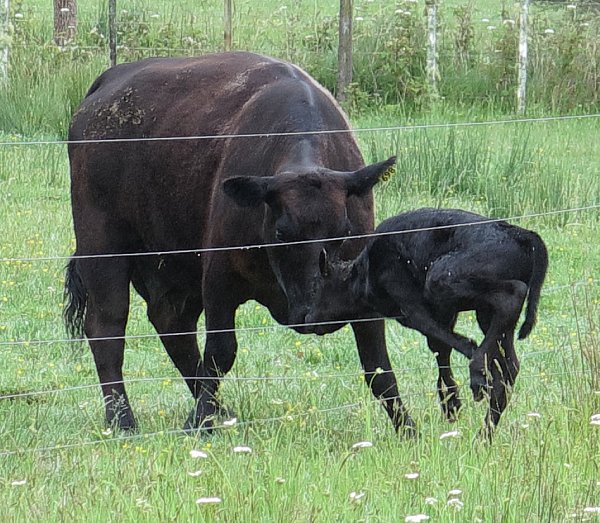 Gem's calf was across the lane and in the top of Flat 3 this morning.  Eventually he figured out how to get through one fence, but had real difficulties with the one into 5a.  They're better with three or four wires.  On a five-wire fence, the middle wire is a little too high for small calves to jump through to follow where their heads naturally go.

We made these fences five-wire to stop the sheep, which never worked, so I think we'll re-space them.

This sort of early calf confusion is why I keep the bottom wires turned off during calving.  It's bad enough being on the wrong side of a fence, without getting shocked while attempting to go back. 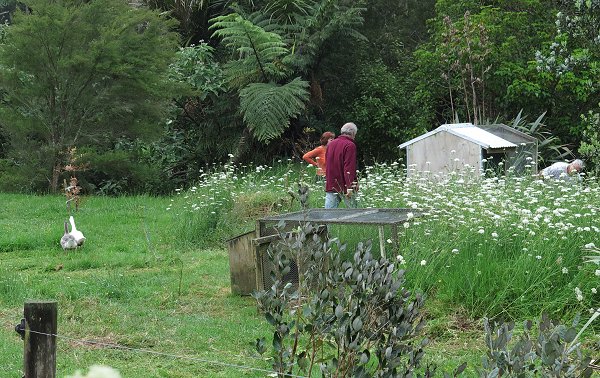 The geese are becoming quite adventurous, following our guests and Stephan down to the chicken cages this morning. 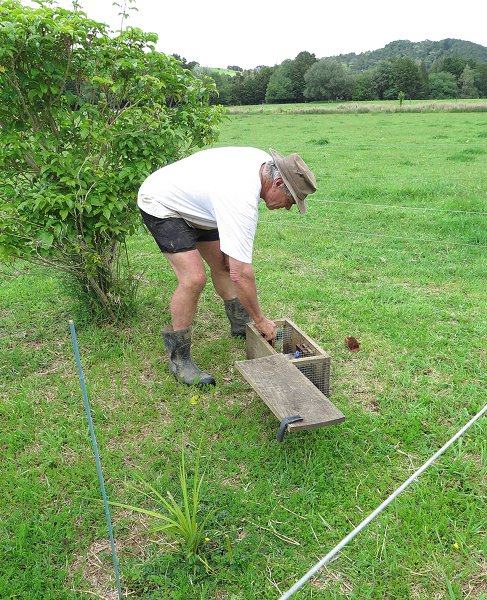 After Stephan, Magda and Ludek spent the morning tidying the garden (I now have a weed-free rose garden again, which I was once promised), we all went out for a walk in the afternoon.  Stephan took bait for the traps along the way, including this one he moved from along the track and relocated to the cat cemetery, still trying to catch that stoat.

Ludek and Magda went on their way this afternoon, back to their bit of land over near Mangonui and we'll see them again next week.

We milked Zella for the ninth time, this time keeping the milk.  We had just finished the last of our frozen stores.  We feel very pleased to have avoided having to drink any commercially-produced milk this year at all and only a little commercial butter.  I tried to record how much milk we froze, but lost count at about 80 litres.  It took a bit of work washing plastic ice-cream containers - I froze the milk in the containers, then bagged the blocks, washed the containers to freeze more.  When thawing it out, I had to put the bagged milk back into the plastic containers again, that being the most practicable option.  If I'd had an endless supply of ice-cream containers, I'd have left them in the plastic until I needed to thaw the milk.  We're always looking to re-use such things, if you're ever just throwing yours in the recycled plastic pile! 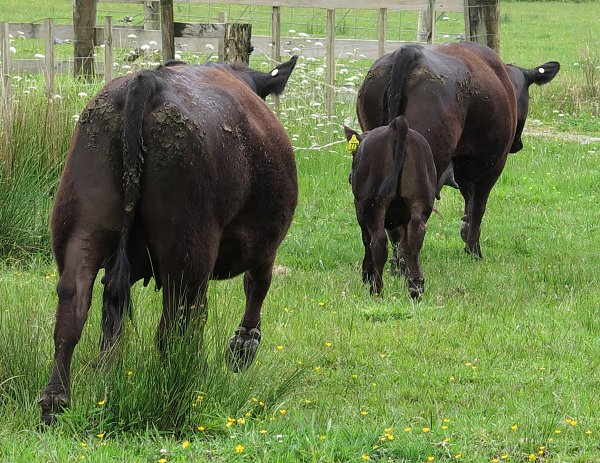 Now the twins are plus two and the new baby is ready to move, I put them in with the rest of the heifers, now seventeen pairs.

Poor little new calf got a bit distressed by all the running around as Gem and Meg sorted out their social positions in the new mob, but after a while his mother took him away into the trees at the edge of Mushroom 2 and he settled down. 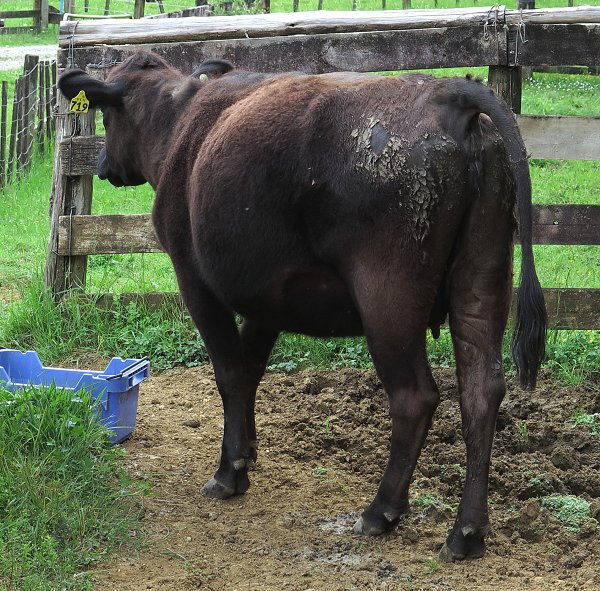 If anything could go wrong this year, it has.  I went out to shift the heifers and calves this afternoon and realised that 719 wasn't moving toward the gate with the others, standing stamping her rear feet, looking pretty dreadful.

I walked her toward the gate and into the new paddock, but she completely ignored the nice new grass and I concluded she was again ill, so called the vet, got Stephan out to help me and we managed to get her calf to join her in coming out of the paddock and down the lanes to the yards.

She's now back on antibiotics and pain relief and we'll see how she gets on.  The presumption is a uterine infection still grumbling along since calving and not completely quashed by the previous rounds of medication.

I spent some of the morning with one of my website clients, who wanted to learn how to do a number of things to his website himself, instead of paying me to do it.

The web hosting venture provides a cheap option for those who buy my hosting space.  If you want a website or email on a domain name you own, I might be able to help you. 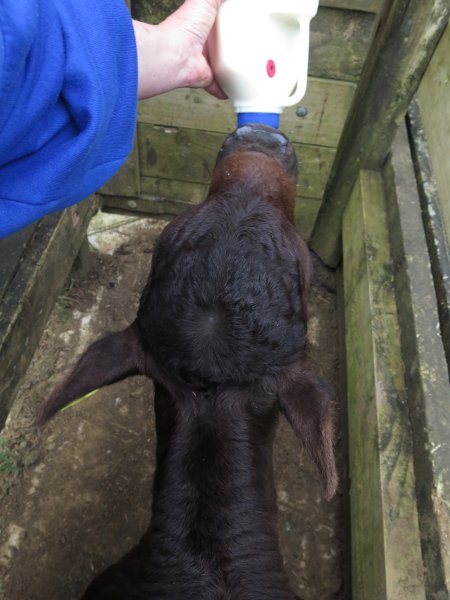 719 is sick enough not to be producing milk, so we're feeding her calf.  He's nearly six weeks old, so getting him to accept the bottle took a bit of a struggle, but it's easy enough up the race with a bar behind him.  Once the teat is in his mouth, he realises that sucking is quite a good idea.  He's a really slow feeder though, so it takes a while. 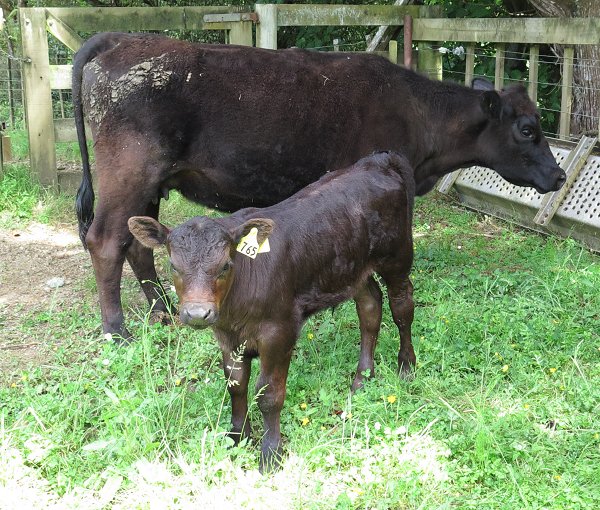 I was on the point of shooting 719 today, but after a chat with the vet, decided to give her the second shot of antibiotic I had for her and see what happens.  She's so sick I was able to inject her where she lay by the yards.

I'm very unhappy about her and I have a nasty feeling I'll look back later and know that I would have been right to act today.

719 nibbled some grass and drank a little today.  I felt quite hopeful.  She moved around a bit more than yesterday and generally appeared less unhappy. 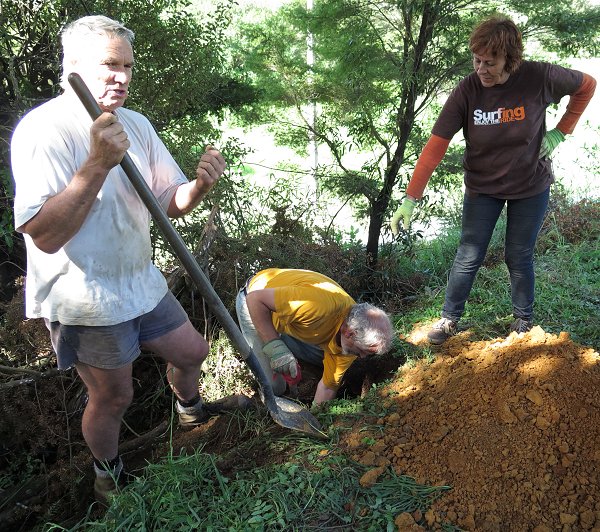 Ludek, Magda and Stephan stripped the old fence along the road-side at the base of the hill where we regained some of our farm in the summer of 2009/10.  Then they started putting in the angle posts for the new fence.  Most of the work needed to be done by hand because the hillside was too steep to get the tractor along there easily and most of the posts had to go in through the tree roots.

Stephan was presumably expounding on the value of good hard work ... especially when you can get someone else to do it. 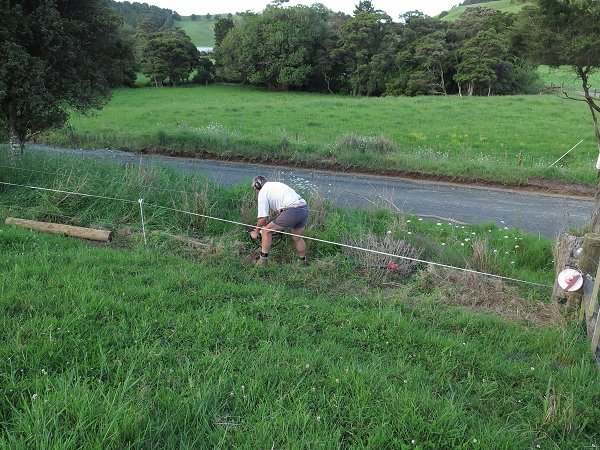 Stephan carried on alone into the evening, after the others had left.  We put a hot tape up along the fenceline overnight, to deter any wandering stock.