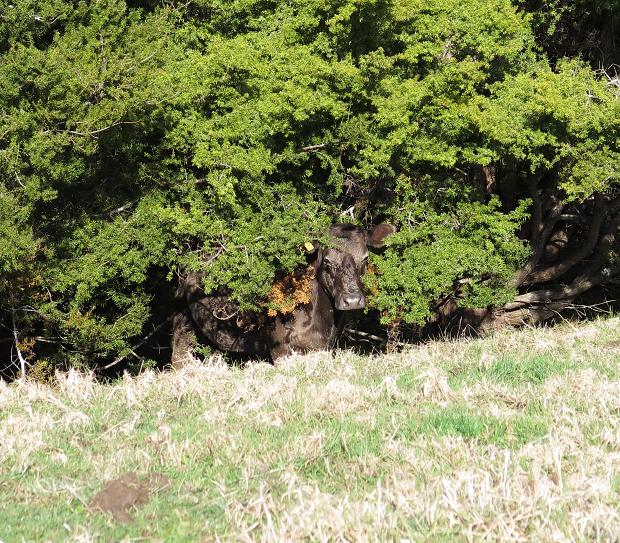 I was checking the cows over the road and at this stage, still nursing a sore left thigh, where young 728 had booted me when I was scratching her back!  I told her that was black mark number two and that one more and she'd be off.  (Number one was not staying pregnant last year for what should have been her first calving.) 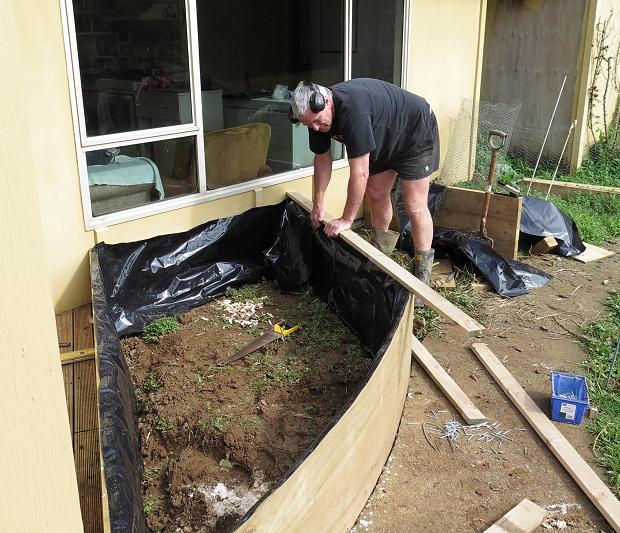 Stephan continued his garden-building project.  He left the bottom open to the depths of the earth - after removing all the Kikuyu he could - and lined the sides with heavy plastic because he'd used treated timber and we don't want that leaching into the soil and our vegetables.  Then he went back to town for a ute-load of scoria for the base of the beds, to facilitate good drainage, before filling with "garden mix", also bought in bulk.

I spent some hours stealing quite a bit of both for planting things in large pots, which would otherwise have used up a lot of much more expensive potting mix. 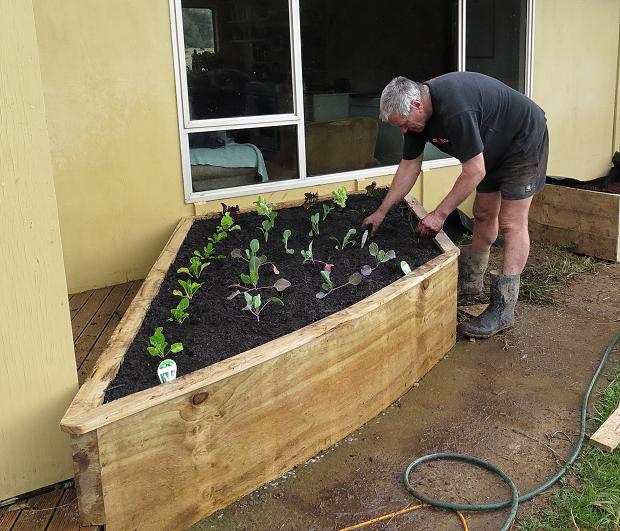 All finished and planted with seedlings purchased for the purpose - and a few from Jane as well. 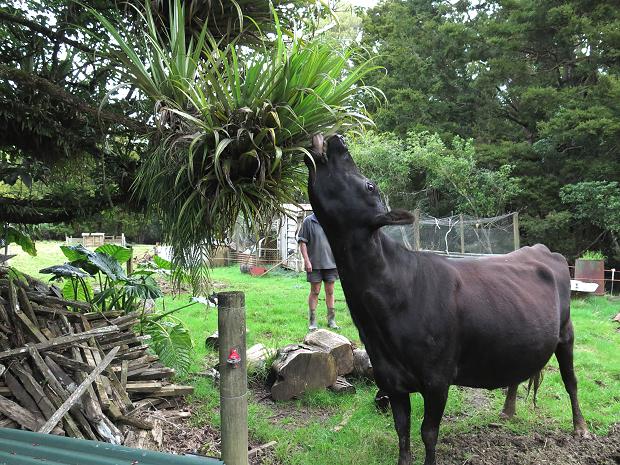 Just over a week ago we put Zella and Imagen up in the area the sheep usually graze and I should really have moved them yesterday, but we forgot.  Because this is the general rubbish collection area (our hidden shame), we both escorted the cows through, waiting while Zella had a snack from a lovely juicy epiphyte on one of the Puriri trees.  These leaves crunch like they're full of watery sugar and the cows like them very much.

This afternoon we returned a visit to a couple of our dinner guests last Thursday evening.  Sandra and Eric make wine and have a covenanted bush block which they've created on a previously weedy hillside.  Stephan has been there before, as part of the annual fund-raising Garden Safari.  I'm always thinking about interesting things I might write about in my "Down on the Farm" column in New Zealand Lifestyle Block Magazine and while I don't find interviewing people particularly comfortable, enjoyed finding out more about Eric and Sandra's enterprise.

We spent a very pleasant afternoon with them, which then drifted into the evening over bowls of lovely soup. 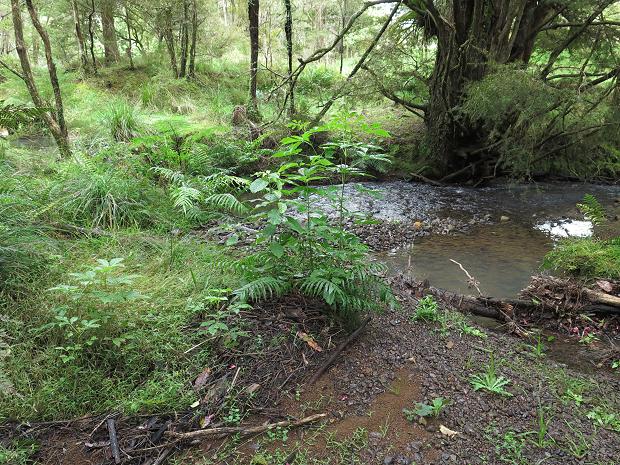 Between showers (sort of) I moved some cattle, including the older heifers into the Bush Flat paddock and on my way home, went for a wander into part of the extended reserve area along the stream.

The stream used to run through where I'm standing, but has in the last couple of years carved a shortcut through from the top left of the picture and now only a very little trickle runs where the water used to flow.  These Puriri seedlings have grown in the river gravel.  There is still water coming from behind me in the picture, mostly from the Bush Hill block, so it will never be entirely dry, but as plants grow, the area will fill in more and more.

It's very interesting watching these sorts of changes over time. 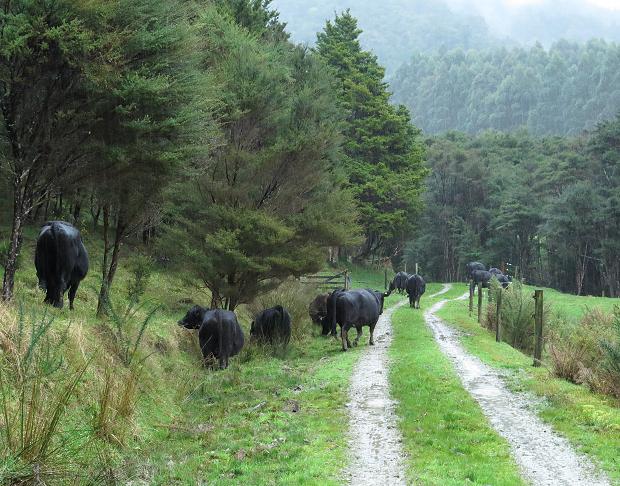 Walking with an umbrella again in the rain, I followed the heifers from the Bush Flat to the Spring Paddock on the other side of the farm.

We'll need to do something about this drain, to stop the cattle walking in it.  Some of the fences are not in the best places.  The fence on the left, at the bottom of the PW, is one we replaced several years ago and I think we hadn't then started to think about realignment, just put the new fence where the old one had been.  But it should really run closer to the bank, so there isn't so much area between the track and the PW and we could run one wire along the side of the track, to stop the cows walking in the drain.

At last a spring-like day, not cold, with a steady dry breeze, so I opened windows and doors and did lots of washing which had piled up during the wet weather.

In the early afternoon my long-time friend, Jorja and her partner, Imelda, arrived from Auckland.  This is an early 50th birthday visit, since they won't be able to come on the day. 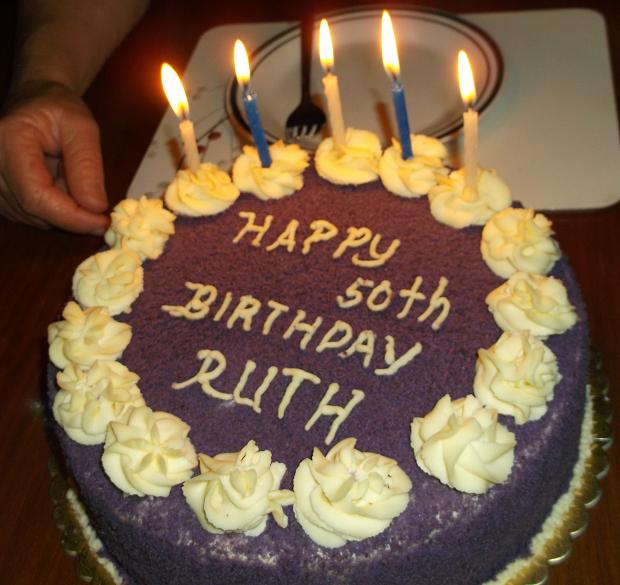 Imelda made me a PURPLE cake!  This was a proper sort of purple, all the way through, made from the Filipino purple yam and iced with a mixture of cream cheese and cream.  The purple outside was crumbed cake stuck to the icing.  It was stunning and delicious and sadly I didn't give someone my better camera to take some pictures! 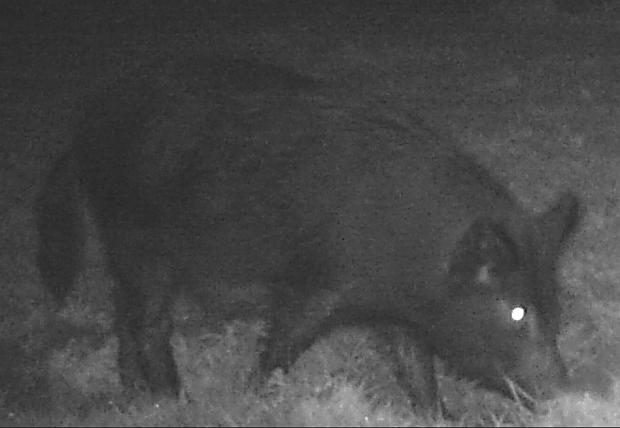 While we were enjoying ourselves, the pigs were too.

They're not showing up on the camera at regular times and not even every night, so we've still not gone out to shoot them.  But the same two pigs, this big black one and its smaller, spotty ginger companion, keep returning. 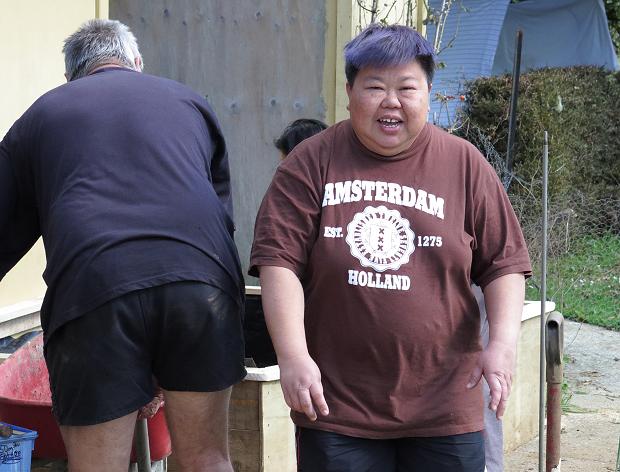 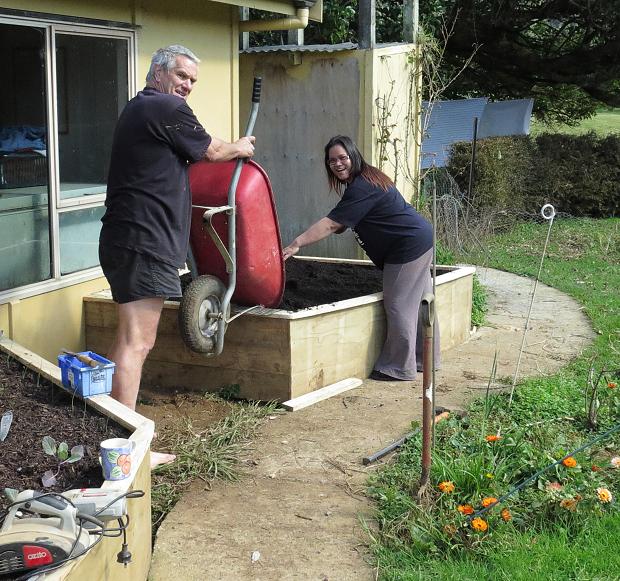 Stephan had picked up some more garden mix yesterday when in town, so was today able to finish the second raised garden bed.

Imelda was keen to help, so he got it done in half the time.

Meanwhile I took on the risky task of pruning the huge Elena rose, a fiercely thorny bush which produces beautiful light-lemon blooms.  It's a robust plant, just the sort to grow easily.  Every year I cut it right back and it vigorously grows up again and should flower beautifully in about six weeks.  The most important thing, which I've not always been very good about, is to chop the prunings into short lengths and put them in a suitable container, rather than leaving them on the ground for unsuspecting, uncovered feet to discover later. 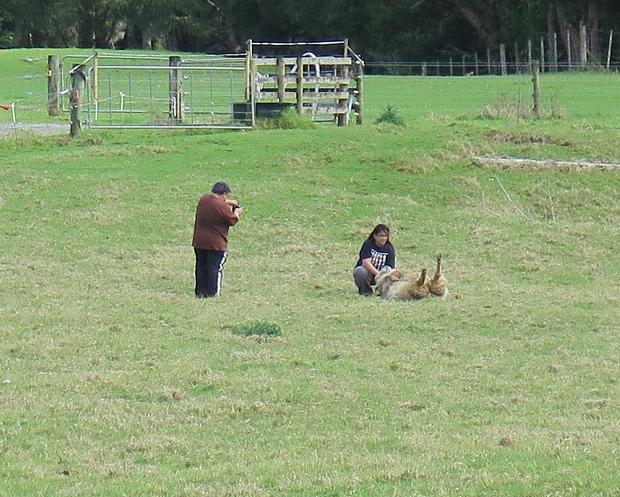 These two should never be hired as emergency workers!  They took rather a lot of photos before eventually restoring this ewe to her feet. 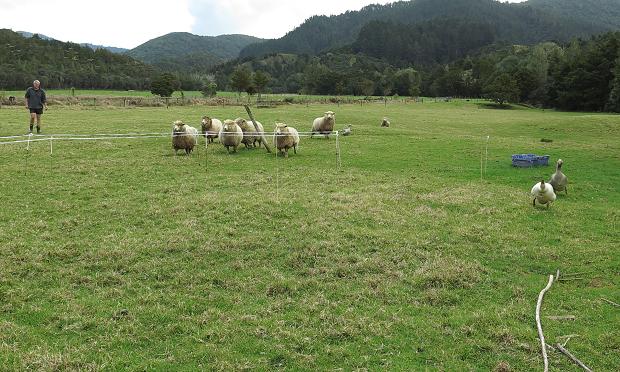 After Imelda and Jorja had left, we got the sheep in and put them in the shed - they've finally dried out with these two lovely days of fine, dry weather and they desperately need shearing.

Mr Goose, rushing toward me on the right, is becoming a real pain.  Later it occurred to me that this behaviour is probably related to spring and nesting season. 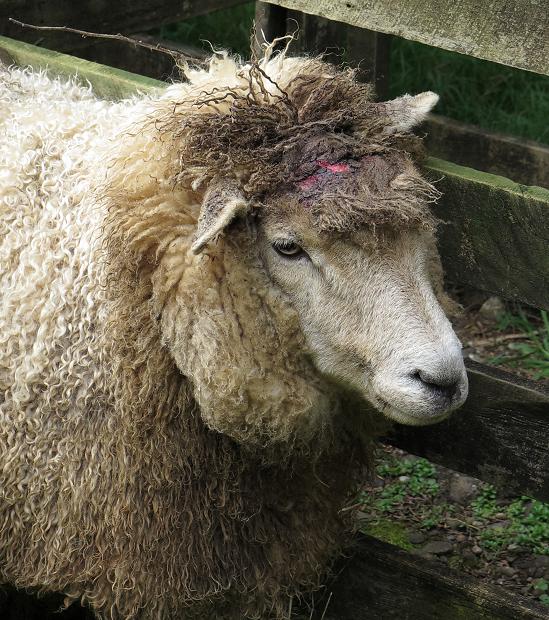 Oh, that's why her head has been dirty for the last few days: she's been rubbing it on the ground repeatedly, presumably because they all have far too many lice under their too-long wool. 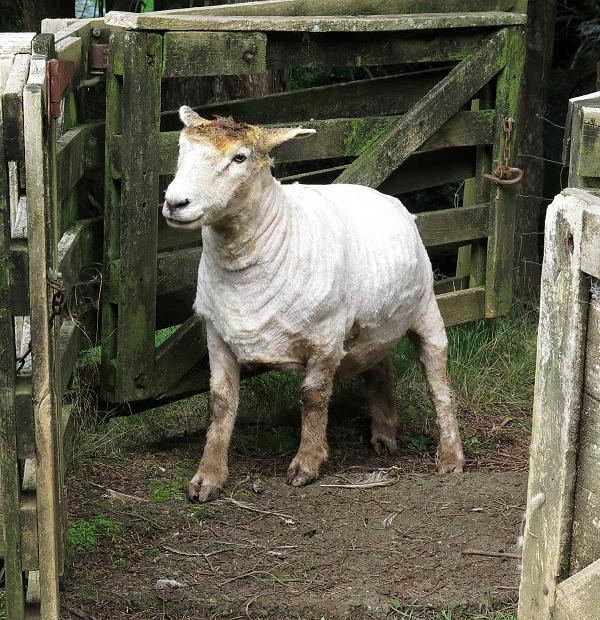 Being shorn must be such a huge relief.  After Stephan had shorn her (she's Tag Ewe without the tag now), I sprayed her head with iodine to hopefully avert any problems with those open skin areas.  She spent ages then scratching her sides against the gates and rails, while the others were being shorn.

The wool is hardly worth anything these days, so shearing is a welfare-management tool and sometimes it's really hard to get the timing right, mostly because of the weather.  It's also one of those "do it tomorrow" jobs which got put off during the summer because of the fencing.  That then shifted the pre-winter shear back because the sheep were still then in quite short wool.  This is another job which needs firmly placing in the annual planning calendar. 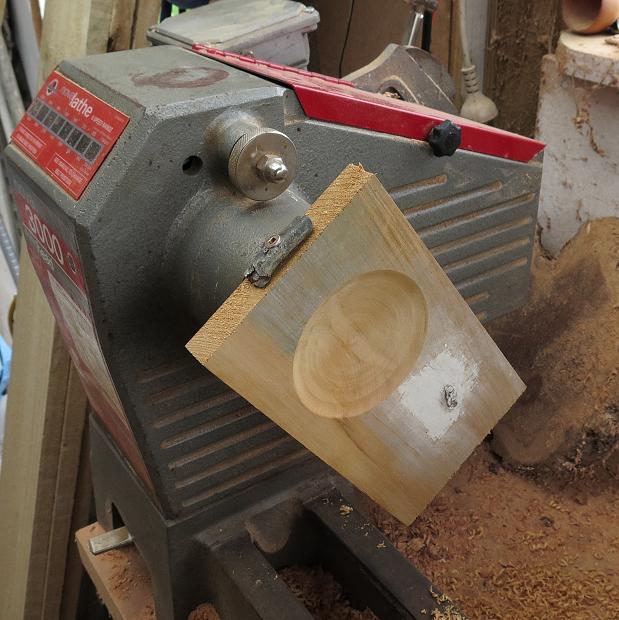 There seem to be some budgie issues, evidenced by the repeated appearance of eggs on the aviary floor and one bird has been bitten on her cere.  I presume there's competition for a particular nesting box, so I asked Stephan to make me some more.

He was delighted when he figured out an easy way of balancing the insert for the base of each box, which needs to have a little depression made to keep the eggs together - apparently they don't use nesting material, just a little dip.  By screwing a lead wheel-balancing weight on the end of the block, he could spin it on the lathe to carve out the depression. 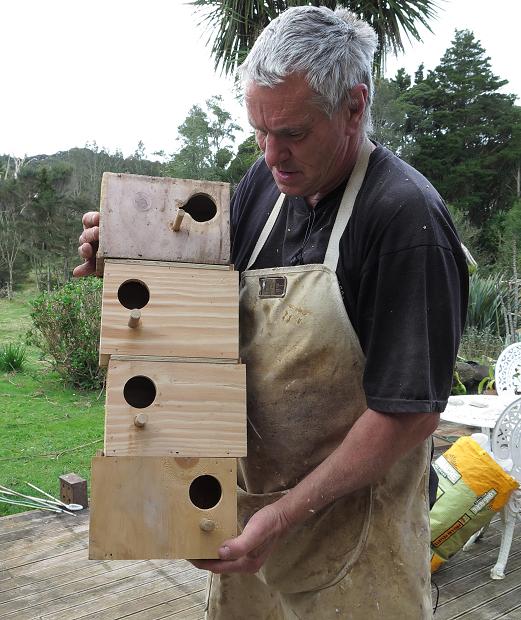 I now have nine nesting boxes for sixteen birds.

Yesterday and today I spent some time observing the birds closely, trying to figure out the rest of the pairings.  Some have been obvious for a while, particularly Loofah and her partner, now the parents of four eggs upon which Loofah is sitting.

Others took a little watching and note-making to determine and eventually I've worked out that there are seven females and nine males.