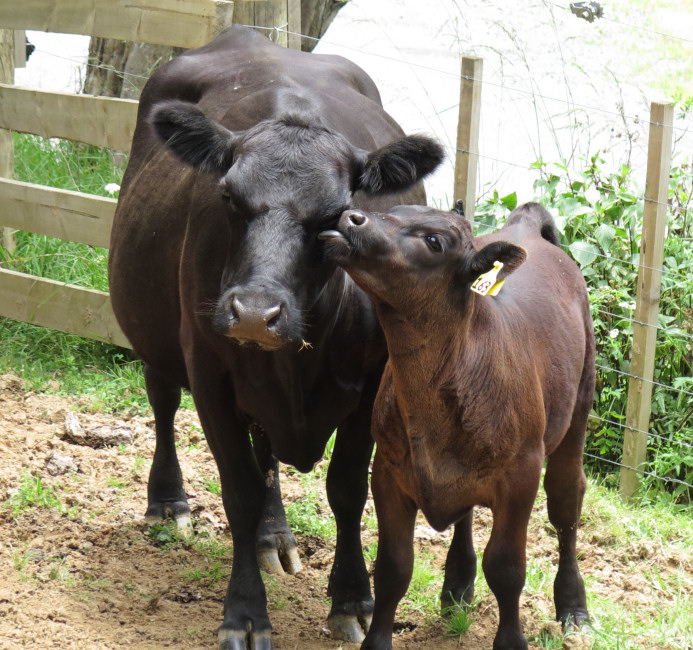 Dexie 101 and her son, waiting as we made sure everyone was present before moving the cows and calves across the road. 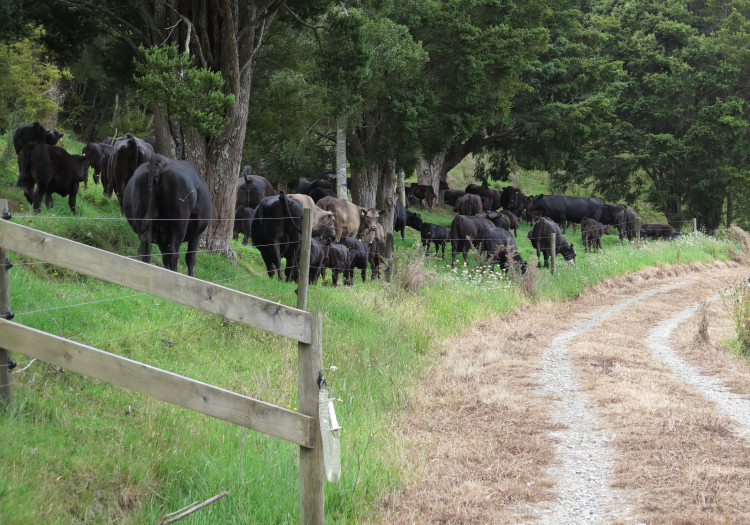 There are 74 in the mob, so I'm shifting them around quite quickly to ensure they always have enough to eat.  Here they are at the bottom of the PW. 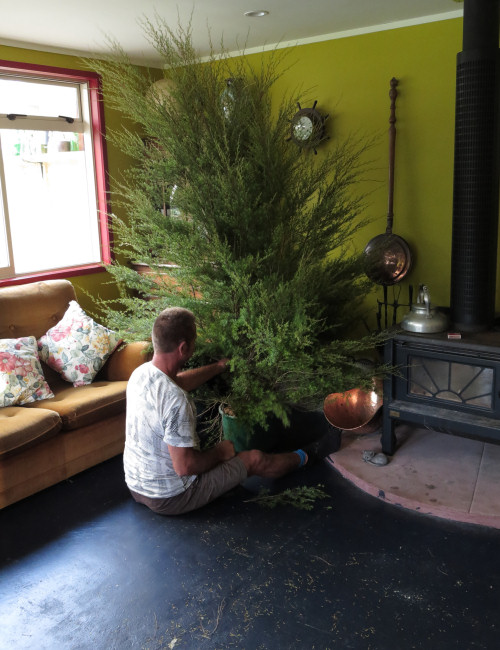 Jasper and Stephan went out together to find a Christmas tree and then Roger arranged it in a bucket full of rocks, to hold it steadily upright.

It was then festooned with tinsel, shiny coloured balls and tiny electric lights by the children and I. 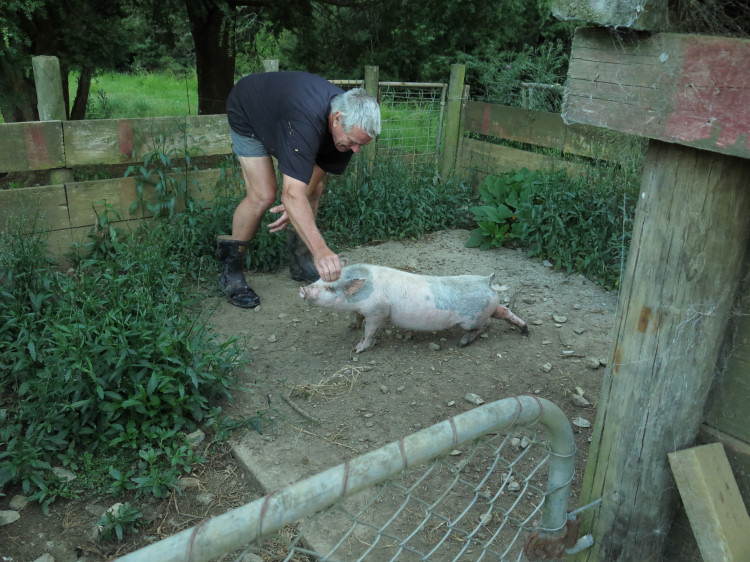 Little pig, who likes a scratch. 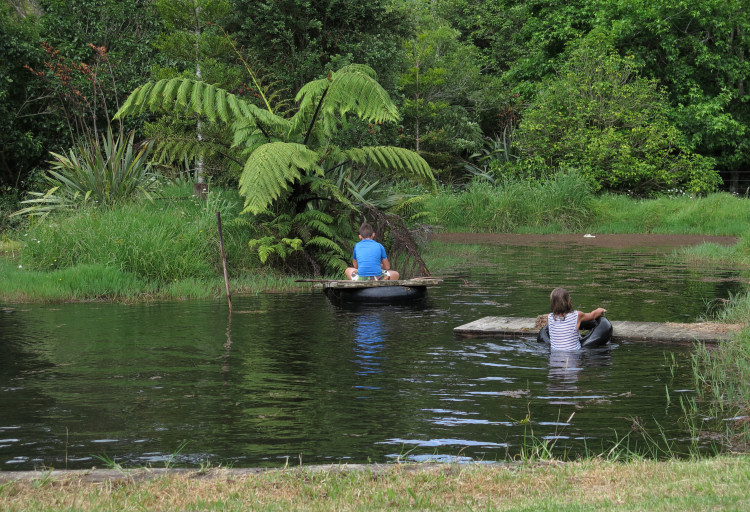 Stephan was in the kitchen preparing ham and steamed puddings for our dinner later in the day.

The boys spent a lot of their time in the pond.

Jude and Stella came out with me to move the cows and calves around into the Pines paddock.

There were driving lessons and practice for Stella throughout it all. 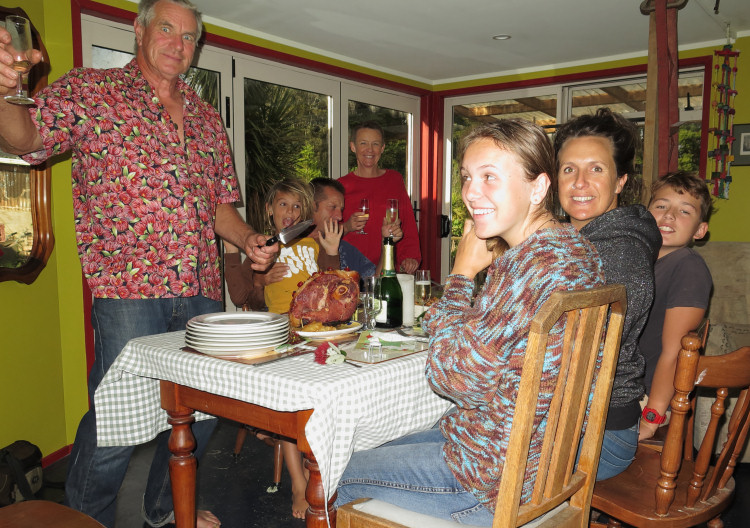 Christmas dinner was a fine feast but as is often the case at Christmas time, these were the happiest faces on the day, for there were also too many tears.  There are a few emotionally-exhausted people in this recently well-travelled family! 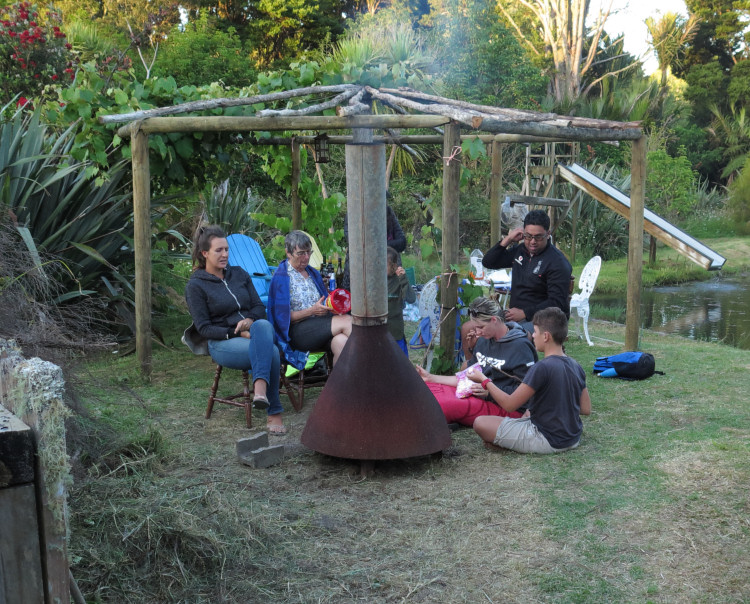 The quiet end of Boxing Day, as those who hadn't yet gone home or away for a rest, or off to the kitchen to fetch more supplies, sat around a fire and roasted marshmallows. 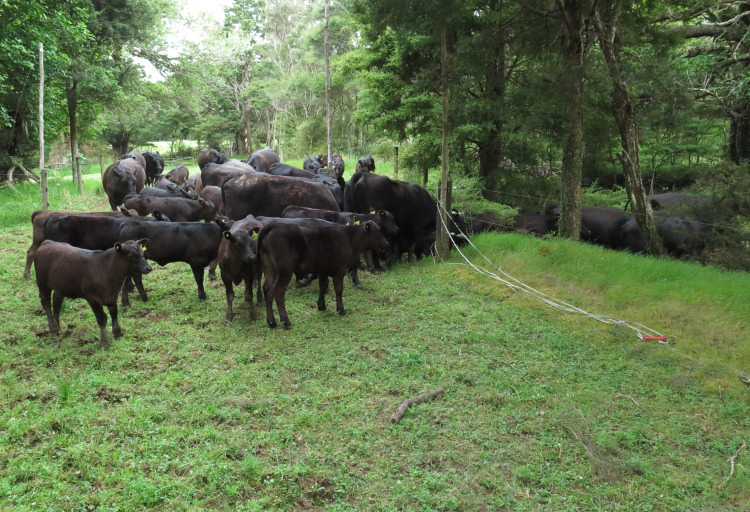 Jude and the kids left late morning, going off to their annual camping spot in Whananaki.

We went out to move the cattle, now in the Swamp East, across the stream into the Blackberry Paddock, via the difficult gateway.  We almost managed it... 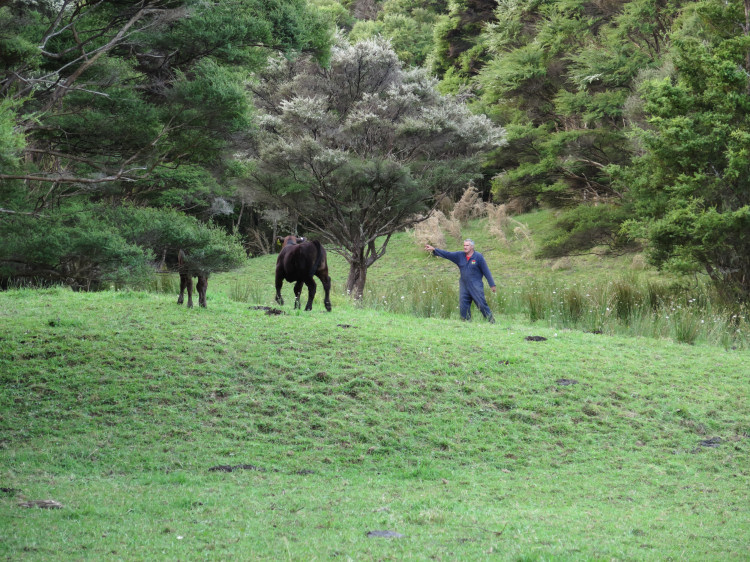 ... except for these two, who got sworn at quite a lot and then left where they were, in the hope they'd eventually figure out how to get across to their mothers without being silly about us being there.

Both are the sort of calves who will run any which way we don't want them to so they can watch us, rather than watching the rest of the cattle and following them.  This sort of behaviour earns a negative mark on your mother's record. 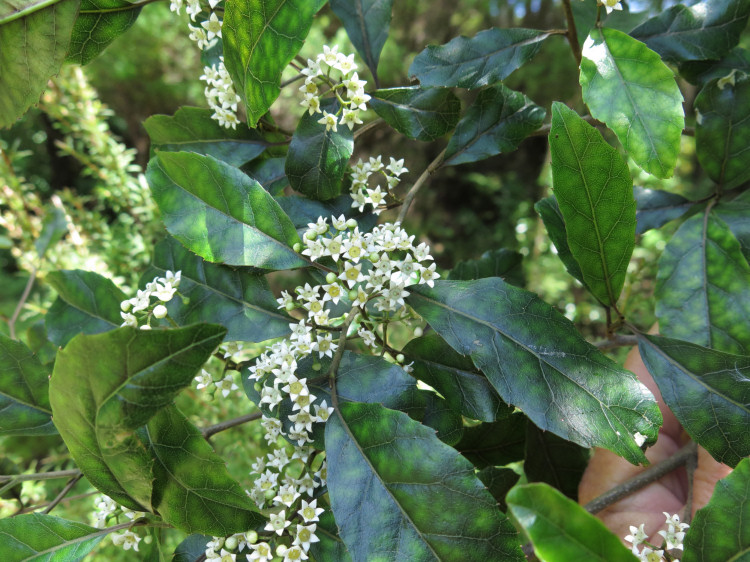 I've been watching this tree for several years in the riparian reserve opposite the Swamp paddock.  It is growing into a very beautiful specimen.  I think this is the first time it has flowered. 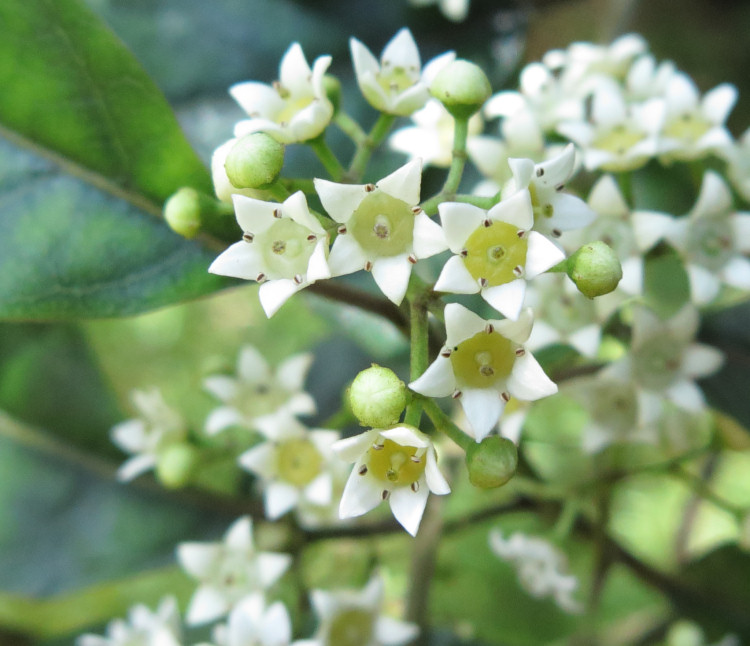 The flowers are very simple, pretty.

I had walked out to move the big mob of cattle, while Stephan went over to Pukepoto to collect the semen bank, ready for mating to begin tomorrow. 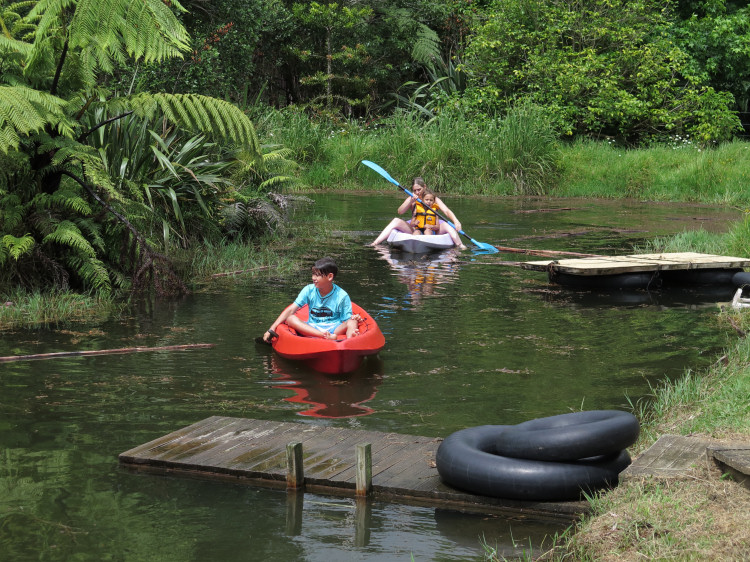 Sarah and the boys on the pond this afternoon.

It's fun living by an attractive holiday destination! 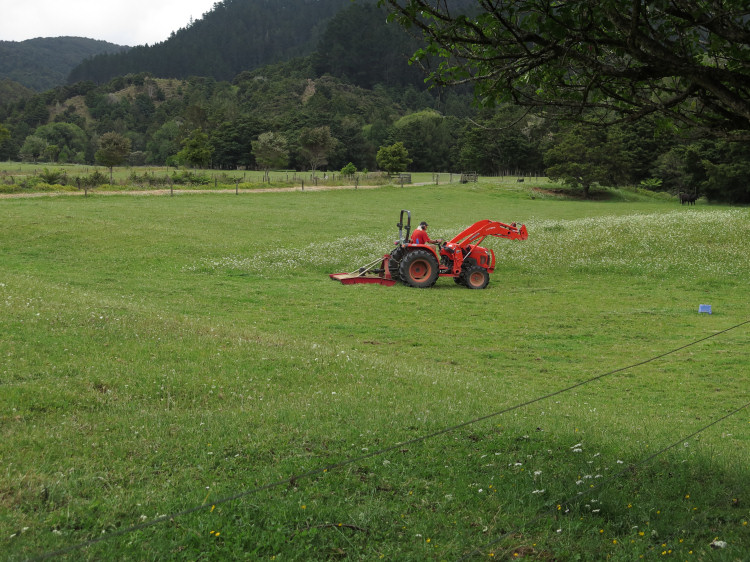 Stephan made the House paddock look beautiful by mowing down all the stiff and unpalatable Parsley Dropwort flowers later in the afternoon. 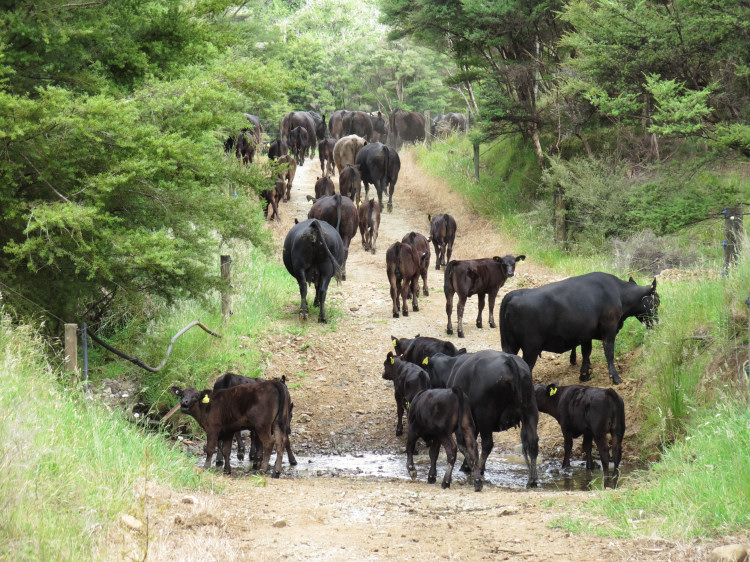 In the early evening I brought the big mob in from out the back, to the yards, where I drafted them into their mating groups after sticking heat indicators to their backs (see below).

I finished putting the last of them in their paddocks in the dark, then I opened the Small Hill gate for the young cattle to come along the lanes to the driveway near the house, to graze overnight.

After a cup of tea and a sit-down, I went back out for my first late-night check, finding young 773 on heat in the driveway.  Then I waited until nearly midnight to do a second check, to make sure.

Up at 6.30 to check the cows and 773 was no longer standing, so we put them into the yards.  Stephan had forgotten how we do this and put the backing rail in at the wrong level and 773 stepped back over it and the inseminator fell out of the cow and knocked against a rail and all was chaos for a few seconds.  I hoped I'd managed to ensure the end was clean again before a second attempt - it wasn't until afterwards that it occurred to me that I might not have seen any contamination without glasses on.  The semen is sensitive to thermal shock of that kind; being nice and warm inside the body of the cow, then out in the cool air again.  Since I'm writing this far in the future, we know it all worked out just fine anyway and the insemination resulted in the conception of a very nice bull calf.

As I was following the youngsters up into the top yard pen, I came into close proximity with Gina 142, a heifer I had rejected for yearling mating last year because of her unsatisfactorily nervous behaviour.  Now she appeared to be a much more mellow creature.  Early this morning she was on heat and I decided I'd give her a go: if I could inseminate her, she can stay.

At 2pm we put Gina into the headbail part of the race, so she'd be discouraged from trying anything silly like jumping over the top of the rails and she behaved acceptably well, albeit a bit jumpy; but the insemination was quick and easy and I felt very happy with it.  She's a really nice-looking heifer. 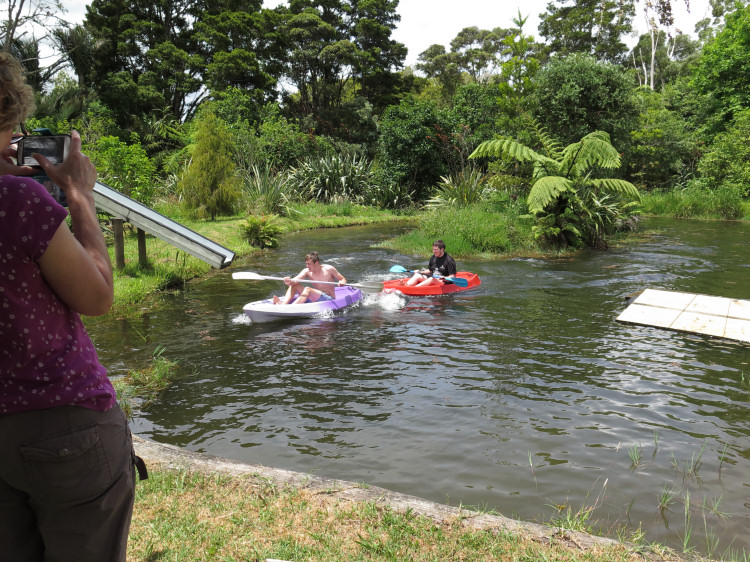 Chantelle and Mike and two of their sons had come to visit over the middle part of the day which, of course, involved some pond time.  William had left the kayaks here, so they were put to good use by Eric and Stuart, for races around the island. 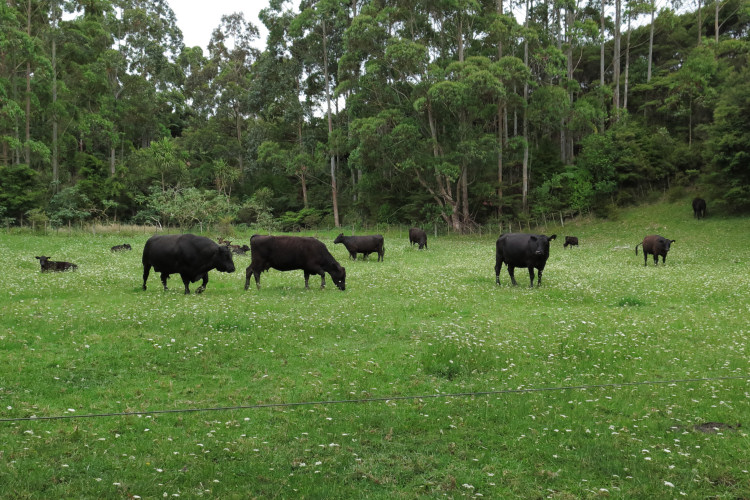 After a couple of hours' sleep I went out to check all the cows, finding Mr 87 shadowing 703, who must have been coming on heat. 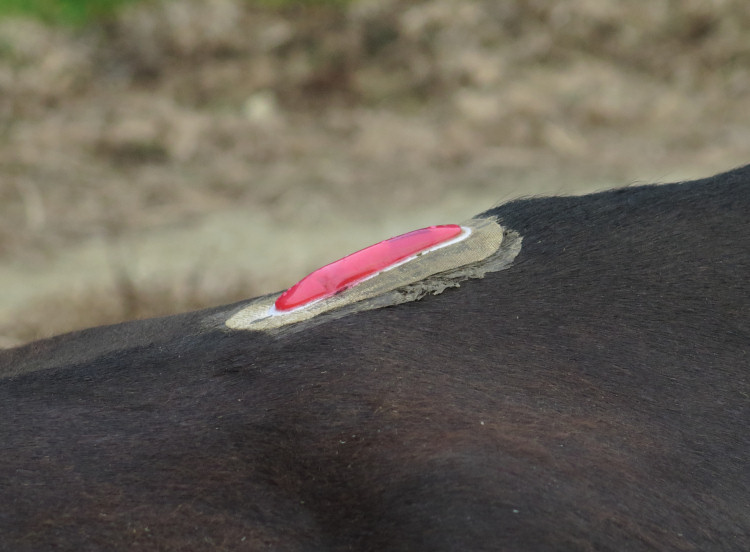 In the insemination mob, Dexie 121 had obviously been having a busy time since I saw them four hours ago.  A red indicator with dirty material around it means a cow has been mounted by others many times, so there's no doubt she's been firmly in standing heat.  She wouldn't let anyone mount her now though, so just before dark, when I moved the whole mob, I drafted Dexie and a couple of companions out to take them to the yards for her insemination.

During my last check for the night, I heard Kiwi calling in two different places up the valley. 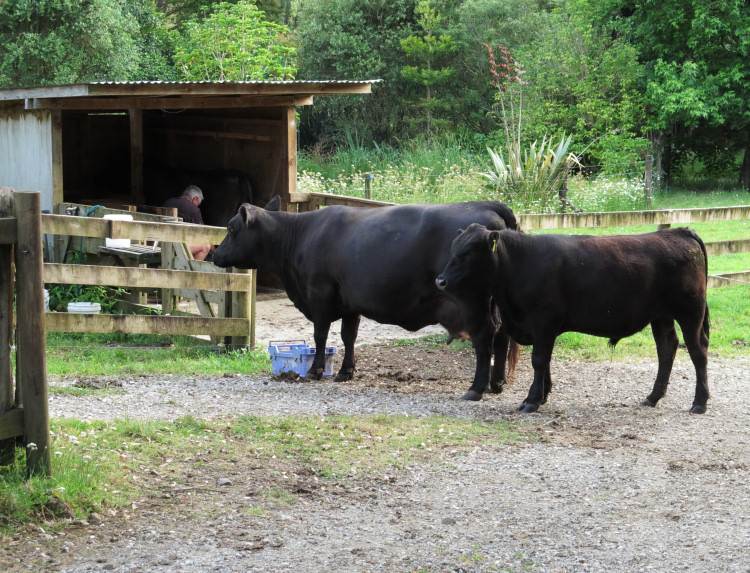 I am keeping the spare yearling bull with Zella and Imagen, having learnt a lesson from a previous year when I wrongly presumed Zella pregnant when she wasn't yet.  He was hanging around closely with Imagen this morning; she must be coming on. 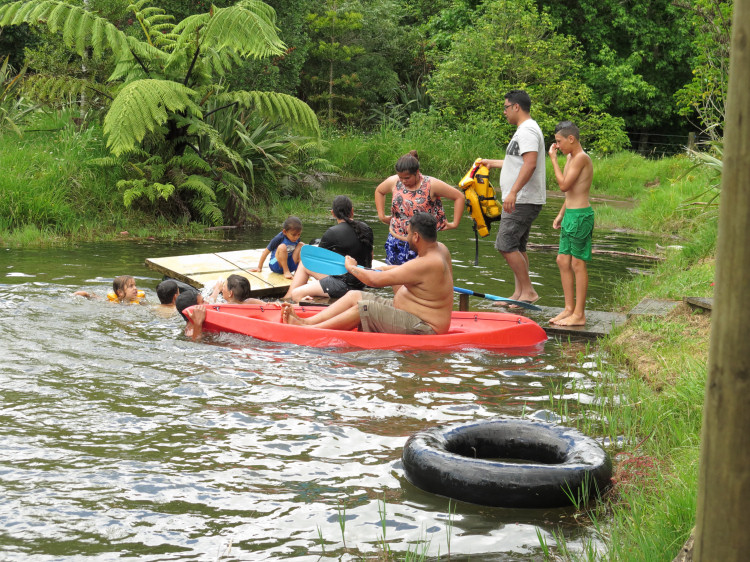 A large group of people were in the pond when I arrived back from one of my cow checks, several of Karl's cousins and their families. 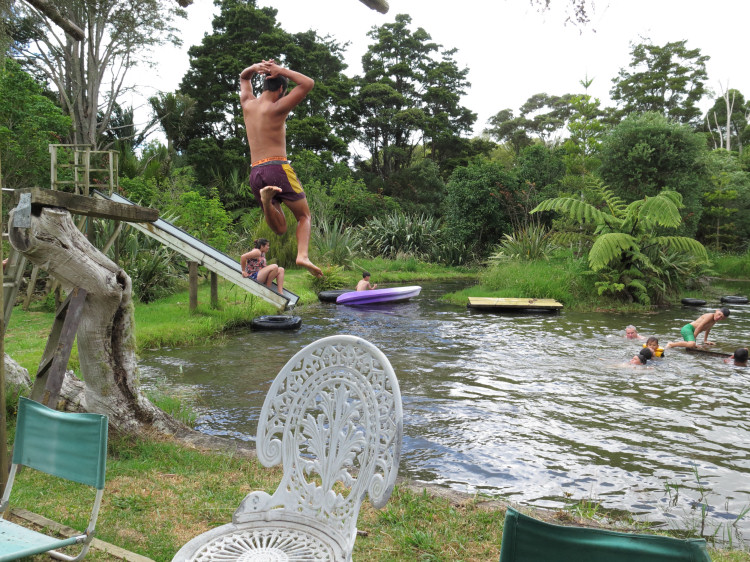 There was some very stylish and entertaining pond entry, resulting in ... 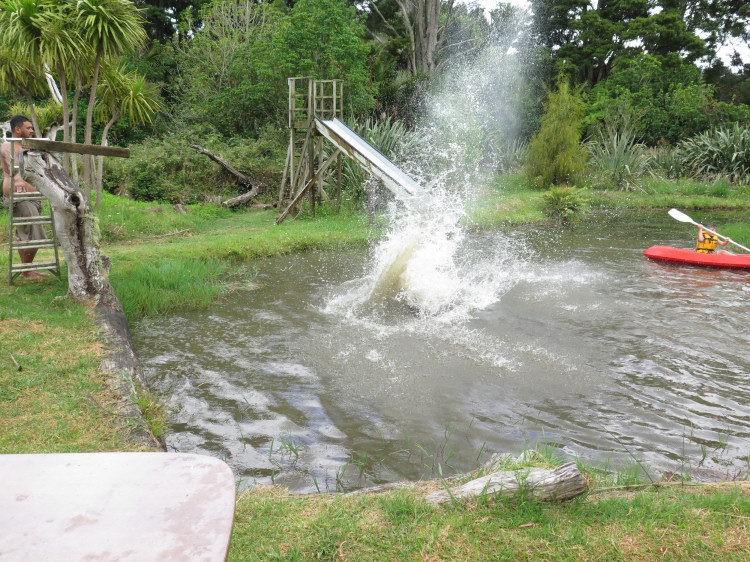 ... some impressively high plumes of fine spray!  This was the Mangere Bridge Bomb, oft-practised by the look of it.

Everyone had a great time.