The second half of the week
beginning the 14th of October 2017.
Wednesday the 18th 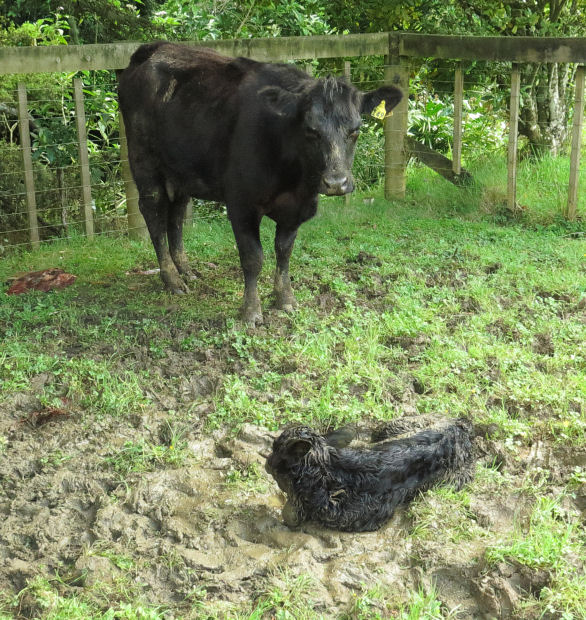 In the dark neither of us had noticed that Stephan had dragged the calf out in to a low, wet spot.  At 8.30am the calf was quite cold and still wet and muddy.  Stephan helped her to get up on her feet (she must have been trying a bit on her own earlier) and moved her across to a drier, firmer bit of ground. 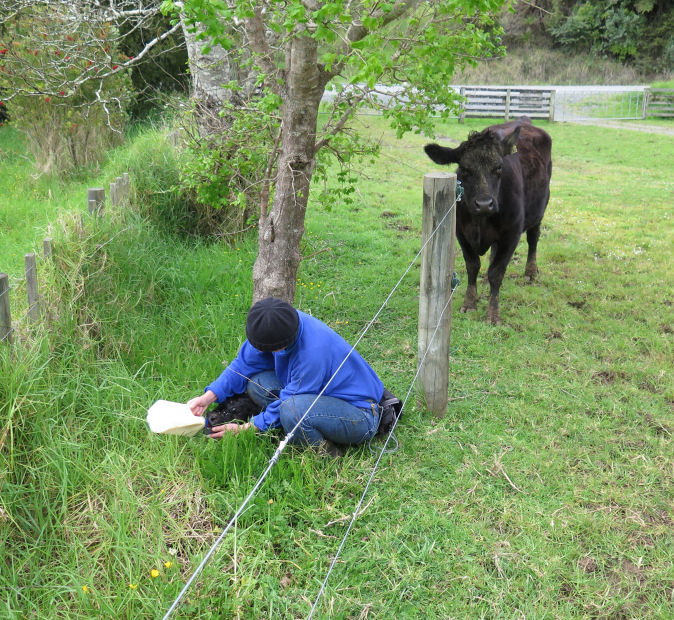 An hour and a half later the calf had moved and settled down in some long grass, although it was obvious from her mother's udder that she'd not managed to have a feed.  When a calf is cold and a bit weak for any reason, I find it easiest to get it started with some warm colostrum saved from Zella's first milkings.  It would be quite stressful for us all to restrain her mother again and try to get the calf feeding from her.

Once a calf has had a bit of colostrum, it'll either immediately get up looking for more, or will do so after digesting it and feeling a bit more energised again. 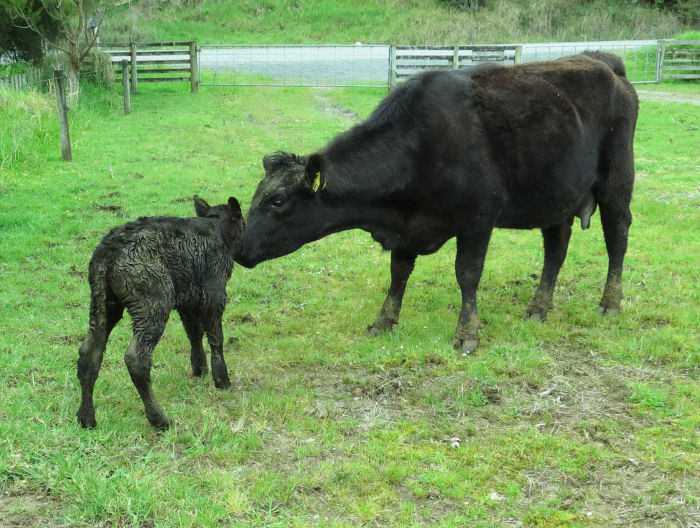 After her feed, Stephan got the calf up so she could go back to her anxious mother, but she soon settled down in the long grass again.

We went off to town for some physiotherapy for me and Stephan went to the medical centre and ended up going up to the hospital for an x-ray to check his finger.  Nobody told him what they think he's done, so it's lucky we've already dealt with a similar injury before and know what to do.  The extensor tendon in one of his fingers has been damaged, so the fingertip droops.  I sustained a similar injury several years ago when pushing my socks off one night and had to wear a splint for several weeks until it healed.  We started splinting with wooden tongue depressors from the medical clinic but will purchase a suitably-sized plastic splint as soon as we can.  No wonder people wander around with bent fingers: the medical system appears to have a gap in this area.  Why don't they fix "mallet finger" injuries?  It's very simple to do. 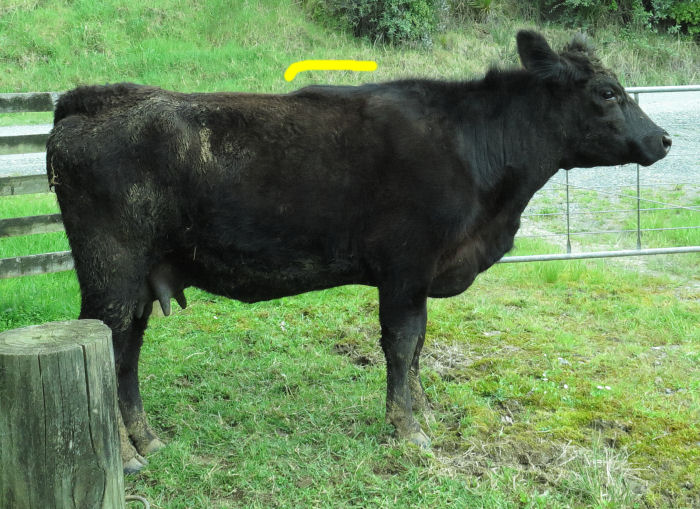 Queenly 149's calf still hadn't managed to feed by the end of the day so I took her another bottle of colostrum.  At least we know she's had what she needs until they sort things out between them.  I watched the calf enthusiastically trying to get a feed from her mother but Queenly was turning and kicking and so nervous overall that she wouldn't let her.

Her back has a very obvious lump where she must have hurt it during her struggles to get up last night when cast.  She must be feeling quite battered.

At 9pm Emergency was had two feet and a nose already presenting and I watched her have a tiny heifer.  Lovely. 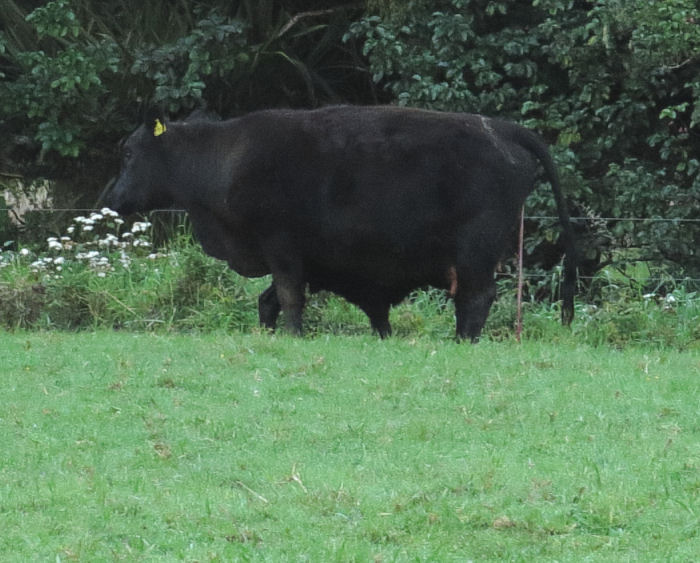 Out at 2am to check Imogen 155, who'd been looking a bit distracted earlier but there was no firm sign of labour.

At 6.50 this morning there she was, standing with a calf!

I am relieved.  I had begun to fear we'd have to help all the heifers.  But also relieved because Imogen has become rather special and I dare not invest too much hope in what might be ... don't count your chickens and all that. 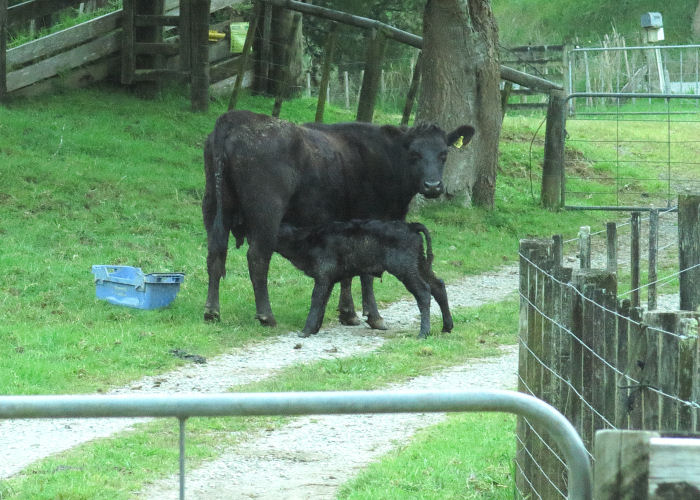 And there was 149, quietly feeding her calf.  She had calmed down a great deal since last night, thankfully. 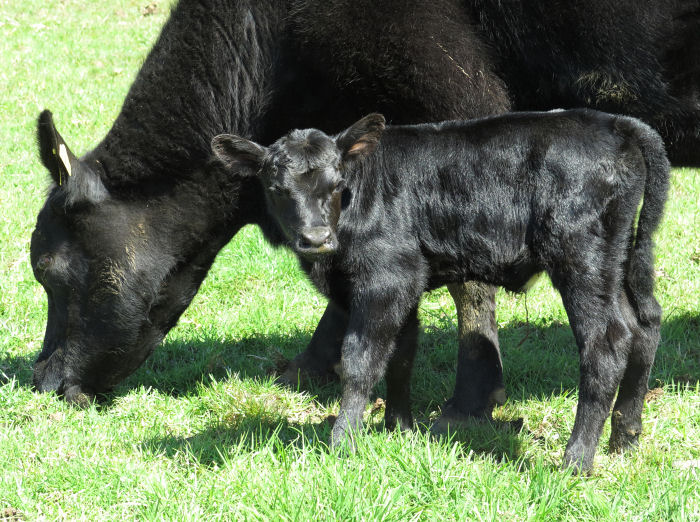 Emergency and her calf, sired by Summitcrest Focus 2U66.  She's a tiny thing and has a similar pattern of white marking on her belly as Dexie 121's daughter by the same bull. 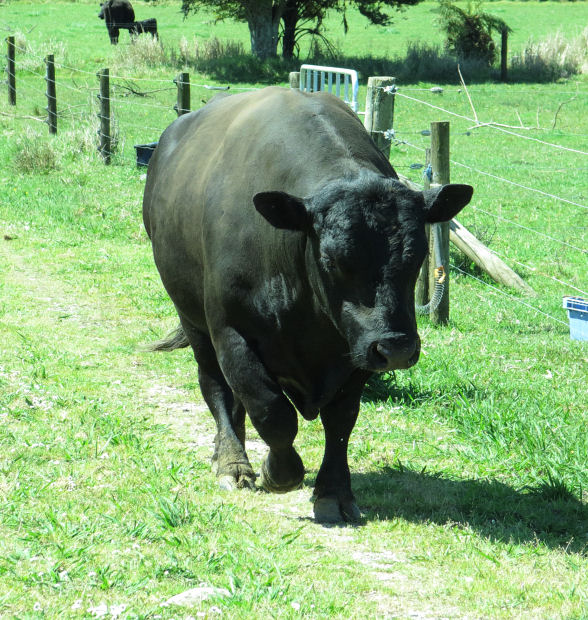 Mr 87 walks entirely normally again now, all traces of his earlier extreme lameness having disappeared.  Presumably I was right about his feet simply being tenderly soft after being wet for so many weeks. 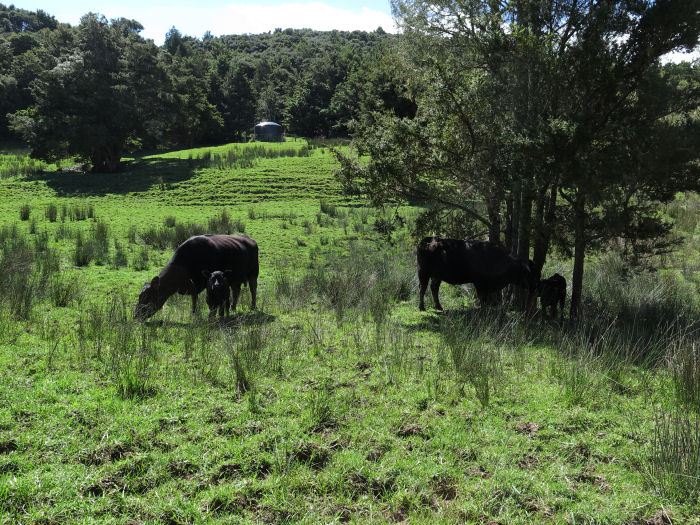 Yesterday Stephan came to check on the cows and calves in the Tank paddock for me.  When I came back from doing other checks he had a silly grin on his face and was looking pointedly at our aluminium ladder: our lost ladder.

Several years ago we had a visitor who had a brand new video camera.  He was very excited about it, went around making movies of everything he saw.  On the following morning he came out of his room in consternation, insisting that someone had come into our house and taken his camera, because it was nowhere to be found.  This we knew to be impossible, since everything else was where it should be, but he was insistent ... until he discovered it where he'd left it sitting all night, on top of his car.
"Someone's been in and taken it" has become a bit of a joke here, whenever we can't find something and the ladder has been one of those things for the last several weeks - except we began to wonder if someone really had, since we couldn't find it anywhere.  Stephan had been throwing a rake in to the pond to try dredging for it, thinking it might have blown or been washed in during one of the floods.

He said as soon as he walked in to the Tank paddock, he remembered where it was: we took it up the hill when we were draining the tank earlier in the year and had left it there because we'd intended to go back and drain the tank again.

I don't always come every day to check these cows and calves, relying upon calls from mothers or babies to alert me to any trouble.  But I do come and look at least every other day because calves or cows can become ill and neither would then be calling for the other. 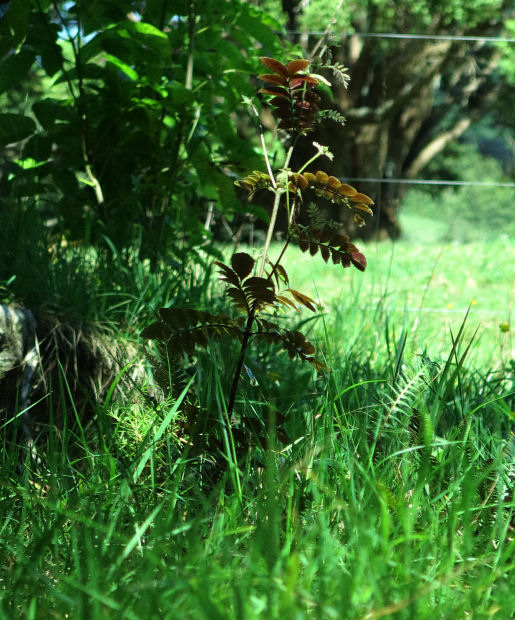 There are many pretty things around in spring time; here a Towai seedling in a bit of reserve area beside the track down to the Tank paddock crossing.  I really like its colours in the green.

Out doing my 2.15 check this morning, I heard the call of a Koekoea, a Long-tailed Cuckoo.  Don't they sleep?  At this stage of the year they must be on their migration south from up in the islands, just passing through. 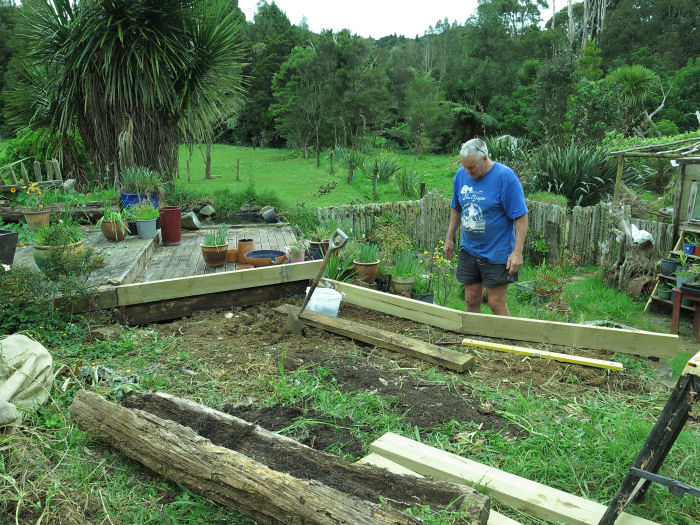 Stephan's at it again, altering the garden.  He had thoughts of building another raised garden bed on the ever-decreasing lawn area until I suggested we remove some of the weedy mess that existed along the top of the stone wall where he's standing here on the seat below. 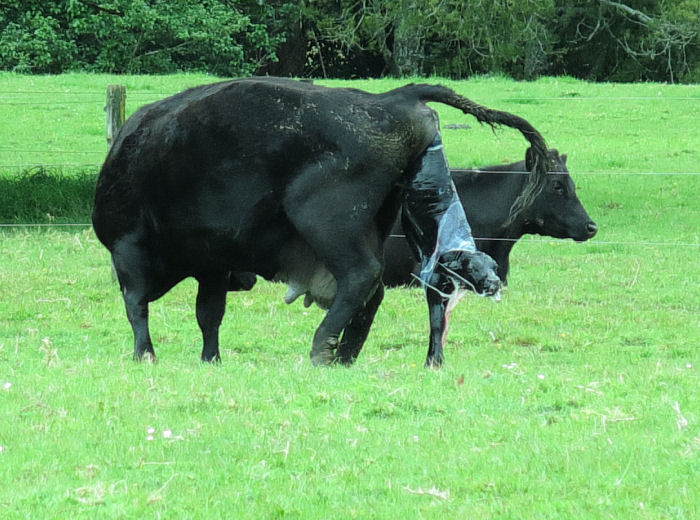 613 calved just after 1pm, a bull.  They're fun to watch when they do this, the calf suddenly conscious, blinking, shaking its head as it hangs, helpless until its mother gives the final push to release its hips from her body. 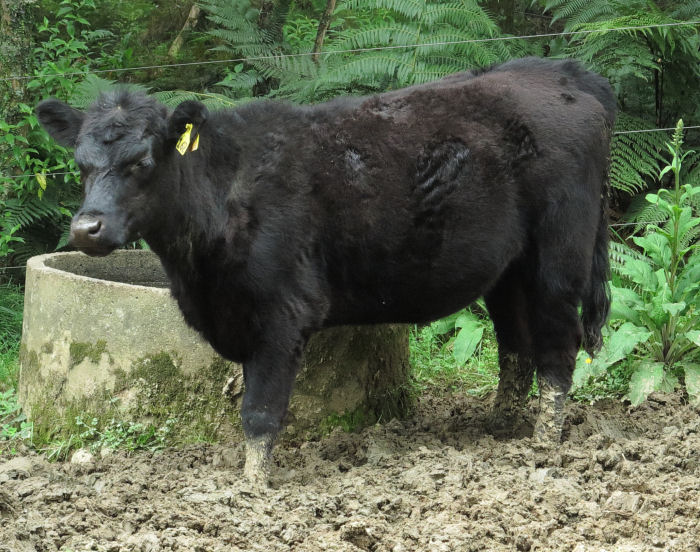 Gertrude 162 is looking better and better, after her skinny period earlier in the year.  I don't know if she'll reach mating weight or not.  She has until late December to do so. 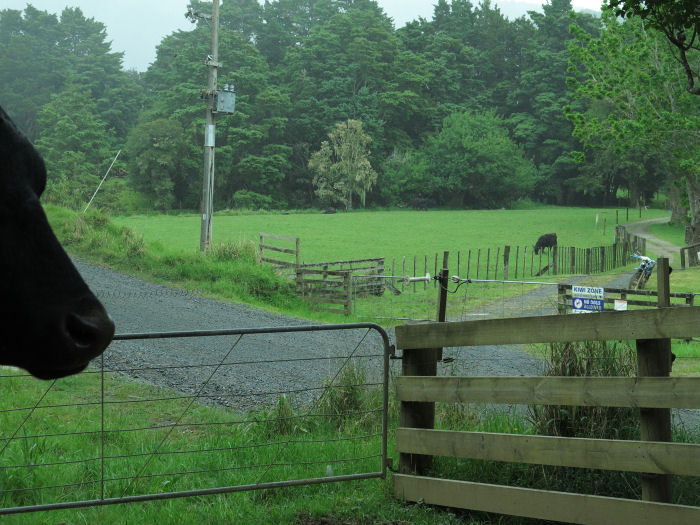 I sat down next to Zeb, under a big tree to stay dry as light rain fell, and watched through my binoculars across the road to the Pig paddock.  R2 heifer 792 (Endberly's daughter) had been in labour for a while and I was waiting for something to happen to indicate it was going as it ought.

She was lying just to the left of that light-coloured tree - a Totara full of lichen. 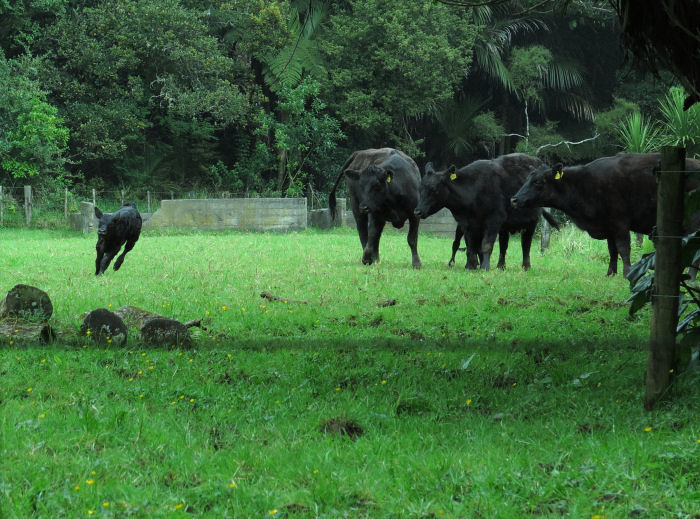 Half an hour later from the other end of the paddock, down by the bridge, I watched Queenly's calf running around like a mad thing, obviously quite recovered from her difficult start.

792 is on the right, with the pained look on her face. 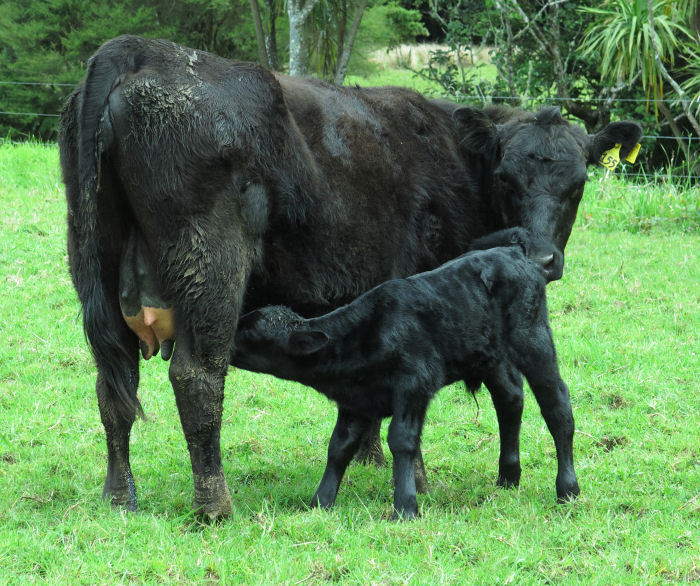 Imogen and her daughter are looking more settled.

792 paced around with lots of mooing and eventually produced a couple of feet.  Stephan went off to town and came home again and 792 having made no significant progress, we put her up the race and got chains on the calf's feet and Stephan pulled and we had to stop in a hurry as 792 began to collapse onto the rail behind her.  The calf's feet and nose were out by that stage and they were about to get dangerously caught on the rail as the heifer went down.  Fortunately we were able to get the rail out before she put too much weight on it but then couldn't stop her from stepping back along the race as we pulled.  I wanted her up in the head bail area so that if she went down, we'd be able to get her out on either side. 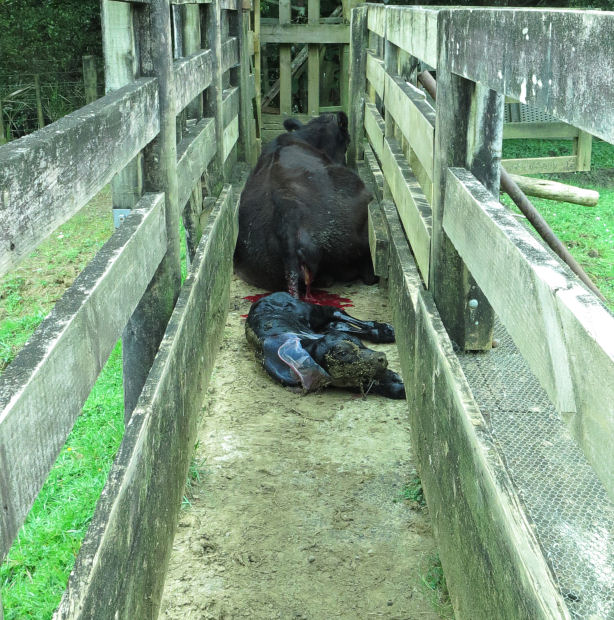 But we needed to get the calf out so had to carry on and 792 went down on her bum and was in a really odd position for a few minutes, during which we couldn't do much at all until she rearranged her front legs into a normal sitting position.  Then we were able to pull the calf out as she lay in the race, since that needed to happen regardless.

He is a biggish bull but didn't take too much effort for Stephan to pull free.  He's been growing for 282 days, a couple more than I expected.

Then we looked at her and tried to decide what to do next.  She's young so still quite narrow and her left hip wasn't caught under the bottom rail, so it looked like she might be able to get up without any difficulty, so we waited.  Eventually she did.  Thank goodness for that. 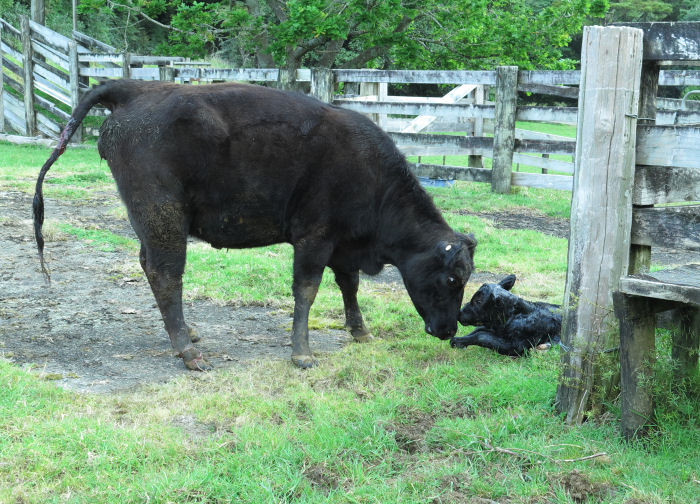 Stephan moved the calf out under the rails in the crush pen and I shooed 792 back toward him and she sniffed him, realised he was her calf and began licking him clean.

There now being no imminently calving heifers, I took the opportunity to go to bed at a decent hour and not get up in the middle of the night.