The week beginning the 8th of July 2017.
Saturday the 8th 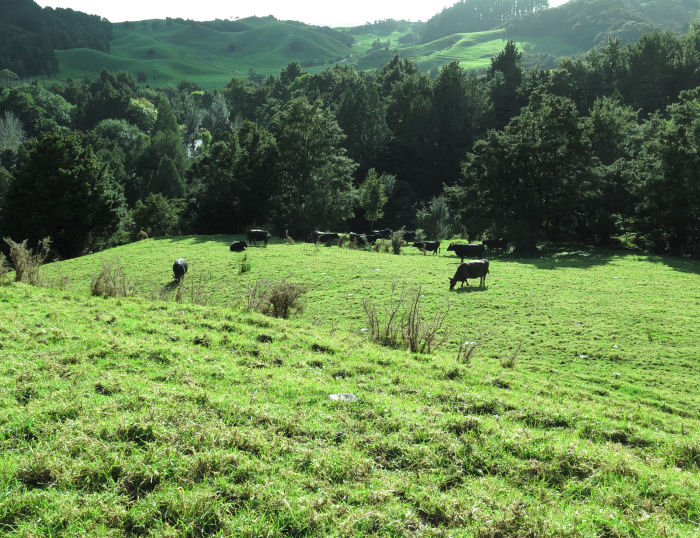 While it wasn't raining for a few minutes this morning, I took a break from party-preparation house-tidying to go and check the cows Over the Road.

Watching the steam rising from their wet backs in the sunshine, I thought how nice it is to live where the air is warm when the sun comes out in winter.  I always remember Stephan's comment about being in Christchurch a few years ago, in November, when even in a sheltered spot in the sunshine, the air was freezing.  Here it is rare for the air to be that cold. 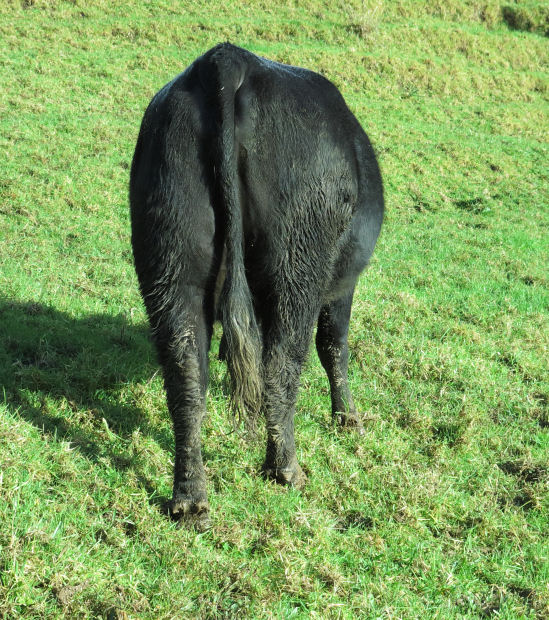 Gina 142 is still looking well-covered.  She and the other R3 first-time pregnant heifer, 773, should be ok with the cows in terms of feed but I am keeping an eye on them, in case they show signs of losing condition. 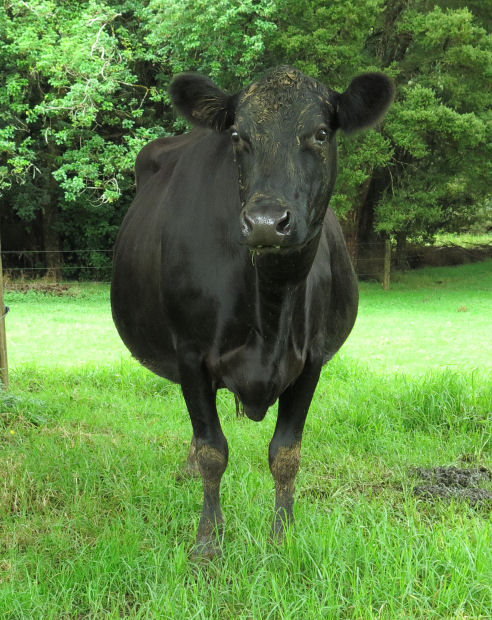 Zella watched me setting the gates for the pregnant heifers with an expectant look: she was out of luck; she and Demelza are semi-permanent residents of the Windmill paddock for the winter. 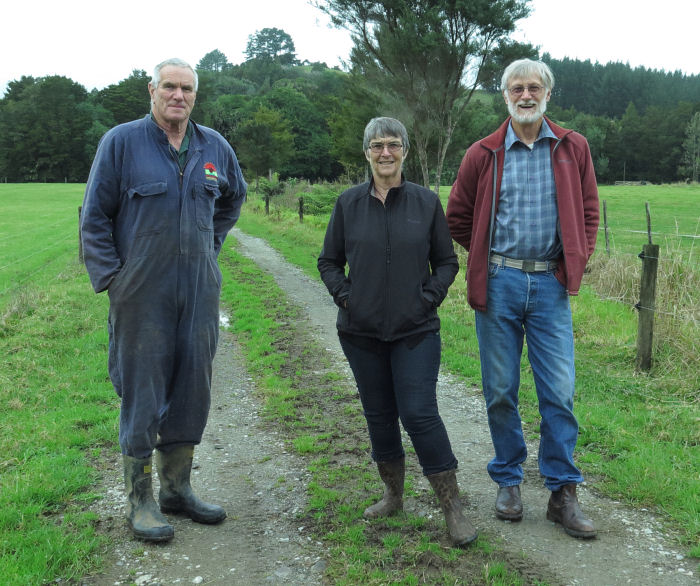 In the late afternoon, our Fortieth Anniversary celebrants began to arrive.

A walk out onto the farm seemed a very fitting thing to do with Elizabeth and William, since it wasn't raining.
There are hidden beer bottles in this photo. 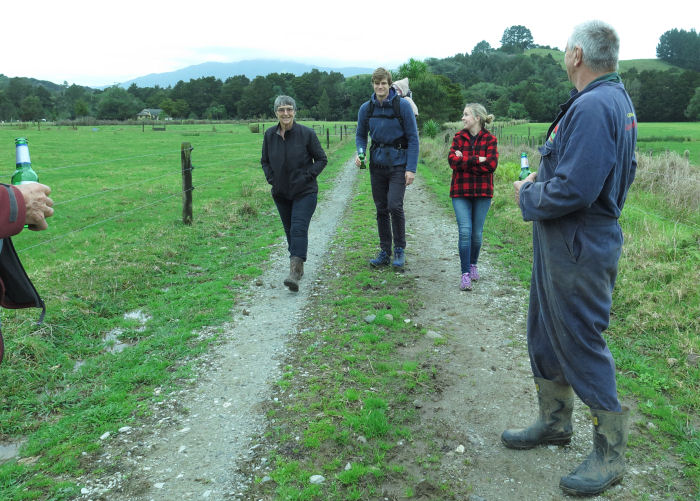 Anna, Simon and baby Evelyn arrived as we walked and caught up with us.  This was our first since-birth meeting with Evelyn!  (She was present on the farm for Gertrude 162's birth last year.) 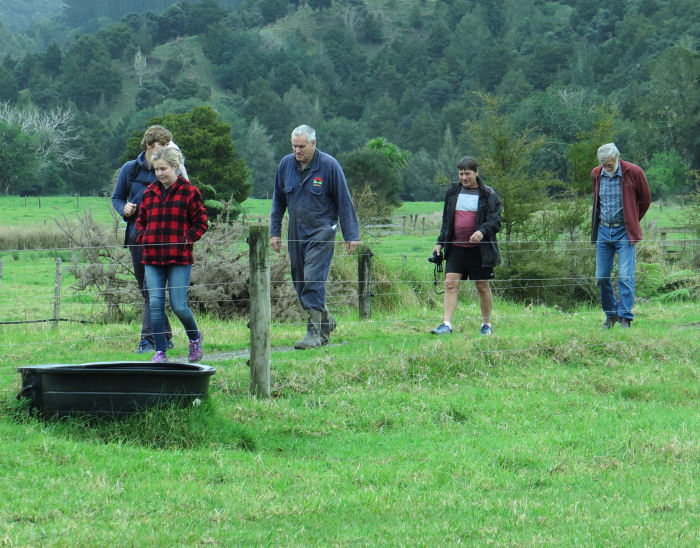 And as we returned we met Edwin (Sue had opted to settle comfortably beside the fire and wait in the warmth).

The family in order of birth are Richard, Elizabeth, Stephan, Edwin, Rachel, Andrew.  While only Stephan and Andrew lived here when the family moved to the farm, all have had deep relationships with this place.

Stephan often talks of the day he and his father, Patrick, first walked onto this farm.  Patrick was on the point of retiring from veterinary practice in Gisborne and he and Muriel wanted to move to somewhere with a bit of land.  The plan was for Muriel and Patrick to retire while Stephan farmed.

They'd already spent a year or so looking for somewhere in the Far North, thinking to move to the community in which Elizabeth and William were settled, but had found nothing suitable and available.  And so Patrick and Stephan drove to the Coromandel for a look around, where the rain fell upon them in streams and they decided they'd drive on up north to Kaitaia again instead.  The next morning they contacted the real estate agent with whom they'd previously dealt, who said that he'd just received a listing which might suit them well and they met and came out to Diggers Valley.  Stephan and Patrick walked across the little wooden bridge to look out across our beautiful flats and knew this was the place for them.  They didn't even look at the old house, just signed the documents and bought the farm.

Muriel and Patrick lived here for about fifteen years of happy retirement before Patrick had a stroke and he and Muriel needed to move closer to town, at which point the house on the corner and its small area of surrounding land, was subdivided from the farm and sold, and Stephan took sole ownership of the farm.

A very short summary of a much longer story!

While dinner preparations commenced, we all gathered in the kitchen where photo albums were shared, along with highly entertaining memories of all sorts of family antics.
They're such a lovely clan to be a part of.  My own history with them is now quite extensive - earlier in the year I found an old diary, in which I had commented on meeting Stephan on the 15th of October, 1981!  They'd only been in the valley for four years and my family had just moved in down the road.  I don't remember the event at all but it obviously made an impression on my 16-year-old self at the time. 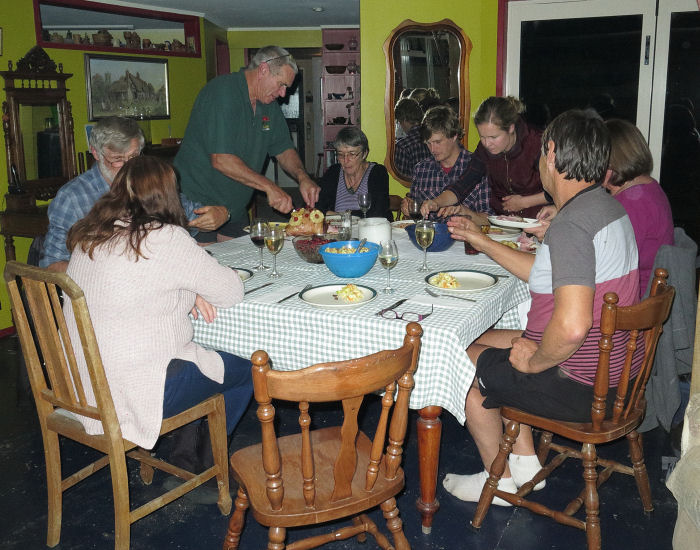 The ham was from this year's pig and was delicious, followed by two desserts Elizabeth brought because they were regular Muriel creations on the farm (apple and rhubarb pie and ... something I simply cannot remember), and Stephan had made a delicious cheesecake with Bailey's Irish Cream.

Some of us may have drunk a little too much wine, as there was quite a bit of it about.

I haven't been drinking wine for a while now and today I remembered why not.  I have concluded that it would have been better to have continued my abstinence.  It's not just the headache (my intolerance means it only takes two or three glasses to make me uncomfortable the next day) but the sense of gloom and hopelessness are even worse.  It was that psychological "hangover" which had recently led to my decision to stop drinking altogether and after an extended period without, the change in my mood today is marked.  The feeling lasted for another two days before I felt normal again.  I think that's enough evidence collected. 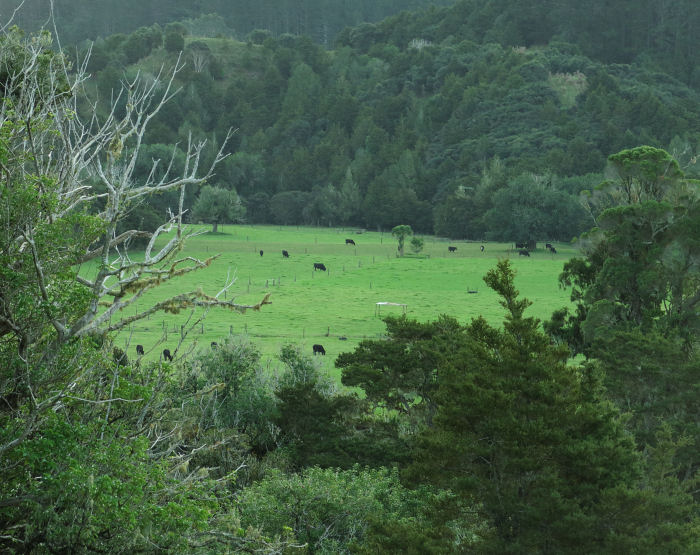 Looking down on the farm this afternoon I noticed the brown tinge to Mushroom 1, where the thin/pregnant heifer mob are currently grazing.  They needed to be moved more than I needed to be walking around up here looking for the cows!  I went down and shifted them.  They should have had enough feed for the day but once they run out and start walking around looking for more, they make a mess in the wet ground conditions. 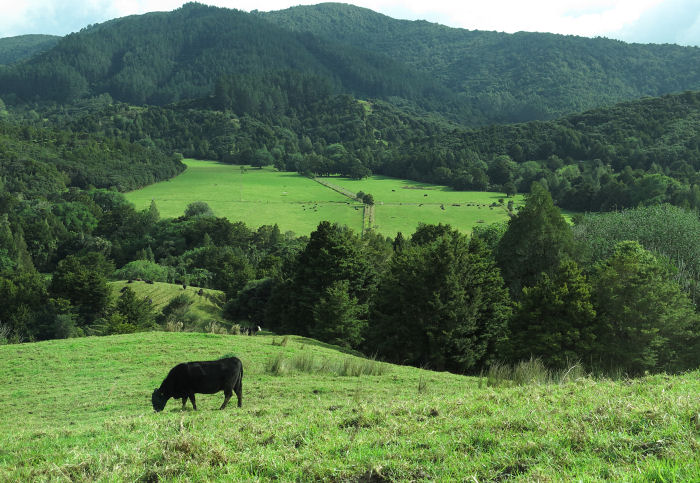 The power went off just after nine this morning and the information we were able to glean indicated it could be off for a few hours, so I went back to check on the cows - and the tape along the top boundary, since there are a load of hungry dairy cows on the other side of the fence.

Most of the cows were sitting around on the hillock down to the left, with only a few grazing further up.

Electricity was restored just after 2pm, although the fault was reportedly not found.  How did it come back on then?  It's nice having gas for cooking, so day-time power cuts don't matter very much - except phone calls mean sitting in one place, tethered to the wall; and there's no internet. 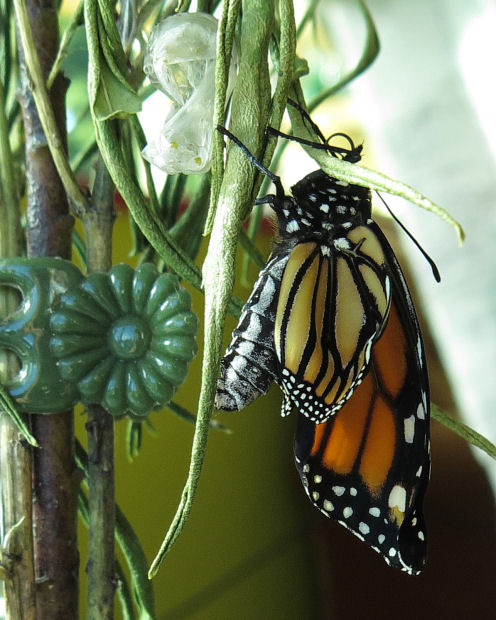 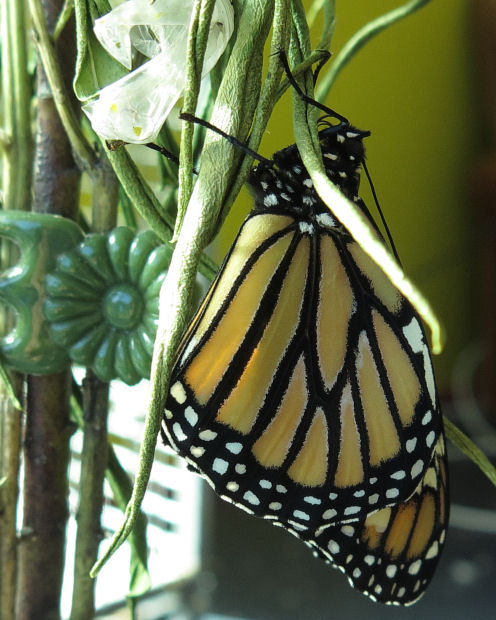 The last of our current crop of Monarch butterflies hatched this morning in the warm sunshine.  When I first saw it and took a picture, I thought it was deformed but it must only just have emerged and its wings were still crumpled.  Ten minutes later I came back and took the second photo.

I put it outside on a plant in the sunshine for a while, but the air was so cold, I later brought it back in and gave it some honey to try and revive it.  It flew beautifully away the next day, just before some very heavy rain. 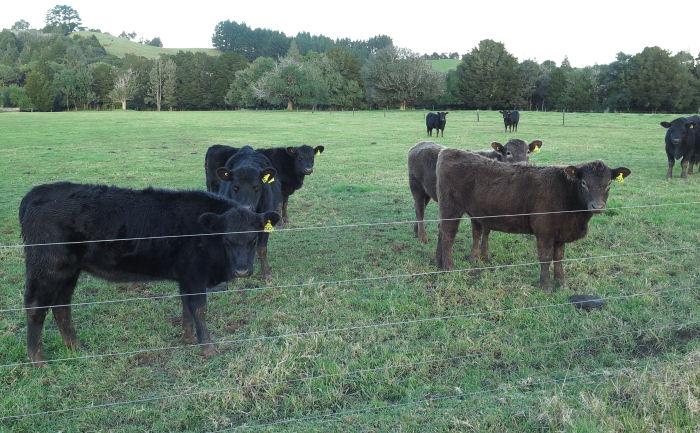 This lot would have liked to move to somewhere new but while feed provision has necessarily slowed, they do have shelter down the other end of Flat 2.  Today was very cold, our maximum temperature being a chilly 10.5°C. 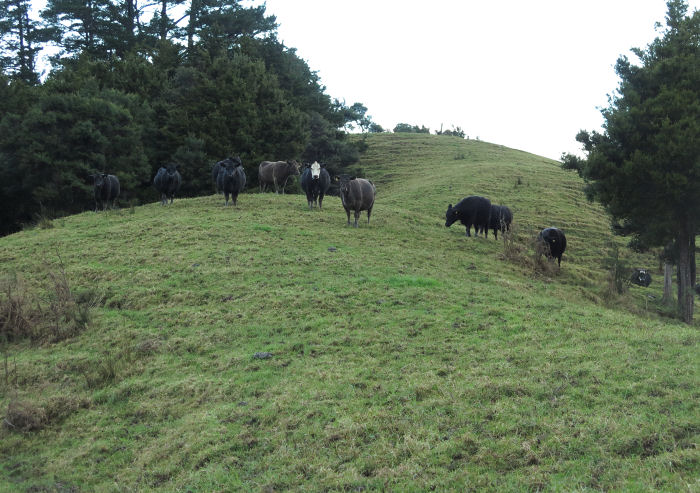 Stephan and I went together up the hill Over the Road to check the cows and then, because they'd eaten most of the grass, we called them down the hill as we walked, to go into the smaller other section.

Still really cold and wet and I went off to town again, back to the Excel training course, hoping there'd be more to it today than last week.  There wasn't.  On the way home I called in to the library and picked up three books on Excel and came home and learnt more in half an hour than I had in the hours at the course.  Such is life.

But I did have some interesting conversations with some of the other course participants, which is always a benefit of getting out and taking part.  I've also been spurred into action on learning a programme I should have got to grips with years ago and never did.