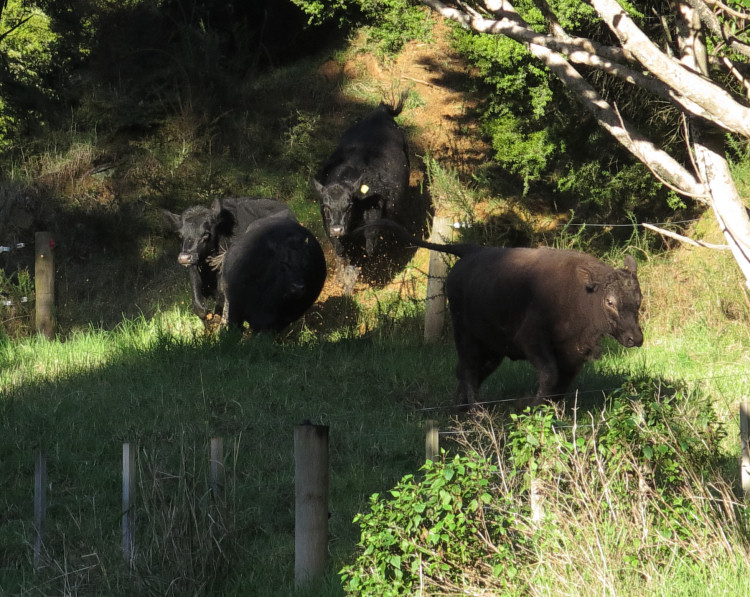 This morning was the coldest, so far, of this winter: 0.5°C measured by my thermometer on the Puriri tree near the house.  There was a light frost.

The grass growth has noticeably slowed over the last week as the daily average temperatures dipped below 10°.  I think it's time we weaned the last of the calves.

This afternoon we called them down off the hill Over the Road.  Sometimes they come down at break-neck speed! 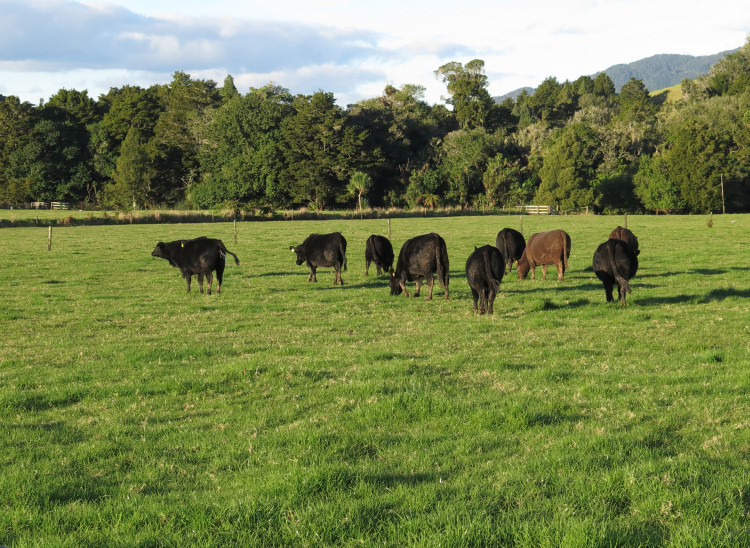 We brought them across the road and out to the flats, where I drafted the four cows into Flat 2 and let the youngsters go past me to the Flat 3 gate.

This was probably the moment some of the calves realised what had happened... 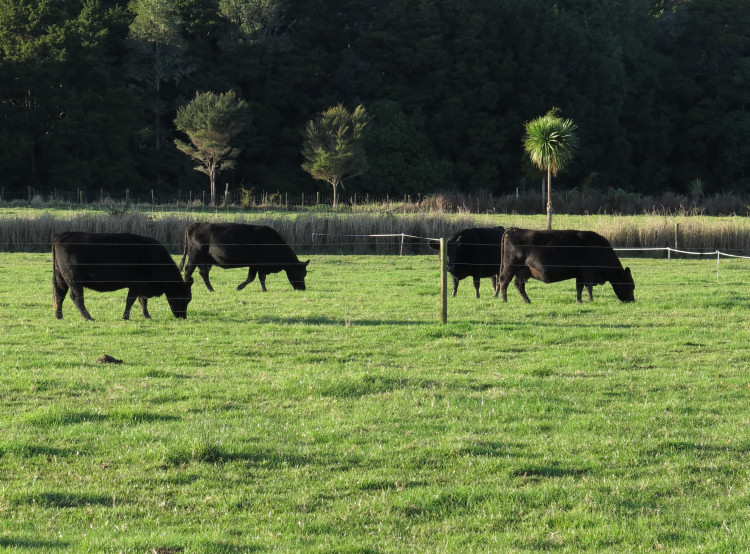 ...their mothers now being on the other side of the fence. 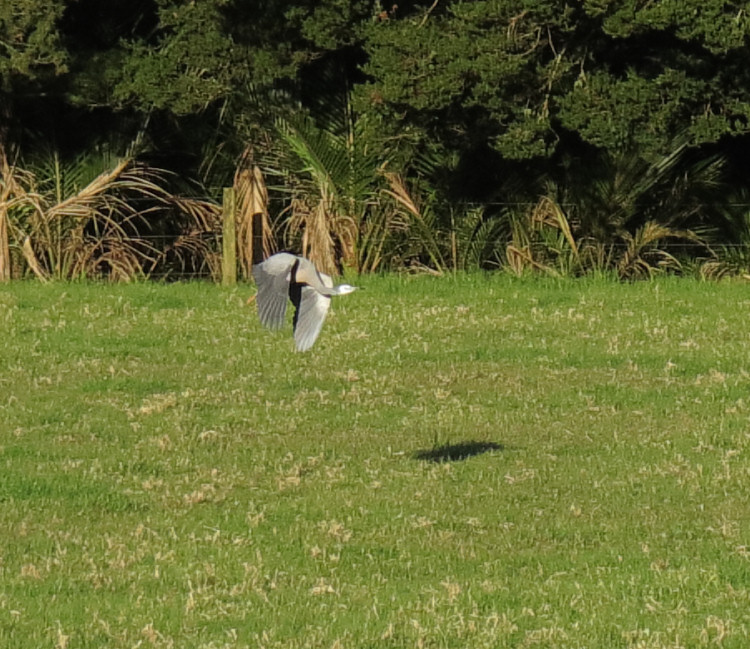 This bird can just be seen at the far right in the photo of the young stock, above.  We climbed through the fence and walked down Flat 2 and the bird took off as I had my camera focused on it.  There are quite a number of these Herons around this year. 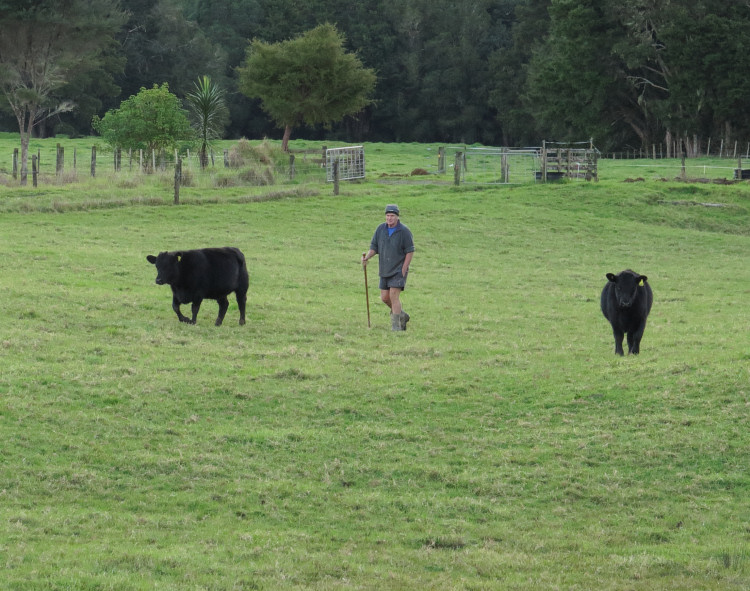 Zoom and Spot had no idea this was the last time they'd leave the same paddock as their mothers, of an evening.  For them this is just the same as any other night.

Stephan went down the road to Erika's birthday party, while I stayed quietly at home and did a lot of near-deadline reading.  I'm not being much of a party sort of person these days. 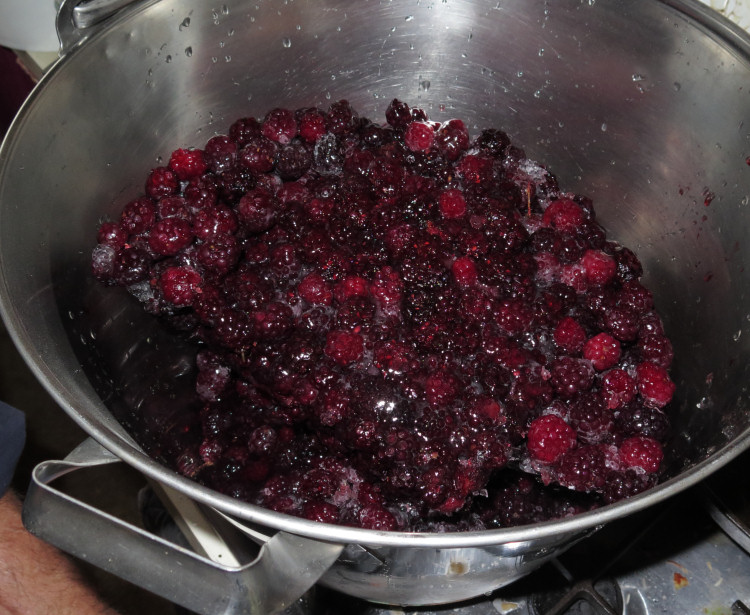 Because we're freezing milk every day at present, we're running out of freezer room so out came the blackberries, ready to make jelly. 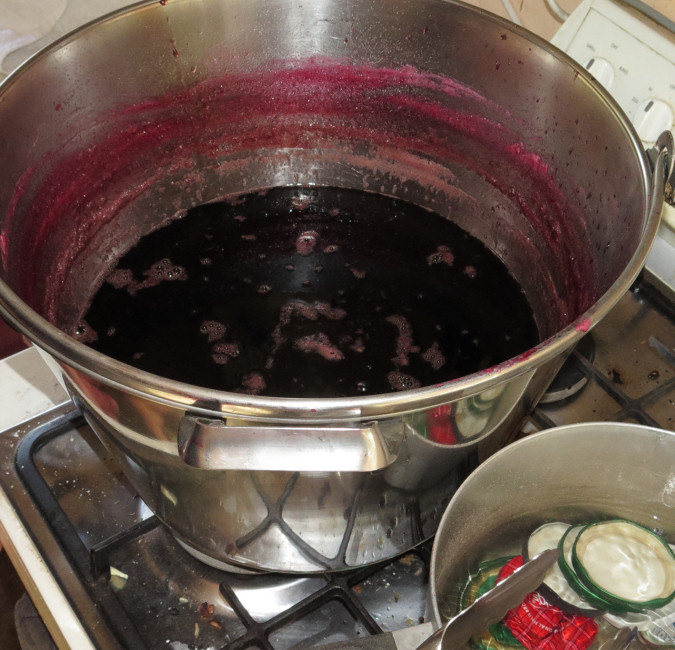 Blackberry jelly - the berries were boiled with apple, strained overnight through a cloth bag and the juice boiled again with sugar before bottling.  Just like Granny used to do.

Actually I mostly remember my Granny Renner making guava jelly.  I can remember the smell and the huge bag of fruit dripping where it hung suspended in her back porch.  Goodness knows what she did with all that jelly; must have given lots of it away to her friends around Coopers Beach.  She lived in the house next door to the Motel where we lived until I was seven.  (We didn't live in a motel as guests, this was Motel Pamir, run by my parents.)  The bag of fruit might not have been as big as I remember, since I was then quite small. 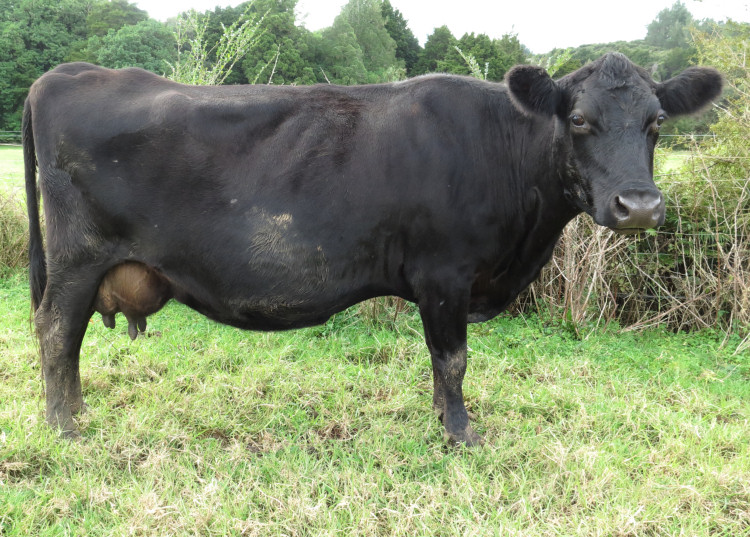 Zella comes in for milking as usual in the morning but then she and Demelza come back to Flat 1 without their daughters.

Because Zoom hasn't been taking much of Zella's milk during the day, we decided we wouldn't need to milk in the evening, as we did in other years when weaning the calves at an earlier age.  Zoom was nine months old yesterday, so Zella's production has naturally reduced as her daughter gradually required less milk. 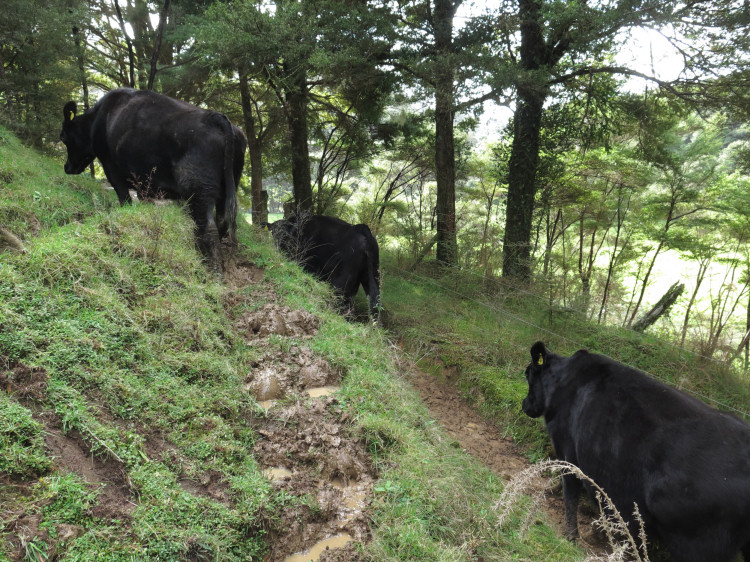 Because the new culvert at the front end of the PW is very soft, I don't want to use it any time soon, until it's nicely consolidated and has some gravel over the top.  That meant getting the cows to go out of the paddock through the Route 356 gate.  I'd opened it yesterday evening for them but by today only four cows had taken themselves away to the next paddock.

Getting this lot to move was tricky.  Sometimes they'll follow my call readily but on other occasions, like today, they'll just stand and look at me.  Eventually, since they really needed to get out of here to some new grass, I got behind these three and convinced them to go ahead around the corner and then the others all followed. 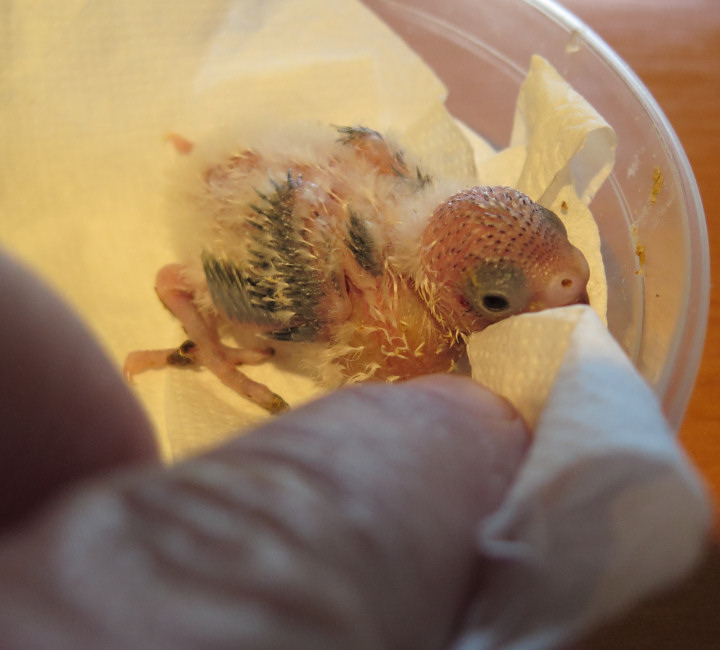 Last Friday afternoon I took this tiny Budgie chick out of the nest box because, as the second hatched, it shouldn't have been the smallest of the three in there.  I've been feeding it with some food I bought for just this possibility, every couple of hours.

I am a bit suspicious that it is not entirely right and that there may be a reason for it falling behind in growth and not being fed well enough by its parents.  But so far it seems to be doing well enough, feeding enthusiastically and it seems healthy. 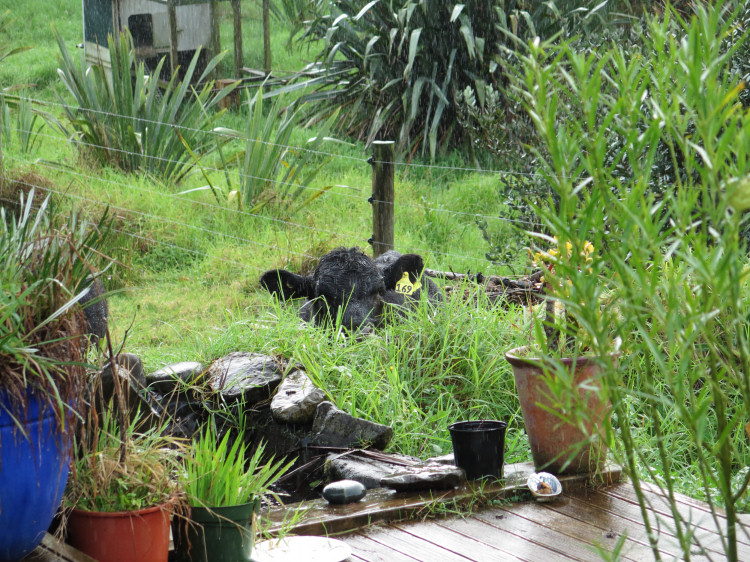 In the rain this morning Spot was eating the Kikuyu grass along the top of the garden fence.  The House paddock was really the only place they could be during the three days of weaning time where they'd be fairly close to their mothers still, but there isn't really enough feed here for them and they'll have to be moved tomorrow. 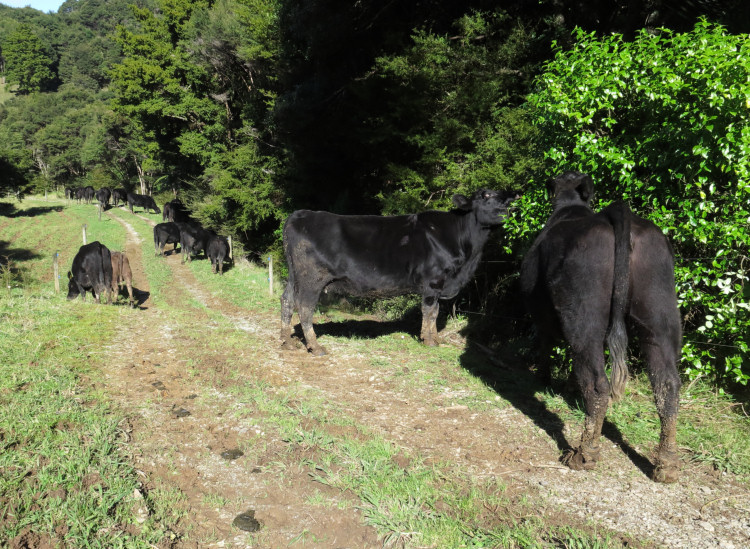 In lovely noon sunshine I moved the 25 cows from the Back Barn paddock and along the lane.

Jet 777 on the left and 773 on the right, spent several minutes, until I moved them on to catch up with the others, eating as much of this Hangehange as they could. 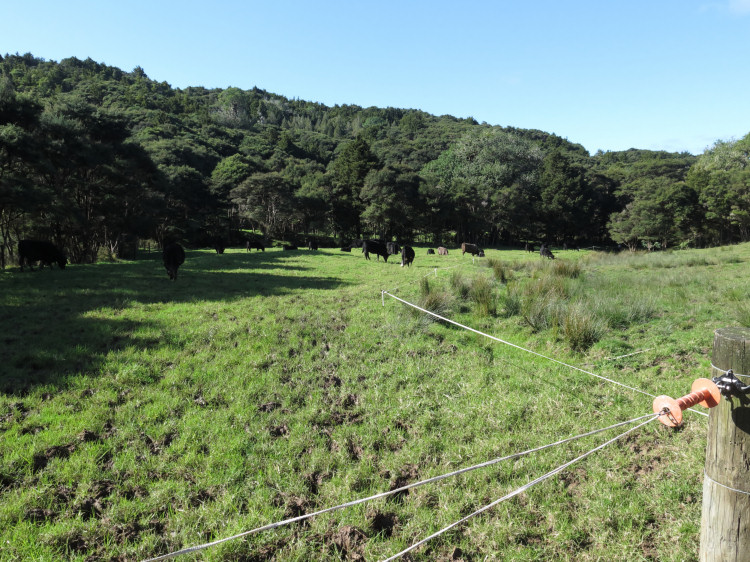 The Blackberry paddock is quite wet and I'd earlier decided to run a tape down the edge of the drain to keep them out of it while the ground is so very soft.  There isn't a great deal to eat, so they only spent the afternoon here before I moved them on across the stream to the Swamp East.  Putting them through this paddock saved me a lot of effort in running tapes along the edges of the new drains along the tracks. 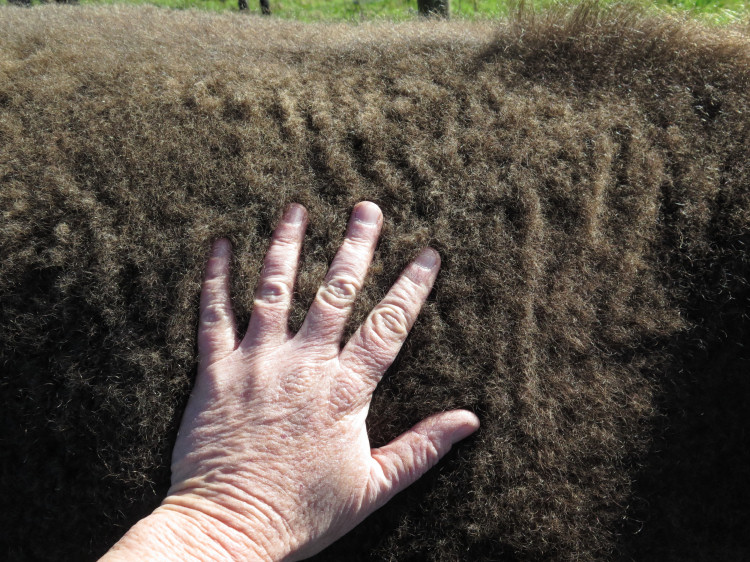 This is 807's thick, fuzzy, winter coat.  Some animals with Hypotrichosis have very sparse hair, leaving them cold in the winter and thus not really able to live comfortably in some climates.  Fortunately all my Hypotrichosis animals are able to grow these thick and insulating winter coats and so they thrive. 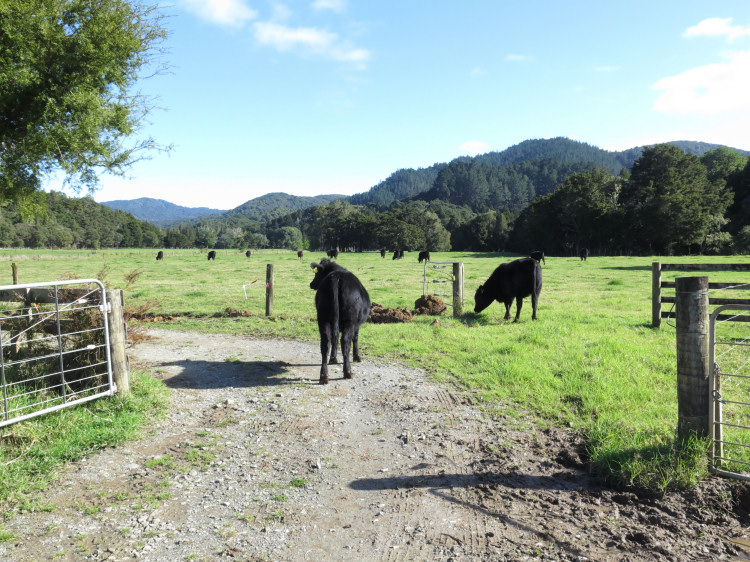 After moving 807 and her young friends into the Windmill, I let Zoom and Spot out of the House paddock to join them.  Spot obviously didn't want to go far away from where she could see her mother.

We had a lovely evening, dinner for our newest neighbours up the road and our friends Gaye and Brian.  Stephan cooked a roast beef with Yorkshire puddings, followed by a Rhubarb and apple crumble with some of Zella's ridiculously thick cream.  Lovely. 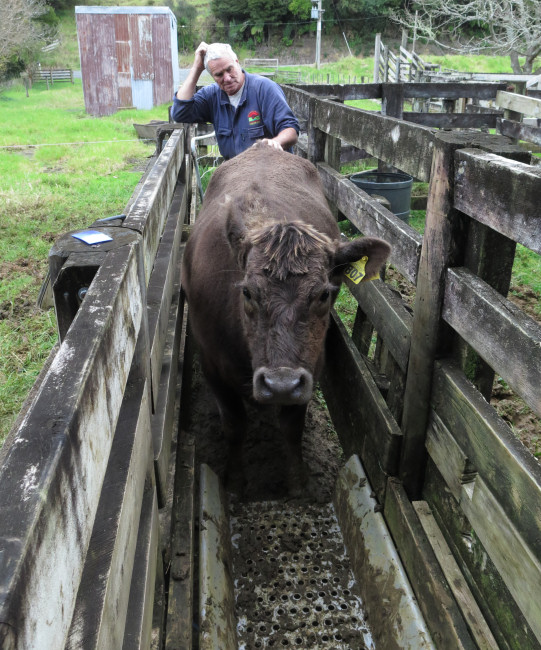 I've been getting the occasional "live liver fluke" report on the works cattle kill sheets and as I hadn't worm-drenched all the cattle for a fair while, decided, in anticipation of a hideously wet winter, to do them all this year.

For the correct amount of drench to be applied to each animal's back, each must be weighed and that includes young Ms 807, who ordinarily refuses to go up the race.  Having used a steel gate in the crush pen to good effect before, Stephan fetched it and once confined to a space the same width as the race ahead of her, she walked forward very calmly and then, after this picture, stood calmly on the scales.  Weirdo.

If this hadn't worked today I would have given her the same amount as Fancy 166.  My estimate of their relative weights was pretty good: 166 weighed 468kg and 807 weighed 464kg.

The sky was overcast with a feeling it might rain but the forecast had predicted this sort of sky without rain and fortunately that proved correct.  The pour-on drench requires at least two hours dry weather after application and we got much longer than that.

The other job of the day was to reorganise the mobs.  The 25 cows (and the four most recently weaned) had to be drafted three ways: the pregnant R3 second-calvers went to the young mob, the other young pregnant cows to the "thin cow" mob and the mature cows became a mob of 15 animals.

The one steer we have went to join the three little bulls because when one of them is sold, they'll be happier as a mob of three animals than just two.

We ended the day with a young mob of 13, a thin cow mob of 14 and a cow mob of 15.  That will either be extremely confusing or a really good split in terms of remembering how many are in which mob. 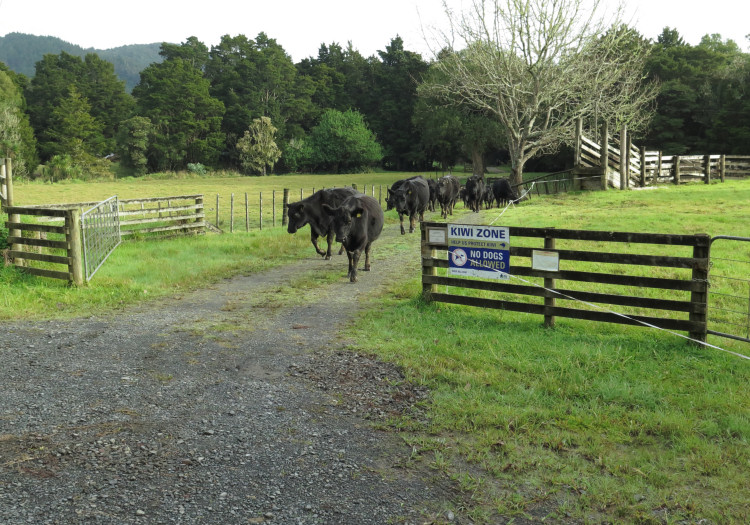 The "thin cow" mob went Over the Road this morning.  It's a very strong bit of country, always does the cattle well, so I'll keep this mob over there for as much of the winter as I can. 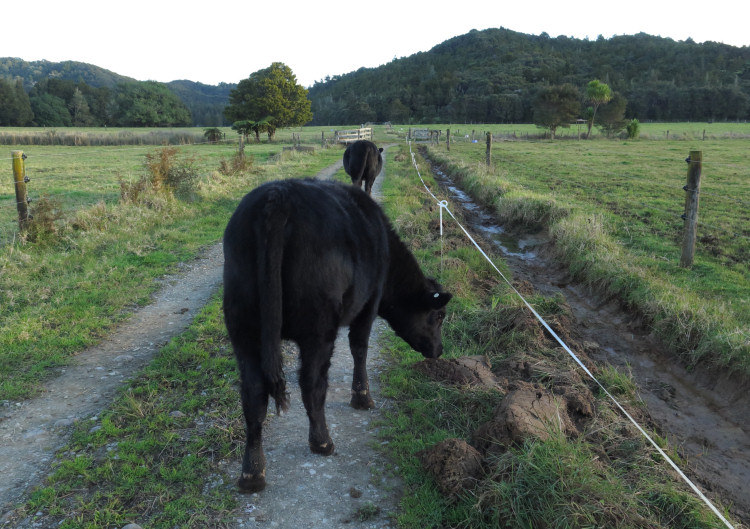 The youngsters had spent the rest of yesterday in the Windmill but needed to shift this afternoon.  Zoom and Spot were not really mixing in with their new companions and I had to take them out the bottom end of the Windmill and up the lanes to join the others again in a new paddock. 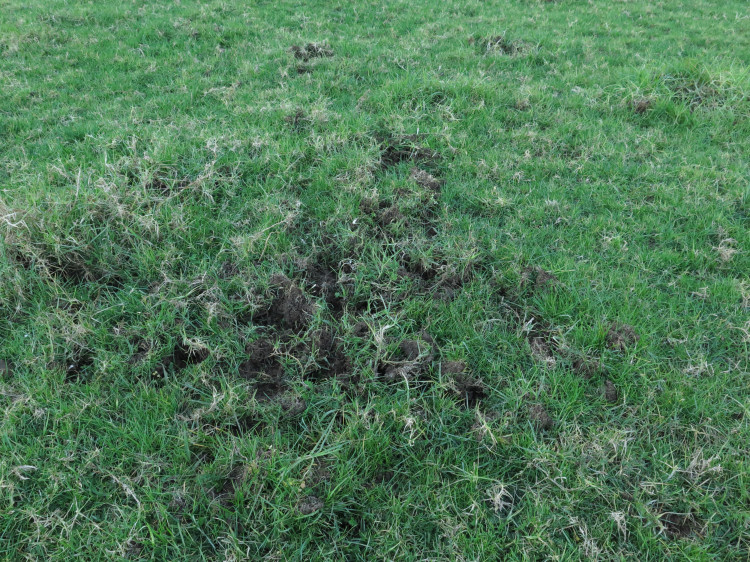 Feral pigs have returned to the Mushroom paddocks this winter.  Last year they were only out the back of the farm, which didn't confront me quite so much.  Damned things; they're making a real mess of this otherwise nice pasture.