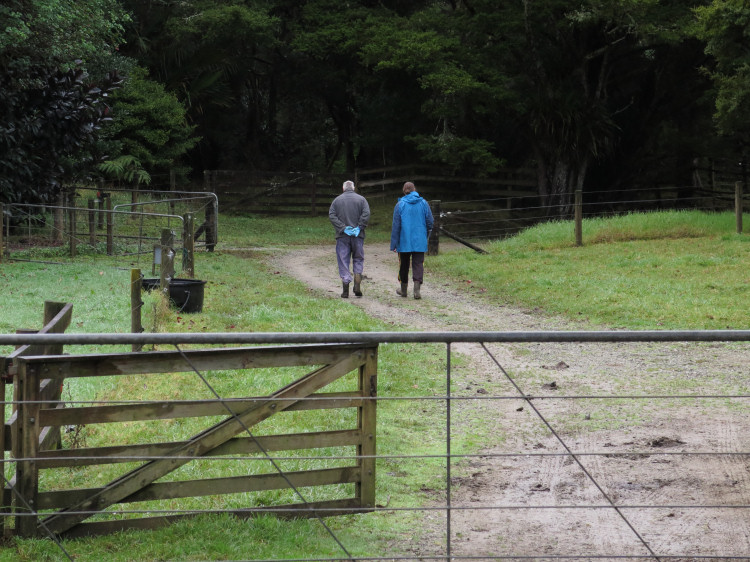 Nephew Jonathan and Char-Lien came to stay with us last night, up from Wellington.  I think this was the first time they've ever spent a night together on the farm, usually staying with Elizabeth (and William).

This morning Jonathan was up early to join Stephan for milking. 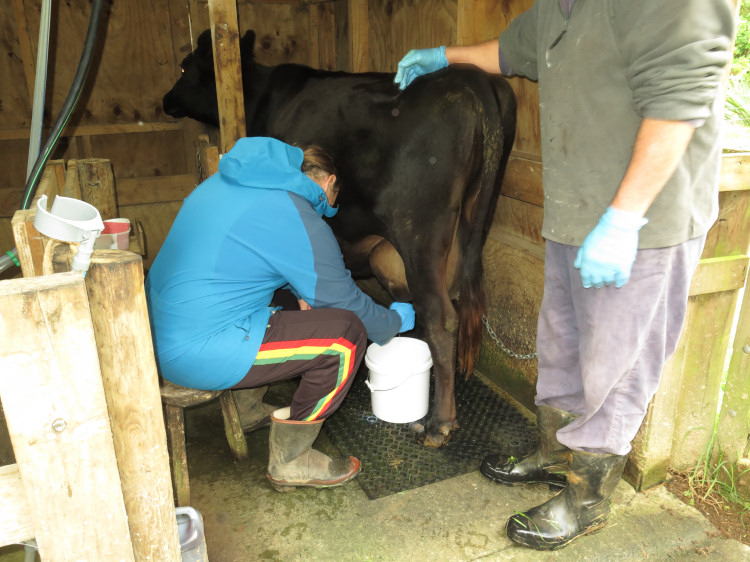 We think this was the first time Jonathan has milked Zella, even though Char-Lien reckons he's done so before.  I can't find reference to it in here, so surely it can't have happened? 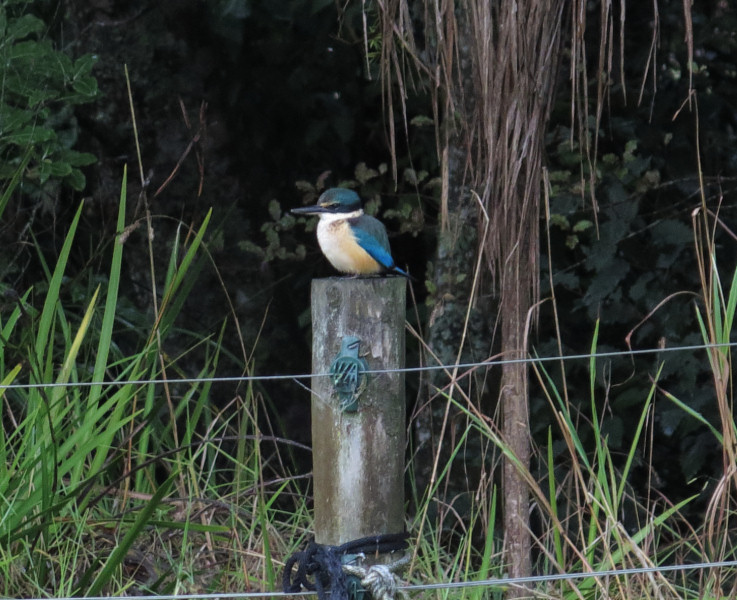 This one's for Renée, since she likes Kōtare: sitting on the post opposite the milking shed.

There is at least one of these birds hanging around closer to the house than is usual and I wonder if it is the youngster from last year's nest, used perhaps to some human proximity.

Glia and Zella clearly indicated where they wanted to go today, so I went and opened the gate to the little triangle at the bottom of Flats 1 & 2. 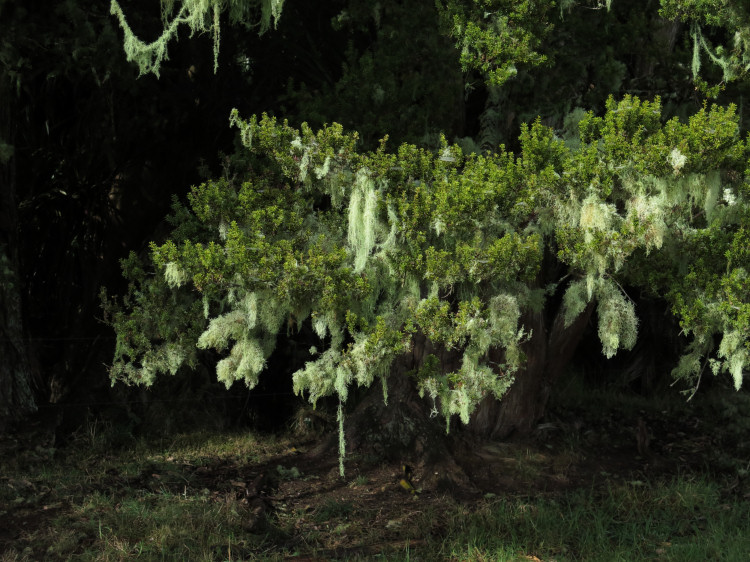 The lichen on one of the big Totara between the track and the stream is beautiful in some lights. 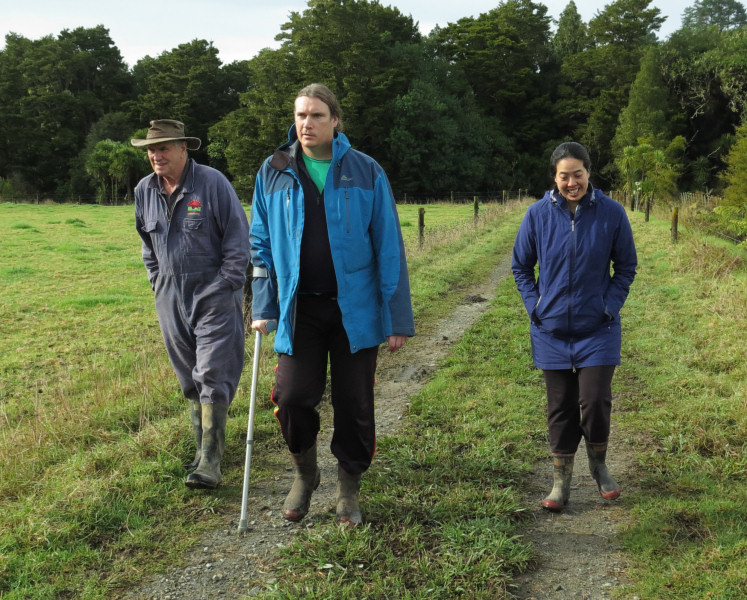 After breakfast and coffee, we all set out for a walk. 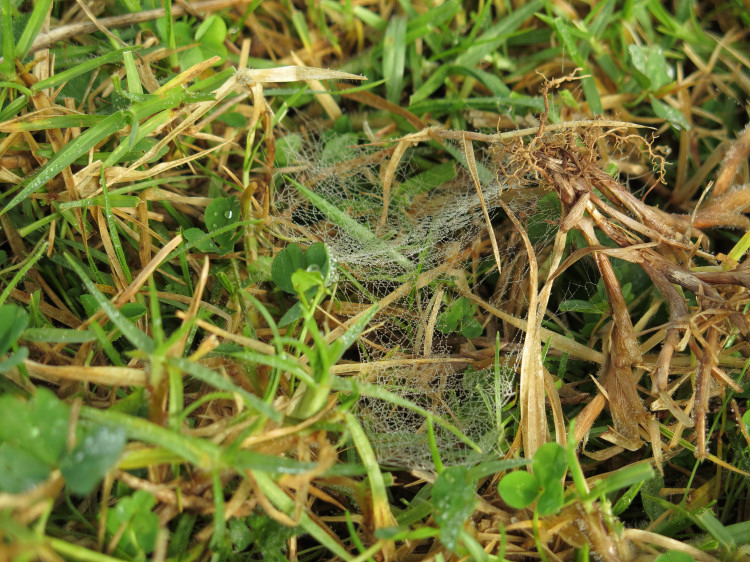 There's been a bit of drizzle about so the tiny spiderwebs in the grass were covered in water droplets. 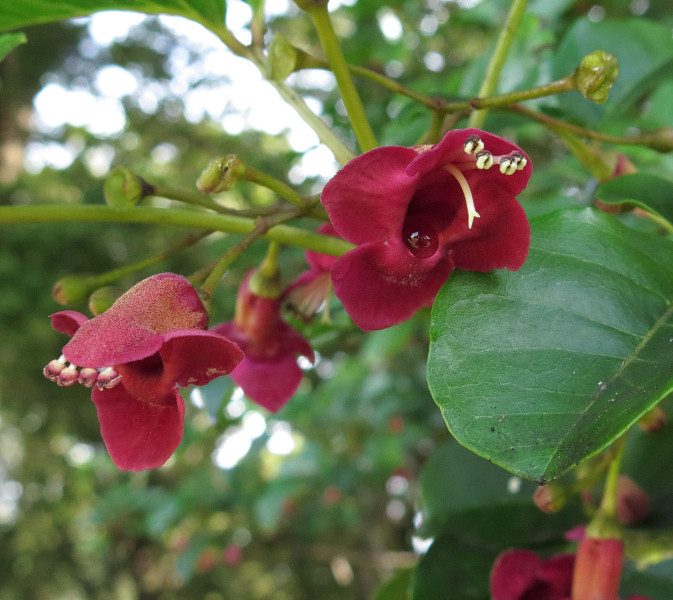 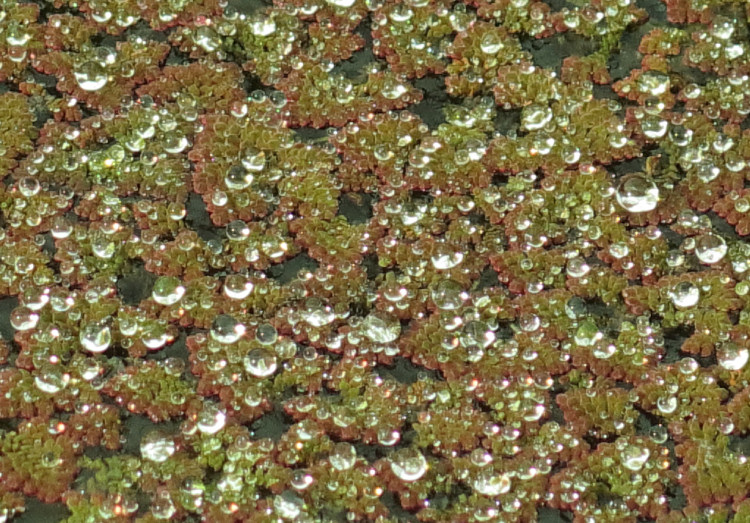 Char-Lien and I were considering the pond, waiting for two swimmers to arrive: Jonathan really wanted to dive into the pond and Stephan had to do it with him. 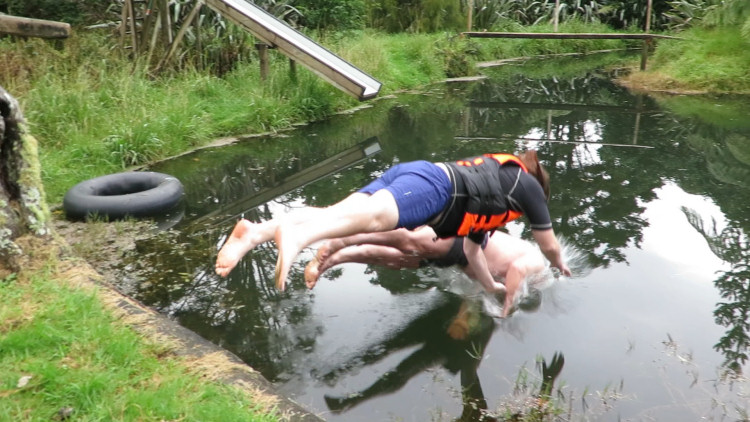 Standing on the edge of the pond Stephan asked Jonathan, do you really want to?  When he said he did, Stephan took his hand and they launched into the dive. 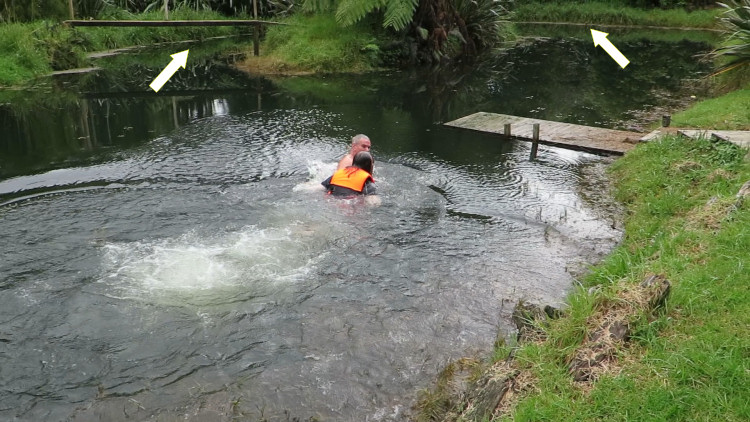 It was very cold, apparently.

The arrows indicate the Scaup's activity: she was sitting on the water at the right arrow until just after this moment, when the noise and disturbance obviously got too much for her and she dived and swam, emerging a few seconds later at the second arrow, before flapping off to hide somewhere behind the island.

I was worried she might be frightened away by two new pond visitors but Jonathan's swim was important and we just had to risk it. 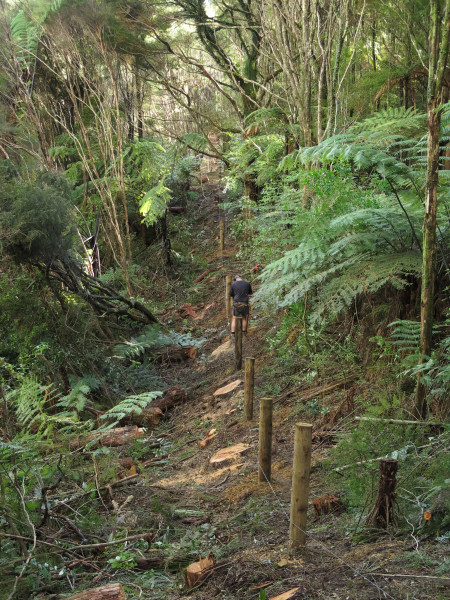 I walked over to Jane's to inspect work on the boundary fence. 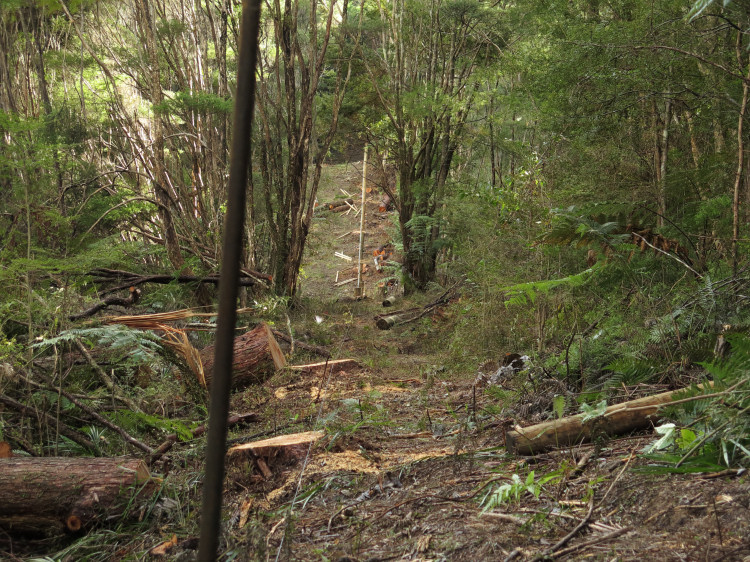 I walked along from where he was currently putting posts in, toward the corner of our place, in the Tank paddock.  The completely straight line of posts going up the hill in this picture, is the fenceline between the Tank paddock and Sandra's on the right.  Stephan is, rightfully, very pleased with it.

The 14 weaned cows were in the Tank paddock, so I wandered around and checked them all, before walking home. 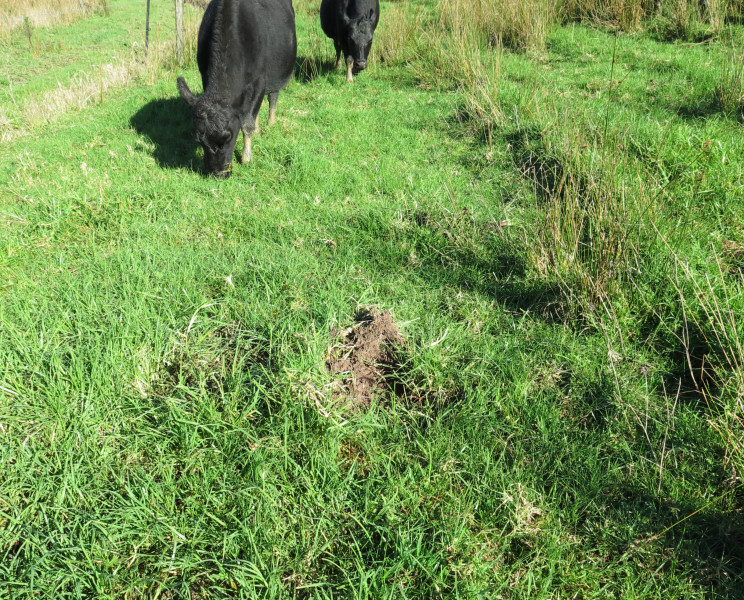 The weather was glorious today, lovely and fine, cold but sunny.

I moved the big mob from the Big Back North to the Small Hill and discovered that a number of big feral pigs must have been there first: there were several large clumps of turned-over pasture.  They really are a pain.

We took a sample of Zella's milk to the vet the other day to go to the lab to check Zella before we dry her off.  I've not detected any sign of infection but the test came back with a high somatic cell count (in response to infection) and Streptococcus uberis was cultured from the sample.  Good to know.  We'll treat her with the usual long-acting "dry cow" antibiotic when we stop milking.  Strep. uberis is usually picked up from the environment and Zella has had it before.  But while the vet thinks we have a problematic cow we should get rid of, I think Zella's done better than she often has, in showing no signs of infection through the season for the second year in a row.

To a funeral this morning, for Kelly Brydon, one of the early residents of Diggers Valley.  He moved here (to a property a little over half-way along the valley road to the other end, approximately 8.5km up the road from us) in 1934 as an eight-year-old with his parents, who'd acquired the property for dairying through a Lands and Survey development scheme.  After some time working away in other parts of the country in his early adulthood, he returned to Diggers Valley, got married and remained on that property until 1981.  It is now covered in pine trees.

There were many stories told, including references at several points to how hard it is to farm in this valley - tough soil conditions, high rainfall, etc.  The tough farming remains true on the hills, for sure.  Even the flat land has its difficulties, since it doesn't drain well.  But where else would we want to be? 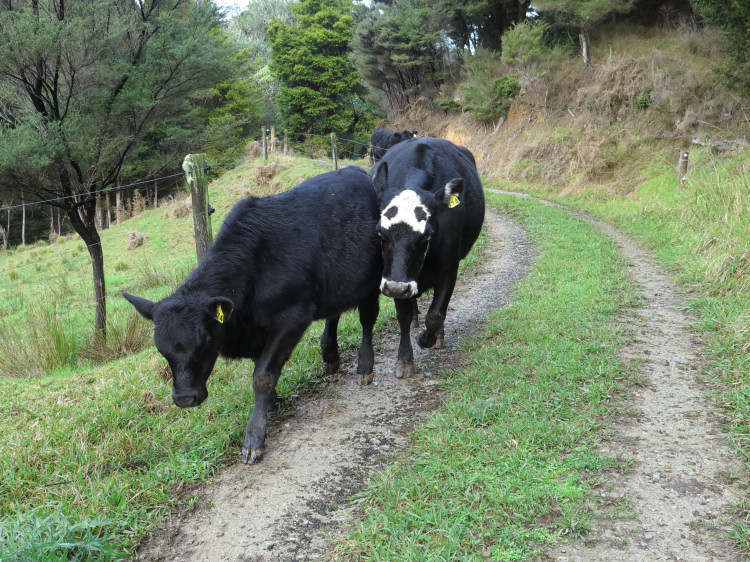 874 can usually be found with her mother.  Some calves are quite independent, happy to be away grazing between feeding times, others are more bonded.  I'm glad they don't know that weaning time is approaching. 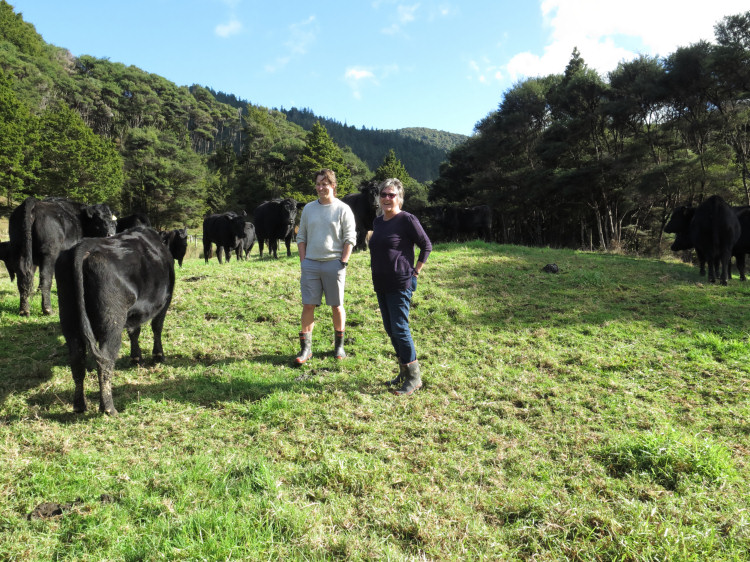 Stephan's sister, Rachel, and son David, came out to see us this morning.  (They came up for the funeral, Kelly being Rachel's father-in-law, David's grandfather.)

Stephan took a break from his fence and we all went for a walk out on the farm, as far as the cows and calves who needed a move from the Blackberry paddock, then wandered back home again. 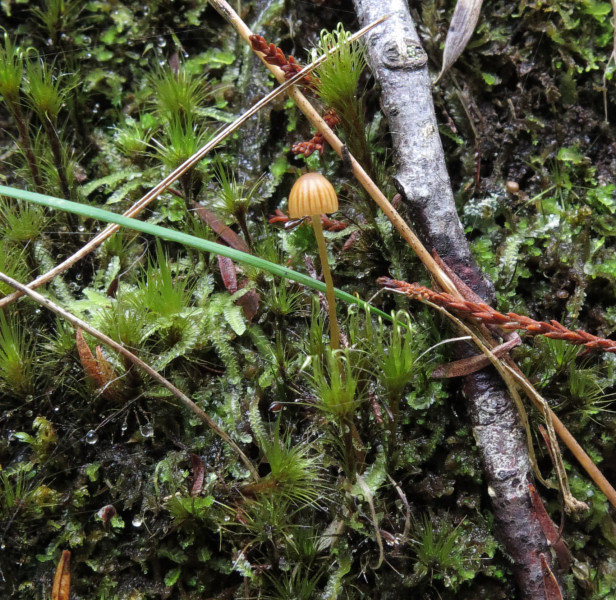 I love the colours and patterns of these little fungi, always growing amongst so many other interesting, tiny things.

Stephan spent some time cutting firewood with and for Gary from next door and then went off to the fence for the afternoon.

I figure that now it's nearly the end of June and the grass growth is slowing, I'd better wean the calves or we'll run out of feed.

I didn't weigh them today because it doesn't matter too much how heavy they are at this point.  The important weight for comparison amongst the calves in their group and with those from other years was the last one we did before weaning the sale calves, the 200-day (or thereabouts) weight.

The cows will have lost a little weight and the calves should all have gained at least 50kg since then. 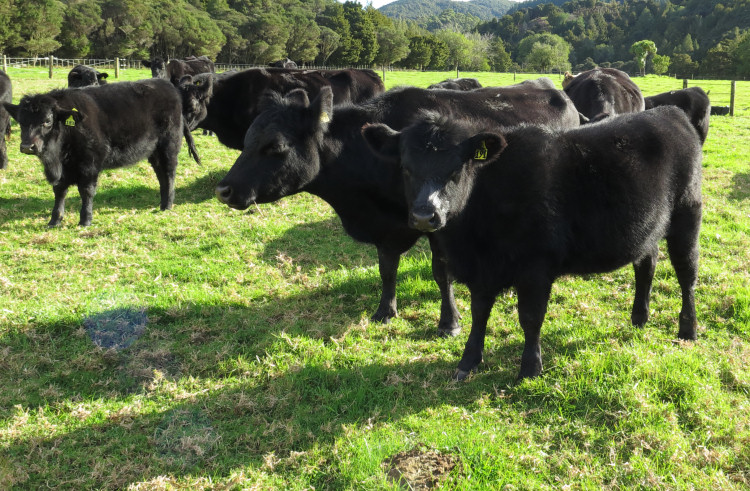 All these calves must be around 300kg or more now.  They should continue to do well through the rest of winter, with such a sound start. 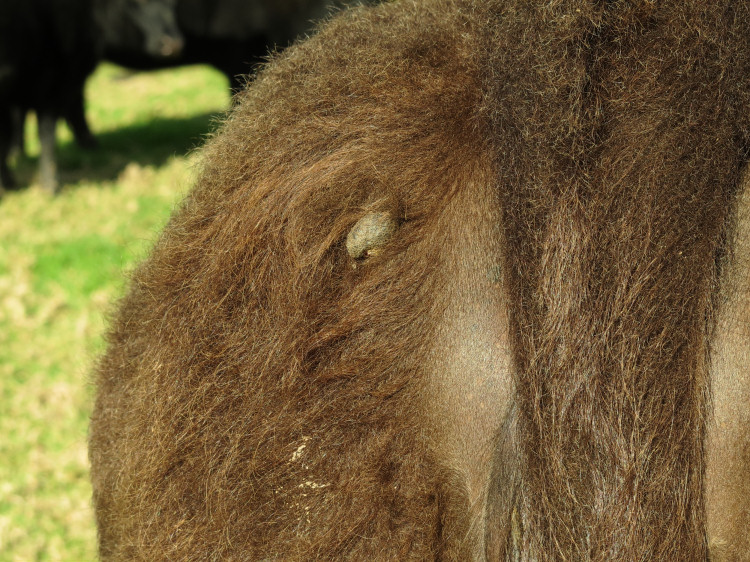 812's weird wart thing may be shrinking a little.  I've been sloshing Iodine on it whenever I see her, since I'm now carrying a little bottle of it with me all the time for the troughs.