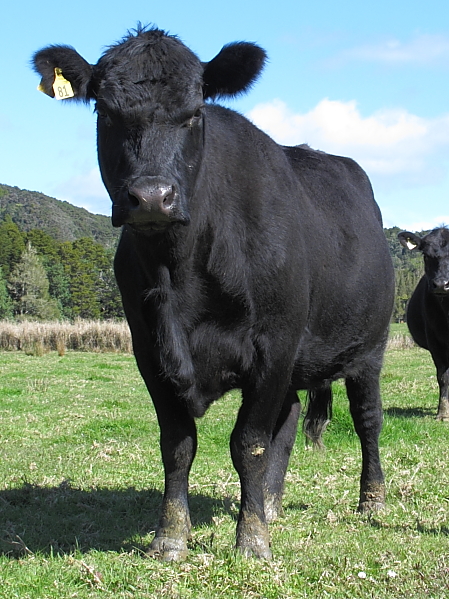 On Wednesday, 20 May, we gently euthanised beautiful Eva.

She was injured in the spring by her then paddock-mate Zella and subsequently, possibly due to mismanagement on my part, that injury worsened. She became unable to bear weight on her right hind leg due to an obvious injury to her stifle joint and the vet diagnosed a probable hip dislocation as well.

We gave her pain relief for a while but it didn't seem to change her behaviour or activity level at all, so stopped annoying her with injections, keeping her and Andrew (her increasingly enormous calf) together in the best-growing paddock and bringing her daily treats of feed nuts and molasses, to keep her in good order but also to train Andrew to eat such feed in case we needed to end Eva's life before he was weaned.

Eva appeared content, despite whatever pain her leg caused her. She would never wait for me to bring her bin of treats, would always begin limping her way, quite quickly, in my direction. She moved widely around her paddock, which I presumed she would not have done had her leg caused unbearable pain.

But a cow cannot be allowed to go on forever with an unstable injury, especially when things get tougher during the winter. I decided that on the day her calf would be weaned, we would have the vet come. Eva need not endure the stress of weaning this time.

Early Wednesday afternoon I enticed Eva and her companions (daughter Dushi, the other young mother of a bull calf and the three calves) down the Windmill paddock to the yards and with Eva in the race, the vet injected a sedative into her rump and we let her out onto the adjacent grass. Over the next minutes I stayed at her head, keeping her from moving in any direction toward hard or sharp things so that when the sedative's effect overtook her ability to remain upright, she gently collapsed in a comfortable place. Her breathing had become increasingly like a light snore as her muscles slackened, and on the ground she tucked her head back around to her side, where I remained with her while the vet found her jugular vein, into which he injected the euthanasia drug. In a very short time Eva breathed her last.

On Thursday afternoon we buried Eva, next to her mother, Demelza, in our House paddock.