A short explanation for skipping forward three months: life is getting further and further ahead of my writing about it so, admitting defeat for the time being, here is some more current news. 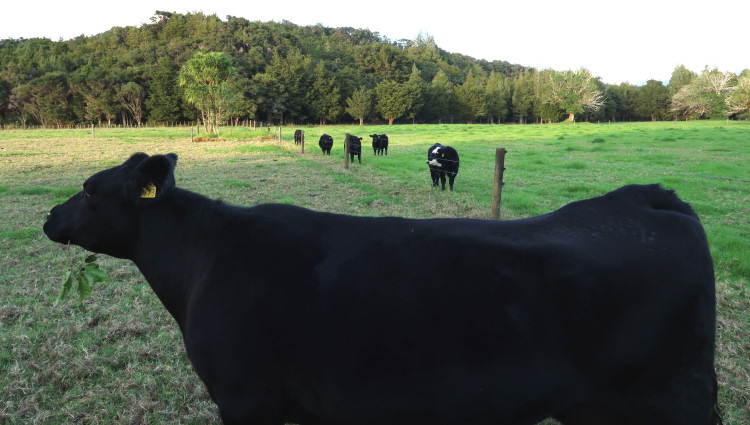 I began weaning the sale calves a couple of days ago, starting with six calves and their mothers.

The cow in the foreground chewing on a bit of Pūriri is 773, who has a very sore front foot and isn't moving easily down the paddock to the little strips of new grass I provide twice a day and back up to the trough the cows are sharing with their calves.

When they were all in the yards the other day we put 773 in the head-bail and examined her foot, pulling a bit of muck out from between her toes, but couldn't see anything obviously wrong. Since then she's got sorer. 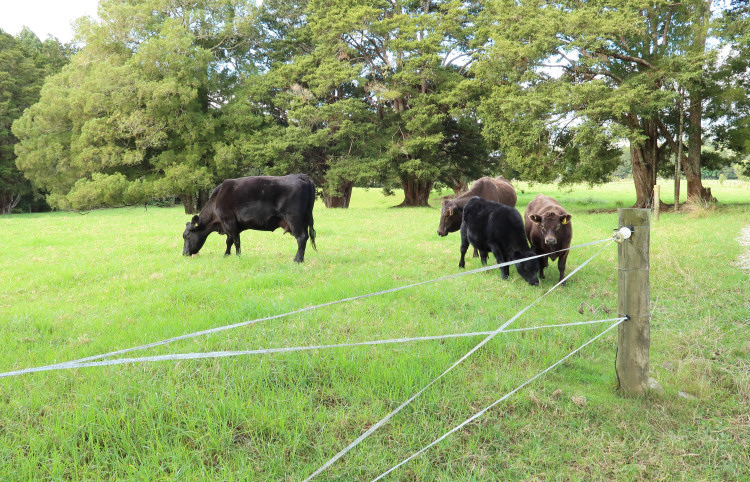 I put an electric tape around where 773 was sitting this afternoon and gave her some molasses and Magnesium, then propelled her out of the paddock and across the lane to the top of the Windmill paddock, where there's more readily-available grass, a nearby trough and the company of grey 812, young 183 and their two calves. 773 is senior to the other two cows, so they won't try and push her around. And she's still near enough to see and hear her calf across in Mushroom 1.

I spent another evening processing Ballarat apples from the orchard, bottling them in Agee jars. I do three bottles at a time, since that's a large bowl of chopped fruit which fits well into the huge preserving pan and three Agee jars fit into the little bench-top oven for sterilising, which is a great deal more efficient than using the big oven. And after all that I need a sit-down anyway. 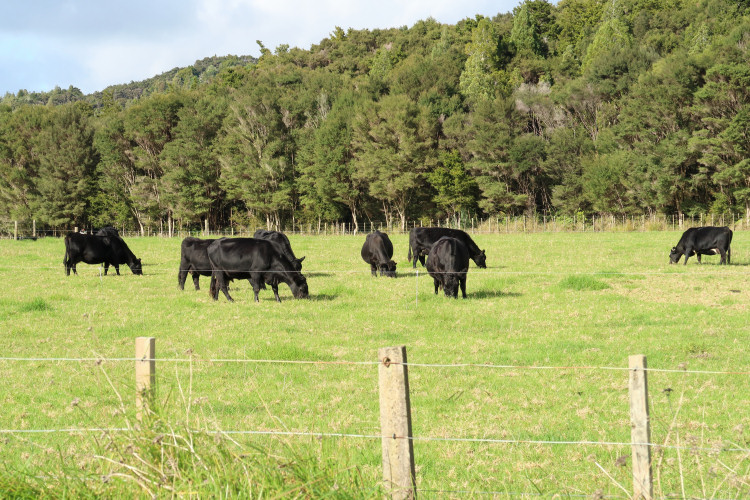 After taking 773 out of the mob, there are still nine cows in the first weaning group, because I included those without calves: Zoom, Fancy 186, 723 and Imogen 155, all of whom are now unnecessarily fat.

I've now taped them down the length of 5d so with the next shift they'll have access to the gate through to 5c. Once they're in there, I can bring the next weaning group into this paddock. 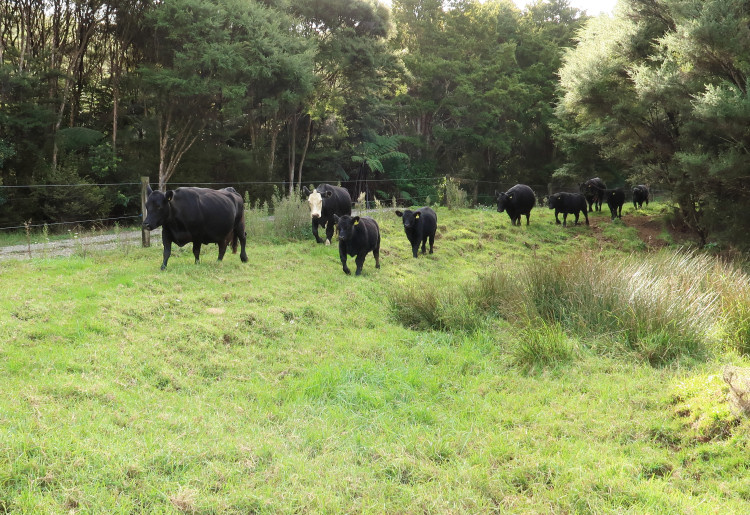 This will be the next weaning group, six pairs, separated from the main mob when we weaned the first group, so they'll be easy to draft for weaning in a day or two.

Here they were in the Swamp paddock, coming out to go around to the Bush Flat. 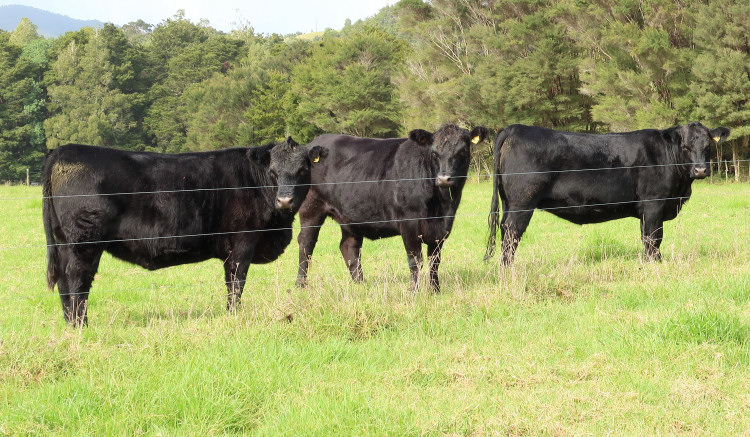 These three heifers were with the younger mob Over the Road but I've now booked them in to the works. There's still a three-week wait, I'm told and I hope it's no longer. 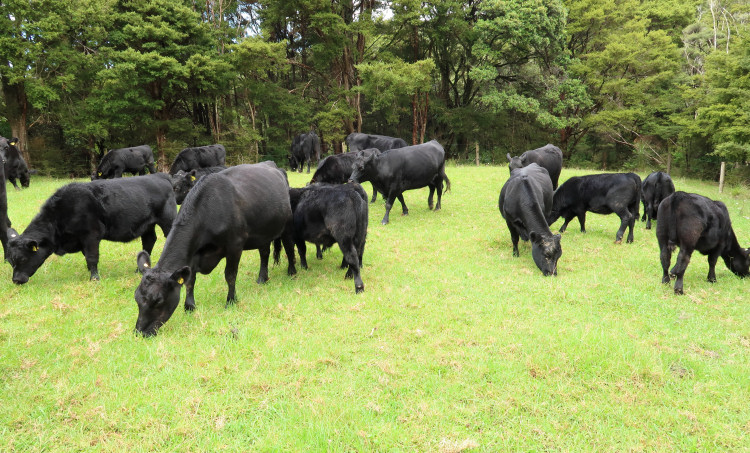 I walked out to move the main mob from the Spring paddock. I stopped them here, on their way to the lane through the Back Barn paddock, so that if any of the calves was slow coming across the stream, the others wouldn't all have disappeared along the lane by the time they got here.

I let them go and wandered along behind them, all the way around to the Big Back North.

813 was on heat and I watched bull calf 216 mounting her, with just a little bit of pink penis starting to show. He won't be fertile for a while yet but he's certainly keen to get on with his life's work. 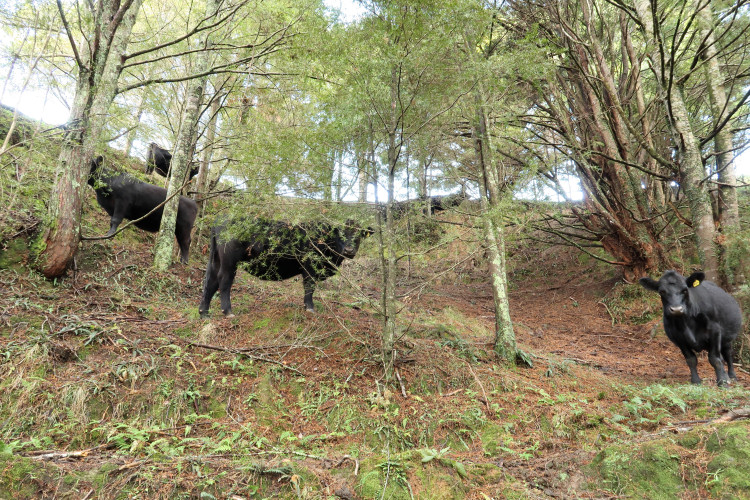 Then out the front and Over the Road to check on the young heifers, one of which was on heat and making an awful noise this morning. I think it was Gina 202, who was down by the trough with Zella's daughter, 919, who was probably coming on heat too.

The others were all up around the very steep slope through the gateway. This area is one of those old slumps, where water running from deep in the hillside gradually erodes the clay base and the soil above slumps down into the gap, creating a steep hillside above a swampy low area. In time we'll fence some of this off, so the cattle no longer have access to the wet places. There's no grass here but the cattle often sit or stand around in the shelter of the trees. I like thinking about the places they like to sit and try to accommodate those preferences when thinking about fencing alterations. 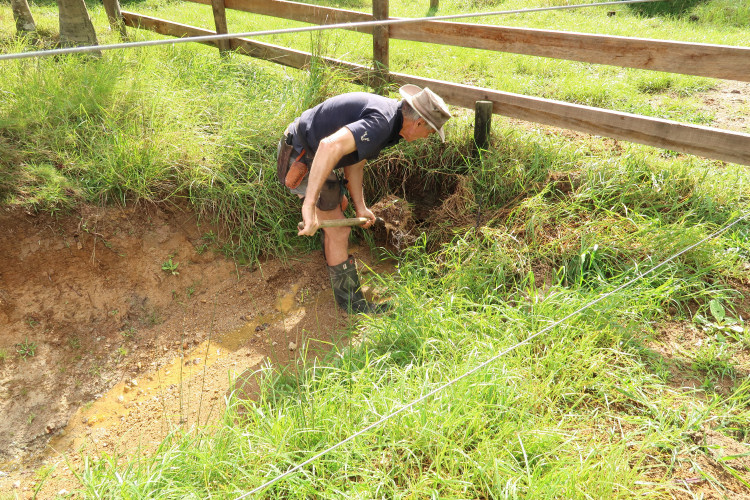 Stephan and his shovel came out with me this morning because I'd noticed that since an enormous down-pour a week ago, the new culverts had blocked, entirely or partially, with silt from the drainage works. It'll take a while for things to settle down. 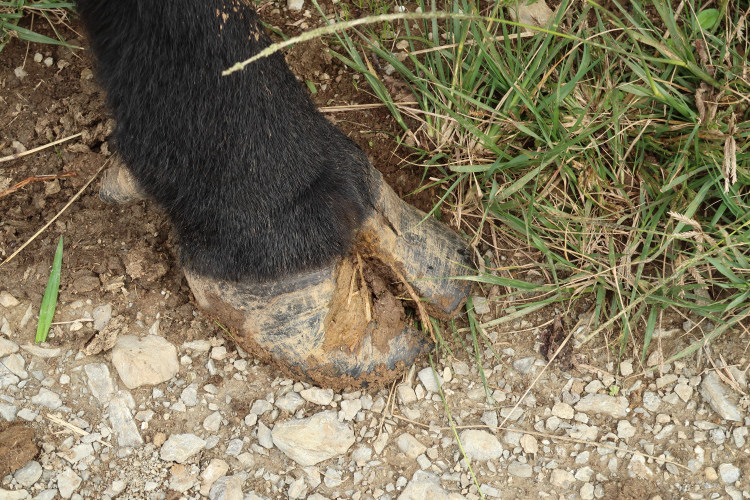 I noticed this crack in Gina 168's foot a few days ago. She has disappointing feet, I see now. They didn't look this horrible earlier in her life: the inside toe with the crack, is wider and flatter than the other and asymmetricality can't be good. I wonder whether the crack is injury-related or there's something missing in my cows' diets? I'm seeing a few too many foot problems at present. 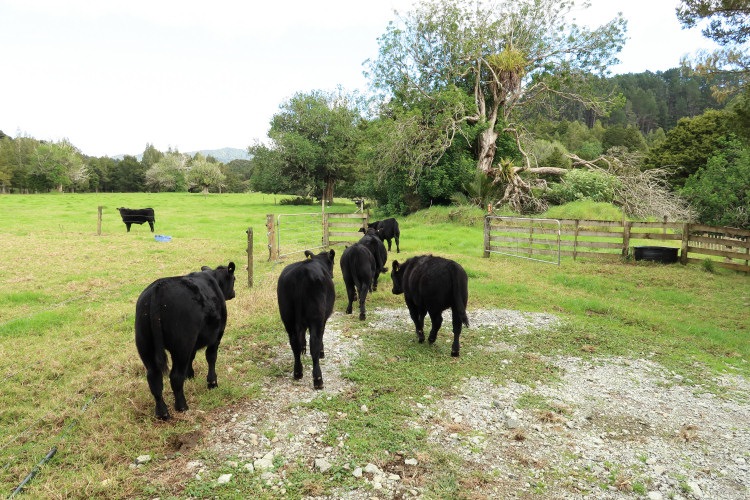 While Stephan carried on sorting out the culverts, I walked Gina and the other cows and calves of the second weaning group in to the top of the flats, then put the cows into 5d and the calves in with the others in Mushroom 1.

It's a really useful drafting area as the cows are always very cooperative about going through that steel gate to the left. I unlatch and open it and look at them and they walk up and through it and I can step in and stop their calves from going with them. The cows are always easier to work first, then the calves. The cows will walk closely past me where the calves will not. 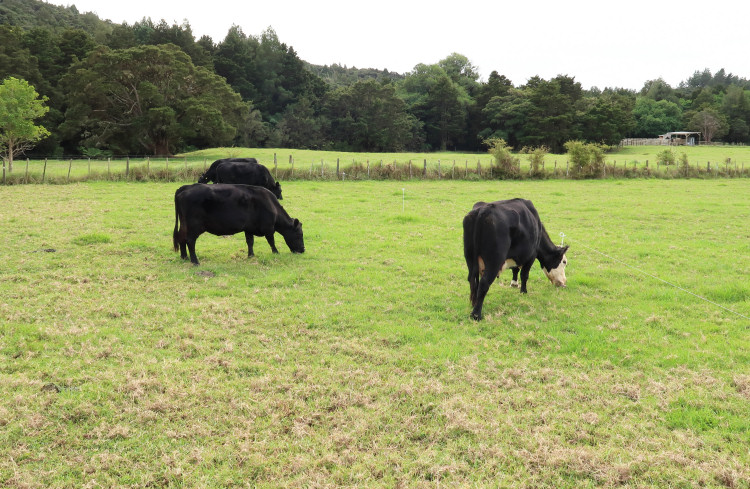 Out early to move tapes.

Here are some of that second group of cows. White-faced 746 spends half the time on her knees grazing under the electric tape, as usual. Funny cow. 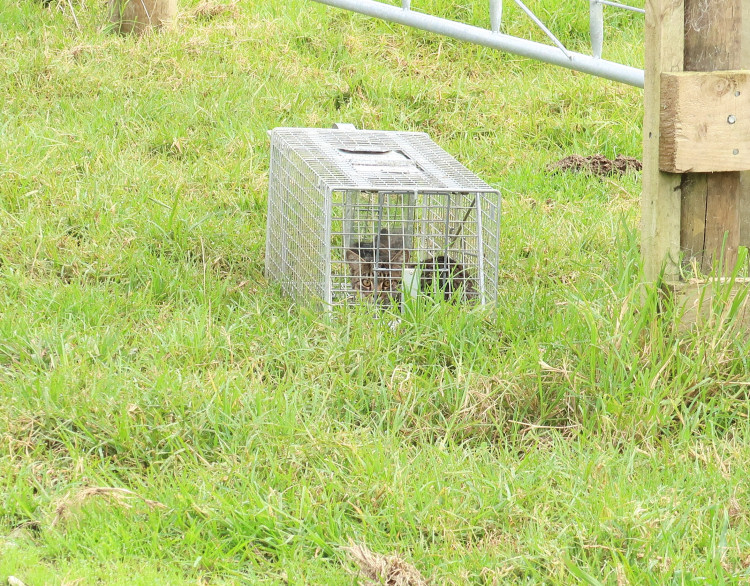 On my way back I checked on the magpie trap: what a catch!

We've caught only a few magpies in the trap but it's been fantastic at catching possums, hedgehogs and, occasionally rabbits; now we can add a cat to the list.

I picked the trap up very gently, talking calmly to the terrified animal, took it home where Stephan set up the trap with one of the wooden live-capture traps so the cat could run through into the darker space, then he shot it.

I suspect this cat was dumped by someone out on the road, is unlikely to have been treated well during its early contact with humans, and would, for the many weeks since kittenhood, have had to fend for itself in an unfamiliar environment. 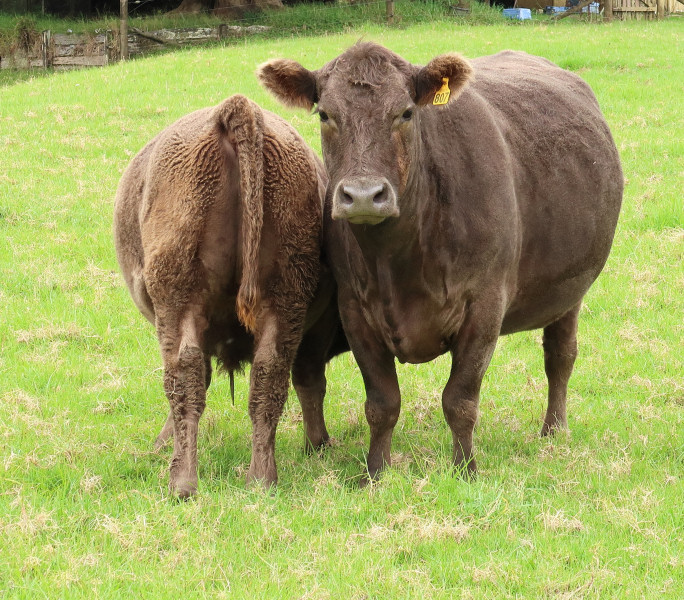 Glia's calf has never been small.

He's now just over six months old and a week ago weighed 312kg.

I have decided that in light of the very close relationship between this monster calf and little Zita, I won't wean and sell him with the other steers, he can stay with his mother until Zita is due to be weaned in a couple of months time. Cattle get really sad if a very close companion is removed and while separation is necessary in many cases (weaning calves from their mothers, for example), if it can be avoided, why not do that?

Zita would be very lonely on her own with her mother and Glia but it is the grey calf who has previously demonstrated significant distress when separated from his earlier companions.

Glia is so fat she'll not suffer from feeding her calf for longer than usual. 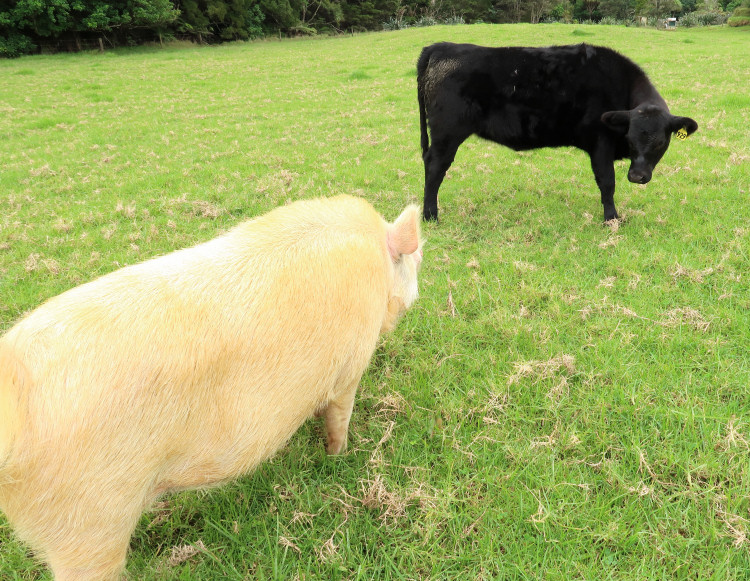 Little Zita has had squirty scours for the last couple of days and smells horrible. She appears healthy enough otherwise, except we think she might be sitting down a little more than usual.

I went to have a look at her and Al came too. This was not the first time they'd met but Al usually runs away from the calves, who often chase him for fun. 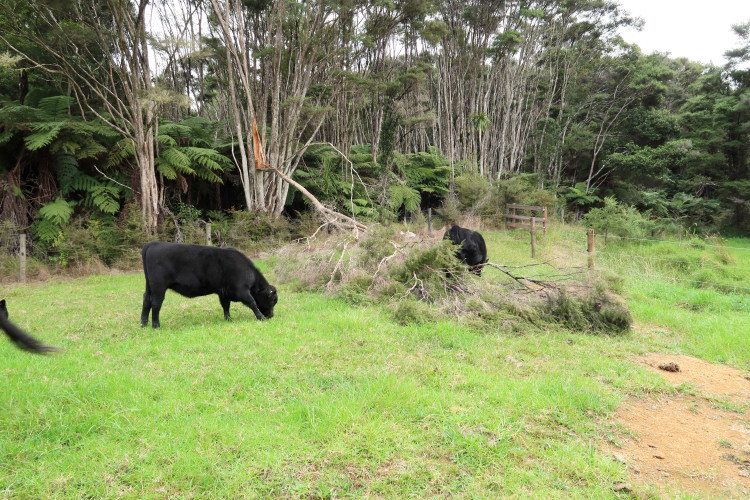 I moved the main mob from the Big Back North to the South paddock where this large piece of Kānuka had fallen down from the reserve side of the fence.

Calves really like walking through the tops of fallen trees and that's what 226 immediately did. It must be nicely scratchy under their bellies but I'm not sure that's why they do it the first time they encounter such a tree. 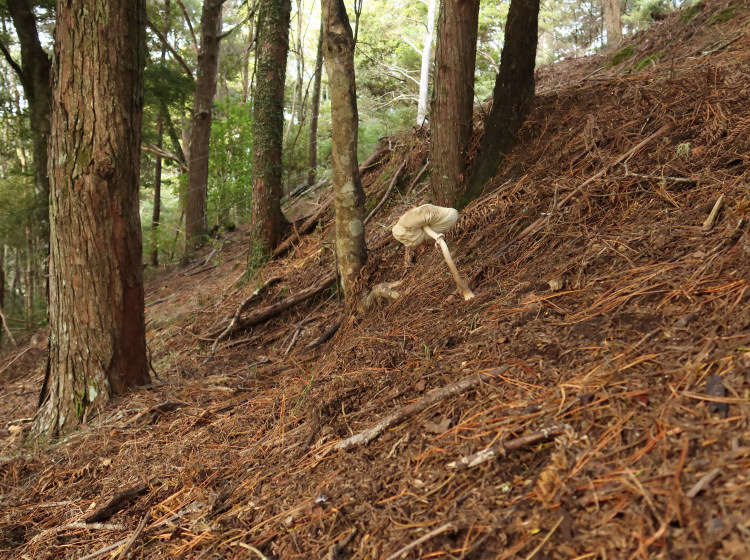 The heifers Over the Road needed to move from the smaller corner area to the big hillside. I opened the gates then went up the hill to check around the fencelines, make sure nothing had fallen down anywhere onto a fence.

Climbing up the steep slope beside the gully between the two paddocks, I saw this enormous toadstool. It was the only one in the area. 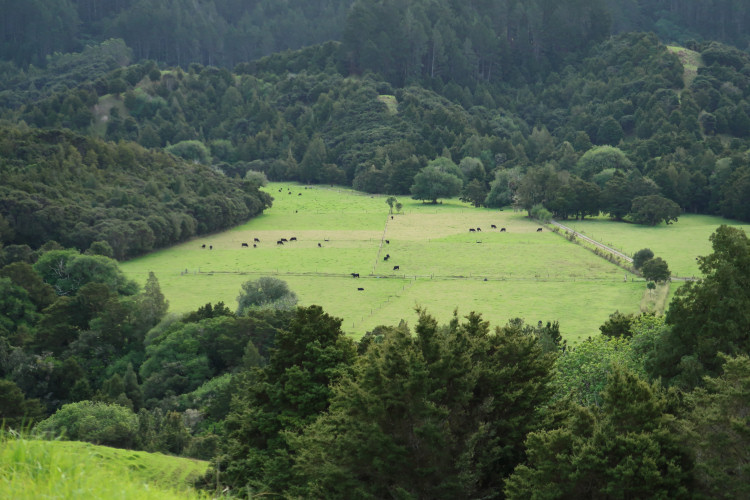 I love looking down at the farm from up here on a clear day.

The weaning calves are in the distance, their mothers in three mobs on the edges of the light-coloured grazed areas, and the others are the three works heifers and bull 189, then the two bulls at the top of Flat 3. 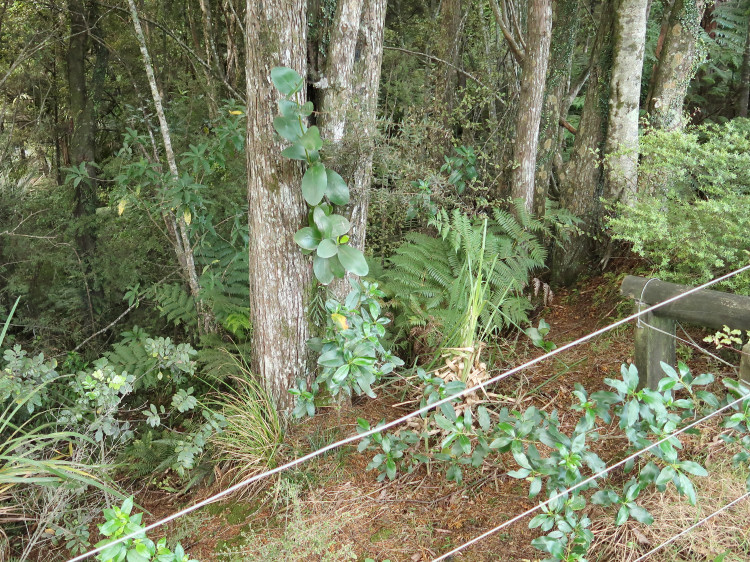 The big, dark, glossy leaves in the centre of the photo are a Puka I photographed as a tiny plant growing in that Tōtara, six years ago. 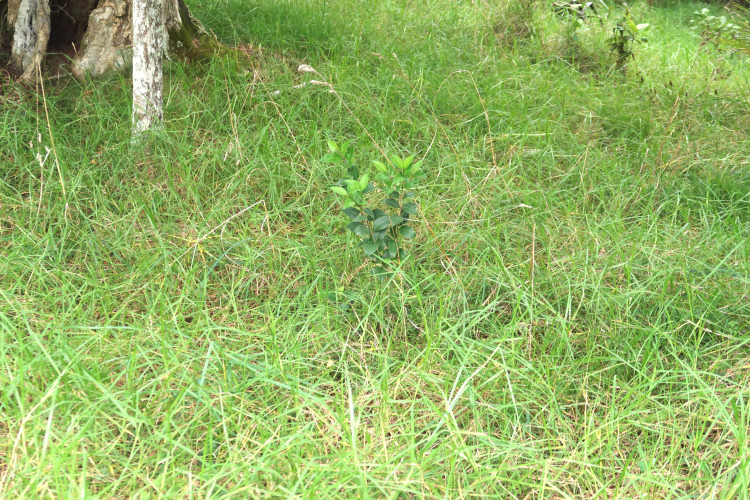 That little sapling is a Privet and this is my way of remembering to tell Stephan it is here, so next time we're up here doing weed tree patrol, we'll remember to kill it! 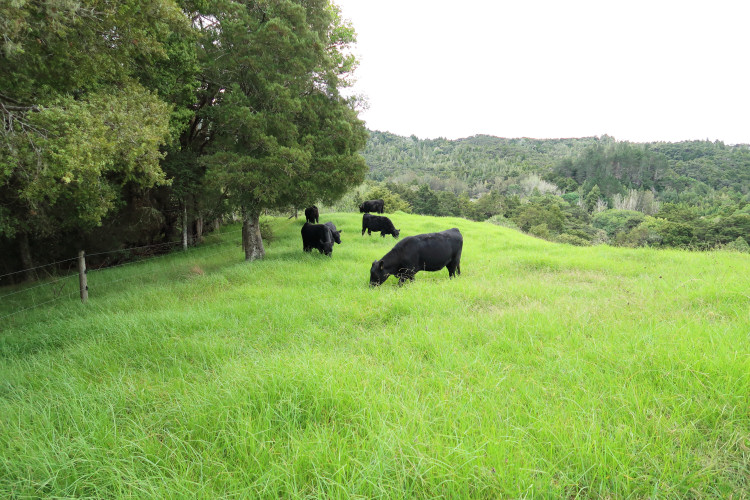 I think the heifers will be very happy up here for some time. 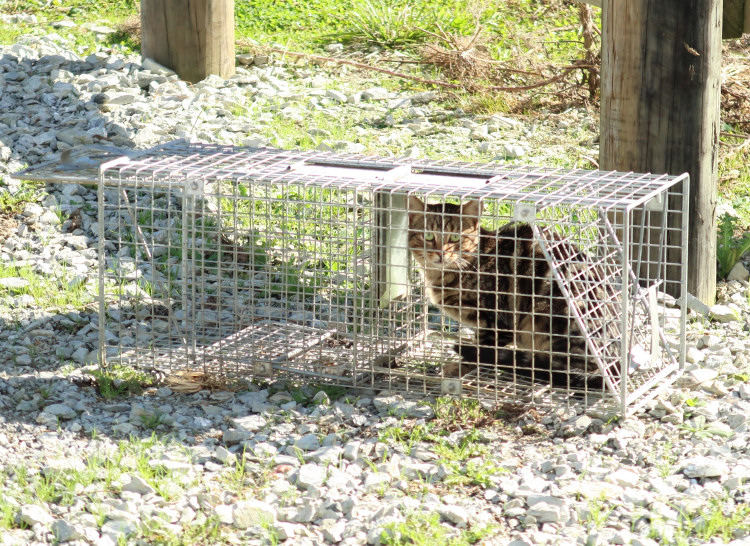 What a fantastic trap.

Presumably this is a sibling of the other cat caught in the same place, being about the same size.

I always feel so sorry for cats like this, born to cats whose owners never bothered to have them spayed, the kittens unwanted and then dumped on country roads without any care for their welfare. And then they still don't spay the mothers and the next lot of kittens will end up dumped as well. It is cruel and irresponsible. Domestic cats, for all that they sometimes ignore their own people and live their own supercilious lives, are social, beautiful creatures and if they're our pets, we must look after them.

These ones can't be made back into pets, they're too wild, and there are always too many kittens needing homes. De-sex your cats!