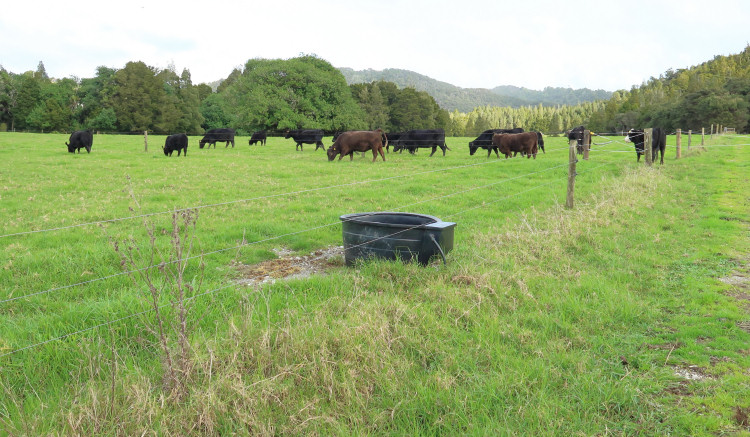 The oldest calves are now 8½ months old, and I'll have to think about weaning them soon; but at the moment there's still enough grass around for them to stay with their mothers for a few more days. 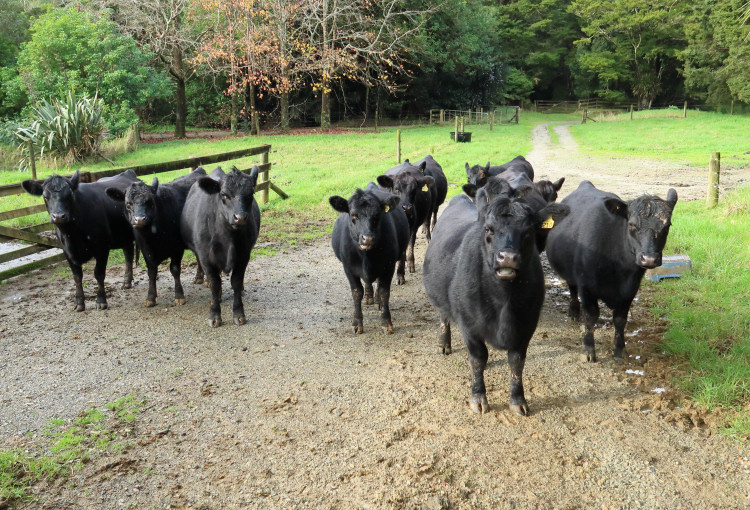 The young heifers have been Over the Road for the last couple of months and they could do with a change of scene.

They're a mixed bunch, a couple having grown exceptionally well; it's partly a matter of timing and it'll be interesting to look at them critically later in the year, when I decide who will join the breeding herd. 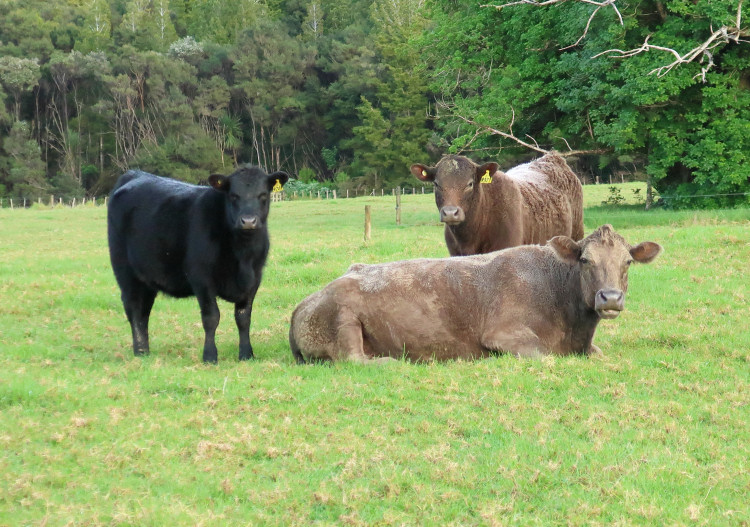 We were walking across the flats to go and move the heifers across the stream and passed Endberly, sitting contentedly in Flat 3 with her daughter and a friend. 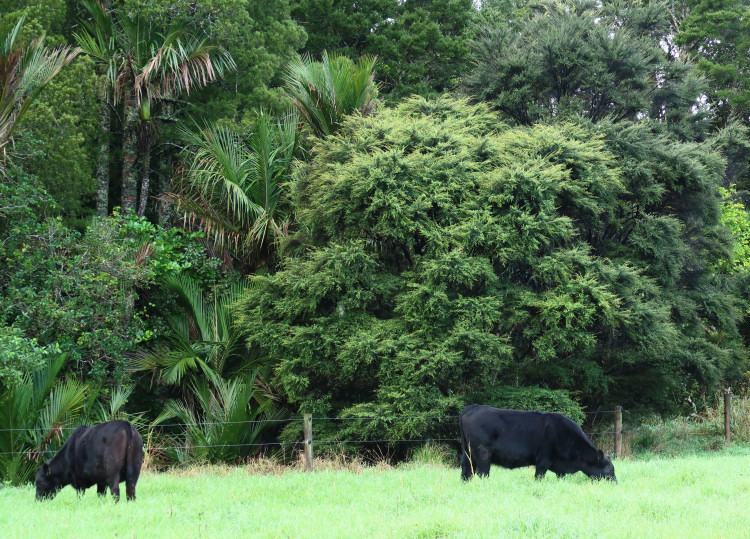 Once we'd moved the heifers to the Road Flat, we went for a walk around the edges of the paddock, to check that all was in order.

The foliage of a Kānuka in the stream-side reserve caught my eye.

The darker green behind it on the right is another Kānuka, but not catching the light so attractively. 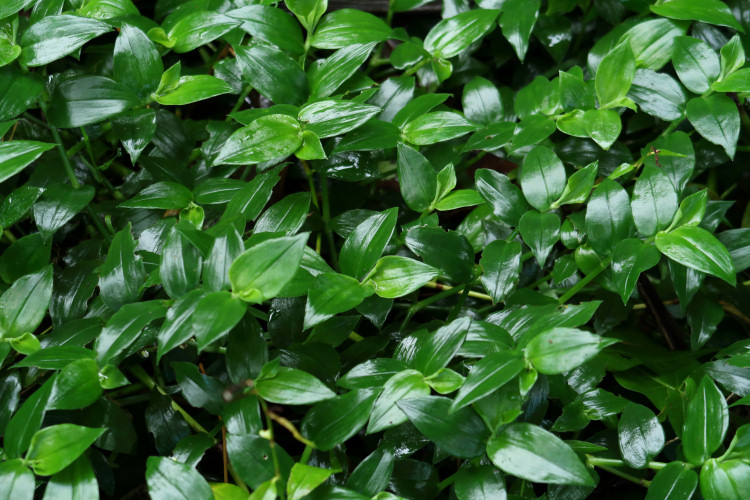 Beside the stream, a patch of exceptionally healthy-looking Tradescantia.

It looks like the bio-control beetles are only travelling downstream with the floods. We will have to help their spread.

We'll harvest a feed-bag of infected plants and bring them up here - or better yet, might take some up to the Buselich Reserve and put them in there. Actually, going even further up, to the source property, would be the best option. We'll see if we can arrange it. 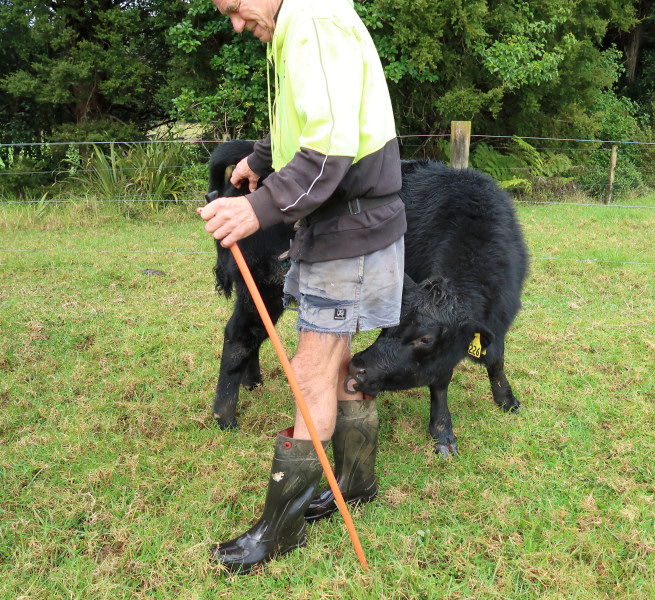 Walking home again, heifer calf 226 came to us for a scratch and as Stephan scratched around her tail, she licked the back of his leg.

Being licked by a calf or cow is very much like being licked by a very large cat: it hurts! They have similar-feeling tongues, with raspy hooks all over their surface. Presumably that aids the efficient harvesting of grass.

I could see all 11 of the heifers happily sitting or grazing across the stream today, so that was a sufficient check. 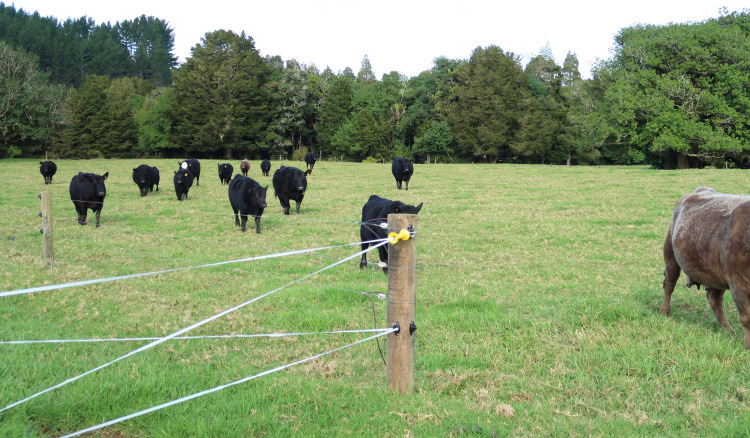 Then I moved the cows and calves from Flat 3 to the Blackberry paddock. Oh these new gates are fabulous. 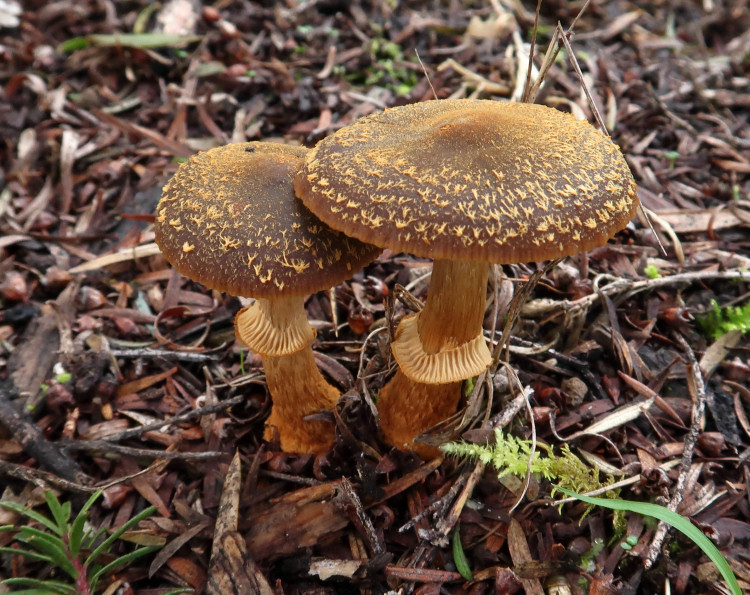 Aren't these the most beautiful toadstools? 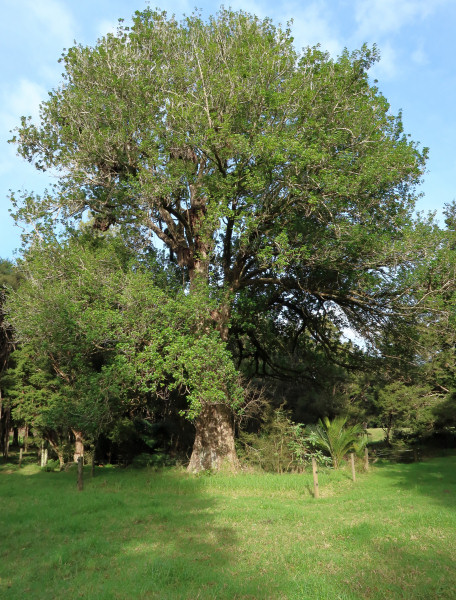 After shutting the cows and calves in their paddock, I walked back across the stream and through the Swamp East Left and admired the huge Pūriri by the stream. 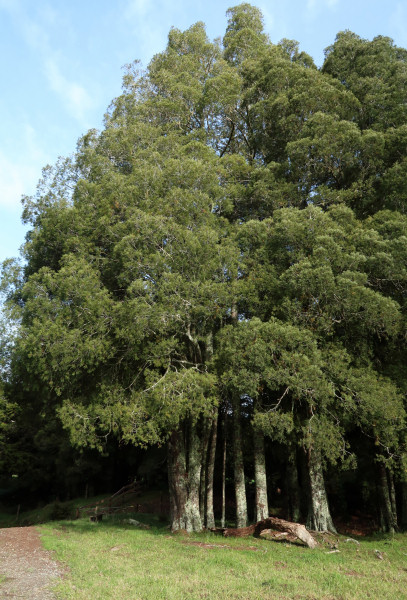 Coming back along the bottom of the Pines paddock, I was struck by a realisation: I can't remember seeing any Kahikatea berries this year. They usually fruit in early Autumn.

I can't easily check if there have been other non-fruiting years since I don't reliably record them; but I will from now on. No Kahikatea fruit feels as significant as the Kikuyu grass flowering out of season. 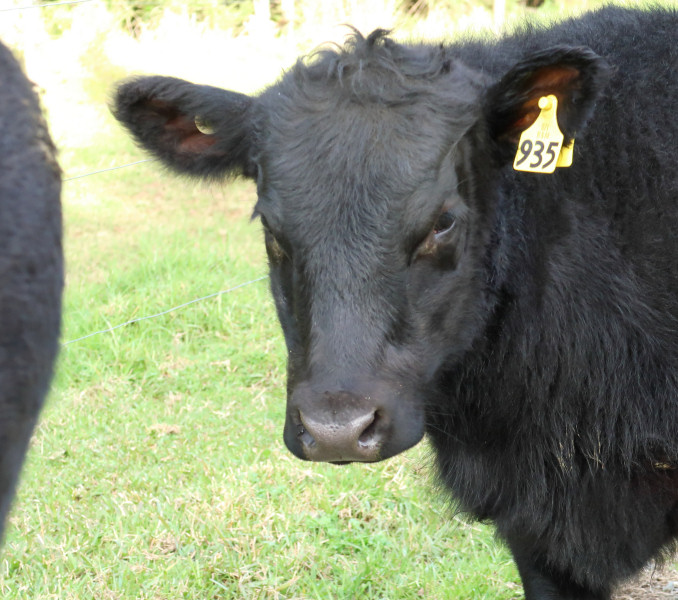 935 has a distinctive facial hair pattern.

There have been a few calves like this; there'll be photos somewhere. I wonder if they've been closely related?

I suppose I could add profile pictures to my pedigree tables! That'd be fun. But it's the sort of thing that will have to wait until I've filled in all the weekly page gaps in the site, of which there are far too many. 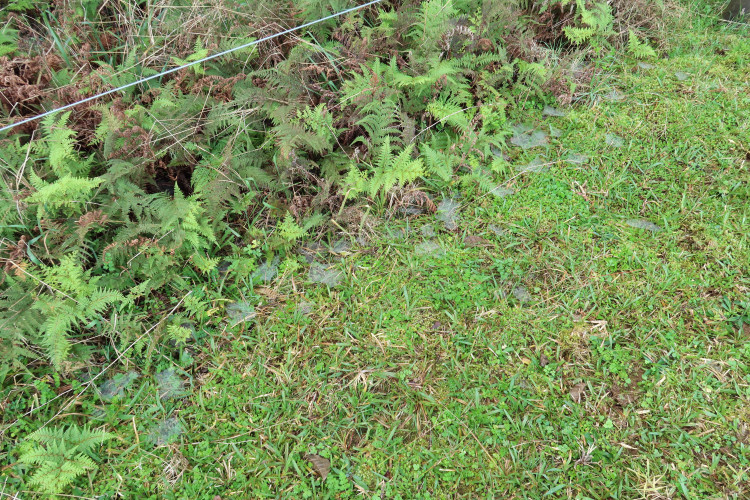 Look at all these spider webs low in the grass. 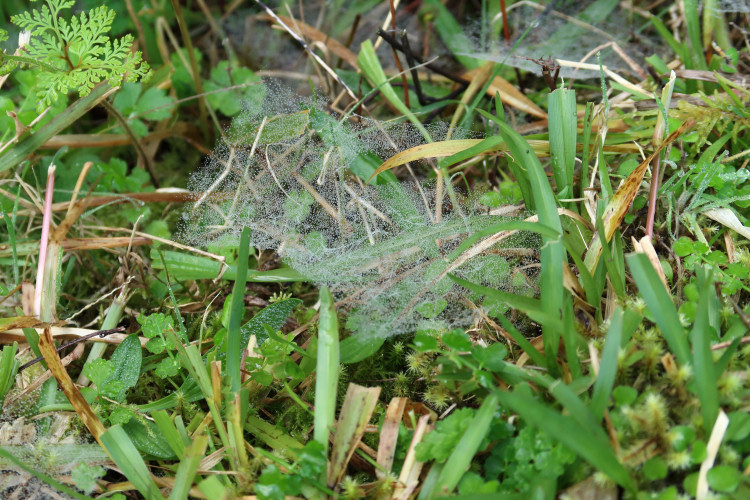 The day was cold, with a maximum temperature of only 11.5°C, which is unusually low here. It was also, as is quite usual, very humid, so water vapour had condensed on the little spider webs in a most attractive manner. 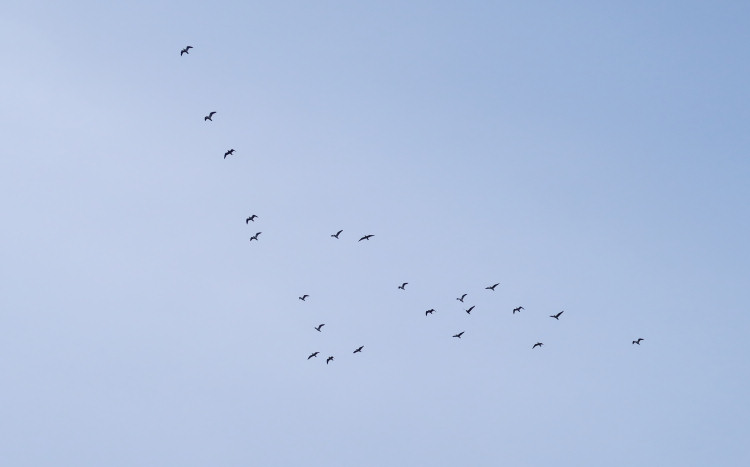 Walking across the Bush Flat after checking the four bulls, a string of gulls flew past. I counted 57 of them. 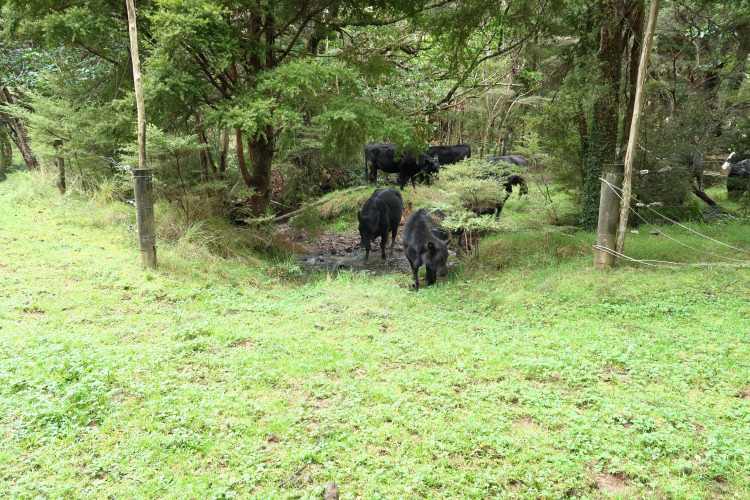 The day began as yesterday, grey and cold.

I went out to move the cows and calves across the stream from the Blackberry to the Swamp East Left.

The area directly across the stream in the picture is within the fenced reserve, so the cows always grab as many bites of grass as they can on their way through. Calf 935 led the way up and out into the new paddock.

On my way home I found Stephan preparing to load some of the logs to take them in to the mill.

The green saplings in the foreground are the Pūriri I'm watching grow. Over the years I've sometimes worried about having planted seedlings too close to each other near the pond, but when you see how close they often grow with each other naturally, it seems there is no such thing as "too close", although as big trees, there might be significant competition for light and nutrients. 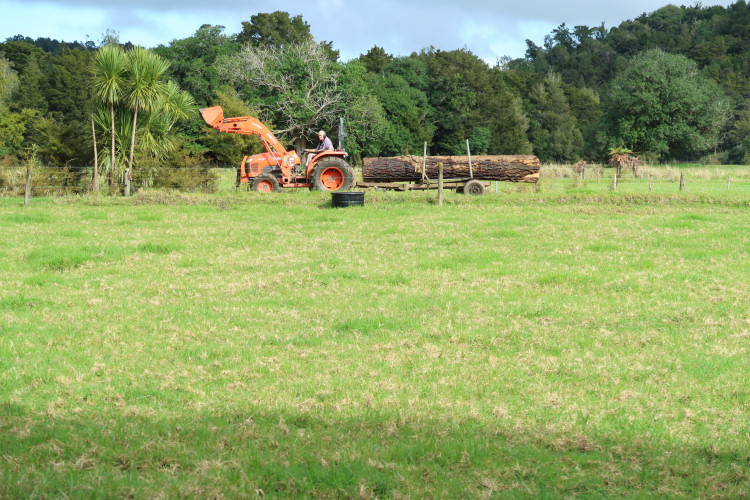 An hour and a half later, Stephan appeared with a huge log on the trailer. This is the biggest piece from the two trees he cut last week. 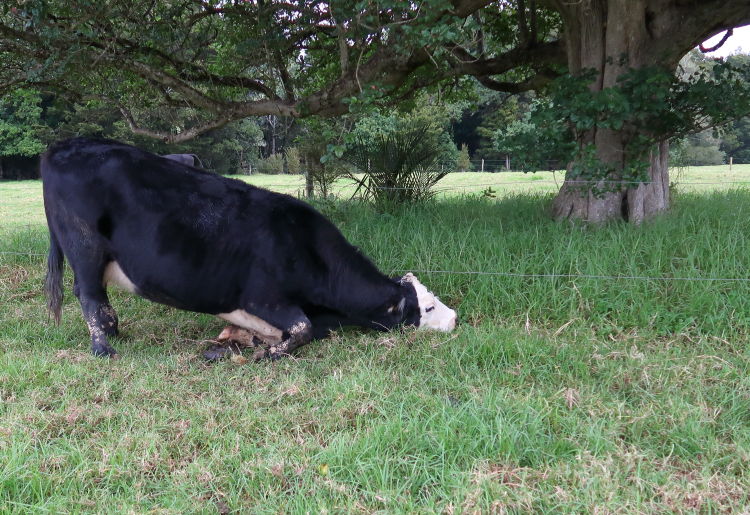 I'd just moved the 23 weaned cows from hard-grazing the top of Flat 1 and in Flat 3, 746 immediately set to work on the long grass in one of the tree reserves.

I watched her as she moved along the fence, sometimes getting up on her feet, and between those larger shifts, shuffling along on her front knees. She knows exactly where the electric wire is above her neck and how far in she can reach without getting a shock from the fence.

Stephan went off to town to collect some supplies. We still do all our shopping from outside, click-and-collect at the supermarket, phone and arrange purchases at the rural supplies stores, whose staff then bring stuff out when we get there. They're probably pleased that not everyone wants to go inside.

Jane phoned this morning, said she had a cat in one of her live-capture traps. Stephan went and shot it, brought it back and called me out to look at it. I won't show you the photo (but it may be available on request) because it was gross: the cat was covered in round lumps, as if there were pea-sized things under its skin. They were all over its face, legs, paws and one teste was markedly larger than the other. It must surely have been feeling horribly unwell. Not any more. 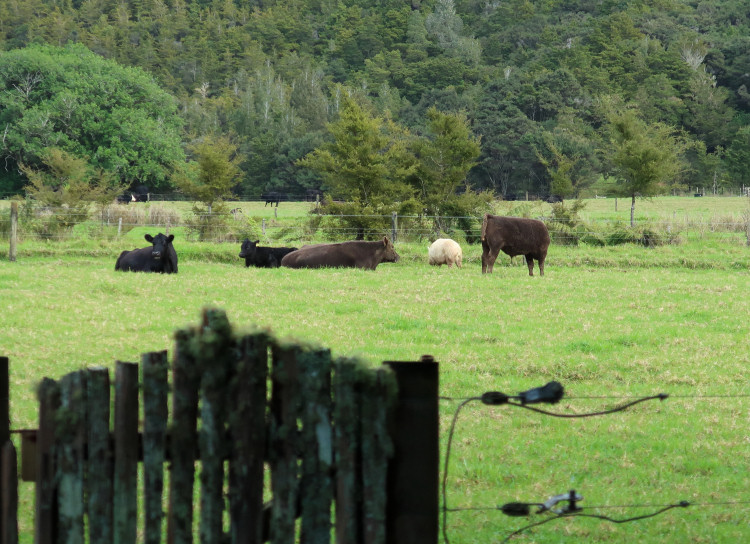 Al seems to enjoy being around the cattle and Glia, Zella and their calves have become quite used to his presence. 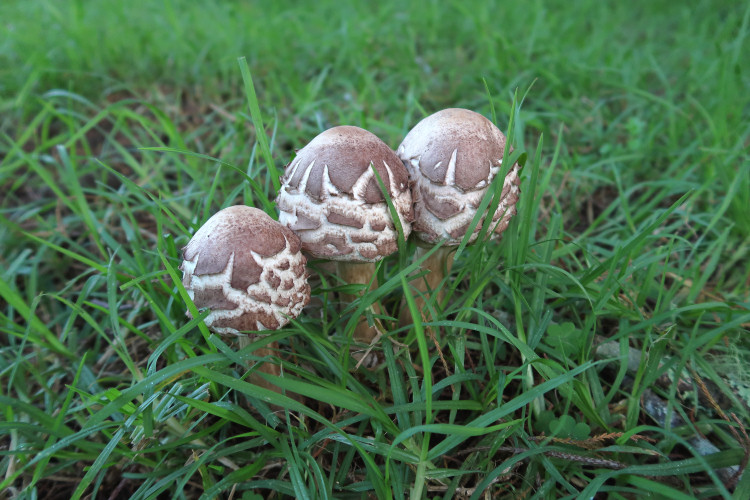 These are some younger versions of the fancy toadstools I photographed last week. 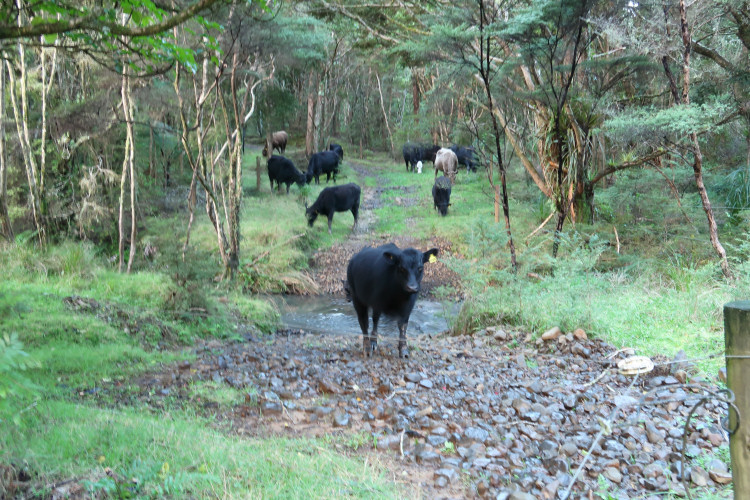 Moving the calves and cows again late this afternoon, I noted that 935 was again the first animal across the stream.

I was going to wean them this evening but it's cold and there'll be more rain and I hate making them miserable when the weather is awful as well. 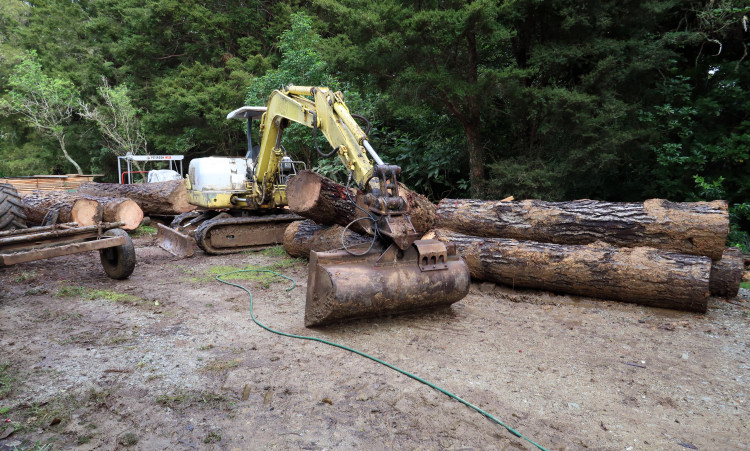 All of the logs from the latest two trees are now in, ready for milling. They're very muddy, so will need to be water-blasted clean. 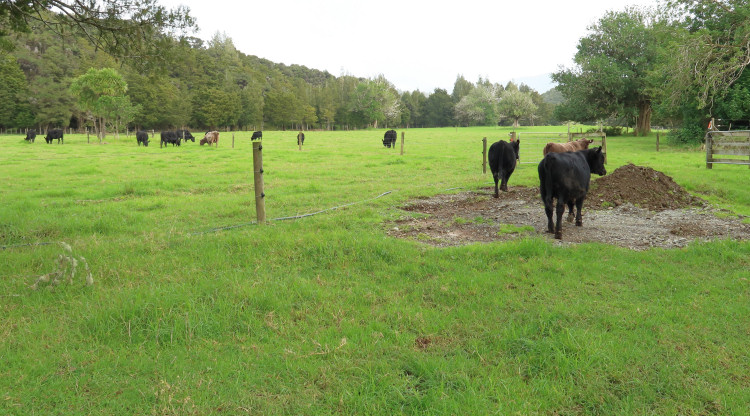 Before lunch I went out and let the cows and calves out of the Windmill, drafted the cows into 5d and the calves into Mushroom 1 with the two R3 pregnant heifers.

I'm hoping that keeping the two older animals with the calves will help the calves settle without their mothers.

After they've had a couple of days of restricted feed to help them adjust to not making milk, I'll have to feed the pregnant young cows as well as I can, to put some condition back on them again before calving. It's a hard thing to do at this time of year, but I'll do my best.

Do you think I should give a special prize to that clever animal grazing on top of the fence-post? 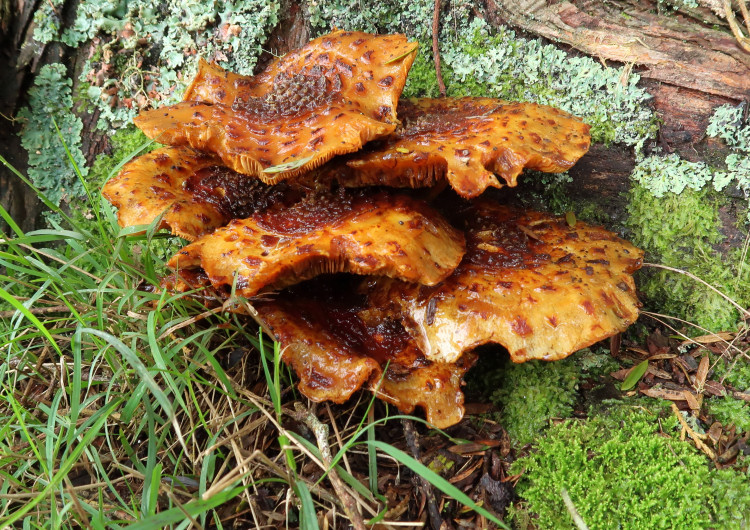 Over by the wooden gate was this group of fungi, growing out of the bottom of one of the Tōtara. 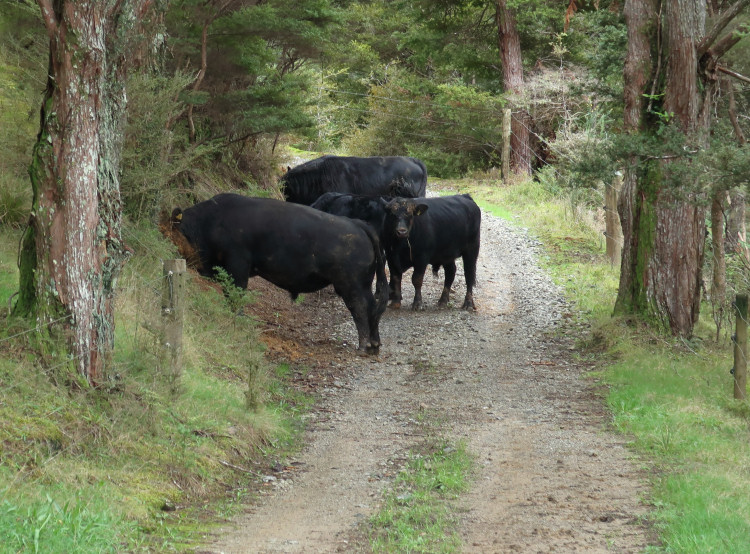 Then I moved the bulls, from the Bush Flat to the Back Barn.

They're an interesting group. I watched 201, the larger of the two 18 month old (R2) bulls, regularly trying to engage the others in head-to-head tussles. He's markedly bigger than 203, his contemporary, so those pushing competitions didn't last long; little 216 tried to stay out of the way of the bigger bulls and big, quiet 200 just walked away from 201 and, being so much bigger than him, could simply ignore him. Being senior, he probably displayed some other subtle signals telling the younger bull to leave him alone. Mostly it looked like size: he just walked on through whatever 201 did to try and engage him.

They're a delight to move because of the big bull's quiet leadership.