There are a couple of paddocks on the farm which are a bit difficult to graze at this time of the year.  In the case of the first flat paddock here, it's because the one trough in the paddock is at the western end, and all the trees for shade and shelter are at the eastern end.  That means that to strip-graze the paddock with electric tapes, I have to make sure the weather is neither too nasty, nor too nice, because in heavy rain and wind, the cattle would prefer to find shelter in the trees, and in the hottest sunshine, they must be able to find shade.

To get around that problem, the obvious solution is to install another trough, which this morning we did. 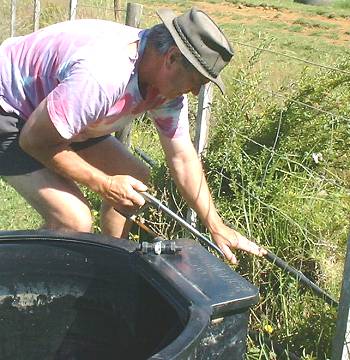 We bought a number of new plastic troughs a couple of years ago and this one has been the "floating" one, i.e. the trough we took to paddocks for temporary use and in one instance, literally the floating trough - during a flood which came up and over the banks and began taking anything not weighted down with it!

As soon as the cattle had water down at the shaded end of the paddock, I moved them out of the other end and down the lanes.

One of the bulls (Lendrich 05) is booked to go to the works, since I no longer wish to use him in the herd.  It suddenly occurred to us that we couldn't actually get any animal onto a truck right now, because we have no race leading to the loading ramp, since the barn, which formed one side of it, has been removed!  Stephan has thus built a new pen and race... 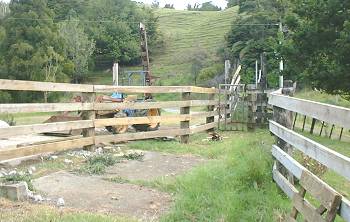 Stephan came back from finishing that job, very hot and tired, so the last thing he wanted to do was to come out and help me discipline some bad sheep, who had somehow left their paddock in favour of the one beyond, which has grass especially reserved for the insemination cows. 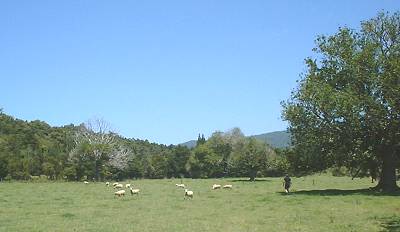 Running around in this sort of heat is not something we would choose to do, preferring to leave our physical activity until later in the day when the hottest period has passed.

It's lucky we don't rely on these young bulls for service, before they work out what they're really supposed to do! 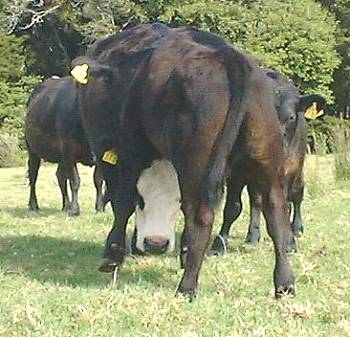 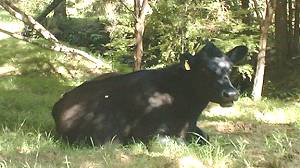 The hot weather is bearable, if you can find a nice cool, shaded and breezy place to relax. 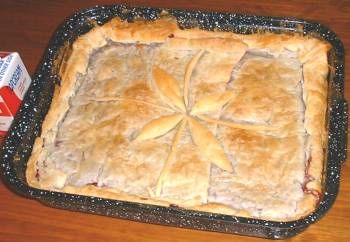 Seven blackberry pickers came to visit this afternoon and then their mother cooked us all a huge blackberry pie!

You may have gathered, if you are a regular visitor to this site, that Erika and Graham and their seven children, are regular visitors to our home and farm.  Having chosen not to have children ourselves, we really like it when other people's children come and enjoy themselves so much. 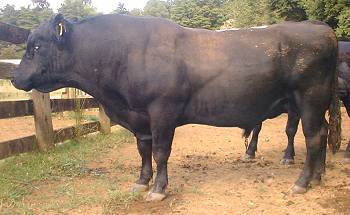 We've had the call from the trucking company telling us they're ready to pick up the bull and take him away.  Here he is, with our initials painted on his back for easy identification at the works and the health and treatments declaration all signed and ready, waiting for the truck to arrive.  His companion of the last couple of weeks has been waiting in the yards with him for company.

Finally, two or three hours late, the truck came and away he went. 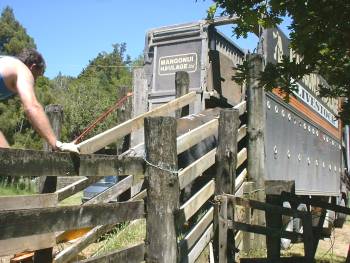