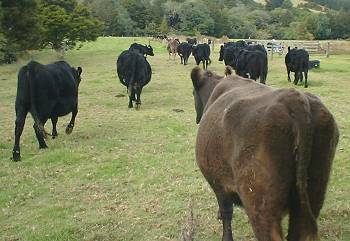 On most of the last few evenings, television news reports have shown pictures of farmers on Waiheke mustering their stock for FMD (Foot & Mouth Disease) monitoring - you may have seen them.  This is how it's done here: no dogs, no rush, little stress.  I opened the gate to the lane, with the gates ahead all set up ready for the cattle to go where I wanted them to, then called them and followed around behind the slower members of the herd.  I prefer it this way.

It's also best for the job I was about to do: coppering the cows.  Since the liver tests on the cull cows came back showing such marginal levels of copper storage, I knew I had to do the cows as soon as possible and today seemed like a good day.

We have rain, at last!  It started in the early hours, with a gentle fall of just 3mm, dampening things nicely, then it was fine for several hours, allowing us to get out and do what we wanted to.  Stephan went across the flats to build another fence around another Puriri tree - in a paddock I'm about to put the cows into, since it's the time of year they start eating the bark again - and I went off with what we call the plonker: the applicator which delivers a set quantity herbicidal granules to the middles of ragwort plants.  I'm gradually going around the farm after the cows have grazed the paddocks and walking back and forth, looking for ragwort.  The plants which are at rosette stage at this time of the year, are those first to flower at the beginning of the next season.  If I can find and eliminate them during this winter, we might have half of next season's battle already won!  By the time I'd run out of granules in the plonker, it was raining again and I was starting to get rather wet!  I went home and removed those things from about my person which needed to remain dry, like the radio and ear-phones, and went over to see how Stephan was getting on with the fence.  He finished one of the two fences and came home, completely soaked and cold!  The air temperature has been very warm, but it doesn't seem so when one is wet.

By this evening, we'd had another 12mm of rain which, if that's all we end up getting, is only a little more than the other two significant falls in the last four months.  MetService is still forecasting quite a bit of rain with the low pressure systems floating around on their way to us in the next few days, but we often have such forecasts, which then come to nothing.

Updating my rain records this morning, I note that our average rainfall to this time of the year is 623mm and we've currently only had 275mm, 44% of what is usual!  I'm often wishing for drought and it looks like this is it!  Things get a bit tight, but in our rainy valley we still get just enough to keep things ticking over.  Farming Kikuyu grass probably makes all the difference, of course.  Looking at the hills around our area, it's only where there's Kikuyu that there's any green at all: everything else is brown and crisp.  The up-side of the extended dry weather is our ability to carry on doing the work we want to in lovely mild temperatures (it's still a bit warmer than usual as well), without slipping and sliding around the farm when we try to go anywhere.

There's now another fence around the other Puriri in the paddock across the flats and I sowed the last of my annual rye seed this afternoon, in that same paddock, then let the cows in to do their part of the work.

Days of my life can escape me at times, unless I make note of what I was actually doing!  The weather has not been pleasant, so apart from trips out to check on animals, it's been inside work this week - I get to do the farm accounts and Stephan goes to his shed and "plays" with all his wood-working machinery. 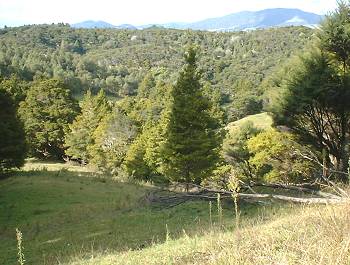 Stephan spent much of today out at the back of the farm, clearing part of the back boundary fence.  One of the little heifers got out through the floodgate again during the week, so he went to try and make that more secure again and having driven the tractor through a lot of face-slapping prickly Totara, decided to do some serious pruning!

I went back to get more fuel for the chainsaw and some lunch for my worker and we sat in the sun and enjoyed the view.  We have some absolutely beautiful spots for sitting and enjoying the quiet, but seldom do so.  I sat in the almost silence (apart from the calls of a Tui and the sound of the breeze in the trees) and thought how fortunate we are, to live in the midst of such quiet, when so much of the world is full of noise. 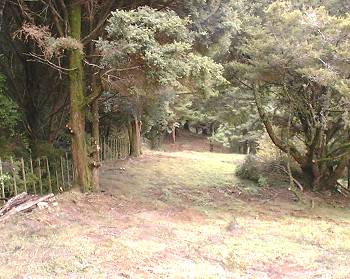 This picture shows our back boundary fence, looking down the hill to the extreme corner of the property.  Before the pruning, it wasn't possible to see much other than a lot of trees.

Leaving Stephan to carry on clearing, I went off down the hill with my weed-wiper and attacked rushes and sedge plants.  I've been intending to get out to the back to deal to the sedge for ages and it has in the mean time been spreading!  It'll be quite a job, but putting it off will only make it a bigger one. 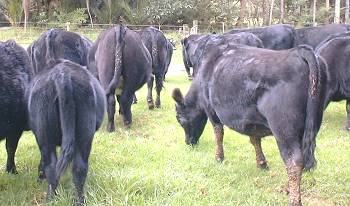 The weather being fine, I brought the young stock in from the Big Back paddock to the yards, to inject them all with the copper supplement.

I'm quite pleased with the state of them at the moment: they're going into winter in very good order.  This mob is still the mix of weaners, pregnant yearlings (now Rising two-year-olds) and the R3 heifers. 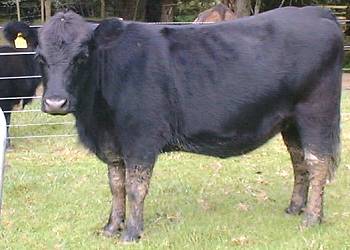 Standing in the wrong place, just waiting to have her picture taken?  This is 418, the R3 daughter of 348 and Quadrille.  I like her a lot, since she's showing much of the solidity of her sire, as well as his placid nature.  She has two parents with the potential to produce a daughter with a great deal of milk for her calves, so I hope that proves to be on the side of "enough", rather than "far too much".

The Foot Mouth Disease scare has proved to be a hoax.  Relief, not disease, is widespread!