We were invited out to a party over on the east coast, at Taipa, so decided we'd go and have dinner at the Pamir Restaurant.  The last time we went there, we were living in a "house" on the edge of the bush, with no electricity, no lining, no decent road access and nobody to see.  At the restaurant we sat in the near dark, with nobody else there, eating mediocre food and thinking we'd as well not have bothered to go out!  This time was completely different, the restaurant under new management again, was much more the lovely venue it used to be.

The Restaurant was started in about 1968 as an adjunct to the Pamir Motel, which had been begun by my grand father.  My parents, Jill and Brian Renner, set up the Restaurant and gained a great reputation throughout the north, bringing people from as far afield as Whangarei, to dine on Cordon Bleu cuisine.

Some of the photographs which belonged to my Grandfather are still in the restaurant and the venue is very much the same in its structure, as when my family left there 30 years ago, so it's a bit of a trip down memory lane to go there now. 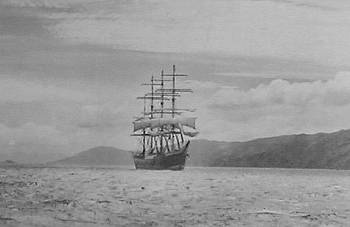 Part of the huge photograph which has been affixed to the walls of the Restaurant throughout its life - the Pamir in Wellington Harbour (at least I believe that's where it was!).

The current owners of the business suggest that its name may need to change, since the restaurant no longer has any real connection to the history of that name.  When the community was smaller and the restaurant drew more local patronage, the reason for the name was obvious, since people knew who had started it and the family connection to the ship, the history of which was also still known.  Times change.

Dinner on this occasion featured scallops for us both; for Stephan as an entree and for me as a main, as Scallops Thermidore, which I've not tried for years.  Stephan's main was a free range Lemon Chicken, which he very much enjoyed.  The wine list was quite extensive and the service friendly and efficient, despite the maitre d' being left on his own for the evening.  We were able to set our own pace for the meal, rather than being rushed through it, as has been our experience at some times in other venues.  We finished our meal by sharing a double chocolate dessert, released the top buttons of our trousers, and went off to party.

We had to go away for a few days, so the farm and its inhabitants continued without us.  We've finally had a decent amount of rain, in the midst of some very warm weather, so the grass is growing at an great rate, making leaving the animals for a couple of days a bit easier, since by the time they reach the corners of their paddocks, there's more grass there than when they were let in. 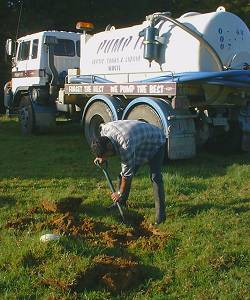 After a number of years, we realised it was probably time to get our septic tank emptied.  The tank sits beneath the ground at the back of the house and collects our bathroom and kitchen wastes.  Solids collect and the fluids are gradually filtered out through a system of underground gravel-filled drains, into the surrounding soil.  It's a system which has been used in rural areas for decades and works well enough most of the time.  I'm sure future generations will outlaw it as pollutive of the environment and dangerous to human health!

Ben in the picture, dug down to the lid in the top of the tank, through which he then put the large hose from the truck, and pumped out the tank's contents.

With only two of us living here, we don't need to go through this process very often.  The recommended frequency is every three years, to ensure the system works correctly.