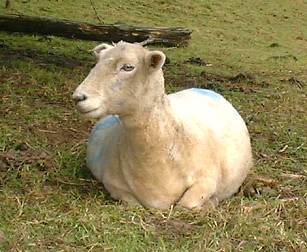 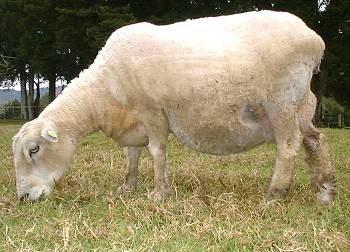 Matilda, lying down with her belly-full of lamb(s) bulging!  Yvette, the fat ewe pictured last week, who must surely be having more than one lamb this year!  For the last three years she's produced a huge single ram lamb, but you'd think a body this full would have more than one within.  We shall see. 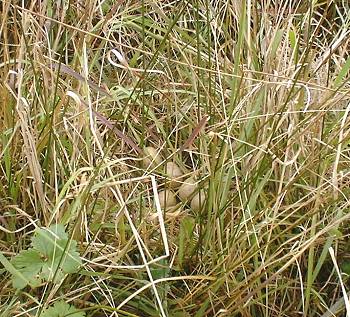 The Pukeko population has spent weeks courting and now there are groups, pairs and single birds all over the place, nesting.  I don't usually find the nests unless I go looking, but the owner of this one suddenly flapped up and out of the grass as I was closing a nearby gate, so I've been keeping an eye on progress.  She doesn't appear to have a watching partner or group of birds nearby, which may be why she didn't know I was there until the last minute.  Generally the birds will slink off through the grass before I get close enough to see where they've been, as the sentry birds warn of danger approaching.

We brought the 25 sheep in this afternoon and drafted out the seven yearling lambs from the flock and put the ewes into the house paddock, where there is grass and I can easily watch them over the next couple of weeks. 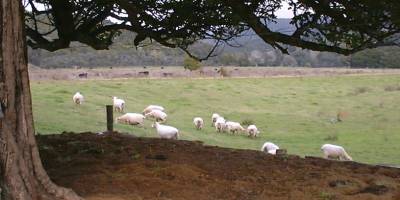 We weighed and drenched the lambs and then mustered the three sheep and Damian, who've been living together in the chicken paddock and drenched them too.  The eleven of them then mixed for a night's grazing in the driveway. 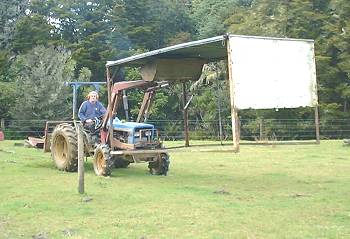 Because there's little shelter in the House Paddock from the coldest and prevailing winds, we thought we'd bring this unattractive and now redundant truck canopy into the paddock and anchor it to the ground where the sheep and lambs might use it. 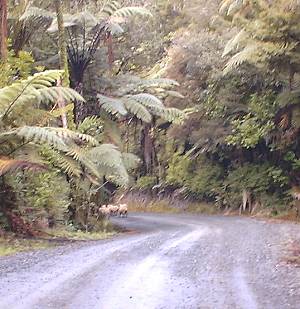 We went up the road to collect the lambs which have been grazing the paddock there.  It took a bit of trickery to get them out of the gateway and then, instead of quietly grazing the nice fresh grass on the roadside while one of us walked ahead of them up the road, they ran away!
We followed them with great trepidation, hoping if we went slowly they'd stick to the edges of the road, but wanting to move them as quickly as possible so they'd be off the road in the shortest time.  If a vehicle had come around any of the corners while we were there, we might have had a problem, but thankfully there was no traffic!  We had waited until the school bus (driven by a maniac speedster) had gone up and back down the road and while we were getting the sheep out of the paddock the mail delivery man had passed by and it wasn't quite time for people to be returning home from work.  Moving stock on the road without someone ahead of them to warn approaching traffic is illegal and dangerous and not something we do deliberately! 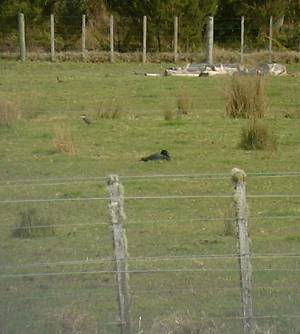 The Paradise ducks (Ms Duck's parents) have been engaged in family creation again.  The female has been sitting on her eggs for about the last two weeks, evidenced by the male sitting alone, like this, out on the flats away from the nest tree.  When the duck gets off her nest for a feed and a wash in the afternoon, they get together for a while, usually near our house where there's a patch of wet ground.  He seems to keep watch while she has a bath and puddles around in her hunt for food. 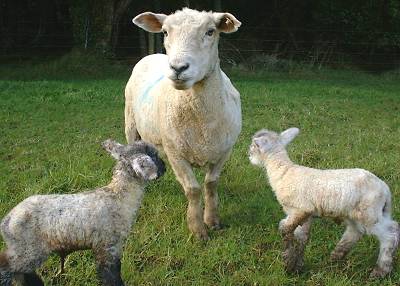 Our first lambs have arrived: twin ewes, to #16 who is Minty's daughter and this is her second lambing.  They were born at around 2pm, when I wasn't looking.  They've had iodine sprayed on their navels and I'm hoping they've had a good feed of colostrum, since the night is likely to be quite cold, after a fine day. 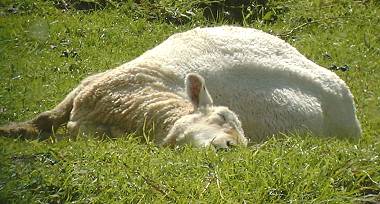 There are a lot of these around when the sun is shining: heavily pregnant ewes, snoozing in the warmth, since it's quite obviously costing them great effort to walk around grazing.

It's nearly time to begin the Isla Calving Date Competition again and I'm looking for inspiration in regard to the prize we will offer this year.  If you have any ideas, please email them to me!