We took the tractor half-way out to the back of the farm, partly to save me from walking the whole way and because there was a piece of tree we thought we might bring back with us.

We moved the young cattle into a hilly and scrub-covered paddock which they usually dislike, but in which there is a fair amount of grass, if they look for it.  The pregnant cows were in the next paddock, in a sunny and warm gulley, with still enough to keep them going for another few days.  I'd remembered to take some feed-nuts in my pocket, as treats for some of them - Isla in particular. 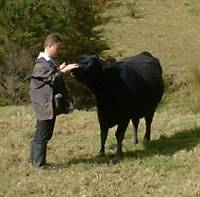 About three years ago, this tree fell down.  We didn't take much notice of it at the time, so identifying it now without its leaves was an interesting challenge.  It was growing in a stand of Totara, Kahikatea and Puriri.  From its bark and structure, we determined that it must have been a Northern Rata, Metrosideros robusta.  Looking for wood for Stephan to turn on the lathe, we decided to cut into it to see what the wood was like.  Stephan cut out a ring and rolled it back to the tractor and we took it home.  It is a wonderfully dark red-brown colour, very dense and not yet fully dry.  I counted over 190 annual rings, so it's been on this land for a great deal longer than any of us!

Rata is an interesting tree, in that it begins its life as an epiphyte in another tree, sending a slender root to the ground, with branch-roots which wrap around the tree, all of which eventually grow thick enough to be self-supporting when the host tree dies.  Rata grows on mature trees, is not parasitic, but presumably by the time it gains large maturity itself, there's some competition for light and nutrients, between it and the host, contributing to or hastening the death of the host tree. 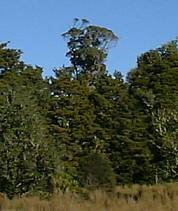 There are two other large Rata on the farm (that we've noticed or found so far).  One is still "hugging" part of the host tree's dead trunk and is a fairly young tree, having a fairly small crown.  The other is quite large, with a huge tripod-like base.  The top of the tree is visible here, above the surrounding Totara trees.
In the bush areas adjacent to our farm, there are some enormous Rata, usually just blending into the green of the surrounding bush, until they flower in the summer, suddenly standing out in all their red glory.

I brought the pregnant heifers in to the cattle yards to inject them with their copper supplement.  There were lots of pictures, but due to a systems failure, they've all disappeared.  The heifers and Ivy have gone over the road to our best hill paddock, which has missed most of the frost damage and has quite a bit of feed for the cattle.

This is Māori Language Week, an annual event to encourage the use of te reo Māori.  Māori is the language of the indigenous people of Aotearoa (New Zealand), is still spoken as a first language by many people, and learnt as a second language by some.  I am constantly surprised by the inability or disinclination by most non-Māori New Zealanders, to pronounce the words, names and concepts among which we live.  Even during this one week in the year, when one might imagine there being more effort made by those in the public eye - politicians, newsreaders, radio hosts and the like - I've heard some absolutely awful pronunciation of Māori words and names.

A related note: in Māori, plurals are indicated in the following way: the/a pukeko = te pukeko, or tetahi pukeko; many pukeko = nga pukeko, thus when using Māori words or names in English communication, one doesn't add an "s" as one would with most Engish words to indicate a plural.

We took a couple of short "holidays" to Kohukohu, on the Hokianga Harbour.

Kohukohu is a gorgeous wee village, with lovely views over the water.  Staying there for a night now and again, lets us behave in a more leisurely manner than we give ourselves permission to do at home.  It's only an hour away from us, with a third of the journey being over the Maungataniwha Range, with all its beautiful bush.  The more often we travel that road, the more I enjoy it.

Friday the 1st of August 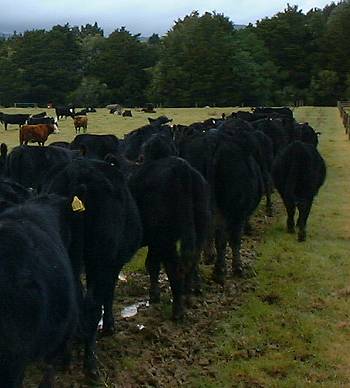 I brought the young cattle in to give them copper injections.

Yesterday afternoon we went out to the back of the farm to find them all and bring them a bit closer to the yards.  A steer and a heifer were missing from their mob, but we later found both with the cows.  The fence between the two paddocks is still not completely renovated and there are a couple of animals who know exactly how to get through or over the shaky bits.

The picture shows the young cattle moving down the lane, past the cows in our house paddock, who are giving it a very good clean-up before we leave it alone for a few weeks before the ewes will come in to start lambing close to the house.

After finishing my work with the young cattle, I drafted off the heifers I intend to breed from later this year, and sent them over the road to join the pregnant ones.  On a walk yesterday, I decided that there's a bit too much grass up there for the cattle in the paddock and I don't want the pregnant first-timers getting too fat before they calve.  The younger heifers could do with some extra feed to keep them growing in preparation for mating this summer.

The weather has warmed a little and there's sign of a bit of grass growth around the place, so we may have passed our lowest growth period.