The week beginning 30th of August, 2003.
ISLA'S CALVING DATE COMPETITION
See the bottom of this page for the entry form.
Saturday the 30th

The weather has been lovely during the last two days, so when everything had dried out from last night's dew, I set out to catch some lambs for docking, castrating and ear-tagging.

A little later I went back out to see that they were all alright.  Some were quite happy ... 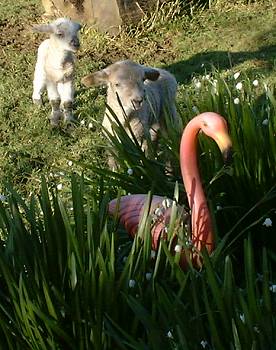 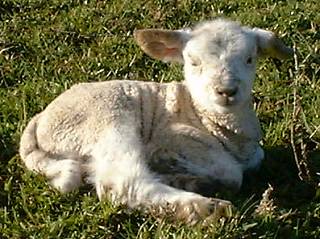 ... but one or two small babies were still sitting around, waiting for the discomfort to ease.

In the first week, we've had 16 lambs born to ten ewes.  We put 22 ewes to the ram, so we're doing quite nicely to be nearly half-way through lambing in the first week. What beautiful eyes!  This is Minty, of whom it is quite difficult to take a photograph at the moment, because she is convinced that, like the other day, I have a pocket full of feed-nuts for her to eat. 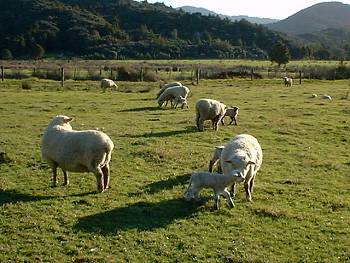 The other sheep just carried on with their afternoon lamb-gathering session - finding their lambs, calling them in for feeding, making sure all are accounted for.

Back at the house, the goose seems to be spending more and more time on her nest - actually it was a duck's nest first, but she's taken it over.  The goose has only laid about half a dozen eggs so far and we're eating them, because they won't be fertile, unless the Muscovy drake has managed to have his way with the her, of which I've seen little evidence. She gets off the nest again for long periods, so I don't think she's really ready to sit yet, but she's showing all the behaviours I would expect, like this insane tongue-poking hiss.  But really, what does she expect of me when she's decided to nest just where I walk so regularly.  I have also yet to prune the climbing rose underneath which she's sitting.  I doubt she'll be much impressed by my antics up a ladder!

There is a little bit of grass growth evident in some places, as the weather has begun (generally) to remain a little warmer.  Still not enough to keep these cattle happy all of the time, but they're obviously very pleased to be let into a new paddock to search out whatever is there.  This is one of the hillsides Stephan cut over a couple of winters ago, upon which the gorse is regenerating.  There is more grass here than previously and we're planning to do some serious gorse-killing over the summer. 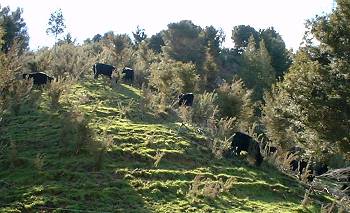 These are the pregnant cows in the foreground, and on the hill beyond the line of bush along the river and road, are the heifers, visible only as smudgy black dots in the distance.

The cows have had to work pretty hard to find enough to eat over the last few weeks.  We are now about three weeks from the expected beginning of calving, so I am gradually increasing their feed levels again (hoping that the grass will now keep on growing) so that they're in the best possible health when calving starts.  They'll need to be drenched for Liver Fluke in the next few days, since I'd like to have that done before the calves arrive.

Lambing has slowed this week, with the last single lamb born on Monday afternoon, nose first, but without my assistance - despite my best efforts to catch the ewe.  Both of us running around the paddock must have jiggled the lamb through the tight bits enough to be born successfully.  It was the ewe's third lambing, so not as tight a squeeze as it might have been in earlier years.

I've never before had to assist so many of the ewes during lambing.  It has been suggested to me that because the body size of the Suffolk breed is larger than that of the Romney, and because Suffolk lambs tend to have quite long legs, there just may not be the internal space in the ewes for the lambs to sort themselves out successfully before they begin emerging.  But so far, I've been on hand whenever it's been necessary and we've lost no animals and they're all bouncing around, whether assisted or not.

The only particular worry over the last few days, has been Lulu, who last week had begun to spend more time sitting down than standing eating.  On Saturday last, I saw her standing, head lowered, looking quite unhappy.  We're always on the look out for "sleepy sickness" (pregnancy toxaemia) which occurs in ewes who are (usually) carrying more than one lamb, and are not getting enough to eat in the latter part of their pregnancy, so their metabolism goes awry.  I moved Lulu immediately onto some lusher green pasture and continued to watch her.  She had a very sore front foot, which I trimmed and treated with some iodine, hoping to improve its condition.  I began to wonder, on watching Lulu closely for some hours, if she wasn't so much suffering metabolic collapse as simply being in pain with her foot, which was keeping her from moving around.  I took her maize and feed-nuts in small quantities, and gave her the occasional dose of water and molasses and encouraged her to move to a new patch of grass which she could nibble whilst lying on the ground.

It occurred to me on Monday morning that the foot infection might well have spread, so started Lulu on a course of penicillin.  She began to look a bit better during that day and by Wednesday morning was moving around almost normally again.  She appeared to be still some way off lambing, by the appearance of her udder.

Thursday the 4th of September

After a latish night last night, I crawled out of bed at dawn to have a quick look at the sheep and all seemed fine, so I took the cat with me to return for a warm lie-in.  Looking out the window on my way back to bed, I saw Lulu with dirty looking membranes hanging down between her back legs.  She didn't appear to be in labour.  Stephan and I prepared to go out and lie her down to assist her with whatever the problem was, expecting to find dead lambs within her.

To my great delight, I helped her deliver first a small and very lively ewe, then a larger ram lamb.  The ram required a bit of upside-down hanging therapy to empty his air passages of mucous, before he began breathing, but was also soon up on his feet. 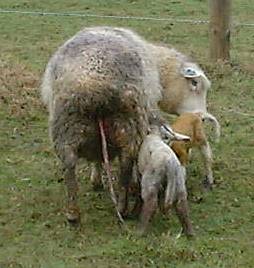 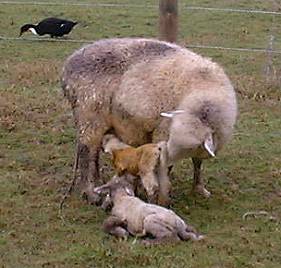 Lulu however, appears not to have any milk for her lambs.  Whatever her problem has been over the last week, her udder has not developed in the usual way for a ewe on the point of lambing.

Lulu is now outside my window as I write, looking after her lambs beautifully, but unable to provide them with enough of what they really want right now, lots of colostrum!  The plan now, is to let the lambs keep sucking whatever there is for them in Lulu's udder, because that's the only possible source of the colostrum they need at the moment (if another ewe lambs today, we'll take some from her for these two) and later I'll bottle-feed them, although I'll most likely leave them with Lulu, in the hope that she may begin producing at least some milk if they keep trying. 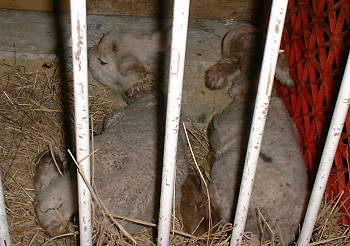 Here they are this evening, in an especially constructed pen beside the fireplace.  Lulu is lying against the door outside, out of the wind and rain, still not looking very well, but "holding".

Up at just after 4am this morning (well, why not?) to put Lulu's lambs back outside with her for a feed.  I wanted the lambs to get some more colostrum, if it was there, before they passed the magic 24 hour line, after which the antibodies in the colostrum would no longer be absorbed by their bodies.  They appeared to be getting something, little tails wiggling furiously and both stayed attached to the teats for longer than I expected they would, so there must have been something there to satisfy them.  Then I brought them back inside again, since it was so cold, but put them out again as it got light.

Later in the day, we treated Lulu with some veterinary supplies, hoping that would help her recover more quickly from her near-collapse and we investigated her udder again.  There appears to be more milk there than was evident yesterday and her ram lamb is a determined feeder, so I've left him with her and taken the ewe away.  The ewe lamb isn't looking quite as good now as she did yesterday, and isn't quite hungry enough, or prefers her mother too much to take a bottle successfully.  We think that for Lulu's sake, she'd be better with only one lamb to raise and since there's a strong possibility that there won't actually be enough milk to feed both lambs well, so I'll keep the ewe lamb to raise myself. 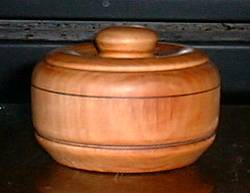