I've had to push the cows pretty hard, since we've had little grass growth.  That has meant that some of them have been literally pushing our boundaries and #349 must have pushed hard enough to pop herself under the very shoddy fence between us and the neighbour.  (The fence needs to be replaced and I hope that job can happen during this next summer.)  So there was our one lonely cow, away from all her friends, sitting on the wrong side of the hill until we went around the corner to bring her back this afternoon, after Stephan made yet another temporary repair to the insecure section of the fence.  She came out through a gateway near the mailbox in the picture and then Stephan and I walked her back around the corner, with a little detour into one driveway, and back into the paddock from which she had escaped. 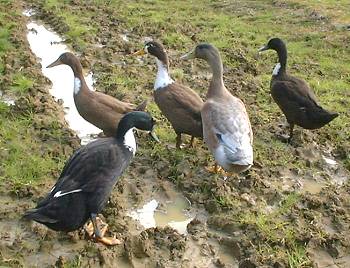 The ducklings have grown up and now spend their nights with the adult laying ducks and their days out free-ranging around in the paddocks.  We'll have to have a couple of duck casseroles shortly, since two are drakes and are not wanted for breeding.

I've docked and castrated most of the lambs in the paddock the day after they were born, but with a few days of rain, I have missed several, which are now far too quick on their feet for me to catch.  We took them up to the yards and did them there instead. 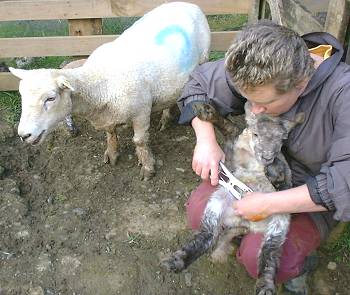 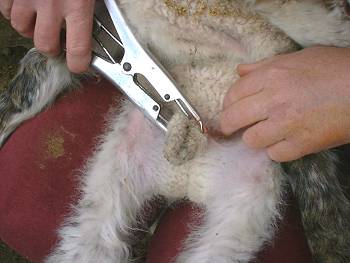 The rubber ring being carefully applied to the base of the scrotum, before the applicator is gently removed. 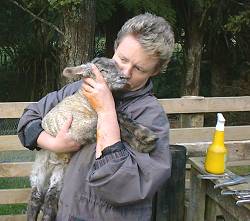 I generally apply iodine to their navels again (the first application was within a few hours after birth), which makes sure I double-check for any evidence of infection there.

Then of course I kiss them better before letting them go again.  They smell so lovely!
I carried the four lambs I had ringed down to the grassy area below the yards, so they could recover for a while before we moved them on to a fresh paddock.
The yet-to-lamb ewes will remain close to the house. 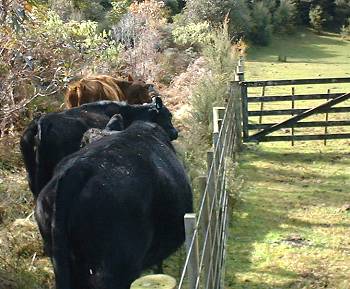 I was planning on an escape from the farm for a day, but then realised how ridiculous an idea that was.  Graham, from down the road, arrived back from a hunting walk last evening, saying that he thought there were probably some of our cows out in the forestry area again, so I went early this morning to investigate.

The floodgate appeared reasonably intact, although there were telltale bits of black hair on a couple of the rails.  I went wandering around the paddock, checking the other side of the boundary fence for tracks, and then saw the same three cows as last time, along the fence near the gate which leads back into our place.

Since it was a lovely day, I walked them in to the yards and gave them all another copper injection.

I did actually manage to escape for a day!  I went off and played chauffeur for Stephan's mother and her guests from England.  We drove over the Mangamuka Gorge, turned left into the Puketi Forest Road and went in to the walkway (a very nice boardwalk) through the edge of the Kauri Forest.  It was raining reasonably steadily, so I left the camera in the car with Muriel and Nora who really didn't want to get wet and Elisabeth and I strolled around the walk.  There were some really interesting trees, which I think are Neinei (Dracophyllum latifolium); they look a bit like Tī Kōuka, the Cabbage Tree, but even more like they've been cut out of a Dr Seuss story book. 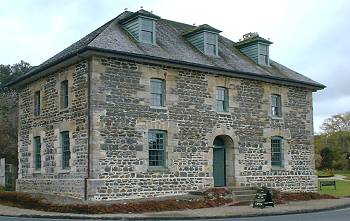 Then feeling rather damp, I drove us across to Kerikeri and down around by the basin and the oldest stone building in the country (built in 1832-36).  For visitors from England, such age is not terribly impressive, so we continued on to have some lunch in Paihia and then caught the ferry over to Russell.

We travelled through rain most of the way across the bay, so this view was rather a surprise by the time we arrived near the Russell wharf:

We wandered around for just over an hour, spending some time in the visitors' centre watching a video presentation on the history of the Bay of Islands, then caught the ferry back to Paihia again.

We arrived home to a roast beef dinner, prepared by Stephan.  During their few days' stay in the far north, Nora and Elisabeth were fed venison, swan, pork, beef and chicken!  Like many British visitors, they had mistakenly believed that all they'd get was lamb. 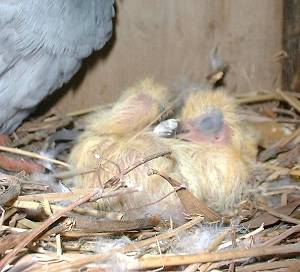 Stephan said he heard some interesting noises yesterday, from within the Pigeons' "loft" and investigated, discovering these two wee things.  They're awfully ugly! 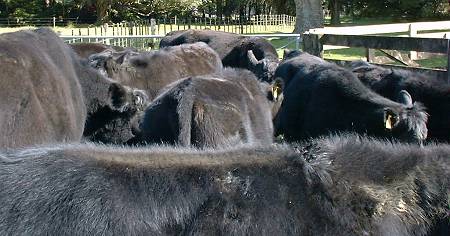 All the cattle need another copper shot, so now it's the turn of old Ivy, steer 356 and the young heifers.  The heifers are looking really good, most have been obviously cycling (no, cattle don't need bicycles) and I presume the others will either start very soon, or are doing so when I'm not looking. 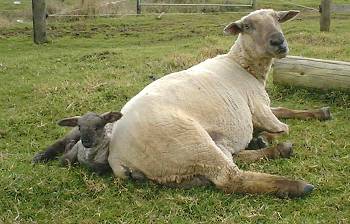 Minty, with her very cute ewe lamb.  The ram lamb is just out of the picture, fast asleep. 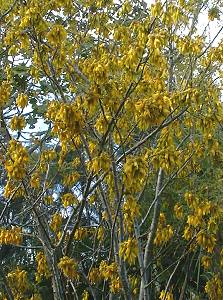 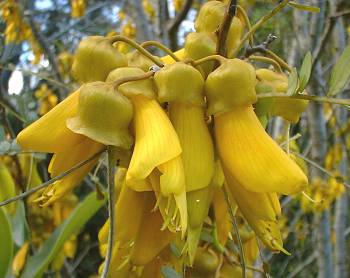 One of the last two ewes to lamb, Lulu's daughter, went into labour late this morning.  I was interested to keep an eye on her from a distance, since after both of her previous lambings, she has rejected one of her twins.  (Last year's reject was Dotty.)

I watched from within the house, taking these pictures through my binoculars.

12.16 pm - standing during a contraction: unusual in sheep.

For a change, this ewe has accepted both her lambs as her own and proceeded to feed them.  I don't know what her problem has been in past years, nor at what point she rejected her lambs, since I didn't observe their births.