After four weeks of incubation under a bantam hen, these two were ready to come on out into the world.  There is one problem with hens sitting on duck eggs: hens are dry, whereas ducks are often wet.  While the ducklings are developing, that's not too much of a problem, but to get out of the shell, the bird has to break through the membrane which surrounds it and then through the shell.  The shell is harder if it's not been regularly wet and the membrane, as soon as it is exposed to the air, dries out a lot faster than it would otherwise have done.  So, unless the duckling gets out pretty fast, it has a high chance of getting stuck as the membrane dries onto its body.  I helped the first of these two, the one on the right, to get the 'cap' off the shell and it pushed its way out and was fine.  The other was a bit later and so after removing some of the shell for it, I went to work for the day.  When I checked them on my return home, the second duckling was a cold damp limp body under the hay of the nest, apparently dead.  Over the next few hours, I gradually warmed it and got some sugary water into it and it revived to the point of peeping and holding its head up.  The next morning, after a night on the electric blanket and a 4am feed, it managed to sit upright on the floor on its own.  Now it's a very ordinary not-dead duckling. 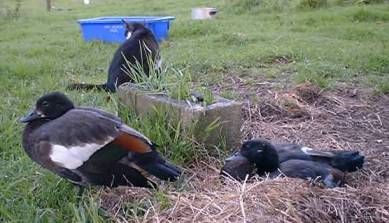 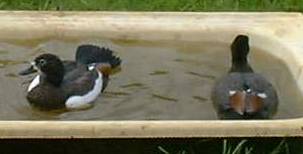 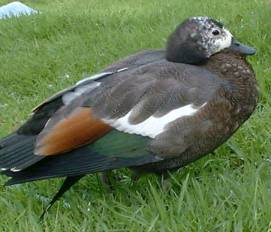 The progression of white over this duck's head has been quite quick, very much a daily change. The other (male) duck is now making some interesting sounds. Both spend quite a lot of time in the bath, often in the middle of the night. A few weeks ago I placed a plank against the bath as a ramp for them to climb up, which they fortunately quickly discovered, since they'd stopped letting me get near enough to them to lift them in. Both swim under the water for several seconds at a time, which is surprising considering the size of the bath relative to their size.

Seeing the two of them sitting out across the paddock from the house just now (Saturday afternoon) I called them and they flew over. Both looked a little out of control, but are back, safely, on the ground. That was the furthest I've seen them fly and possibly the furthest they've actually flown yet. I suspect they are probably heavier than they would have been in the wild, having access to the domestic birds' feed. It probably hasn't really occurred to them to fly, not having parents to encourage them skywards.

This is my latest "baby" who's demanding three feeds a day. Her mother was the hogget which had twins. I caught this one about six weeks ago, after both lambs began to look pretty hairy and thin and seemed to be eating grass for much more of the day than is usual for small lambs. I hoped that the ewe would manage to feed one lamb if I removed the other. This, the ewe lamb, recovered quite well and began to look like any fat sheep-baby. The ram-lamb continued to deteriorate, so I caught him, too, ten days later. He appeared to be coming right on milk and kindness, but with continuing scours he wouldn't always feed and he just got sicker and sicker. We shot him one evening, after he collapsed and couldn't hold himself up any longer. While there was life there seemed to be hope, but he just wasn't getting any better. 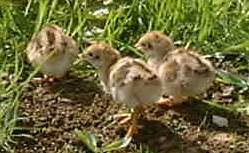 These are some of the latest batch of Pheasantams. Five hatched, all from the same hen and seem, so far, to be a little quieter than the previous ones. The older three are still around with their mother, although we don't see them very often as their range is far and wide! The two black ones still look pretty chickeny, but the light coloured one looks very much like a female pheasant. One day soon, if it ever stops raining, I shall attempt some pictures of them.