The week beginning 9th of August, 2003.
Saturday and Sunday

Not a lot of any great excitement happens at this time of the year.  I do the daily check of the pregnant ewes, sometime during the morning, and go and move the cows so they can look at a different view for a while.  The grass is growing very slowly.

Here are our two remaining "Pheasantams" - the result of a cross between a Pheasant and two bantam hens.  There was another black one and a couple of interestingly speckled one, but those have died or disappeared. 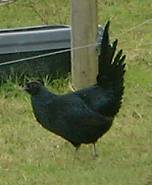 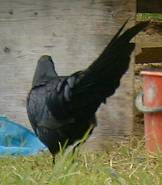 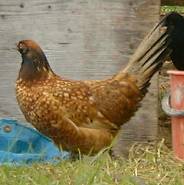 I think both of these are male: the brown one because of the colouring around the eyes and the occasional pheasant-like "crow", and the black one because of his activities with the hens!

I saw our Paradise Ducks (Ms Duck's parents) together on the ground near their nest tree, late this morning.  They had only one duckling with them, which seemed rather strange.  We went and investigated (interfered far more than we ought to have done, but I think they found each other again later) and confirmed that the duckling was a few days old, rather than just hatched from the nest.  I think the others were probably eaten on the day they hatched!  When I was working in the yards with the cattle a few days ago, there was a Paradise pair making a lot of noise up in the big Rata tree, which seemed odd.  I didn't get a chance to go and investigate further, but suspect that the ducklings were on the ground in that patch of bush becoming something's lunch - perhaps the stray cat, rats, stoats?  I wish I'd been able to check what the fuss was about.  They'll raise this one duckling, if they can keep it alive, or perhaps nest again if they fail.

I brought the heifers down from the hill over the road and weighed them all.  There are a couple of huge animals!  The largest of the three-years-old pregnant heifers weighed in at 642kg and the smallest at 483kg.  Those heifers will go back onto that hill and its reduced level of grass, for about the next three weeks, until I have to bring them down to draft out the earliest calvers.  Old Ivy and the three younger heifers will have the longest grass on the farm and the non-pregnant heifers will go back to whatever I can find them until the spring growth begins. 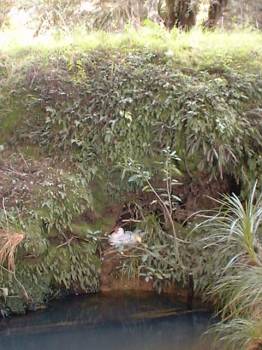 Some time, when the duck has gone off for a feed, I'll check on how many eggs she is incubating.  If a bantam goes clucky, I may take some of the eggs away, for safety.  As well as the risk of flooding, I've seen rats near this part of the river and there are some very large eels, so even if the ducklings hatch, they may not make it out of the river! 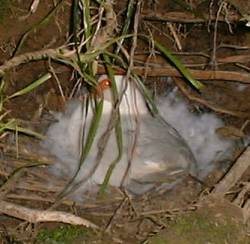 The female Muscovy duck has been spending most of her time lately, down by our bridge.  She and the male fly down into the river several times each day (in between his trips to harass the peacock).  Over the last few days, I've not noticed the female duck around as much, so suspected she might have a nest somewhere.  This afternoon I spotted her.

What a ridiculously silly location for a nest!  It doesn't take a lot of rain in the valley to raise the river the small distance from where it usually flows, as pictured, to where those nice warm eggs are resting in their nest of duck down.

Walking around the farm this afternoon, moving some of the animals to new paddocks, it struck me how green some places are looking!  A paddock which, a few days ago, looked mostly brown and hopeless, apart from a bit of green running through the middle, is suddenly green all over and in places that grass has attained respectable height!  The weather this week has been unseasonably fine and quite warm.  Whist other places only a few kilometers away have had lots of rain, we have remained mostly dry, which makes a very nice change.