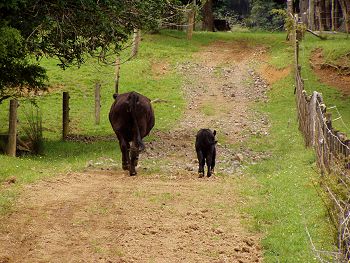 I rounded up the mob of 19 cows and 18 calves and moved them into Flat 5d, where some grass has grown.  These two were somewhere between the first few who realised what was happening and went quickly to the new paddock, and the stragglers still coming out of the Bush Flat. 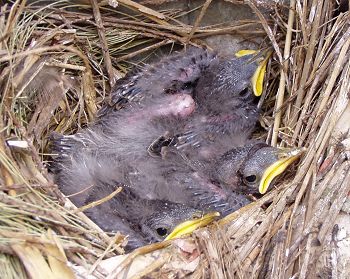 More feathers on the Starling chicks.  They grow so fast! 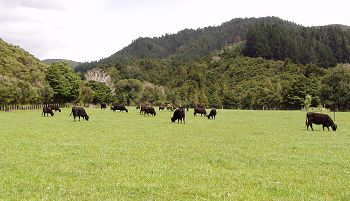 Thank goodness I sowed the Italian Rye seed earlier this year: it's really the only feed doing much growing. 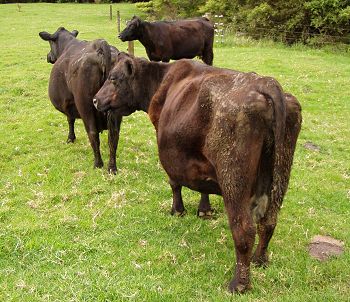 Ivy, closest to the camera, is losing condition, which is worrying.  I'm still giving her feed-nuts and access to as much grass as I can find.  Her passenger/s must be consuming more resources than she's able to replenish.  She's not due to calve for almost three weeks. 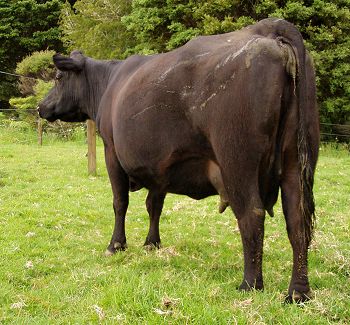 Isla.  About half an hour before this photo, I had been washing and then brushing out her tail, so she'd look lovely for a photograph.  I brushed all the muck off her back and she looked smooth and gorgeous.  Now look at her!  Messy madam. 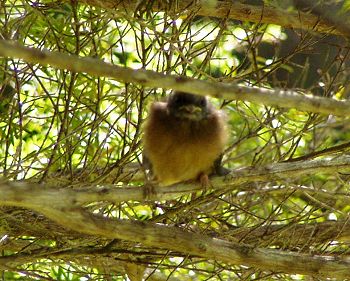 When out looking for some of the yearling heifers this afternoon, I heard some odd noises and saw two little fluffy birds sitting next to each other in a tree.  I wasn't sure what they were until a Piwakawaka - Fantail - parent came to feed them.  Getting a good photo proved rather difficult.  They were much lighter in colour than I expected and their tail feathers were only just visible, but they could flit about well enough from tree to tree, and down to the ground, constantly chirping.

I've taken on some temporary work, which is filling my time and demanding a great deal of attention.  It'll all be finished within three weeks, but in the mean time, it's not leaving me much time to do what I usually do!

Ivy's udder looks to be in early development - instead of being flacid and empty, it has begun to look a little fleshy.  Her due date is 1 December.

Many of the clean calf bottoms are dirty again, but they still look healthy enough.  The big problem is finding the cows and calves enough to eat: the weather is still cold and breezy and the grass is not moving much.

Both Isla and her sister, Imagen, have increasingly full udders, to the point that I began to think both might surprise me with calves a few days earlier than I expected.

Ivy, Isla and Imagen are still only three in number, so I moved them to the Pig paddock for the day's grazing and went out to a vet meeting.

Stephan spent the day on a bus on his way back from Auckland, where he's been for a couple of weeks.

I bought yet another pair of sunglasses.  Sunglasses are a necessary protection here and I wear them around all day, every day during the summer.  When the sun goes down and I'm still out working, I sometimes hang them on a fence wherever I am and sometime in the next few days I try to remember where I've put them.  By then they've probably fallen off the fence, probably because of a breeze or an animal nose, and I will quite possibly never see them again.  I consequently usually buy quite cheap sunglasses, having to treat them as a disposable item.  I paid a little more for these because they felt very comfortable, so shall attempt to keep track of them!