During this morning, Irene, whose spontaneous abortion progress has not been significant, with only a little more of the mummified placenta having appeared at her vulva, began to look a bit off-colour.  It would barely have been noticeable to a casual observer, but there were aspects of her behaviour which concerned me.  She spent more time than usual sitting down, and when down did not look like a relaxed cow, with her ears pricked backwards.  I have noticed that cows which are feeling just a bit unwell, look overly alert for some time before they show signs of depression as they feel sicker.

I'm not sure I can convincingly convey my strong empathetic sense of cow condition, but my apparent ability to pick up on how they're feeling is something I value highly.  It is not something I remember from my earlier years of farming, but has increased with time.  It is presumably a combination of various senses, and my being open to trusting something I can't logically explain.  Part of it will be an increasing literacy in "reading" bovine behaviour, which takes practice and experience; the rest is presumably intuition. 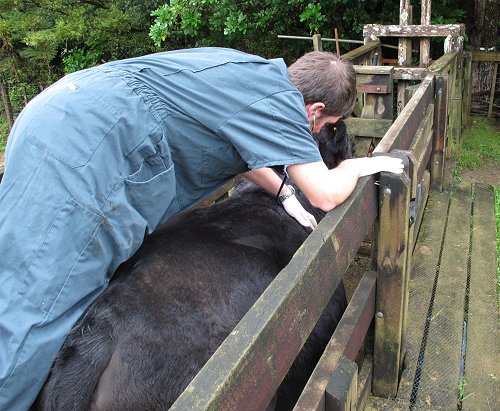 Because I'm going away tomorrow for a week, I decided it would be sensible to have a vet see Irene while she was still reasonably well, so that Stephan doesn't have to make a call on her condition in my absence.

This is Ed, Kaitaia Vets' very nice locum vet, examining Irene, checking that all her internal sounds are as expected.  Then he carefully extracted the remains of the calf and placenta, and gave her a couple of injections to arrest her probably developing sickness, and to make her feel immediately better so she gets on with eating normally, instead of sitting around feeling miserable.

I have placed pictures of the mummified placenta and calf on a separate page, in case some readers would prefer not to see them.

Ed said there was some evidence of a uterine infection, which was probably just beginning to make her feel unwell.

The size and development of the mummified calf suggests it died very early in Irene's second trimester, i.e. probably just after 90 days of gestation.

This afternoon I caught the plane to Auckland with Beryl (Kaitaia Vets CEO) and Greg (fellow Board member) for the Association of Rural Veterinary Practices (ARVP) annual conference.  We met this year in Auckland, our hosts the Franklin Veterinary Club. 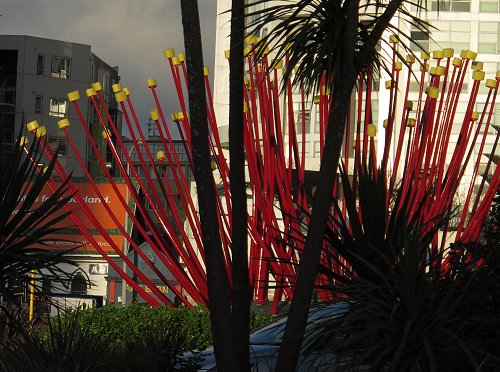 I think this is very cool: a sculpture at the top of Nelson Street, as we came off the motorway.  I don't know how long it has been here, nor whether it is the first replacement of the earlier curved sculpture which, I think I recall, was placed without any formal approval on this site many years ago.

The colour and proportions of this sculpture instantly shout "Pohutukawa", despite its gigantic size.

The ARVP conferences often have a field-trip included in the programme and part of this afternoon's trip was obviously based on the assumption that the entire population of this country is excited by a game involving a lot of sweaty blokes chasing a little leather ball around a paddock; an assumption which is trumpeted everywhere, but quite wrong. 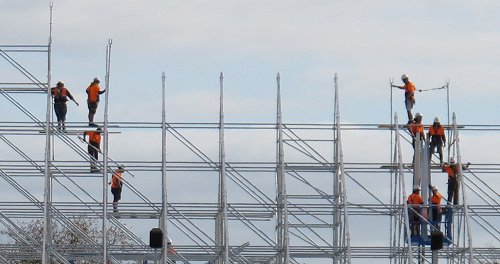 We went to Eden Park, which is being readied for some huge number of people to attend various events later in the year.  I thought these guys at the end of the arena made an interestingly arty sort of photo. 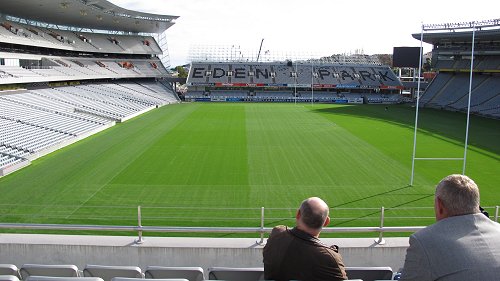 The place is huge.  I suspect this was something like a religious place visit for some of our group. 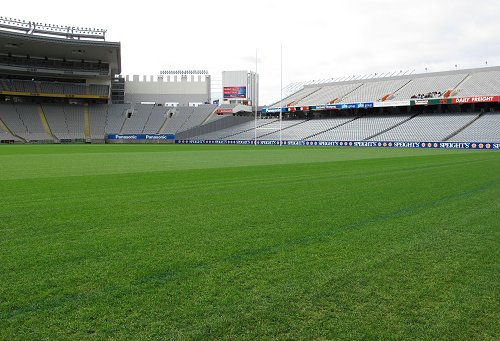 I asked our guide how many kilograms of dry matter per hectare this field produces, but he said he didn't know, and would we please not walk out on it.  I suggested it would look far better with a mob of cattle or sheep. 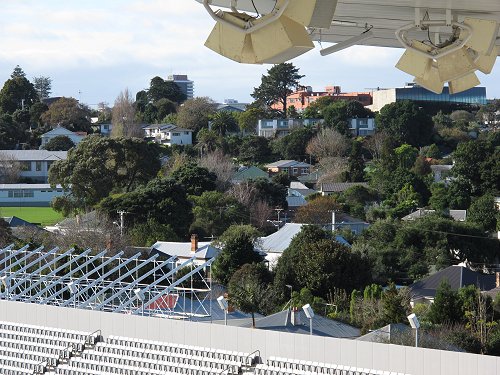 The evening's Conference dinner was very enjoyable.  I managed to find people to sit with who made entertaining dinner conversation, the food was fabulous, and after a while the after-dinner speaker rose to his feet, with his characteristically cheery expression: Tim Shadbolt (I don't care where, as long as I'm Mayor!)  He spoke to our conference in Invercargill, when he opened the proceedings; but here, in an evening setting, he was even funnier.

At the end of the conference I caught a bus from Queen Street up to Ponsonby Road to The Women's Bookshop.  A week or so ago I received a "coming events" email from Carole, who owns and runs the shop, and seeing there was to be an event this evening, planned that I'd go, since I was so close.

I knew the visiting author was Dr Pamela Stephenson-Connolly, but it hadn't really occurred to me that she was there specifically because she's recently published a book; I just went because I like going to live things with lots of women!  The event was held in the small shop itself (I think I had visions of there being another space upstairs for such use - I may be remembering events at the old shop location in Dominion Road, where I think that was the case), and there was standing room only!  But the wine and nibbles were lovely and I met a couple of really nice women I had probably never met before.  It turns out that a really good line to initiate conversation, if the other person is an equally approachable party, is: "Hi Shae!...?... oh, I'm sorry, I thought you were someone I haven't seen for ages!"  It amused me that I'd just been reading a book spine title, "Overcoming Social Anxiety and Shyness".

At the end of the evening, on a whim I bought Pamela Stephenson's book and had it signed by the author herself!

I went shopping.  I've rarely been much of a shopper, finding I haven't the patience for trying clothes on and deciding what feels or looks as I'd like; but today I had little else planned other than doing just that.  Here follows the story of an uncertain shopper.

My particular intention was to buy myself a leather jacket.  I've never bought one before and had decided I'd like to have one for my 45th birthday, but failed to find anywhere to look last year.  After checking the yellow pages directory and doing an internet search, this morning I headed off down Queen Street, planning to check out one particular store, before going out of the central city to another I'd found listed.

The smell, when I walked into the small shop, was delicious.  Leather smells so rich.

The woman who owns the store, Diane, asked me what I was looking for and began finding jackets of the right size for me to try.  At one point I spotted a price tag and nearly fell over: it was more than twice my imagined budget.  But by that time I'd already tried on something which felt and looked exactly right, so I carried on regardless.  I didn't really think I'd buy anything, but it was lovely trying them on.

One thing led to another, and my will began to soften.  I told Diane I wasn't sure I could really make such a purchase immediately - well I could, but should I ?

We talked about price for a little while and Diane suggested a reduction which produced a number which was mysteriously close to the amount recently deposited into our account after Bella went to the works (i.e. a fair price for a heifer, a ridiculous sum for a piece of clothing) and I said I'd have to go and sit down with a cup of coffee for a while before I could possibly decide!

Over coffee I texted Stephan and Jude for their opinions, but neither instantly replied.

I walked back through the arcade and up the stairs to the toilets, where I saw three older women enter the two-cubicle room ahead of me, so I waited outside.  One came out and we chatted for a moment and I told her I was trying to make a difficult decision - and continued the conversation with the second woman, and then the third when she emerged.  They were delightful.  I love that spontaneous sort of contact with friendly people.  They were obviously all out for a companionable morning together and were relaxed enough to stop and talk.

I went back downstairs, looked in a kitchen shop for a few minutes and as I came out, the three women, passing the door, asked me how I'd got on?  They agreed to come with me, as an "approval committee" back into the leather shop!  So I thank those lovely women, whose names I asked but promptly forgot again, for their enthusiasm and willingness to enter into the fun of my morning.

I put the jacket back on, walked around for a while, out into the arcade and into a neighbouring bridal shop which had its own huge mirror on the wall - one must of course look at things in different settings.  I asked the bridal shop woman how much one of her dresses would cost, and her answer contributed to my decision.  If many women can justify spending over $1,500 on a pretty dress for one day's wear, I could buy a jacket!  So I did.

Being of frugal habit, I spent the rest of the day coming up with further justifications for spending an obscene amount of money on such a purchase.  The best one I could find was the celebration of the receipt of payment for my 40th column in NZ Lifestyle Block Magazine this week.

As I walked back up Queen Street I received two texts: from Jude, "Buy it!" and from Stephan, "Why not?"

I spent an enjoyable day bussing around Auckland; from Parnell to town, buying a one-day bus pass from the driver when it was 9am (they're not available until then, but he'd kindly let me travel until it was that time, without buying a ticket until I could get the concession).  From Albert Street I went to Takapuna, on the North Shore, and back later in the afternoon, and then on to Newmarket for a while.

My sister Rachel and I went out for what has become our customary annual dinner for her birthday, since I've been in Auckland at this time of year repeatedly.  We went to Non Solo Pizza just down the road from Rachel's new flat.

An early morning airport shuttle van picked me up to go to the Airport for a flight to Whangarei, where Jill collected me and Stephan arrived in time for lunch.  Jill had to go out to an engagement in the evening and in a fit of guilt at deserting us, she made a generous contribution to dinner for two at à Deco Restaurant.  We had a particularly pleasant evening.