We had a nice jaunt planned, a trip to the Bay of Islands to stay with Stephan's brother, Edwin, and Sue; but I woke up feeling unwell, so we postponed that idea for another time.

Recently I emailed an entry to The Northland Age, our local rag, for a draw for tickets to see the New Zealand Symphony Orchestra in concert in Kerikeri.  About a week later I received a phone call to say we'd won them!  Unfortunately The Northland Age then published the full names of the winners, us and another couple of people, in the paper earlier this week, alerting all and sundry to our intended absence from home this evening!  Helpful.

Feeling better than yesterday, we decided we'd go, despite the probable queue of burglars at the bottom of the road (they'd be sorely disappointed in any case).

The concert was at the Turner Centre in Kerikeri, where neither of us had been before, and we enjoyed it very much.  I still remember the first (and possibly only other) time I saw the NZSO, aged about ten, in the Kaitaia Community Centre when it was first built.

The Turner Centre's page about the concert has been removed but here is the relevant content, happily saved before they took it down (I have attempted to find correct attribution for the photos but have so far failed):

A sumptuous Sunday in Kerikeri with the New Zealand Symphony Orchestra. 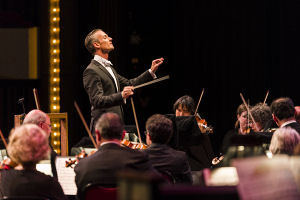 The New Zealand Symphony Orchestra is bringing one of the greatest pieces of Spanish music ever written and a masterpiece by Béla Bartók, a giant of 20th century music, to Kerikeri on Sunday 23 July.

The NZSO will be under the baton of Britain's Alexander Shelley, one of the most sought-after conductors in the world today.

The intoxicating Concierto de Aranjuez is Rodrigo's best known work and is synonymous with Spanish music. Many people instantly recognise it, especially the second movement, even if they have not known its title or the composer.

It has been covered by many artists, including Miles Davis, incorporated into music by the likes of Led Zeppelin and Deep Purple and used in film soundtracks, including the movie 'Brassed Off'. 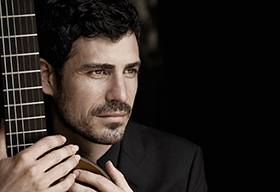 The NZSO's performance of Concierto de Aranjuez will be accompanied by star Spanish guitarist Pablo Sáinz Villegas, who has worked with the world's top orchestras and performed in the presence of the Dalai Lama and Spain's Royal Family. His many achievements include the world premiere of the first guitar piece written by Oscar-winning composer John Williams.

Our seats were about five rows back from the front, which was a fantastic distance for seeing the guitarist in action but if we go there again, we'll try for seats a few rows back, because then one might see the players further back in the orchestra more clearly.  Attending a live orchestral concert reminded us both how much more moving the real experience is than listening to recorded music.  We must seek opportunities to do this again!

A week or so later we were able to enjoy the concert again on Radio NZ Concert, recorded when the NZSO performed the following week in Wellington.  It was lovely listening and knowing how it would all have appeared. 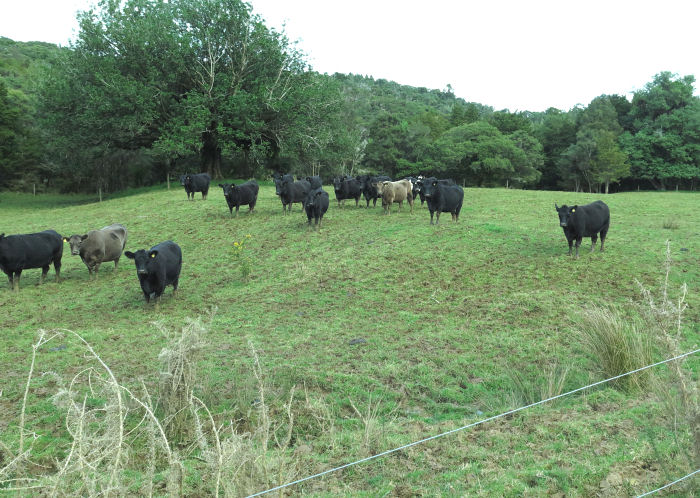 We've had a week of mild temperatures so the grass had grown a little, but the cows still eat it as quickly as it does.

Body condition is still looking pretty good, although a few thinner cows are beginning to show they've been struggling a bit.  At times like this I wish we had a barn full of hay; but we don't. 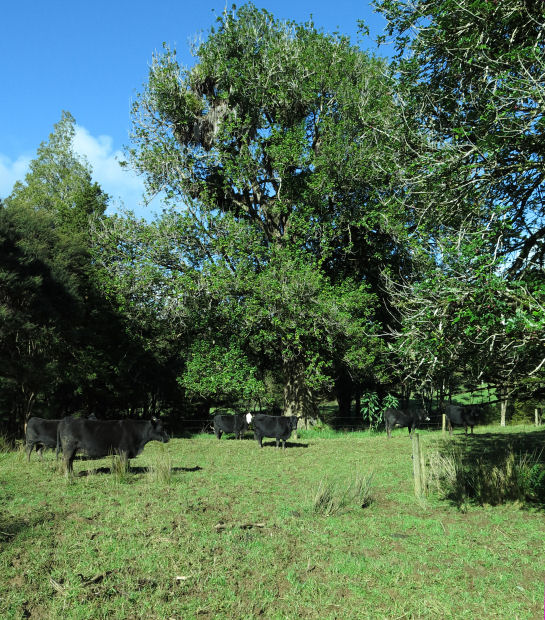 What a gloriously lovely day!

Now in the Swamp East paddock, half the cows were standing, waiting for something better to happen ... 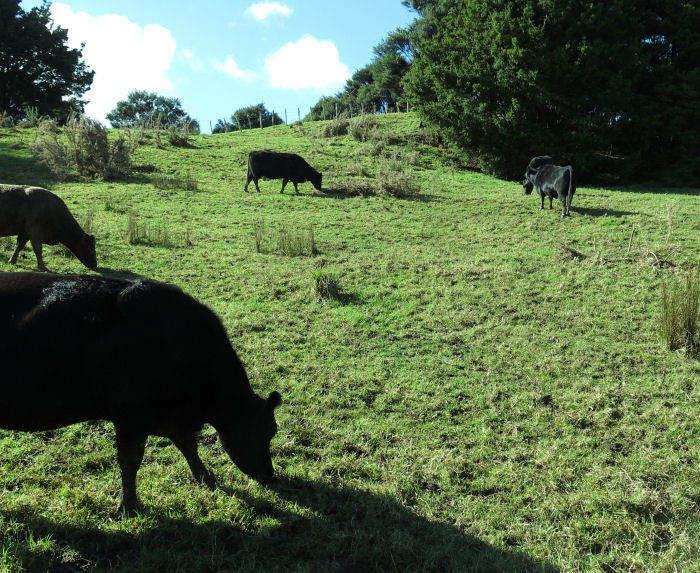 ... but the other half were still up on the eastern slope, grazing.

By this stage of the winter, they've realised there's not much to eat and just get on with eating what there is, instead of waiting for something better.

By my careful and reasonably conservative calculations last autumn, there should be enough for everyone to eat through the winter.  But the wet has a strongly negative impact because so much of the grass gets trodden into the mud as the cattle move around their paddocks.  On firm ground, the grass over which they travel during a first pass around the paddock, can be eaten later; but when the ground is sodden, the grass they've previously walked on is no longer edible, being pressed down into the mud and often submerged in watery foot-holes. 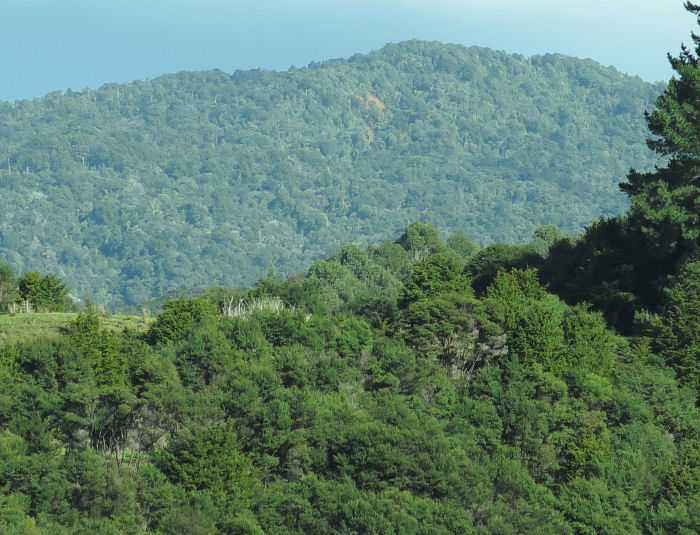 Over in the Herekino Forest, a big slip has appeared on a hill face.  I find it frightening that big areas of long-established forest can suddenly slide off the surface of the earth!  It's obviously very steep up there but those trees had grown where they were for hundreds of years.

We have been noticing how much muddier the Waikawa stream has been of late and perhaps that slip is the cause.  The silt from the slip up behind us has taken years to come down the Taheke stream, so a slip of this size could presumably muddy the Waikawa's waters for a long time to come.

In this photo the pine branches to the right are our trees in the Pines paddock, the green grass on the left is the top of the Small Hill; the middle-distance tree-tops are Eucalyptus trees on the neighbouring property. 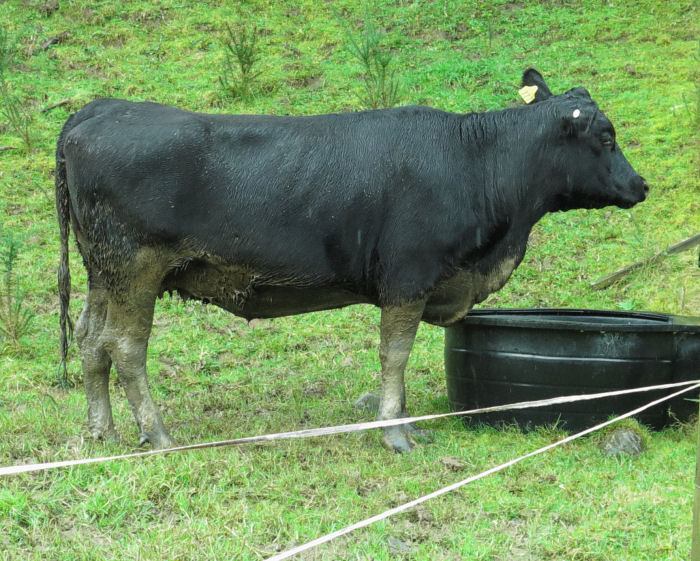 Jet 777.  I looked at her for a while, trying to work out what sort of condition she's really in.  When she was a youngster, between about nine and twelve months, she looked quite dreadful, despite a very good start to her life and I worried that she would not fulfil my high expectations of her as a daughter of her lovely mother, grey 607.  I hoped she was just going through a growth spurt at the time, which made her look thinner than the others because she'd grown suddenly tall.

But now, as a R3 heifer approaching her second calving, she's in sufficiently good condition and has, I hope, overcome whatever may have ailed her for a while earlier.

She is not the best-looking animal in the world but she is still a favourite and I look forward to seeing what she does in the seasons to come.  Her daughter, 811, is in the young mob, and I'm waiting to see how well she grows out.

777 has a wet, muddy, undercarriage because she's in the Pines paddock, with its yet-unfenced wetland down the middle.  Hopefully, finances and fencer allowing, we'll get that issue sorted this coming summer.  Various people have said 'put a drain down the middle' but that's not how we roll! 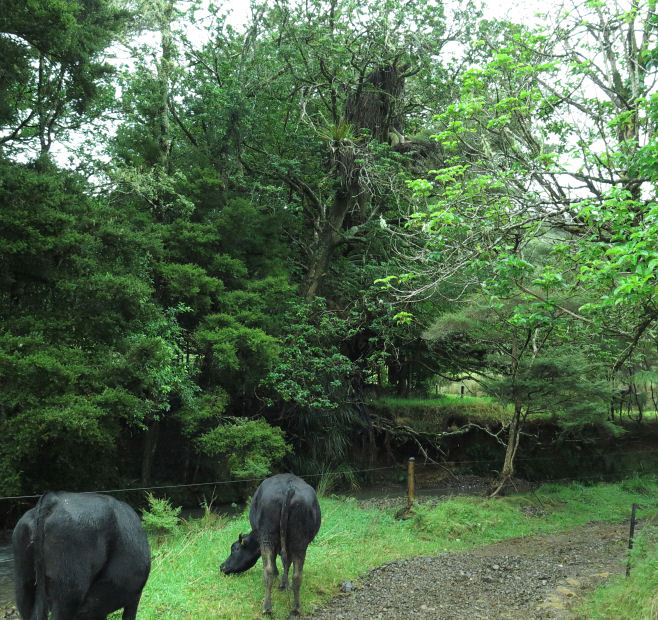 I took Jet and her mates out and down the lanes to the little Camp paddock and then down across the stream to the Tank.  That leaning Puriri is worrying me!  Some of its roots have been left hanging in the breeze since the big floods earlier this year washed away some of the bank on that side of the stream.  It is quite possible that it isn't leaning any more than it did before but with less support on this side, I fear it may be falling over. 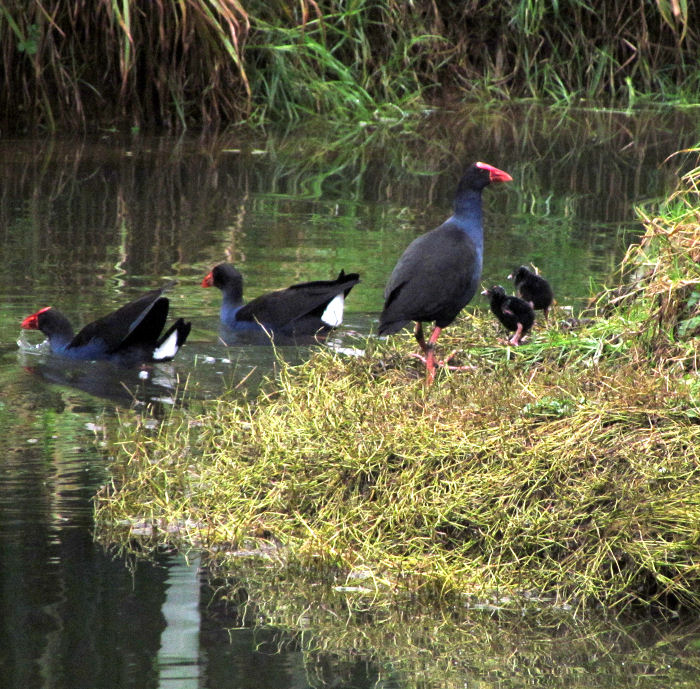 All that wing-flapping Pukeko sex last month has resulted in two chicks on the island in the pond.  I think they're early this year - looking back to last year, they were only mating a week before this, so the first chicks would have appeared in August, which is their usual breeding season.

There are four or five adults rearing these two, two of them repeatedly swimming across the pond to go and fetch something else to feed the chicks - mostly Kikuyu and other plants, which they chop into bits and offer to the chicks.  The adults often fly the short distance but perhaps that startles the chicks; they swim very well.