The weeks beginning the 28th of January and 4th of February 2006.
Sunday the 29th and Monday the 30th 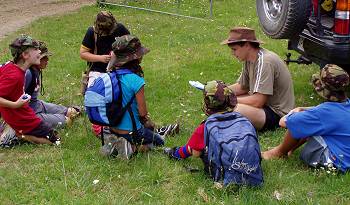 Stephan's nephew, Mathew, brought his sons and a number of their friends out to the farm today, to send them on an adventure through an uncharted wilderness - or so they were to pretend.  The six of them ranged in age from about eight to 11, I think and they seemed pretty disinclined to sit quietly for instructions, obviously being very keen to get going! 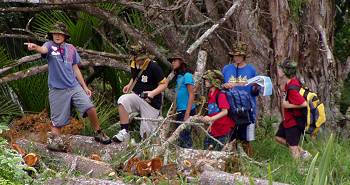 They had a copy of one of my aerial farm photographs on which they were to map the river they were to follow, including important landmarks, best places for crossing and any hazards they encountered along the way.  Mathew, Simon and Miriam followed at a discrete distance, dropping in supplies at various points and setting up adventures ahead of the children. 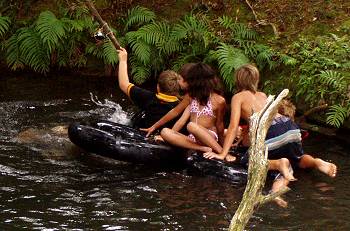 There were killer snakes living in the river, so to aid the native inhabitants a dam had to be built to stop the snakes from coming upstream.  In gratitude for this good work, the inhabitants of the riverbank had left supplies for the adventurers, which could only be reached by building a raft and collecting them from where they were suspended over the water.

The adventurers then reverted to child status again and spent ages romping in the swimming hole, before continuing on upstream.

There was some blind-fold rope-following on some part of the trail, cliff-climbing, blackberry-picking and all sorts of fun I didn't see.  The adventurers spent the night camping near the swimming hole and then went off and spent the morning exploring some more.  I waved them off just after noon, all looking very tired and ready to go home!

Thursday the 2nd of February 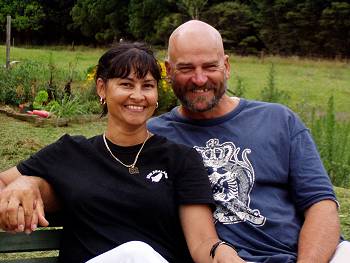 We've met some lovely people through this website.  Allie and Bloo arrived from Australia last week and have spent quite a bit of time with us during their holiday, this evening coming over for drinks and dinner and not running away when I pointed the camera at them, so here they are!

I came in from out on the farm this afternoon and was surprised to find this little family!  I disposed of the two Muscovy drakes some time ago, but perhaps it was less than five weeks?  Having raised a dozen of the ducklings a while ago and then having lost nine of them to hungry hawks, I'm just not going to bother with this lot.  If they survive, which is unlikely, we'll eat them.  In the mean time, they are very cute! 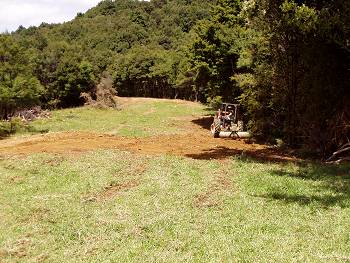 Stephan has been doing some earthworks out the back in preparation for completing the lane to the north side of the back of the farm.  At the moment it just stops half-way and has been awaiting completion, which has depended on the weather being right and time being available for the work.  We also needed to think about how we would construct it.  The lane fencing will effectively prevent the cattle from entering another stretch of the river, which is something we are aiming to do along its greater length in the long term.  There is a triangle of land on the other side of the river which will be cut off by the lane, so we're going to change the boundary of the back paddock to include that bit. 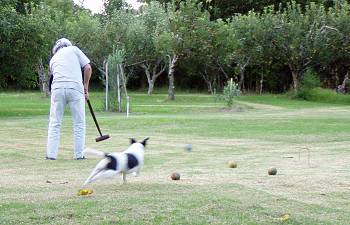 We have some very nice friends with a very large area of lawn upon which they occasionally invite us to join them in a game of croquet, and this evening a game was arranged, with wine during the game and dinner afterwards.  This evening's game was made slightly ridiculous by the presence of a small dog (belonging to some travelling, absent friends of our hosts) which thought moving croquet balls were to be caught and carried off!  Gary's blue ball, in particular, appealed, so every time Gary's turn came around the dog was off!

A couple of weeks ago I wrote to the distributors of the Bulling Beacon heat indicators which I use on the cows.  The materials used in the patches is different this year from that in the old ones I'm still using from last year, making them much easier to apply, but about half of them have failed - the plastic envelopes have split away from the material patches, so the dye tubes have fallen out!  That failure has meant I've had to replace them with new ones, often before the cows have come on heat, so it's been a rather costly (in time in particular) exercise.  My email was forwarded to the marketing manager of the manufacturer who said he was due to come to New Zealand and could he please come and visit while he was here?  This morning he arrived, after the four-hour trip from Auckland, looked at the collection of failed patches I've been saving from the backs of the cows, and looked around some of the cattle and my system in general, then off he went again, on his way to Hamilton, another five and a half hours driving!  Perhaps if one is Australian, huge driving feats are of no consequence!

I have been very impressed by the company's willingness to investigate the problem.  My faulty product will be replaced, of course, but more importantly the direct contact between client and manufacturer potentially leads to ongoing improvement in a very useful product.  *

A Putangitangi female (Paradise Duck) just flew overhead and I am reminded that they are noticeably absent at this time of the year, as the adults have all been away moulting, spending the time on large water bodies while their new feathers grow in.  The latest clutches of newly fledged ducklings were here for a while after their parents had gone away, but they too have been absent for a few weeks.

The insemination cows are quietly sitting in the paddock outside my window, #26 is following Ida 18 around the paddock across the flats as she finally comes on heat.  The air is cooler after many days of stifling heat and humidity and the ragwort is out there, waiting for me to hunt it down and bag it!  Stephan has sprayed some areas this year, but there's been a lot of wind on days he might otherwise have sprayed, or rain has threatened, so much of the control has been left to me with the granule "plonker" and secateurs and bags to collect flowers and already seeding heads. 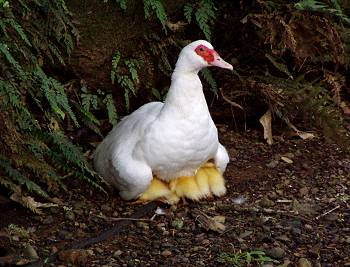 The Muscovy duck appears to be keeping track of her ducklings very well.  She has lost one of the ten, but the others all look quite happy and healthy, and if she loses track of a few, she makes sure she finds them again before moving on to somewhere else.  This little "beach" in the river bed seems to be her preferred night-time resting place.

Ivy 556, the 16½ year old toothless wonder-cow, came on heat late last night.  I'd wondered if she would, because she's really quite thin again.  Her calf, now registered with the Angus Association as Virago Ace 38 AB, is growing at a very satisfactory 1.5kg/day, from birth until now.

I had one straw left of Te Rangitumau on Target 42, which I last used on Ivy four years ago, producing the twins, Ingrid 17 and Ida 18.  Their EBVs aren't the greatest, but the animals are very pleasing, so I thought it worth repeating that particular mating.